Origin Stories
There are many mornings when I cannot help but express my gratitude that I did not come of age in this current generation. As a father of two Millennials and a teacher of hundreds more, I know that ... 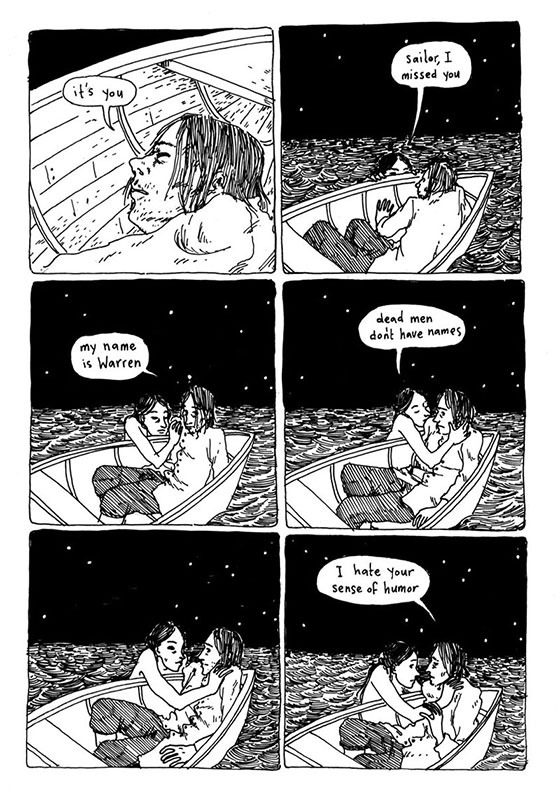 There are many mornings when I cannot help but express my gratitude that I did not come of age in this current generation. As a father of two Millennials and a teacher of hundreds more, I know that any one of the unprecedented hurdles they face—from the grim face of global extinction to the savageries of social media—would have left my 20-year-old self babbling in a padded cell. That they also have to bear the charge (familiar to every rising generation since the dawn of consumer capitalism) of being narcissistic and navel-gazing seems especially unfair.

With the increasing visibility of diary comics and long-form autobiographical comics in the 21st century, we see a widespread critical assumption that young cartoonists are only capable of telling stories about themselves.1 The best autobiographical comics by 20-something cartoonists are their own justification, but too often unacknowledged is the fact that much of the best work produced by the rising generation of cartoonists draws its energy from very different wellsprings. Here I want to focus on the recent debut work of three young cartoonists that are inspired not by the inward gaze but instead by myth, legend, and a pure, unadulterated love of visual storytelling as an end in itself.

Julia Gfrörer is a talented young cartoonist whose delicate linework brings to her gothic storytelling a fragile sensuality and somber humor. In her young career she has produced some splendid short work and mini-comics, but it is her debut novella, Black is the Color, that has brought her the attention she deserves.2 Set in the 17th century, Black is the Color tells the tale of a young sailor set adrift with a dying companion by masters eager to preserve their rations for a long trip home. And in truth, that is the story: our protagonist, Warren, spends the book drifting at sea in the small boat in which he has been cast off, exposed to the elements, slowly dying.

From the start, we cannot help but like Warren for calling out the hypocrisy of the ships’ masters, who have convinced themselves that by not murdering him outright they are engaged in an act of mercy. And in the face of his inevitable end, Warren will prove our affections warranted as he maintains his passion for the unknown up to the very end. But Warren also remains a stranger to us, his seafaring life and death unfamiliar to our 21st-century rhythms, his diction and aspirations as alien as can be imagined.

If the sailors are curious, foreign creatures, we are introduced to another cast of characters who prove to be far more familiar: young women gossiping about shows, clubs, and love while they watch, with bemused indifference, a ship sink in a ferocious storm. If not for the fact that these young folks are all mermaids and mermen, we might well imagine we were overseeing a conversation at a Brooklyn bar on a Friday night.

Try as they might to love the sailors drowning  in the wake of the shipwreck , they are as alien from them as we are, and we, despite our lack of scales and a tails, are closer to the merfolk and their talk than to the romantic Warren. Like the mermaid who shares his final days with him, we can watch his death only from a distance.

The mermaids serve as an internal audience, commenting on and briefly connecting—emotionally and erotically—with the sailors, even as they remain safely ensconced in their own community, always knowing that they will and must move on—to other romances, other entertainments. Our own relationship to the tragedy unfolding in this short legend is reflected back to us in their commentary, at once banal and witty. Our time with Warren, like theirs, will be as brief; indeed, the novella form—the book is only 72 pages long—combined with the accessibility of finely etched panels allows a first reading to be a matter of an hour. When we return for a second read, as the shade of Warren beckons us to do, it is because we, like at least one of our mermaid counterparts, recognize that this young man’s bravery and beauty in the face of death might in fact be something worth thinking about.

Isabel Greenberg’s Encyclopedia of Early Earth is a dazzling, outsized celebration of the power and pleasures of visual storytelling, and a remarkable debut volume from a 25-year-old English cartoonist. Framed by the quest of a storyteller who journeys from the northern floes in search of a lost piece of his soul, the volume ends up delivering a lush array of tales fanning out across the wide world of Greenberg’s imagined Early Earth. These stories feel at once deeply familiar and delightfully askew—somehow more believable, more potent for being so reinvented. 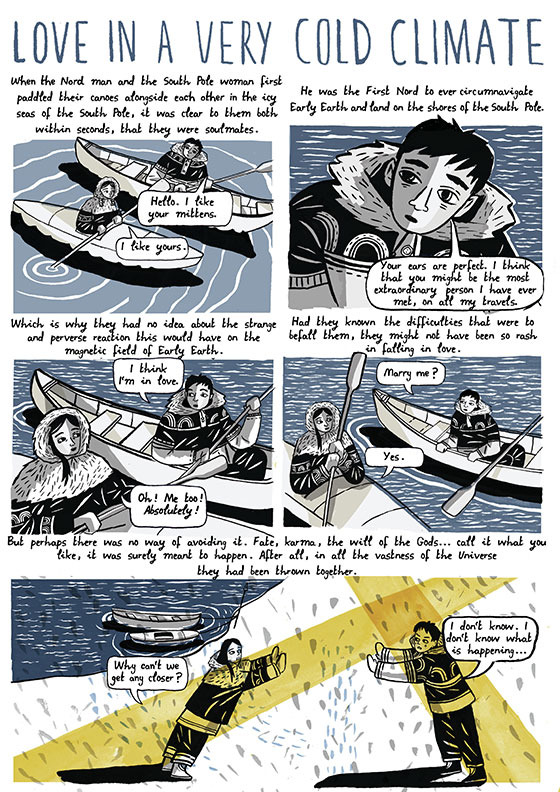 Whereas Gfrörer uses the slim novella format to marvelous effect in Black is the Color as a way of commenting on the fleeting nature of our attention to the lives (and stories) of others, Greenberg’s Encyclopedia is a celebration of the ways storytelling binds us across borders, cultures, and eons in ways we cannot predict or hope to fully comprehend. And where Black is the Color was an exercise in narrative restraint, the Encyclopedia of Early Earth is a Baroque monument to the limitlessness of legend. And yet as different as these two books are—both visually and narratively—they both testify to ways in which stories make us human in the face of the infinite darkness.

Greenberg’s Encyclopedia of Early Earth weaves together myths from many ages and cultures—adding an equal number from Greenberg’s own rich imagination—into a complex tapestry that is somehow at once both an elaborate game of telephone and a dizzying mise en abyme. The book displays simultaneously an unadulterated youthful pleasure in creation and a sophisticated understanding of the power of narrative. Its encyclopedic ambitions, proclaimed in the title, suggests an impossible dream of bringing lost worlds into active dialogue with our own, of bridging through the sharing of stories and the acknowledgement of the stories we already share without knowing it, all that divides us, culturally and historically. This is the kind of book one wishes would not end, if only because it serves to remind us how blissful it would be to live entirely in a world made up of the legends told by masters like Greenberg’s Storyteller—and by Greenberg herself. Fortunately, with Greenberg at the very beginning of a career with the promise of many stories yet to come, that is a fantasy we can indulge.

Both Gfrörer and Greenberg are working through myths and legends of the past, seeking to make them newly productive in the 21st century. Cole Closser’s debut graphic novel Little Tommy Lost: Book One finds its inspiration not in the legends of 17th-century sailors or ancient myth, but in the serial storytelling of the early 20th-century comic strip. In a series of “daily” black and white and “Sunday” color comics—and beautifully packaged by Koyama Press—Little Tommy Lost might at first be mistaken for another entry in the remarkable run of classic newspaper comic strips being represented in archival editions. And that is clearly exactly what Closser is hoping for. The daily pages take their inspiration in the great melodrama and adventure strips of the early decades of the century, from Happy Hooligan to Little Orphan Annie, while the “Sunday” strips pay homage to some of the great visual artists of the medium, from Winsor McCay’s Little Nemo to Frank King’s Gasoline Alley Sundays. 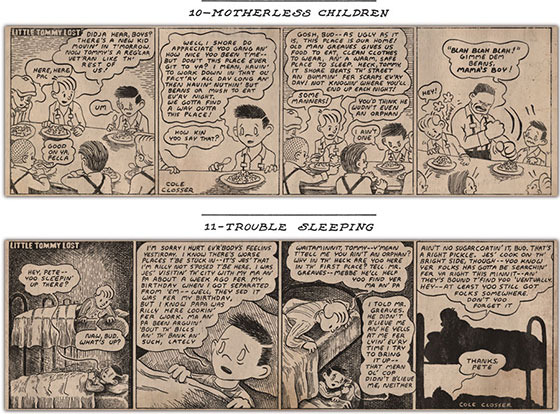 But this slim book is not simply an homage of a young cartoonist expressing his love for a bygone era of comics art. Closser takes very seriously this form of serial storytelling, one that in our post-print culture seems to young readers just as antiquated and “lost” as the fireside legends of Greenberg’s Encyclopedia. In the idioms and rhythms of this open-ended serial storytelling that first came to life in the pages of the newspaper comic strip in the 1910s, Closser recovers something vital.

By the end of this first volume, Tommy has discovered strength he never knew he possessed, friendship where he least expected it, and villainy and corruption at the hands of authority and institutions of power. If this sounds like the stuff of melodrama, it is. If it sounds like the stuff of legend, it is that too. But perhaps it is also an allegory for what it is to be a young artist in this 21st-century world, in search of nourishment, a home, and a community. Unlike Gfrörer and Greenberg, who seem already to know how they wish to direct the flame they have carried over from myths and legends past, Closser’s Little Tommy ends its first volume with much unresolved, both for our hero and for our cartoonist. But there is talent and passion enough here to convince me that both will be worth following as they find their long way home. These three debut works alone should assuage any doubts as to the future of graphic storytelling in the custody of a new generation of cartoonists, and they serve as a welcome response to those who might worry over the range of “Generation Facebook”’s gaze. Indeed, as Johnny Ryan suggests in a 2006 strip entitled “Every Autobiographical Comic Ever,”3 it is the previous generation of cartoonists who continue to represent the gold standard for true masturbatory self-indulgence.

Black is the Color