The Big Picture: Confronting Manhood after Trump
If it were fiction, it would have been dismissed as preposterous. America ... 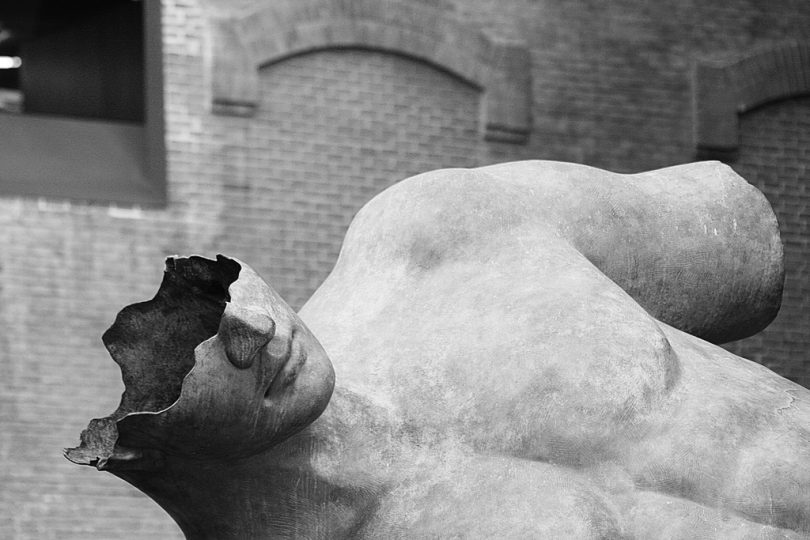 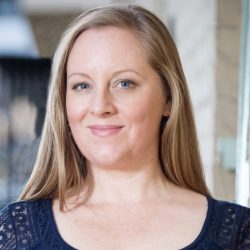 If it were fiction, it would have been dismissed as preposterous. America elected a grotesque, slobbering id to the highest office of the most powerful country in the world: a thundering narcissist who, without irony, describes himself as “the world’s greatest person.”1 And central to his persona is a vulgar and vindictive masculinity; not cold and calculating, as is his vice president’s, but hot and festering, like an open wound.

Presidential campaigns are always referendums on what “good” and “real” men are like, but Trump’s unabashed sexism and incapacity for mortification is like nothing anyone alive has seen before.2 On the campaign trail, he threw emasculating barbs at supposedly lesser men, spewed sexist insults at uppity women, sexually objectified underage girls, and coveted the totalitarian power of dictators.3 He bragged about pussies and penis size and how he’d never rape an ugly woman. Instead of cratering, his campaign soared.

There’s a substantial proportion of men, and women too, who are willing to tolerate this vile enactment of masculinity, mixed (as it usually is) with racism, homophobia, religious hatred, and nationalism. There are also those who have long been waiting, yearning, lusting for someone like him. To those on Breitbart, 4Chan, and /r/The_Donald; to those high on toxic right-wing radio; to those hiding in plain sight throughout our society, Trump emerged from the Republican presidential primary not just a candidate, but a champion: a hero to those mostly white men who bristle at the idea of sharing America’s prosperity with those whom they see as inferior.4 Trump was perhaps not wrong to believe that he could “stand in the middle of Fifth Avenue and shoot somebody” and not lose voters, so long as that somebody was female, black or brown, Muslim, or a migrant.5

As president, Trump has assembled the most male-dominated staff in decades, and appointed known white nationalists to senior positions. With the help of a group of (mostly) men in Congress, he is attacking antidiscrimination and equal pay laws; health, contraceptive, and prenatal care; foreign aid for women’s advancement; national guidelines to address sexual assault on college campuses; and any chance that the highest court will act to protect civil rights. Thanks to the craven complicity of the Republican Party, Trump is undermining participatory, broad-based democracy before our very eyes. Indeed, there is nothing about his constitution—barring, perhaps, his laziness—that suggests that he will voluntarily cede power when his term (or terms) are up.

This is a historical schism, a realignment of reality that requires a rethinking of who we are, what we do, and why.6 Accordingly, Trump’s rise demands that feminists and their allies learn to think and fight differently. And we must learn fast.

The first thing that must go is the belief among progressives that we are on some fateful journey to a better place.7 We know that America’s grand democratic vision of “all men are created equal” didn’t initially include all men, or any women, and that we have never granted the promised equality. Yet many of us still hold fast to the idea that America is a great nation, managing the cognitive dissonance by envisioning the country as on a journey toward perfection. As Martin Luther King Jr. famously said, echoing the abolitionist Theodore Parker, “The arc of the moral universe is long, but it bends toward justice.” 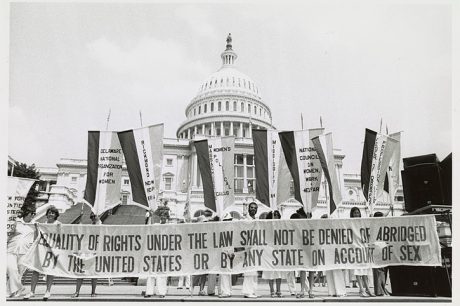 Among feminists, the reigning metaphor reflecting this optimism is the “stalled revolution,” a phrase introduced by the sociologist Arlie Hochschild in 1989.8 Her intent was to draw attention to both the progress that had been made (women’s enthusiastic embrace of the traits and activities previously restricted to men) and the progress yet to be made (men’s embrace of those previously restricted to women). Implicit in the metaphor is the idea that we will have reached gender equality when men and women alike embrace both halves of their humanity: masculinity and femininity. As a nation, Hochschild argued, we are halfway there. To fully revolutionize gender relations, we just need to get moving again.

Thirty years is a long life for a metaphor, and it’s still here because it’s been useful and descriptive, reflecting a lived reality. But we are in Trump’s America now. The metaphor of the stalled revolution, however useful it has been, posits a linear past and future. It assumes that stall is equivalent to stasis: that we are still in the driver’s seat, the path is still there, and we’re still aiming at something good. The metaphor doesn’t allow for the possibility that the world has shifted around us, setting us on a path that we may no longer want to be on. It certainly doesn’t contain the prospect that we are—that we have been—moving toward something terrible.

In fact, Trump’s masculinity is what we call a toxic masculinity. In the pre-Trump era, the modifier was used to differentiate bad masculine ideals from good ones. Toxic masculinities, some claimed, were behind sexual assault, mass shootings, and the weird thing where men refuse to wear sunscreen, but they didn’t reflect masculinity generally, so one had to leave that idea alone. But we can only give masculinity so many modifiers for so long before we have to confront the possibility that it is masculinity itself that has become the problem.

Feminist critiques of projects like Sheryl Sandberg’s Lean In (2013), for example—those that exhort women to compete with men in male-dominated workplaces—suggest that women’s embrace of masculinity may be good for individual women but actually quite bad for society.9 Relishing competition over cooperation, taking pleasure in beating opponents, and showing no remorse for hoarding wealth and exploiting power are features of a masculine “politics of domination.”10 Is it really a better world if half of the winners of this game are women?

We need to start being honest about what being a man has come to mean.

Meanwhile, sociologists have argued that men are perfectly capable of mixing femininity into their gender performances in ways that uphold men’s dominance.11 Anti-rape campaigns like “My Strength Is Not for Hurting” and pro-family ones like the Promise Keepers, for example, both involve men invoking a feminine ethic of care that, nonetheless, positions their control of women and other men as good and right.12 This is a benevolent sexism instead of a hostile one, but it is sexism nonetheless.13

As the sociologist Raewyn Connell once observed, men becoming more feminine and women becoming more masculine may produce gender equality, but it “may do just the reverse.”14 Indeed, such an outcome likely wouldn’t even be good for most men. An ideology that equates masculinity with “winning” is one in which only a handful of men come out on top.15 Poor and working-class men, old men, queer men, trans men, men of color, immigrant men, and men with disabilities disproportionately lose. So do men who find no pleasure in domination. Ironically, this is often why men who are failing in this macho competition—the economically struggling, the unmanly nerds, and even sometimes gay men—are among the most obviously sexist. They may be at the bottom of a hierarchy of men, they reason, but at least they’re not women.

Applying these ideas to Trump’s presidency, it’s hard to argue that the high-profile, high-status, and highly paid positions of Kellyanne Conway and Sarah Huckabee Sanders, not to mention the presence in the White House of his daughter, Ivanka, are doing anything to undermine gender inequality in the US. Quite the opposite. Meanwhile, Trump’s claim to be the sole person capable of saving America—captured in his appalling comment about the Middle East: “I alone can fix it”—positions him as an omnipotent patriarch.16 He says he is protecting Americans when he bans Muslims from the US, calls for a wall on the Mexican border, and threatens nuclear war with North Korea, often specifically invoking women’s sexual vulnerability when he does so.17 If Trump has his way, most men will suffer, too. His policies—from his tax plan to the deregulation of industry—hurt everyone except those at the very top.

Is this where the stalled revolution is now headed?

The quaint balance of masculinity and femininity that the metaphor promised is no longer desirable, if it ever was. Instead of advocating that women compete with men on masculine terms and men mix in just enough femininity to distance themselves from the most toxic versions of masculinity, we need to start being honest about what being a man has come to mean. Trump’s rise has made it terrifyingly clear that his toxic version is not at all peripheral to 21st-century modern masculinity. It is central. It is authoritarian. And it is lethal. 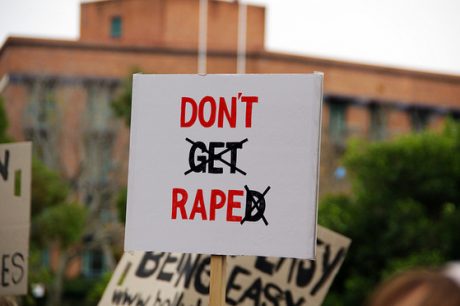 If we’re going to survive both President Trump and the kind of people he has emboldened, we need to attack masculinity directly. I don’t mean that we should recuperate masculinity—that is, press men to identify with a kinder, gentler version of it—I mean that we should reject the idea that men have a psychic need to distinguish themselves from women in order to feel good about themselves. This idea is sexist on its face and it’s unsettling that we so rarely think of it that way.

In fact, we should be as suspicious of males who strongly identify as men as we are of white people who strongly identify as white. We should understand, in hindsight, that one of the reasons women were so keen to embrace masculinity in the first place was because it feels good to feel superior. And we should recognize, as well, that it is men’s belief that they should be superior to women and other men that is the cause of so much of their rage, self-hatred, and suffering.

We are here in Trump’s America in part because we have been too delicate in our treatment of dangerous ideas. The problem is not toxic masculinity; it’s that masculinity is toxic. Its appeal is its alluring promise that if we obey it, we can all bask in a sense of superiority over someone. It’s simply not compatible with liberty and justice for all.

If we are going to finish the gender revolution, then, we need to call masculinity out as a hazardous ideology and denounce anyone who chooses to identify with it. We need to stop talking about what it means to be a “real man” or an “empowered woman,” and begin talking, instead, about what it means to be a good person and a good citizen. Our nation’s future depends upon it.