Picturing Freedom
Freedom Over Me: Eleven Slaves, Their Lives and Dreams Brought to Life by Ashley Bryan enriches a fragmentary archive by tapping into something we know for sure about the enslaved but seldom allow ourselves to explore ... 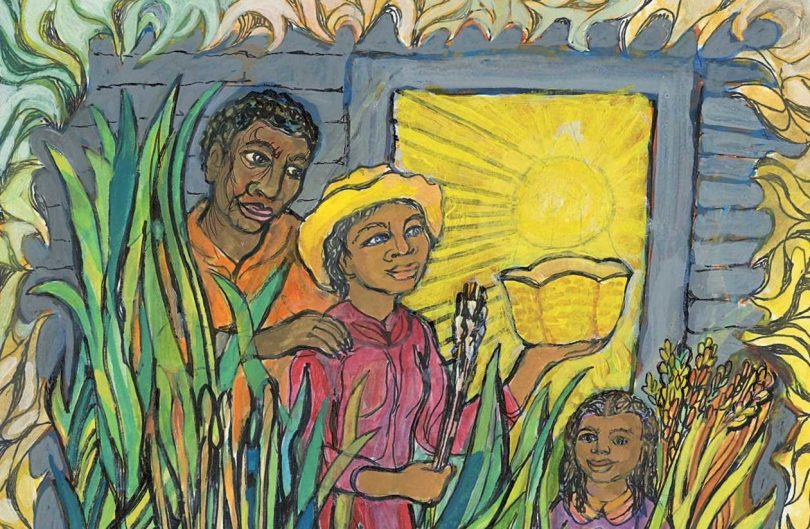 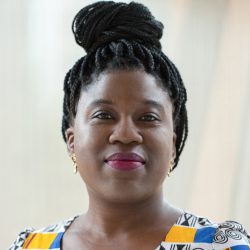 In her deeply thoughtful and gracious article “Venus in Two Acts,” Saidiya Hartman grapples with the moral implications of not only resurrecting the enslaved dead for research purposes, but also contriving histories about them, virtually out of whole cloth, from sparse information found in the slavery archives. She concludes that the acceptable compromise of “performing the limits of writing history through the act of narration” will have to suffice for now, and she offers up Octavia Butler’s novel of speculative fiction Kindred (1979) as a model for how we as inheritors of slavery’s archive might begin, more ethically and humbly, to attend to the incompleteness, violence, and lacunae that often typifies that archive.1

Working in the same spirit as compilers of #FergusonSyllabus and other similarly crowdsourced bibliographies, I propose that we add the children’s book Freedom Over Me: Eleven Slaves, Their Lives and Dreams Brought to Life by Ashley Bryan to the #NarratingSlaverySyllabus that Hartman effectively began with her proffer of Kindred.2 Bryan’s picture book, which recently garnered both Newbery and Coretta Scott King Honor awards, at once acknowledges the historical constraints imposed by the scant primary sources pertaining to the lives of slaves and insists on telling such stories anyway. Bryan enriches a fragmentary archive plausibly and therefore responsibly by tapping into something we know for sure about the enslaved but seldom allow ourselves to explore: they possessed the power to dream.

Based on an actual historical document that Bryan found—a one-page appraisement of all the property mentioned in the will of a plantation estate owner named Mr. Cado Fairchilds—Freedom Over Me is designed to ground its readers in the historical facts that legally rendered black people property and ultimately made auction items out of some of them upon their owner’s demise. But in pairing historical documents of black slavery with the freedom dreams of each enslaved character, the book’s very layout also models how to strike a balance between grounding in history and exercising creative license in the slavery archives.3

In a series of multipage profiles that successively illustrate the lives of the widowed Mrs. Fairchild and her 11 slaves, Bryan reminds us that besides working hard at an actual estate situated in a particular place and time, the enslaved dreamed, too, and often about an African past. In so doing, he asks readers to see the enslaved more comprehensively, to understand the fullness and breadth of their humanity, and to remember them as the multidimensional people they were. Each profile features stream-of-consciousness poems from that person’s perspective, along with powerful line drawings of their distinctive faces. By endowing each slave with a richly detailed past, present, and fantasy of the future, Bryan exercises poetic license in order to help us face the awful fact that such people were actually bought and sold as chattel, their families torn apart whenever a white slave-owning family needed to liquidate its property to realize their own dreams. The dreams of the enslaved, Bryan suggests, must have served as temporary antidotes to what it means to be at your owner’s mercy in such a way.

So if Mrs. Mary Fairchilds, the white, widowed mistress of the Fairchilds estate, dreams of how wonderful life will be after she has essentially become a runaway slaver and freed herself of slavery by selling her slaves:

I’m having the estate appraised.

I will return home

where I may live without fear,

surrounded by my own

Then, for example, Betty, one of the slaves who works as a flower gardener on the estate, dreams bigger and more generously about the future she envisions for herself, her family, black people, and the whole of the Earth:

from cities and farms

to work and study the land

Earnings from our labor

would benefit all of us,

Our cultivation of the land

Is our gift of thanks,

Our praise song to Mother Earth.

Their dreams accentuate that fullness of their humanity, and the consequence is that we are made to see the extent of slavery’s cruelty anew—how its effects insinuate themselves well into the future by denying the enslaved the opportunity ever to realize those dreams. When Bryan reincarnates the enslaved for us in dream form, when he reiterates who they are by way of their individual desires for themselves, he offers us a portrait not only of how they see themselves in the future, but also of how slavery actually exterminates multiple versions of an enslaved individual: at the minimum, both who they were and who they could have been had they been given the chance.

While Freedom Over Me opens with the conjured-up voice of Mrs. Mary Fairchilds and closes with the aforementioned historical appraisement document, the visual and verbal representations of the 11 constitute the body of the book. Beginning with Peggy, the Fairchilds’ cook, Bryan allocates four different and consecutive depictions to each of them. First, he supplies a full left-hand page drawing of the spotlighted person’s head, shoulders, and chest, captioned with their appraised dollar value, name, and assigned age. Next comes a full right-hand page of direct-discourse free verse—simply titled that person’s name—that serves as a streamlined autobiography: their occupation on the estate, their preoccupations, their sources of joy and sorrow, and talk of their loved ones. Then, Bryan adds a full left-hand page titled “[Name] dreams” in which the person shares their dreams of freedom. Finally, we’re shown a full right-hand-page visual illustration of the dream that was just shared. Swirls of color, cloth, nature, and scenery characterize these lively drawings, endowing them with an impression of vibrant movement—indeed of possibility! 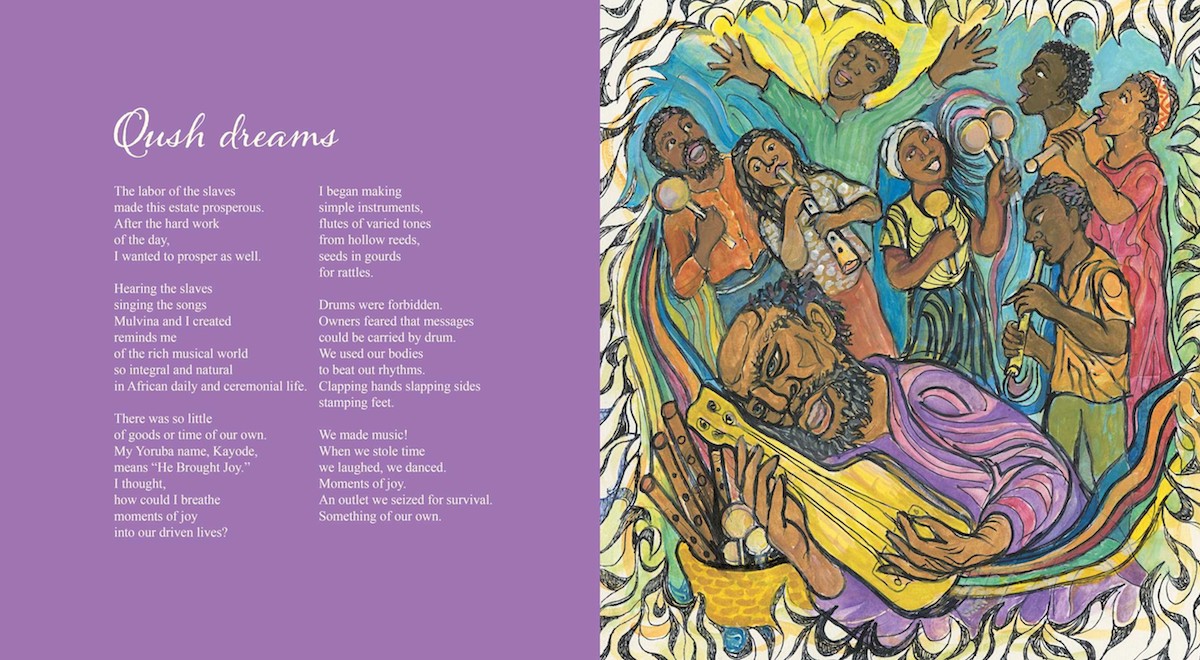 The lushly colored streams of consciousness we observe in the dream drawings stand in stark contrast to the individual portraits that inaugurate each person’s section. 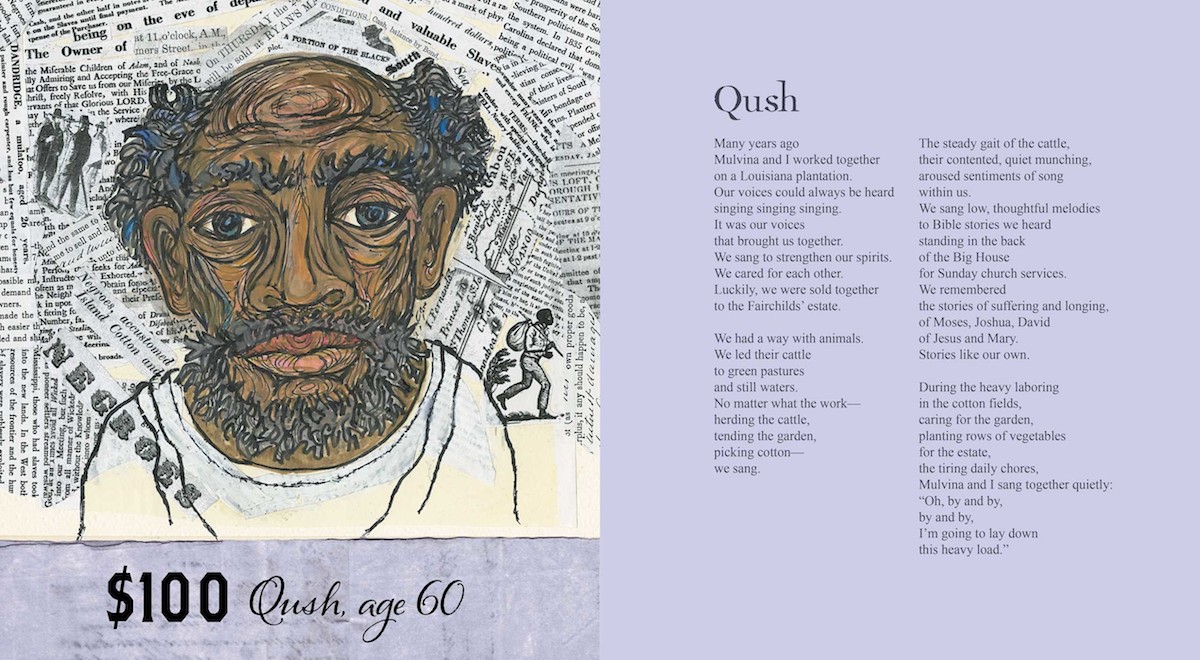 The background of these portraits is made up of documents such as newspaper clippings, slave bills of sale, and runaway-slave advertisements, sometimes made to look like a papier-mâché collage—the effect of which is to locate or anchor the individual in a particular historical context and remind us of their status as claimable pieces of property. While the background is literally and figuratively about capturing each person in time, the foreground features only a part of their body, a full-frontal or three-quarter view of their face, albeit one teeming with the swirls of life we find in the dream drawings. These intricately lined faces insist on a unique life being lived, despite background documents often punctuated by the word “slave” or “negroes,” which function to homogenize them.

While School Library Journal recommends Freedom Over Me for fourth- to sixth-grade readers, the weight of the history covered and the complex vocabulary used seem to necessitate, anticipate, or invite the return of that reader at a later date. That is to say, the picture-book reader might need to evolve into an older and wiser person in order to access different levels of comprehension embedded in the book. The privilege of being able to accept or decline Bryan’s implicit invitation to come again functions as a reminder that just as we contain multitudes in a lifetime, so would the enslaved, too, had they been given that room to grow freely. At the same time, while the different levels accessible in Freedom Over Me might invite young people to reread it at a later date, the dreams, in particular, make the book especially appealing to children, who still believe in dreams and who would likely need their inclusion in it to temper the harsh facts of history it presents. Perhaps too many of us adults have been so inured to the deferral and death of dreams (as well as to our failure to recollect them) that we have forgotten how they matter. Because they matter not only to how we validate our identities now, but also to how we prepare the way for the vision of our improved-upon or radically different identities tomorrow. 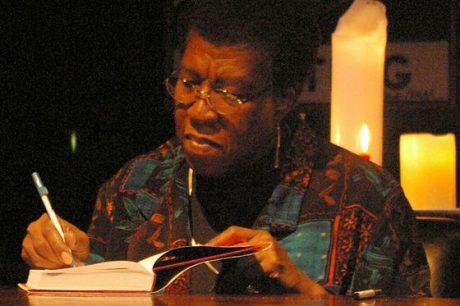 Theorizing about what course of action might free him (and all black people contending with the aftermath of slavery) from a “crushing” sense of having been objectified and dehumanized, political philosopher and psychiatrist Frantz Fanon surmised: “As soon as I desire I am asking to be considered. I am not merely here-and-now, sealed into thingness. I am for somewhere else and for something else.”4 1994), p. 109.] Through the stories and dreams of 11 enslaved Negroes, Bryan has effectively wrested the enslaved from the tar pits of slavery, reanimating them through their desires and extending their lives beyond where and how they have tended to be depicted (or rather frozen) in history as objects. Perhaps not surprisingly, the famously eloquent Martin Luther King Jr. even had a word to describe the process and the aftermath of transforming humans into slaves: “A nation that will keep people in slavery for 244 years will ‘thingify’ them—make them things.”5

When Bryan enchants the lives of the enslaved with their hopes, he inevitably demonstrates how slavery, therefore, denies them their projections of themselves into a future. That is to say, slavery doesn’t just constrain who you are now, it also prevents you from becoming whomever you might be tomorrow and from sharing your dreamed-up philosophy of the future with the world. It unceremoniously cancels your time to exercise those multitudes you may contain as well as the potential that your dreams indicate you may possess.

In Freedom Over Me, fact, fiction, and dreams come together to manipulate or stretch time on behalf of those who had had their time surveilled, truncated, or stolen from them altogether. Otherwise, as the meme pictured below suggests, to tell the story of historically and currently persecuted black people without telling the story of their dreams is essentially to deny them their futures.6 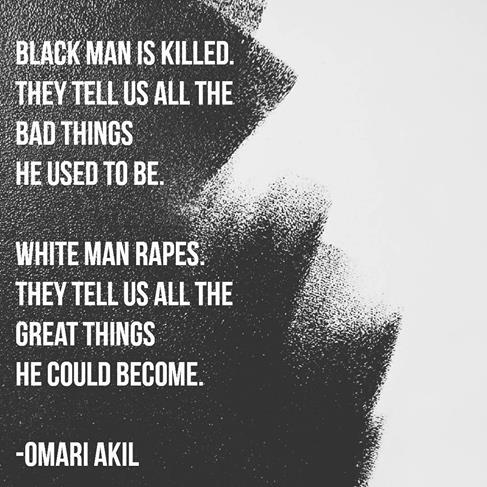 Bryan has written a book demonstrating how much he fervently believes that the enslaved had a future; he also believes in the freedom dreams they envision for themselves and the rest of the world. Their dreams are just as much ideas about what it would mean to be free as they are free ideas, being made available to us so that we might actually do something with them—whether it is to acknowledge, cherish, mourn, or be inspired by them.

Featured image: detail from “Charlotte Dreams,” in Freedom Over Me: Eleven Slaves, Their Lives and Dreams Brought to Life by Ashley Bryan 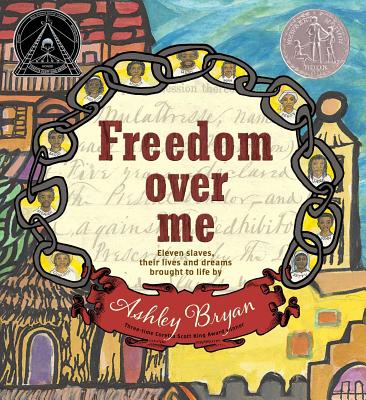 Freedom Over Me: Eleven Slaves, Their Lives and Dreams Brought to Life by Ashley Bryan