Planning Happiness: A Postcard from Christianshavn, Copenhagen
This is the latest installment of Public Streets, an urban observations series curated by Ellis Avery. This street used to be quieter, just an occasional bike rattling over the cobblestones along a ... 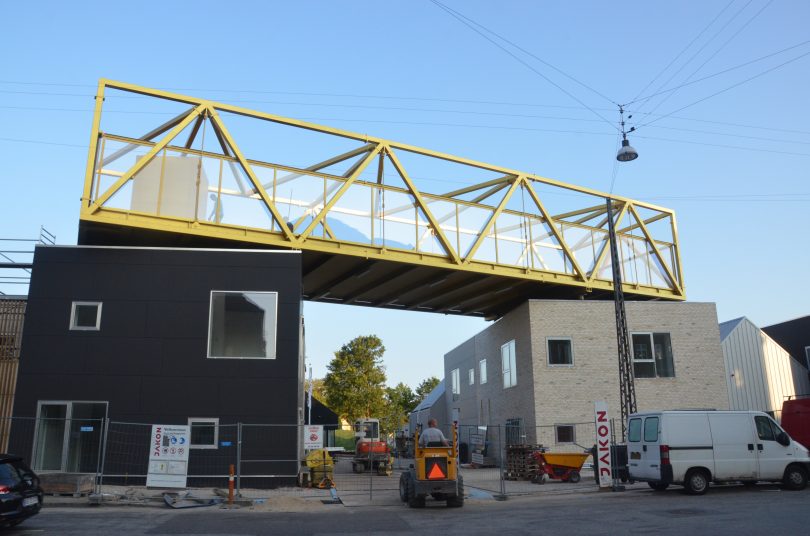 This street used to be quieter, just an occasional bike rattling over the cobblestones along a pretty stretch of Copenhagen canal. The 19th-century residential apartments were built to service an older naval and industrial quarter. When we were renovating our kitchen a man poked his head in to ask if we knew that beer had been delivered even into the 1980s to the workers in the naval base.

Recently the Copenhagen City Council has opened a network of bike paths and bridges cutting fanciful loops through the city. The traffic this brings is audible from my desk. The tourists stop to look at the flowers by our kitchen door and wobble by on their rented bikes. The locals carry kayaks to the water and buy their evening picnics at our tiny branch of Irma, the organic supermarket chain that sets costly menus for the city’s dominant middle class.

To the west, 10 minutes across the car bridge, is the old city of Copenhagen with its green-copper roofs and pretty things for sale. A leather Egg Chair sits in the window of the big department store, its $20,000 price tag out of sight. The eight-paned wooden windows and the pastel colors of the old houses are protected under conservation law.

A busy bike bridge in Christianshavn. Photograph by Christina Lupton

But here in Christianshavn, at the outer limit of the old city, the space once dedicated to maritime infrastructure has been released back, first to the 1970s squatters and anarchists, and now to a new generation of architects and engineers. The bike bridges, when not opened to let the boats through, lead to a new public sports hall, a generous university campus, and an artificial beach. Denmark’s largest childcare institution is taking shape here as a long row of buildings playfully topped by a yellow cage, a glass football field in the sky. An artificial ski slope looms, hiding the incinerator that will turn the city’s rubbish into clean energy as it burns. Plans for a public pool complex on the harbor have been approved.

The Danes are famous for building things—chairs, lamps, bikes, cities—so perhaps its no surprise that they’ve set about building a landscape befitting their reputation for happiness. From an international perspective, it’s remarkable that not one of these new leisure structures is privately funded or designed for profit. In London or New York or Vancouver or Hong Kong, big business would have to be involved. In Norway, it would be oil money. Here, taxes and foundations fund public architecture.

Below my window, I hear a German father telling his teenagers to look up from their Pokemon Go, and note the bike traffic and the clean canal water full of paddleboarders as a symbol of where Germany might have gone. Here there is a commitment to leisure and clean living, creating a consensus that is breaking apart in other European cities.

Pedestrians taking a stroll on a Danish street. Photograph by Christina Lupton

There are no refugees and few non-Europeans walking past, but they might have something different to say. Swimming and cycling have become notorious, contested rites of passage in the country’s harsh process of integration. Paddleboarding in a burkini is probably not worth the effort. That new kindergarten will be open to all, but in the kitchens they will debate whether or not to serve the children pork, and many will argue for it in principle as a national dish.

First build these bridges—loopy, colorful, and unnecessary—and then the people will come cross them. Build places to be happy, and they will play; build bike paths and the debates about traffic will take care of themselves. The solar panels on our roof were state subsidized. Planners with public money can make this the order of things, surmounting resistance or apathy by creating the future before it arrives accidentally. When the residents of Christiania—the 1970s community still going strong within the barracks and garrisons—protested the bike paths, they built them anyway. And now the residents are using them along with everyone else.

There’s also a longer kind of play visible in this landscape. Infrastructures of leisure, as well as sites of resistance, sitting inside the crumbling institutions of profit and empire and violence: this is history made visible as a force that even the Danes might not be able to plan for. If happiness has an infrastructure, perhaps we don’t know yet what it is—though a yellow football field in the sky seems like a decent place to start.