Plastic Fantasies
The doll lies, tranquil, her nude body pale and her vulva hairless and unnatural. Her hand prominently clutches a lamp, but her head is just out of sight. A tendril of blond hair draws the eye ... 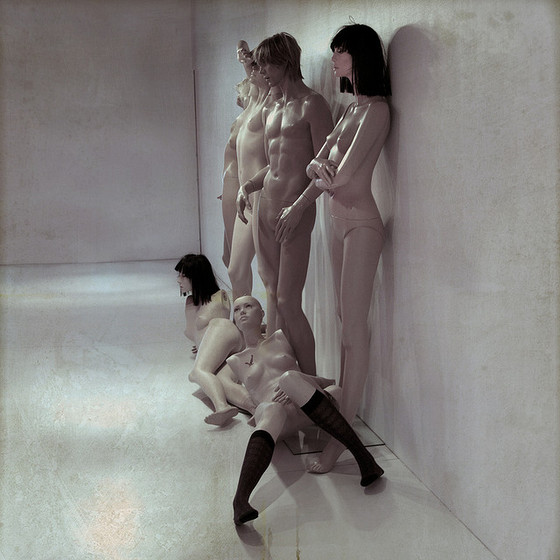 The doll lies, tranquil, her nude body pale and her vulva hairless and unnatural. Her hand prominently clutches a lamp, but her head is just out of sight. A tendril of blond hair draws the eye, hinting at the unseen face. We peer through eyeholes onto the scene, a two-room installation depicting, perhaps, a “frenzied rape or sex murder” set in a bucolic Swiss landscape.

The mythos of the Pygmalion character—the desperate, desirous maker enchanted by his inanimate love-object—echoes throughout Smith’s history. She is inorganic and therefore static; she is made by the master and brought to life by his love for her. In this sense, her thingness troubles some contemporary notions that consider ideal sex to be incompatible with powerless submission. This normative sex is thought to be be the product of consent and the source of mutual pleasure with an equal partner—or at least an equally living one. But the Galatean doll offers physical pleasure in the allure of creation, domination, and possession.

Marcel Duchamp spent years crafting and re-crafting his limp and loveless mannequin, using both his lover and his second wife as models for various parts of the body. He wasn’t the first: some 50 years earlier, the artist Oskar Kokoschka commissioned a dress- and doll-maker, Hermione Moos, to create a life-size mannequin in the likeness of his former paramour, Alma Mahler. He spent roughly a year in correspondence, accompanying his letters with numerous paintings to instruct Moos on how to properly render his beloved. As Smith details, Kokoschka’s obsessional descriptions were filled with repeated, neurotic requests to make the mannequin more voluptuous and furry. Kokoschka celebrated the monstrous final product in 1919 with a party for its arrival and unveiling. He was so troubled by its failure to mimic his lover, however, that he ended the event with the unceremonious beating and beheading of the doll.1 A neighbor is said to have called the police to report the savage torture and murder of a woman.

the mannequin disturbs because her limited realism betrays a widespread Pygmalionist fantasy that goes far beyond the pathological desire for frottage with statues.

In a more contemporary account of erotic perversity, Smith discusses RealDolls, a brand of bespoke sex dolls that start at $5,499. More specifically, Smith emphasizes the conundrum of how to appropriately treat these objects. Some employees of Abyss Creations, the company that makes RealDolls, have expressed concerns about the misuse of their products. So-called iDollators (those who buy, use, and sometimes marry RealDolls) have customized dolls for pedophilic fantasies or subjected dolls to sadistic sexual violence. This might sensibly provoke a moralizing reaction: who would treat a sex doll with such disrespect? But Smith gently chides us that the “sex doll is, an object [sic], I repeat not, a woman.” So why does it matter if she is used to satisfy pedophilic fantasies or subjected to violence? The doll’s indifference to cruel treatment contrasts with the doll’s obvious attempt to look “real,” what Smith calls her “will-to-verisimilitude.” These dolls present a paradox for us, namely “that there is both more to a sex doll than sex and nothing more to a sex doll than sex.”

Thinking of RealDolls as entitled to the same respectful treatment we might wish for organic women is somewhat absurd. It does not change the dolls’ “absolute object-ness,” but it does allow Smith to illustrate his argument that dolls have the potential to distort logics of desire because objects come to act upon us through our action upon them. iDollators and RealDoll users report that this “high form of masturbation” is nevertheless “very life-like.” As one user has it, “I’m pushing on it and all of a sudden it pushes back.” Some users imagine their dolls to have rich inner worlds and even marry them, so great their sense of intimacy despite the fact that the dolls “provide zero companionship.”

Following Smith’s lead in this book-as-peephole, I return to Duchamp’s imagery with one last observation. Duchamp’s pale, freaky mannequin with legs forever spread-eagled is not uncanny and disturbing because her will-to-verisimilitude succeeds. Indeed, she is obviously fake. Rather, the mannequin disturbs because her limited realism betrays a widespread Pygmalionist fantasy that goes far beyond the pathological desire for frottage with statues. It is a common perversity: a male, heterosexual fantasy of creating, dominating, and erotically possessing a sex object—even to the point of violent destruction.