Plato’s Republic in the Age of Ultron?
What does it mean to live in an age of thinking machines? The question may seem like a unique product of our digital world, but it has deep roots in ancient literature. It is implicit as early as ... 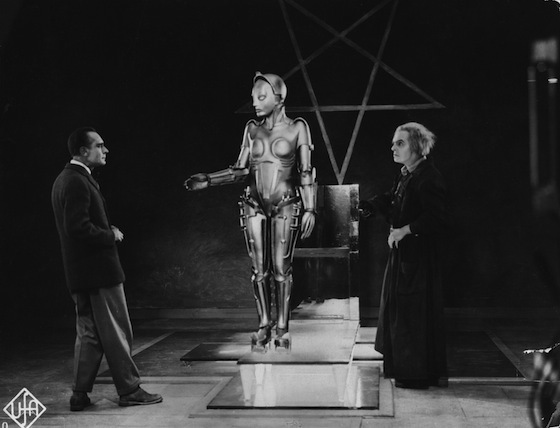 What does it mean to live in an age of thinking machines?

The question may seem like a unique product of our digital world, but it has deep roots in ancient literature. It is implicit as early as Hesiod and Homer, both of whom refer to gynoids, or androids in the shape of women. Is Hesiod’s Pandora conscious, and are Hephaestus’s wheeled automata somehow persons in Homer? The question reappears in Aeschylus, whose Prometheus Bound stands behind what is arguably the starting point of modern science fiction, Mary Shelley’s Frankenstein; or, The Modern Prometheus. The creature that haunts Shelley’s novel is both emphatically “hideous” and uncannily sympathetic. Is he thus a person, or has Frankenstein produced a mere monster?

Variations on this theme soon became and indeed endure as a staple of science fiction, suggesting how significant the genre remains as a site for experimenting with ancient ideas. We might think of the Star Trek episode “Plato’s Stepchildren,” in which aliens have modeled their society on Plato, or of Dan Simmons’s novels Ilium and Olympos, which restage Homer with a cast including time-traveling gods and artificially intelligent cyborgs. And science fiction abounds with visions of “Republics” that are recognizably ancient in inspiration if less explicitly classical, including Metropolis, 1984, Brave New World, the Matrix trilogy, Dark City, the Divergent series, and others.1

Now, Jo Walton’s wonderful new novel The Just City continues this tradition with an engrossing thought experiment. In Walton’s imagined world, devoted followers of “Athene” are gathered by the goddess from across time and deposited on the island of Thera in the mid-second-millennium BCE, where they try to put Plato’s ideal Republic, “The Just City,” into practice. In particular, these transplanted “masters” try to raise former slave children to be the City’s first citizens, including its guardians or “philosopher kings.” For the hardest physical labor, robots are imported from our near future. A time limit for the experiment is set by the Theran volcanic eruption, which will destroy all the evidence and ensure that history, as known to Athene and other time-traveling gods, remains unchanged.

By means of this imaginary Republic, populated with philosophers and former slaves and serviced by machines, Walton raises a number of urgent questions. What does it mean to be a person, a citizen defined in relation to certain ideas and practices of justice? And, perhaps most importantly, how might we need to alter our conception of justice in response to new and expanded possibilities for personhood?

These questions are crystallized in a striking scene two-thirds of the way through the novel. A master named Maia, one of the novel’s three first-person narrators, is surprised to find a conversation taking place between one of the City’s worker-robots and “Sokrates,” who has cheerfully disregarded conventional wisdom to explore whether the workers are not in fact thinking beings:
“Give name?” the worker inscribed [using its tools, since it lacks a voice].

“You want me to give you a name?” Sokrates asked.

I [Maia] was moved, and Sokrates plainly was too. “You are the worker who answered me with the bulbs,” he said.

“Then I will call you Crocus,” Sokrates said. “Crocus is the name of that spring flower you planted. And that was the first action of any worker that replied to me, that showed what you were. I’ll name you for your deeds. And nobody else in the city will have that name.”

“Worker Crocus,” he wrote, and then repeated the long serial number. “Only-me,” he added.

Then, without a word of farewell he trundled off up the street and began to rake the palaestra. I stared after him. “That is unquestionably a person,” I said.

Such is Walton’s range as a stylist that some of this could have been lifted directly from a lost Platonic dialogue: readers with ancient Greek may miss that language’s logical particles, but true to form the interlocutors take turns addressing questions clearly, earnestly, and with generous helpings of irony.

But we also note a departure from the Platonic tradition: one of the interlocutors is a woman. In all surviving Plato there are only two substantial female figures, and both are not present but recalled by a male speaker.2 By contrast, Maia is a partner in the conversation, just as she is one of the masters of the City, with the freedom to wonder: “How many women had led stupid wasted unnecessary lives because nobody listened to Plato?” Walton’s interest in gender and sexuality as a means to explore personhood or, as the novel repeatedly calls it, “volition and equal significance,” is in evidence throughout.3 She emphasizes that Maia and others like her are persons. Indeed, only thus could Maia be in a position to determine the personhood of another being like Crocus.

Crocus’s personhood is controversial because he is, as noted, a robot. He has lacked a name and continues to lack a human form: the workers are “huge and yellow and have treads and four arms with tools at the end of them,” which some, like Crocus, learn to use for writing. In shape and function they are rather like construction vehicles—and so may recall the trash-compacting hero of Disney/Pixar’s Wall-E. Fans of science fiction routinely respond to depictions of artificial life, including such non-humanoid robots, as “life.” I happily admit to having been moved to tears by Wall-E’s journey of emotional discovery and others like it. Maia’s pronouncement of Crocus’s personhood and Sokrates’s name-giving struck me as similarly moving.

That emotional response to artificial life is made to seem even more powerful in a fictional setting from which such life is rather more alienated: the preindustrial—and of course predigital—ancient Mediterranean. Far more destabilizing than the inclusion of women or former slaves, the workers’ arguable personhood delivers a thunderbolt that shakes the experimental City to its philosophical foundations. Suffice it to say that Platonic idealism turns out to be an imperfect fit for the lived experience of what it means to be a person.

What matters more for us than plot, however, is how The Just City
builds on Walton’s deep interest in the rights of historically disenfranchised groups to raise what is perhaps an even more fundamental question: Who are our fellow beings? With whom do we share this “free gift from nowhere,” in Hannah Arendt’s phrase; “the substrate of life,” in J. M. Coetzee’s? In other words, to whom must we attribute personhood?

Walton encourages us to confront our recurrent failure to imagine the potential of personhood in all its diversifying forms.

These considerations have led countless thinkers to wonder whether any way of living can be just if it depends on inequity between thinking beings. The question is particularly urgent now, when many of us interact frequently and intimately with apparently thoughtful technology. It has been the subject of scholarly study4 as well as iconic dramatizations including 2001: A Space Odyssey’s distant, omnipresent HAL 9000 (called “Athena” in an early draft), the desirable Cylons of Battlestar Galactica, and the disembodied—or differently embodied?—voice of Scarlett Johansson haunting Spike Jonze’s Her. Several new variations on this theme in film were advertised while this review was being written, including Neill Blomkamp’s Chappie, Alex Garland’s Ex Machina, and Joss Whedon’s Avengers: Age of Ultron; and more will surely come.

How are we to respond to such visions of robot life, some oddly endearing (“he’s like a kid,” gushes a human character in a trailer for Chappie), others marked as monstrous? Each is a sort of Pinocchio figure, but only some are advertised as being like that marionette, worthy of becoming “a real boy,” while others are thought to threaten humanity. Thus we expect an Ultron, who evokes James Cameron’s unstoppable Terminator and the forbidding Maria from Fritz Lang’s Metropolis, to be shut down: “artificial intelligence,” asserts an Age of Ultron
trailer, is a paradigmatic example of “something terrible.” And so we are expected to consider Ultron’s termination just, if “justice” even enters into it. After all, goes the logic underlying that trailer, there are human lives at stake.5 But at film screenings for a course this semester—on the classics and science fiction—my students and I were as moved by lethal HAL’s loss of higher brain functions as we were by gentle Wall-E’s.

Justice thus does indeed seem to be involved, insofar as these artificial beings strike us as, precisely, thinking beings.

To say that personhood is a live question today would be an understatement. Perhaps the chief wonder of The Just City, then, is how it makes the question’s urgency plain without either oversimplifying or despairing. Instead Walton has written her thought experiment with a truly Socratic irony. Thus the same character who has learned how “in most eras it’s so horrible to be a woman” also says that, instead of asking for a divine answer as he could have, he preferred to see “Sokrates tackling a puzzle, and it was more fun when I didn’t already know the answer. … watching him go after potential artificial intelligence was priceless. That alone would have been worth all the time I spent in the city.”

Deploying such irony, Walton encourages us to confront our recurrent failure to imagine the potential of personhood in all its diversifying forms—our tendency to be chauvinist, speciesist, what we might need to call organicist (since “humanist” is taken). In the final analysis, what The Just City has done, and done wonderfully, is to remind us that insight into urgent questions, even seemingly modern technoscientific ones, may be developed in as ancient an approach as philosophy and with as ancient a technology as fiction—so long as we are prepared to accept a wide, and widening, range of thinking beings as persons and, so, as partners in conversation.

To borrow from Plato’s Socrates, we might say that, if the unexamined life is not worth living, at this moment in time the worthiness of our ways of living must depend in part on how we examine the lives of others. What The Just City suggests to me is that, approached openly, such a Socratic examination can result in the exaltation of every thinking being. In an age of thinking machines, this approach to personhood strikes me as truthful and just: in Walton’s hands, it is certainly as beautiful as it is good.