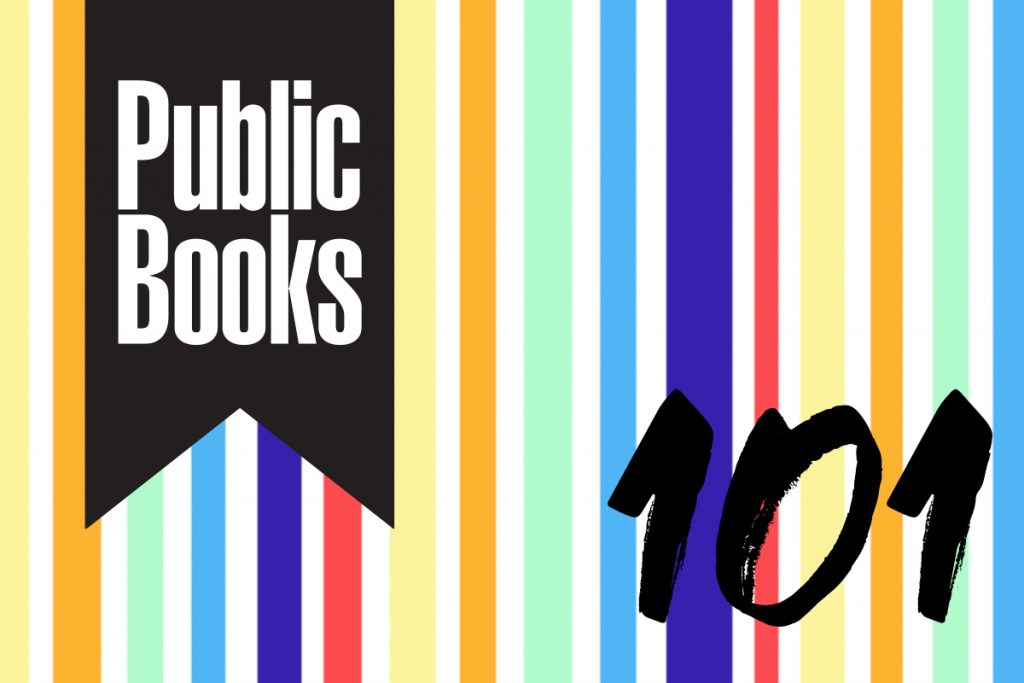 Public Books’s new podcast, Public Books 101, turns a scholarly eye to a world worth studying. In each miniseries, world-class scholars and writers join our host to examine a single topic from many angles, opening a window into the conversations that experts are having with one another about the urgent issues and problems facing us today.

Season 1 takes on the internet: the vast digital environment that has changed the way we live, work, and form communities. The technology that allows us to conduct more of our lives online brings with it, among other concerns, unprecedented data-mining and increased surveillance.

Where did the internet come from? And how might we work to fix its flaws? In this five-part series, we’ll cover how the internet was built, whose interests it was built to serve, and what it is doing to individuals, societies, and cultures.

Listen to the trailer

Public Books 101 is available on Apple Podcasts, Spotify, Stitcher, and Pocket Casts. Subscribe to our feeds to be notified when new episodes publish.

Season 1 is hosted by Annie Galvin, the associate editor of Public Books and a Mellon/ACLS Public Fellow. Annie holds a PhD in English from the University of Virginia and has published on literature, visual culture, and popular music in both scholarly and public-facing outlets.

We hope that listeners will take the podcast conversations as a spur for further thought and discussion. In that spirit, we have created an accompanying resource for teachers, scholars, and curious users who wish to learn more about the internet’s impact on our world. Check out “Reading Resources: The Internet” for a reading list curated by our guests and discussion questions related to each podcast episode.

origins of the internet

Where did the internet come from? Who gets left out of dominant stories about its origins? And what can history teach us about how to make the internet better?

Subscribe to Public Books 101 on Apple, Spotify, Stitcher, or Pocket Casts to be notified when new episodes are released.

Listen to the episode

In our first episode, two leading scholars of internet history delve into the stories you might not have heard about where the technology came from. Yes, DARPA and IBM played formative roles, but what about back-to-the-land hippies in the 1960s, or a sprawling network of African American engineers, inventors, entrepreneurs, and enthusiasts who helped develop and popularize the web? And how did major decisions about the early internet’s design and usage lead to some of its problems today?

What exactly are we doing when we’re spending time online? Who profits from our presence there? And how has being on the internet changed the experience of being human?

Listen to the episode

Two high-profile writers who cover internet culture meditate on the experience of being a person in the internet age. Social media has presented new phenomena—such as “doom-scrolling” on Twitter or visiting pop-up Instagram “experiences”—for human minds and spirits to contend with. We examine how the attention economy monetizes our time spent online, and Amanda and Jenny consider ways of using the internet that offer spiritual sustenance rather than dread.

Listen to the episodes

This episode was recorded in two parts. Part one, about Facebook and democracy, features Siva Vaidhyanathan. You can listen and subscribe to the show on Apple, Spotify, Stitcher, or Pocket Casts.

In this two-part inquiry into what the internet is doing to societies, two leading scholars who study online media take a critical look at both the affordances and dangers of large platforms like Facebook, Google, and Reddit. In part one, Siva Vaidhyanathan breaks down the global power of Facebook: what it provides in a positive sense, but also how exactly it makes money off of its users, and how its design and business model pose a serious threat to democracy. Siva shares some ideas about what would need to change for Facebook to serve its users—and societies—better.

And in part two, Alice Marwick breaks down what actually happens when companies collect and sell the data that users feed them, why it often feels as though smartphones are listening to us, and what we need to know about how privacy violations impact people differently based on gender, race, and socioeconomic status. Finally, she explains what mainstream discussions of online “misinformation” get wrong, and what she has found based on her extensive research into the darkest corners of Reddit, 4Chan, and other extremist platforms.

What new cultural forms are developing in the vast universe of the internet? How can observers and scholars keep up with the accelerated pace of human creativity online? And how do racial aesthetics, money, and power play out in internet cultures?

Listen to the Episode

Two influential scholars of digital culture explore the significance of internet-native forms like memes, viral videos, and fan-fiction websites as cultural artifacts. They consider what happens when people are given a place where anyone can say (almost) anything at any time. Lauren and Richard think critically about the assumption that the internet is making culture more democratic—in other words, easier to produce and to access—given that age-old practices like cultural appropriation continue to thrive online.

Silicon Valley and Beyond

Listen to the Episode

You can listen to this episode and subscribe to the show on Apple, Spotify, Stitcher, or Pocket Casts.

A historian and a data journalist explore the history and influence of Silicon Valley: how it came to be such an ascendent hub of technological innovation, and the limits of what the technologies produced there can do. Meredith and Margaret consider what is distinctly American about the history of Silicon Valley, how popular myths about Silicon Valley square up with reality, and why it’s important for people to recognize that technology cannot solve all human problems.

This work is licensed under a Creative Commons-Attribution License (CC-BY 4.0).