Polish Dreams
I often joke that everything I know about Israel I learned from comic books. As a secular Jew with deep ambivalence about Israel, this quip has served as a shield against being engaged on the topic ... 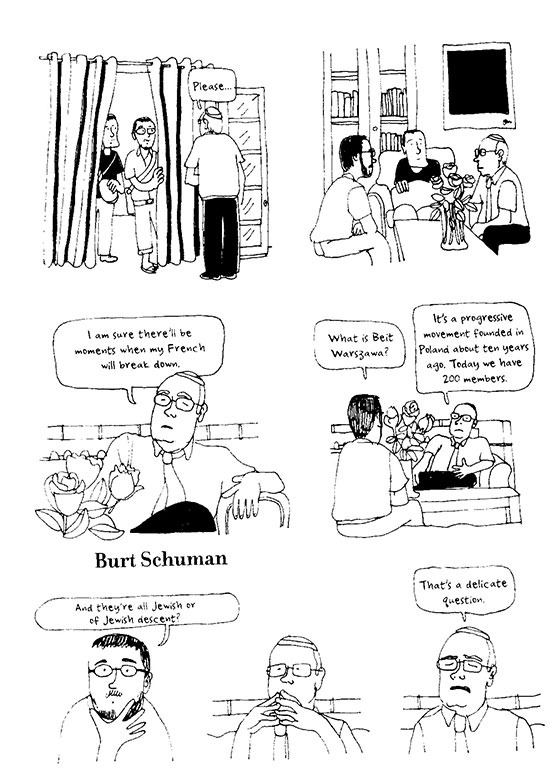 I often joke that everything I know about Israel I learned from comic books. As a secular Jew with deep ambivalence about Israel, this quip has served as a shield against being engaged on the topic by friends and colleagues on either side of the Zionist divide. So imagine my surprise when I recently gave my usual response and received the following reply: “Well, then you must know a good deal about Israel.”

The interlocutor was, of course, right. I had not been lying: everything I know about Israel is largely from comics, but my library of comics about Israel is piled high with books so complex and smart that I do, despite my best intentions, know some things. To list just a few of the comics that have taught me over the years: Joe Sacco’s two major works on Israel and Palestine, Palestine (1996) and Footnotes in Gaza (2009); Sarah Glidden’s How to Understand Israel in 60 Days or Less (2011); Harvey Pekar’s Not the Israel My Parents Promised Me (2012); Guy Delisle’s Jerusalem: Chronicles from the Holy City (2012); Boaz Yakin and Nick Bertozzi’s Jerusalem: A Family Portrait (2013); and the work of the Israeli cartoonist Rutu Modan, especially her novel Exit Wounds (2007) and the collection Jamilti and Other Stories (2008).

What I still know next to nothing about, however, is the long lost world of Polish Jewry, from which both my mother’s and mother-in-law’s ancestors came, following one pogrom or another, at various times in the late 19th and early 20th centuries. For Jews—many of whom trace their ancestry back to Poland—the lives of Polish Jews before the Holocaust is a lacuna. After all, long before Hitler came into power, the Poles and the Russian Empire had been actively discriminating against Jews, driving many from the homes their families had known for centuries. We know Poland was once the most vibrant center of Jewish culture in the world, but we know it in the way we know the Big Bang got this whole story started. That is, we “know” it, but we can’t really imagine it. Imperial Russian pogroms, the genocide of Hitler’s Final Solution, and a half-century’s repressions and scapegoating under Soviet rule have made the country’s once-thriving Jewish world difficult to imagine and even harder to recover.

Two books that recently became available in English-language editions—The Property by Rutu Modan (Israel) and We Won’t See Auschwitz by Jérémie Dres (France)—both attempt to begin charting that lacuna. At the center of each work lies the relationship between a grandmother with direct ties back to the lost world of Polish Jewry and a grandchild whose feelings about the country are at best ambivalent. And in each, the necessarily preliminary nature of this mapping is presented to the reader as an invitation for future collaboration and discovery. Somewhat surprisingly, it was not the meticulously recorded real-life research trip of Jérémie Dres and his brother but the fictional voyage of Modan’s The Property that most inspired me to wish to learn more about this world of my ancestors. 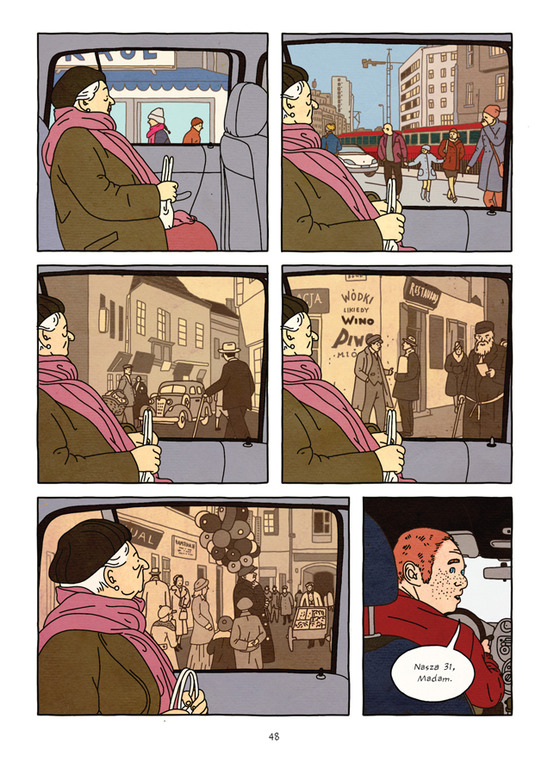 Outside her home country, Rutu Modan is the world’s best-known Israeli cartoonist. Her first graphic novel, Exit Wounds, tells the story of the search for the identity of the victim of a suicide bombing who might have been the estranged father of a young cab driver—and the lover of a young Israeli soldier. Modan’s earlier work combined a clear line style reminiscent of the great Belgian cartoonist Hergé with just enough uncertainty to the line to lend to the still images a surprising kinetic energy. And from the start she had a unique palette, at once subdued and somehow slightly off in a way that lent to her art an eerie ghostliness that works perfectly with her themes of family, memory, and identity.

Five years later, Modan’s line work has become much more expert, trading in some of its wavering lines for a precision and confidence that lends itself perfectly to The Property. Here Modan tells a story of a young Israeli woman accompanying her grandmother to Poland, ostensibly in search of information regarding the possible restitution of family property lost during World War II. As with Exit Wounds, the story proves far messier, and what follows is an extended series of digressions on the part of the seekers, neither of whom seem that interested in reclaiming lost property. The grandmother has come to see a lost love and to bring him news of a loss he did not know he had to bear. The young woman’s goals are even less clear, especially to herself: having recently suffered the death of her father—her grandmother’s son—she may be looking for a spark to burn off grief and the emotional daze that so often follows. She might well have found it in the form of a romance with a young tour guide, a non-Jew who has discovered a growth business in the increasing numbers of Jews returning to Poland in search of answers, property, or identity. But her guide and would-be lover, she soon discovers, has creative ambitions for her story that cause her to question her own motivations and her responsibilities to her family and her people.

Despite the emotional and historical differences between them, both the young woman and her grandmother can agree on one thing: neither wants to be in Poland. For the grandmother, the country represents loss and betrayal, with all evidence of her family’s lives there systematically expunged. For the granddaughter, like so many of us, if it represents anything at all, it is only Auschwitz, and Evil on such a grand scale it can hardly be believed by those who did not live to witness it in spite of the hard work of the intervening generations to pass on the memory. Memory turns out to be an awful lot like the “property” itself, passed down to people we never intended to receive it and in ways we cannot imagine. The book makes beautifully clear, however, that memories are no less real for being a shape-shifting inheritance we ultimately cannot control.

In the course of their peregrinations, the women of The Property see many things in Warsaw: the cemetery, the Fotoplastikon, and a reenactment staged by the Society for Jewish Memorialization. The one place they do not go is Auschwitz, the primary destination in Poland of Jews visiting from all over the world. For Jérémie Dres in We Won’t See Auschwitz, the decision not to visit this site is from the start an organizing principle of the trip. For the grandmother at the center of The Property, Auschwitz and the Holocaust were not her story. The anti-Semitism that drove her and her siblings from Poland to Paris began well before Hitler, at the hands of occupying Russian soldiers in the 1920s and 1930s.

Of course, the decision not to visit Auschwitz is also a young artist’s refusal to be conventional, to be a tourist, to do what is expected—something with which many of us might identify when recalling the trips and declarations of younger years. But if Dres’s refusal is a familiar gesture, it also strikes a hollow note that the author seems increasingly aware of and—reluctantly—willing to acknowledge. The sorrow over the loss of his grandmother is no doubt real, but from early on Dres makes it clear that what motivates him is writing the book itself. Not going to Auschwitz becomes a way of claiming the uniqueness of his story, a pitch to prospective publishers. Living in Paris as a secular Jew, Poland is a great uncharted territory in which he imagines himself, fondly and naively, as a pioneer out to recover lost treasures which he will bestow on an audience as ignorant of the history of Jewish Poland as he is himself.

Dres and his brother discover, quite quickly, that they are far from the first pioneers and that their quest is far from unique. Warsaw is crawling with Jews from all over the world looking for lost connections—and with Poles bearing armloads of documents revealing a Jewish ancestry long repressed and forgotten, and now (at least for some) a point of pride. Almost immediately Dres is forced to cede right of place to the Poles—many Jewish and quite a few not—who have dedicated themselves in the wake of the collapse of the Soviet Union to recovering what has been erased for more than a century.

What follows is a meticulous rendering of the interviews the brothers conduct with representatives from various organizations devoted to the restoration of Jewish history, genealogy, and present-day life in Poland. It is rarely thrilling reading: we listen to countless officials and volunteers give what are often well-rehearsed, canned speeches that inspire more boredom or disappointment than insight in Dres as he interviews them.

All of this is quite intentional, and honest. But it often inspires boredom or disappointment in the reader as well, and the text often feels more like a graphic transcription of research notes than a fully developed and well-structured book. Dres has a spare, black-and-white-sketchbook style reminiscent of the Quebecois memoirist Guy Delisle, who is likely a significant influence. But while Dres shares Delisle’s honesty, he does not have, just yet, Delisle’s vision for how to translate lived experience into a narrative. He knows this too, it seems, and the book ends where perhaps it should have begun, with Dres telling the story of his experiences in Poland to his grandmother at the cemetery, ready to finally start, as he suggests at the book’s end, “put[ing] things back in order.”