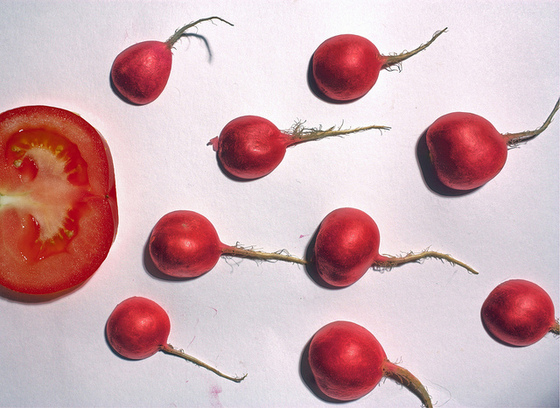 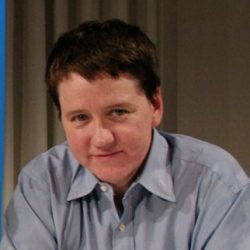 In the fall of 1990, at the beginning of my senior year of college, I became obsessed with pornography—or, rather, I became obsessed with the feminist debates about it. From the late 1970s until the early 1990s, pornography, along with sex work, butch-femme, and S/M, divided the feminist community, leading to public debates, legal battles, protests, community splits, and an explosion of manifestos, open letters, pamphlets, flyers, magazines, and books. Given my tender age, fledgling lesbianism, and profound nerdiness, my point of access to the feminist sex wars was through print culture. I was not a sex radical—I just read about them in the library.

The debates revolved around sex and power, the nature of femininity, and the relationship between fantasy, representation, and material reality. I was fascinated by the question of how to read scenes of erotic domination between women—did they repeat or refuse patriarchal norms?—and I spent hours poring over the key anthologies: Powers of Desire: The Politics of Sexuality (1983), Pleasure and Danger: Exploring Female Sexuality (1984), and Caught Looking: Feminism, Pornography & Censorship (1986). Shuttling between the local women’s bookstore, the reading room, and my dorm, I followed conflicts hashed out in the pages of magazines and journals like off our backs and On Our Backs, Sinister Wisdom and Bad Attitude. And I looked at the pictures.

That world seems a long way off now. The clandestine pursuit of subcultural belonging through analog mechanisms—picking up flyers, tracking down footnotes—has gone the way of feminist bookstores. Search engines can do a lot of the detective work for young queers these days, and far more efficiently. The slow consolidation of identity through reading also seems increasingly quaint in the face of the database aesthetics of a site like Tumblr, which can so quickly assemble—and disassemble—a sense of self. A recent search for “sex wars” on the site led to a page curated by “pussy-in-heaven” that featured photographs of cats, cheesecake GIFs, and messaging: “FORGET SHIT AND MOVE ON.” 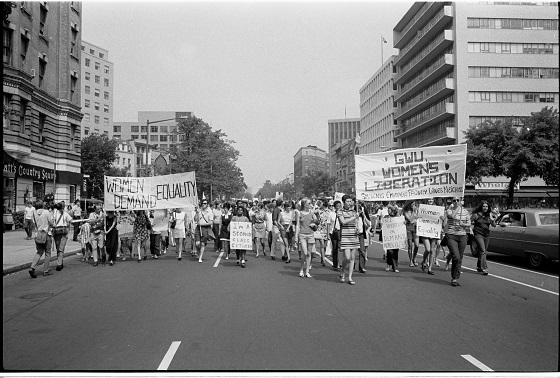 What now seems least relatable in this scene from my past, even to me, is the atmosphere of moral rigor in which I contemplated the rights and wrongs of lesbian sex. In a 1984 reflection on “the fallacy of misplaced scale,” the anthropologist and sex wars veteran Gayle Rubin argues that sex acts are “burdened with an excess of significance.”1 In those days, I was living the fallacy, constantly running ethical tests on real and imagined scenarios. (I just Googled the phrase “Does the dildo have a desire of its own?”—a question that I used not only to mull over in private but also, as I shamefacedly recall, ask my friends. No hits.)

It’s true that I still spend a lot of time flipping through feminism’s back catalogue. Is it the lesbianism that makes it so hard for me to “FORGET SHIT AND MOVE ON”? The consensus in Porn Archives is that the conditions for the production and reception of pornography have changed so radically since the 1980s that the questions feminists were asking about censorship, agency, gender, violence, and power seem today, if not irrelevant, at least in need of a serious makeover. Given the diverse, transnational, cross-media archive that the volume brings together, the argument is persuasive—even to die-hards like me.

I would add that the explosion of porn signals the widespread uptake of questions of objectification, the politics of looking, and the relation between power and enjoyment that were the hallmark of feminist thinking about pornography. The internet can sometimes look like an anarchic space of instant gratification, a place where ethics is the last thing on anyone’s mind. But the fact that we now refer to images of soft-center cupcakes, crystal rivers, and kittens in baskets as porn—as if they might be harmed in some way by the pleasure that we take in them—suggests that this way of thinking has not disappeared. Instead, it has been crowd-sourced, and, it might seem, trivialized.3 But such small-scale practices of judgment, as in the critique of micro-aggressions, get taken up in hashtags and GIFs in ways that recall both the guerrilla tactics and the high moral seriousness of the sex wars.

The work of the literary critic Frances Ferguson has been important to the proliferation of less literal framings of sex. In her 2004 book, Pornography, The Theory: What Utilitarianism Did to Action, Ferguson used pornography as an occasion to argue for the value of the classroom as imagined by the utilitarian philosopher Jeremy Bentham. Bentham’s regimented, competitive space—long the bête noire of Foucault-influenced accounts of social control and surveillance—figures positively in Ferguson’s account. She argues that the classroom and the factory parcel out action into discrete units and make it visible, so that it can be judged publicly. Ferguson suggests that pornography works similarly to “arrange its participants,” focusing on highly visible behavior to rank everything into “good, better, best,” or, as she argues in a reading of Sade, “strong, stronger, strongest and sexy, sexier, sexiest.” We are now living with the hangover from Bentham’s vision—not so much in the submission to a disciplinary gaze, but in the rule of meritocracy. However, Ferguson points to the “genuinely progressive” aspects of this system, the fact that it displaced inherited privilege by inventing ways to “distinguish one person from another so that you could award social credit.”

When you are reading Pornography, the Theory, you may find yourself wondering what happened to pornography, the pornography.4 Ferguson makes a personal appearance in Porn Archives, dropping in to visit Tim Dean’s graduate seminar, “The History and Theory of Pornography,” at SUNY-Buffalo. In conversation with Dean and his students, Ferguson insists on the value of abstraction, of thinking through pornography “empty of sexual content.” However, her comments on comparison, judgment, power, and the possibility of harm (it’s not pornography unless someone might get hurt…) resonate with the feminist ambition to adjudicate the ethics of pornography in a highly differentiated, structured, and visible way.

During the height of the sex wars, the Vancouver-based art collective Kiss & Tell organized a touring exhibit that drew on the principles of the Benthamite classroom as Ferguson conceives them. Drawing the Line (1990) brought together 100 photographs by Susan Stewart of sex acts between two women, ranging from kissing to scenes of bondage, fisting, and role-play. Visitors to the exhibit were encouraged to respond to these images in writing, describing when and how the photos “crossed the line” for them. While men were encouraged to write in a visitor’s book, women wrote their responses directly on the wall around the photographs, thus creating a highly visible, multidimensional space of comparison and judgment. 5 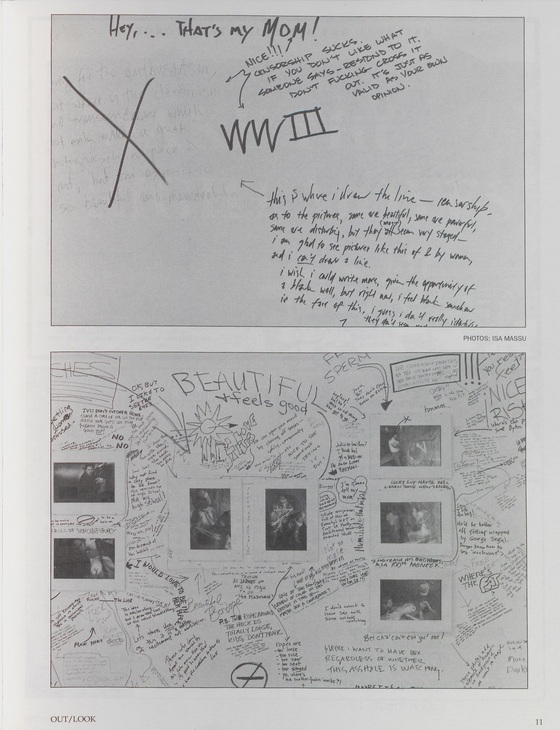 From Drawing the Line. Photo by Isa Massu / Kiss & Tell

Brinkema reads the absence of any redeeming eroticism in Forced Entry as “roughing” up the genre of hard-core pornography. In contrast to many pornographic representations of forced sex, rape is not converted into seduction: “There is not a single act of nonforced sex in the entire film or any instance of female pleasure, either in complicity with or against the will.” This doesn’t exactly sound feminist, and Brinkema in fact refers to the film as “an antipornography feminist’s nightmare.” But she suggests that by refusing to eroticize rape, Forced Entry emphasizes the absoluteness of the violation. Given that total lack of reciprocal pleasure, I wasn’t sure that Forced Entry qualified as pornography—was this roughing up the genre or abandoning it altogether?6 In the end, Brinkema celebrates the exteriority of an intruder who is never welcomed, never made familiar. Citing the philosopher Jean-Luc Nancy’s essay about his heart transplant and reading the formal logics of the film as about endless breakage, Brinkema writes: “The entry may have to take place infinitely.”7

Miller-Young published a brilliant monograph last year on the representation and experience of black women in porn. In A Taste for Brown Sugar, a combination of history, ethnography, and textual analysis, Miller-Young interviews several women about their experiences on the job, their pleasure in performance, and the paradoxes of agency. The focus on practice is refreshing: it allows Miller-Young to celebrate the talent, beauty, and savoir-faire of the actors, without papering over economic realities, the racism and sexism of the industry, or the violent history that conditions representations of black women’s sexuality. Miller-Young describes her pleasure in these women’s performances as well as her own struggles writing about this material. But she emphasizes the archival value of the project, noting that “this book reproduces and circulates images of black women in pornography, perhaps to the greatest degree ever accomplished in an academic work.”