Positive Discomfort
The cover of Miriam Katin’s graphic memoir Letting It Go is striking: against a backdrop of horizontal bars of red, white, and yellow, a woman dressed in black has opened her palm to release a ... 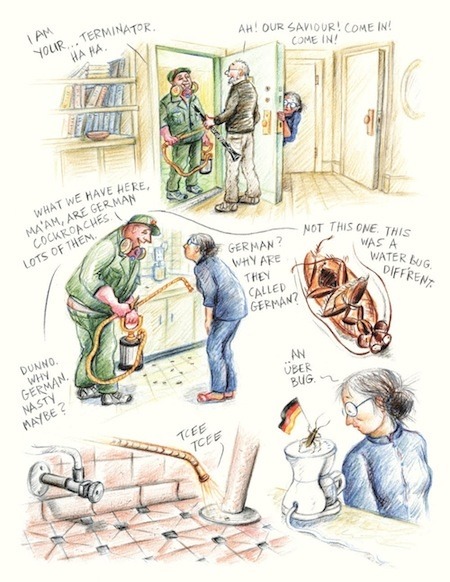 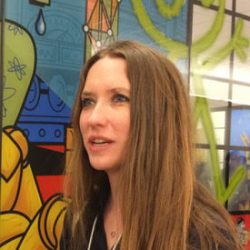 The cover of Miriam Katin’s graphic memoir Letting It Go is striking: against a backdrop of horizontal bars of red, white, and yellow, a woman dressed in black has opened her palm to release a balloon emblazoned with a swastika, which floats up and bleeds off the top right edge of the book. The title and Katin’s name appear in large, sans serif capital letters, also black, but it is the evocation of the German national flag that gives the scene its punch. The darkness of the lone figure is heightened by her contrast to the backdrop; her dedicated antipathy to World War II makes her legible—and lively. Flipping open the book, one is met with another image of motion and release on the front endpapers: the same figure, her face again only visible in profile but identifiable by glasses and a tousled bun, watches from an open window as a large eagle—recalling the one from Germany’s coat of arms—swoops down and scatters a flock of pigeons resting on a railing.

Born in 1942 in Hungary, Katin survived the Nazi invasion of Budapest as a small child; in 1944–45 she and her mother, using false identities, fled from the advancing German and then Russian troops. A New Yorker since emigrating in 1963 from Israel, where she and her family also lived from 1981 to 1990, Katin has worked as an animator for MTV, Nickelodeon’s Jumbo Pictures, and Disney Studios, but is most widely known for her first book-length graphic narrative, the memoir based on the story of that flight with her mother, We Are On Our Own (2006). Published when she was 63, We Are On Our Own had a quiet elegance. It used the containment inherent in comics’ frames to tell a straightforward, if disturbing, story of escape. Unusually, that story was entirely penciled (pencil sketches are typically a prefatory stage in the evolution of a comics story, followed by inking). The grayscale images of We Are On Our Own were both shadowy and expressively precise; the lack of color suggested the remove of the past, as well as the media through which we now access the period: black-and-white newsreels, films, and photographs. But unlike, say, the black and white of Schindler’s List, which harked back to the confident aesthetic of classic Hollywood cinema, the pencil suggested the artist’s work of reconstructing her mother’s life, of enumerating detail against the weight of experiences for which she was present if not cognizant, sentient if not articulate.

Letting It Go is a much harsher and stranger book, one bound to elicit discomfort—but of the positive kind that spurs reflection. At its center is not a charming child but a frantic older woman. In a big departure from its predecessor, Letting It Go dispenses, for the most part, with panelized storytelling, along with the aesthetic reserve of gray, black, and white. Appearing in full color pencil, its words and images bounce and swarm over the pages. Immediately, the book identifies its subject as excess, emotional and bodily: a daydream of exploding body parts and blood, oozing off the edges of the paper, appears on its second page. Ostensibly, Letting It Go is about Miriam’s struggle to come to terms with her adult son’s desire to live in Berlin, a city she, as a survivor of World War II, has long dreaded and despised. But it is mostly—and most powerfully—about how the body uncontrollably registers fear, about the ways that the fight for control over emotions manifests in the physical.

Letting It Go is a consistently corporeal book, from its attention to the rhythms of the body at work to the frenetic disgust of encountering infestations of cockroaches, whose bodies Katin draws again and again. One page focuses on cockroach anatomy in Katin’s deft pencil (“Ootheca can be seen protruding from the genital chamber of the female”); the next, in full color, depicts her years-earlier cesarean section in explicit detail, both mother’s and child’s flesh bloody and raw. Later, there’s a graphic four-page sequence about a diarrhea attack, as Miriam’s body betrays her on her first visit to Berlin. “It keeps coming!” the protagonist marvels in horror. The brown puddles swallow up her body; soon she’s ruined her nightgown, the sheets, and the mattress, and we see her naked in the shower scrubbing away pools of shit as her husband sleeps. Katin, in an email earlier this year, told me that the greatest compliment she receives is when readers find her book funny, but scenes like this one aren’t played for laughs—the book confronts abjection head-on, almost clinically.

In terms of plot and exposition, Letting It Go is looser than what one now expects from a “graphic memoir.” It can feel like an amplified (if often beautiful) sketchbook. Many aspects of its storyline—including one involving a former lover of Miriam’s, a Turkish poet—are deliberately underdeveloped. But the narrative’s frequent focus on the bodily rhythms and interruptions of a female protagonist nearing 70, combined with its aesthetic unruliness, make the book surprising and compelling.

Katin’s book resists conventional exposition but lets us see history worked out in the present tense on the body of the protagonist.

On first reading, I disliked all the attention to the minor violence of the body. It seemed confrontationally indulgent (a term I’m loath to use to describe memoir, especially by women, and especially when visual); the bugs and the shit made me cringe. On second reading, I recognized its importance—a weird assemblage of vignettes and anecdotes that does real work in producing discomfort. Letting It Go lets a lot go, most of all propriety; there are very few books occupied so centrally, and so matter-of-factly, with the older female body. And here there is a specific valence: Letting It Go is about the Holocaust, but only peripherally about Katin’s experience during World War II—in fact, readers who haven’t encountered the earlier volume, We Are On Our Own, are likely to be confused about the shape of her past. This book resists conventional exposition but lets us see history worked out in the present tense on the body of the protagonist. It is We Are On Our Own turned inside out: instead of reconstructing and exteriorizing the experience of the (m)other, this book tunnels deeply into the world of the child, now a grown-up, and places her lens and her concrete self at its center.

On the other end of the spectrum is Good Riddance: An Illustrated Memoir of Divorce. Created by Cynthia Copeland, the author of many popular books on parenting, it’s not immediately impressive. Unlike works such as Art Spiegelman’s Maus or Alison Bechdel’s Fun Home, which inhabit their medium so fully one could not imagine the narrative any other way, the comics form of Good Riddance does not initially feel motivated. Many of its formal features seem borrowed from Bechdel: the gray-green ink wash filling in black line art, the cutaway of a family home, the depiction of therapy sessions, the drawings of photographs for chapter title pages. This may ring especially true because of the book’s subject: affairs, secrecy, the breaking-up of a family with three children. Its tone can disappoint as well: there is a lot of self-satisfied snideness toward the philandering husband’s mistress, too much detail about what kind of man the husband is and what kinds of messes he makes, in which corners of the house. At first, the book does not appear to want to cut below the surface to the psychically difficult. 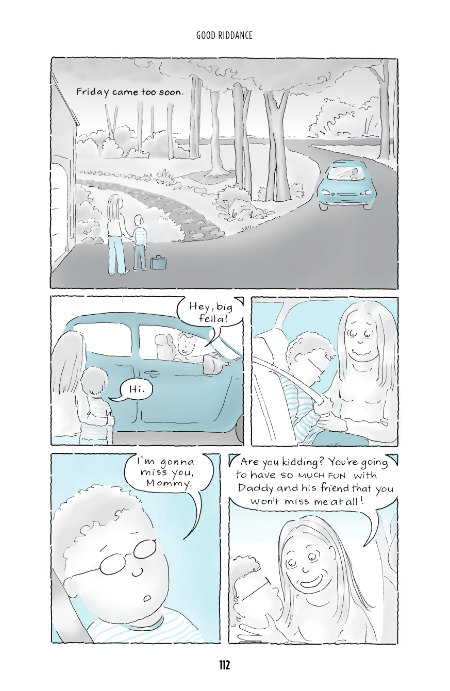 And yet Good Riddance becomes a brave object. It is not aesthetically ambitious, but its modest, stripped-down style has its charms. Copeland’s cataloging—the thorough diagrams, for instance, of her husband T. J.’s office and his house—eventually becomes legible as part of the mourning process the book itself enacts. The protagonist Cynthia can seem, in parts, irritatingly helpless—she notes that she is so used to being a passenger that she doesn’t even know how to drive to her own parents’ home. However, she speaks uncomfortable truths as she charts the dissolution of the “perfect family.” Copeland also makes some pretty honest statements about second marriages: “Nothing was ours. Secretly, each of us felt a stronger bond with our biological children than we did with each other.”

Copeland’s ending makes great use of the graphic format to express the pain of letting go of the perfect family by recognizing that it necessarily never existed in the first place. Copeland draws Cynthia alone in the family attic. She is surrounded by boxes of items that stand in for family history but the most prominent image in the single-panel page is the entrance to the attic stairs, here configured as an empty box, bottomless and holding nothing. “Without even realizing it, I was mourning an ideal that never existed,” the narrator writes. Cynthia and Will, her second husband, stand fused together on the book’s last page, highlighted in green, as the graphic narrative’s words testify to the repair of heartache. But as the central image of the page—tiny figures standing at the edge of a dark pit—powerfully intimates, loss is not easily overcome. Good Riddance may be more contained than Katin’s book about its attachment to the past, but it too is ultimately about the work of mourning.