Queer Magic
Neil Gaiman’s The Ocean at the End of the Lane and Michelle Tea’s Mermaid in Chelsea Creek both use magic to imagine solutions to childhood anxieties: What do you do when your family doesn’t feel ... 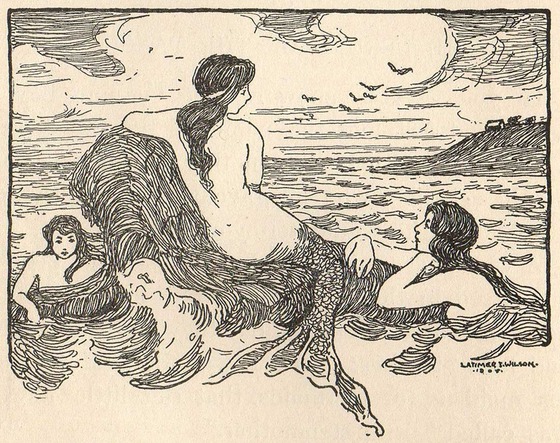 Neil Gaiman’s The Ocean at the End of the Lane and Michelle Tea’s Mermaid in Chelsea Creek both use magic to imagine solutions to childhood anxieties: What do you do when your family doesn’t feel like one? What kind of alternate kinship is available to a kid disempowered by age, obedience, and dependence? How might magic open up new possibilities for living? The fantastical worlds that Gaiman and Tea create are part of a literary genealogy that includes Roald Dahl’s Matilda, Frances Hodgson Burnett’s The Secret Garden, Tamora Pierce’s Circle of Magic series, Garth Nix’s Abhorsen Trilogy, and even J. K. Rowling’s Harry Potter series. All these books use literary fantasy to invent solutions to “kinship trouble.” Like their literary kin, The Ocean at the End of the Lane and Mermaid in Chelsea Creek imaginatively disrupt the dynamics of child-adult relationships. Both books carefully but unapologetically portray “bad” families and offer children a fantastical way out. In both novels, children learn how to survive and reconfigure kinship.

Dark whimsy suffuses both The Ocean at the End of the Lane and Mermaid in Chelsea Creek, which deal with difficult realities: families struggling to make ends meet, children who feel—and are—neglected, and adults who are willing to harm their young. The narrator of Gaiman’s tale learns early on that “books are safer than people.” Stories function as his “parents and advisers” when the adults who are supposed to fill these roles fail. Sophie, the heroine of Tea’s novel, fantasizes about “orphanages and foster homes for the children of perfectly capable, functional mothers who just took a strong dislike to their offspring” as a way to cope with her distant, vitriolic mother. The grim present of each novel is haunted by painful pasts and hopeless futures. Gaiman’s narrator deals with suicide, his father’s affair, and is violated by an otherworldly creature. Likewise, Sophie’s working-class roots tether her to a place she tries to escape by making herself pass out, an act that transports her to “the world of the dream state … so much nicer, prettier, and more magical than the city [she] spent [her] days in.”

Amidst the darkness, Gaiman and Tea craft tales that are fun, daring, and hopeful without romanticizing childhood. Both novels depart from conventional coming-of-age narratives that are structured by the loss of innocence. From the beginning, the environments in these books are never presented as innocent, and their child protagonists are already intimate with the world’s danger. Instead of awakening them to adult knowledge, their adventures reveal what they already knew.

The Ocean at the End of the Lane is structured around the return of Gaiman’s unnamed narrator, years later, to the home where he grew up. Here, he marvels, “Memories were waiting at the edge of things, beckoning to me. Had you told me that I was seven again, I might have half-believed you.” Nostalgia catapults him back to the time when his 11-year-old neighbor Lettie Hempstock took his seven-year-old self under her wing. Lettie transforms the world he knows; when they wander on her family’s farm, the narrator realizes it defies reality in a way that he cannot quite comprehend. Lettie explains, “Hempstock Farm stretches a very long way. We brought a lot of this with us from the old country, when we came here. The farm came with us, and brought things with it when it came. Gran calls them fleas.” Soon one of the creatures that inhabit this surreal, transported ground escapes and invades the narrator’s life by shape-shifting into the form of a human who goes by Ursula Monkton and presents herself as a housekeeper. Ursula manages to leave the farm in the narrator’s foot while in flea form, and tortures him with this fact as she abuses him: “I’ve been inside you … so a word to the wise. If you tell anybody anything, they won’t believe you. And, because I’ve been inside you, I’ll know.”

Lettie, her mother, and grandmother offer the narrator protection from this “nightmare made flesh.” They make him feel “whole and safe once more” and use their powers to save him, in contrast to the narrator’s family who enable Ursula Monkton’s abuse. When Ursula Monkton eventually drives the narrator’s parents and sister away from him, the Hempstocks become his new family; they invite him into their alternate universe, a wondrous sanctuary unavailable to him elsewhere.

Sophie, the heroine of Tea’s novel, has to come to terms with an ambiguous magical lineage that is both good and evil. It’s the summer before high school in Chelsea, Massachusetts, and Sophie’s detached mother sends her to work at the dump overseen by her grandmother. Sophie has already had visions alerting her to her destiny, in form of a mermaid who tells her, “This is a bad place. … I come to you to help you fix it.” Angel, a new friend she makes at the dump, confirms the reality of Sophie’s visions. From her, Sophie learns that she has the gift of “reading hearts,” to know and feel another person’s deepest emotions. Angel teaches her how to manage this power, explaining to a doubtful Sophie that she’s like “Joan of Arc, and all those girls, you know, there are so many stories. Girls who knew things and had powers and a certain destiny.”

By way of this genealogy, which makes Sophie “part of a bigger family than the one [she] ha[s] here on earth,” Tea provides a new form of kinship for her protagonist. Sophie learns that her grandmother is an evil witch who is determined to hurt her and has made Sophie’s mother unable to love her. Sophie is hurt, but also knows that she has her new “strange crew”—Angel, a mermaid, pigeons, as well as an empathetic Dr. Chen, and a previously unknown relative, Aunt Hennie—who will help her fulfill her destiny; she leaves Chelsea and doesn’t look behind.

MAGIC PERMITS BOTH GAIMAN AND TEA’S PROTAGONISTS TO QUESTION THE SEEMINGLY STABLE, NON-NEGOTIABLE DEFINITION OF FAMILY, REDEFINING FAMILY FOR THEM IN REAL AND MEANINGFUL WAYS.

Both the unnamed narrator of Gaiman’s novel and Tea’s Sophie read as queer, in the sense that Carson McCullers characters read as queer: they feel most like outsiders where they should most feel at home. They have to leave home to find figures with whom they can identify, and those figures are queer folks—misfits, strangers, and animals who don’t abide by the rules. These bizarre characters care for them in ways their families never could. These relations are effected by the books’ use of magic as an enabling device that provides the energy the children need to enter a safer new world where they can learn what they need to navigate the other, more dangerous worlds from which they’ve come and still have to face.

“Magic is real. … Illusions are, in their way, completely real,” Hennie tells Sophie. Magic permits both Gaiman and Tea’s protagonists to question the seemingly stable, non-negotiable definition of family, redefining family for them in real and meaningful ways. These alternative kinship structures allow the children to newly understand where they’ve come from and what kinds of futures they can make for themselves; queer kinship yields previously inaccessible queer futures.

“I liked myths. They weren’t adult stories and they weren’t children’s stories. They were better than that. They just were,” the narrator of Gaiman’s tale says. This assertion also captures part of the magic of both Gaiman’s and Tea’s novels, which I would not want to classify as either adult fiction, YA, or children’s literature, but rather as works that make us rethink the relation between age and knowledge, child and adult, reality and fantasy.

The Ocean at the End of the Lane