Reading as Inoculation
Filmmaker and artist Cauleen Smith has a few books to recommend. Her Human_3.0 Reading List, on exhibit at the Art Institute of Chicago through October 29, contains 57 drawings ... 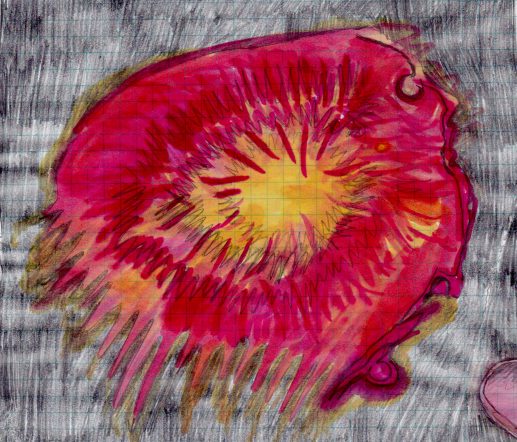 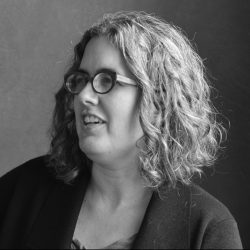 Filmmaker and artist Cauleen Smith has a few books to recommend. Her Human_3.0 Reading List, on exhibit at the Art Institute of Chicago through October 29, contains 57 drawings on graph paper of book covers. The most straightforward of them represent, head-on, the flat front surface of the book. Others show a reader’s hand or fingers cradling or lightly brushing the volume, holding its cover down to draw it, or gripping it as if for dear life. Sometimes a book’s shadow indicates its thickness or suggests its placement on a surface, or the reader’s hand has turned it to show off a fraying binding: these are well-used books. One of them—Claudia Rankine’s Citizen—is lovingly adorned with black glitter.

Smith has selected works by Octavia Butler and Samuel Delany; Roland Barthes, Virginia Woolf, and Yoko Ono; Fred Moten, bell hooks, and James Baldwin. Angela Davis gets a triptych. There are idiosyncratic choices from science, history, and critical theory. Yet the range of authors will come as no surprise to anyone who has followed the versatile artist and filmmaker’s deeply researched work. Across a wide range of media, her art blends tragedy, beauty, humor, kitsch, surrealism, futuristic techno-utopianism, lush indulgence, and historical and political commentary. 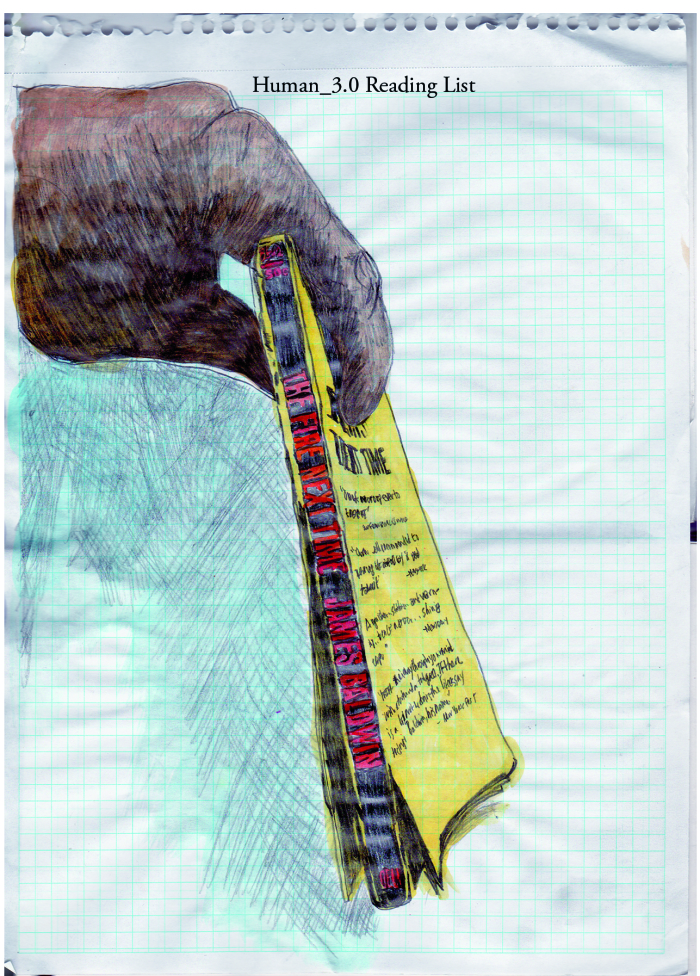 Cauleen Smith, The Fire Next Time (2015). Graphite and acrylic on graph paper. Courtesy of the artist

Her film Remote Viewing (2009), for example, responds to land art of the 1960s and ’70s. Beautifully shot, lyrical, and devastating, it reenacts the memory of how whites in a Southern town buried the lone black schoolhouse in a deep hole. Smith’s approach to history is reflective, slow-paced and thoughtful; the evocative and apparently peaceful imagery of the scene is not contradicted but rather undergirded by a political argument based in historical research. 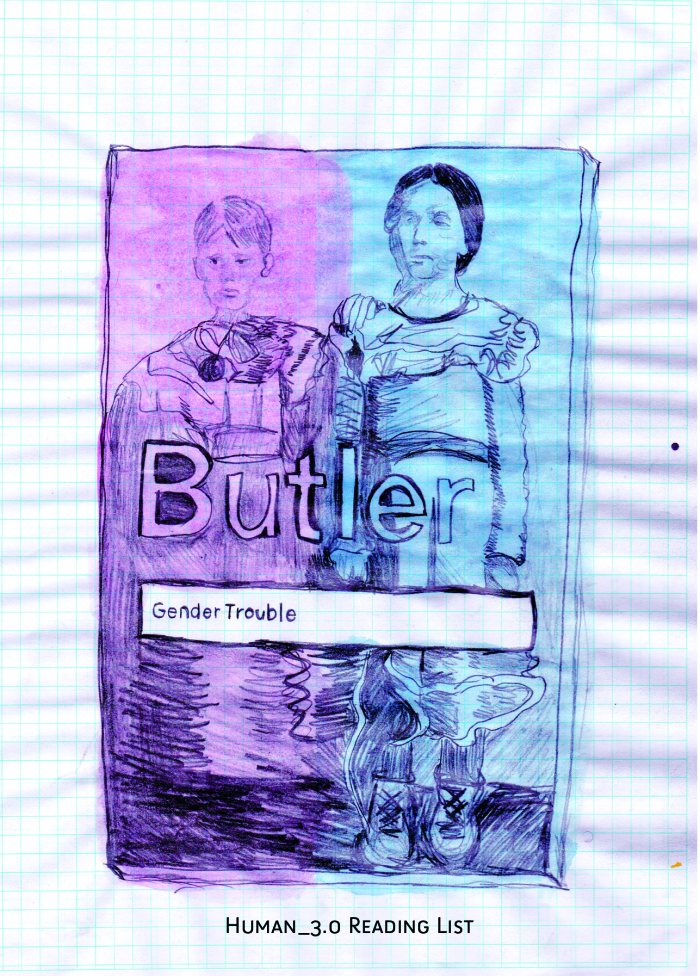 Smith’s title here, Human 3.0, riffs on one of the book selections, a collection of essays about Jamaican philosopher Sylvia Wynter subtitled On Being Human as Praxis. For Wynter, “Man1” is the human of early modern European humanism, whose secularism made “Man” the central focus for philosophical reflection; “Man2” is the overrepresented white Western “man” of scientific racism since the 19th century, the ideology that repressively defines the white man as man itself. 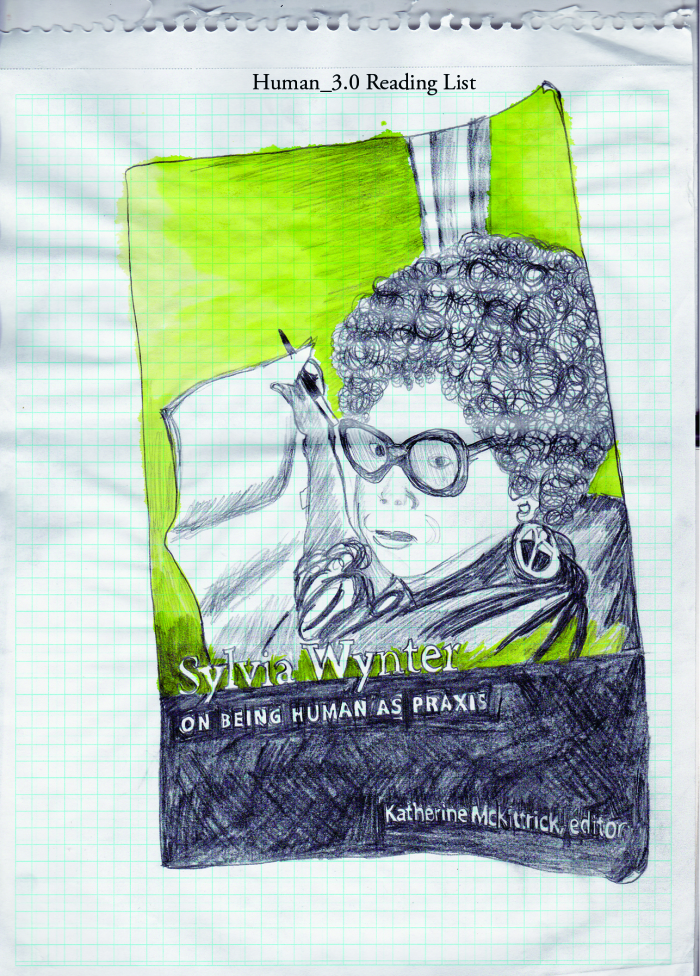 Cauleen Smith, Sylvia Wynter: On Being Human As Praxis (2015). Graphite and acrylic on graph paper. Courtesy of the artist

Human_3.0 takes off from Wynter’s decolonial praxis of humanness; the appended “3.0” also hints at the cyborg theorized by another of Smith’s authors, Donna Haraway. Embedded as human animals are in biological, social, and technological ecosystems, we can’t strip away ideology to achieve a “simply human.” For Smith, 3.0 is the version of human software that this reading list might represent, at a moment in desperate need of change. But not just any change; Smith’s texts suggest foundations to guide the radical imagination toward liberation from racial, sexual, and class oppressions, with a central focus on black liberation. 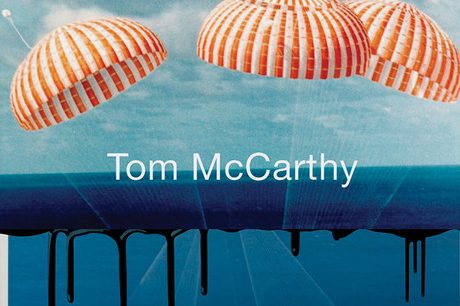 The manifesto that accompanies the project declares that “black people are at war without the proper armor. We require inoculations that repel the seductions of corporate servitude.” A reading list isn’t a quick fix: inoculation requires more than one shot. Smith’s drawing practice itself embodies a more contemplative form of engagement than, say, the activist Twittersphere.

Smith engages not as an activist per se, but as an artist, at an angle. In 2015, she harnessed the organizing skills she developed as a film director to create a Black Love Procession in Chicago’s Washington Park, a response to a white artist’s recreation of Michael Brown’s death scene. An ice cream truck distributed free treats to the neighborhood. Participants handed out flowers and carried banners. One of them quoted the first three words of the last line of Gwendolyn Brooks’s “Second Sermon on the Warpland”: “Conduct your blooming in the noise and whip of the whirlwind.” Human_3.0 shows one role that books might play in that blooming. 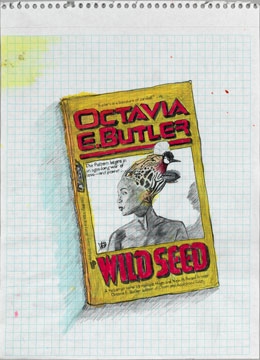 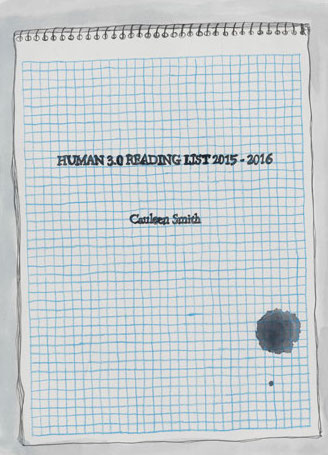