Refugee Stories for Young Readers
Today, more than half of the world’s refugees are children under the age of 18. That’s nearly 50 million young people, making this the worst child refugee ... 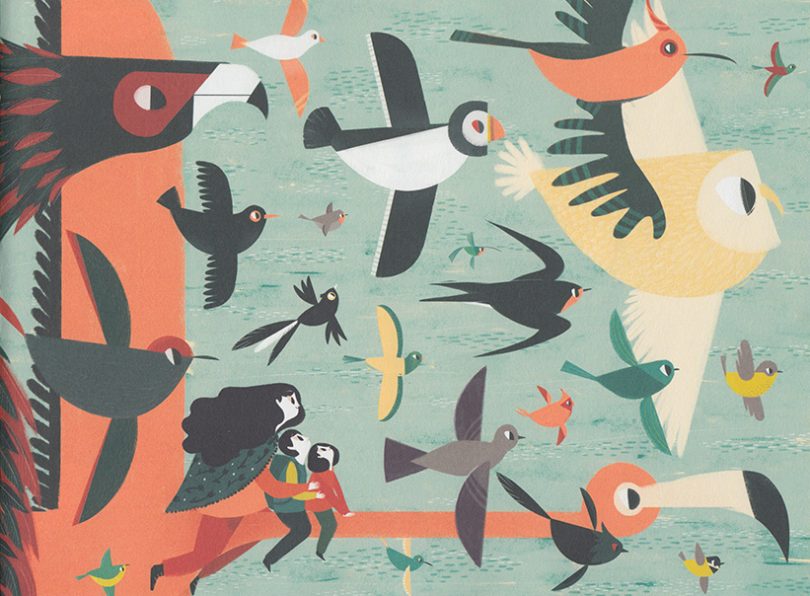 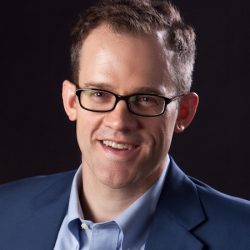 Today, more than half of the world’s refugees are children under the age of 18. That’s nearly 50 million young people, making this the worst child refugee crisis since World War II. These children travel alone and with family, with helpful adults and with predatory ones. They face the risk of exploitation and disease. They need food, clothing, shelter, health care, and education. They also need stories to help them make sense of their geographical and emotional dislocation. Many adults need to read these stories, too. Contrary to the claims of alleged grown-ups like Donald Trump and Marine Le Pen, refugees should not be feared or hated. To reject the refugee is a crime against all humankind because the refugee is the purest representation of our shared humanity. As Hannah Arendt wrote, refugees “have lost all distinctive political qualities,” “lost all other qualities and relationships—except that they [are] still human.”1

She wrote those words after the war. In 1943, Arendt—then a refugee herself—described refugees’ uncomfortable realization that “hell is no longer a religious belief or a fantasy, but something as real as houses and stones and trees.”2 As Francesca Sanna’s The Journey demonstrates, the children’s picture book is the ideal medium for voicing that unsettling feeling when something unbelievable suddenly becomes true. Its visual metaphors render difficult emotions clearly, and illustrate children’s literature’s ability to express dark realities in the language of the fantastic.

Readers unfamiliar with the range and complexity of children’s literature may be surprised that a picture book would tackle such an upsetting subject. However, as Maurice Sendak (himself the son of Polish immigrants to the US) pointed out, “children know a lot more than people give them credit for. Children are willing to deal with many dubious subjects that grownups think they shouldn’t know about.”3 Fittingly, then, there are many picture books about refugees. All convey how displacement—physical, emotional—uproots the self, separating children from their childhoods, sometimes even from their lives. In Morten Dürr and Lars Hornemann’s Zenobia (2016), from Denmark, rough seas knock the unnamed main character from a boat full of refugees. As she drowns, memories narrate her life up until this moment, including her mother’s inspiring tale of the warrior queen Zenobia. In the final pages, the child’s now blue corpse drifts down past a sunken boat also christened Zenobia. However, most children’s books about refugees grant the main child character life—albeit one shaped by uncertainty and dislocation. In the first few pages of Belgian author-illustrator Claude K. Dubois’s Akim court (2012; Little Akim), Akim plays peacefully with other children on the river bank, then explosions send people running and bombs destroy his home. Akim spends the rest of the book seeking refuge amid war’s chaos, hoping to be reunited with his family. The unnamed little girl of Jairo Buitrago and Rafael Yockteng’s Two White Rabbits (2015, translated from the Spanish by Elisa Amado) travels with her father, crossing a river, riding the rails, fleeing armed border guards, walking along a highway. She, too, lacks a home and any clear destination. “Where are we going?” she asks sometimes, but no one answers her. As The Journey’s familial trio travels into the unknown, fear and longing also propel them forward, away from who they were and what they knew. (Perhaps indicative of a cultural or national reluctance to trust children’s need for frank conversation about difficult subjects, all of these stories first appeared in languages other than English.4)

Sanna, an Italian illustrator and graphic designer living in Switzerland, avoids presenting the family’s journey in a too emotionally charged manner, but she also does not sugarcoat her truths. The Journey delivers a sharp jab right away, first offering the briefest glimpse of normalcy, then destroying it. The opening two-page spread, in warm colors, introduces a family spending the weekend on a beach’s light pink sand, amid miniature buildings that can be read both as their city and as sandcastles created by daughter and father. At water’s edge, the son stares at a fish, while mother glances up from her book. The very next two-page spread shatters this tranquil scene, as our narrators—the two children—announce, “The war began.” The small patch of darkness representing the sea (on the previous two-page spread) now expands into a menacing creature, overtaking the entire right-hand page, giant shadowy hands destroying buildings and reaching left, toward the now-fleeing family. Enhancing the shock of sudden blackness, Sanna reverses direction. In picture books, characters typically move from left to right, but her family of four is now fleeing off the left edge of the left page. Narrative progress —like the family’s lives—is out of joint. 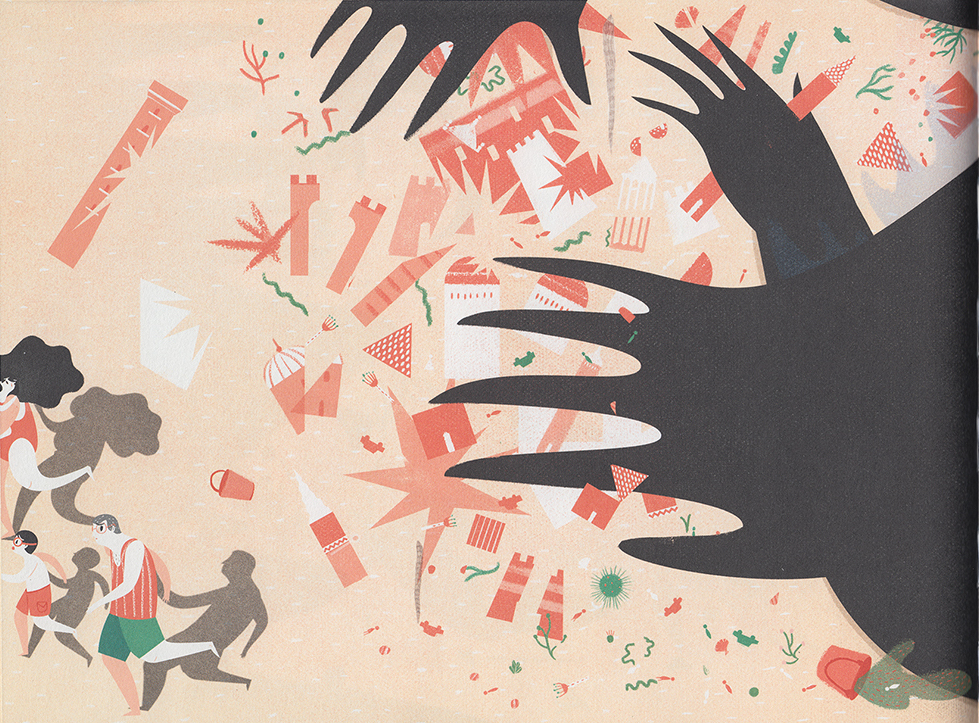 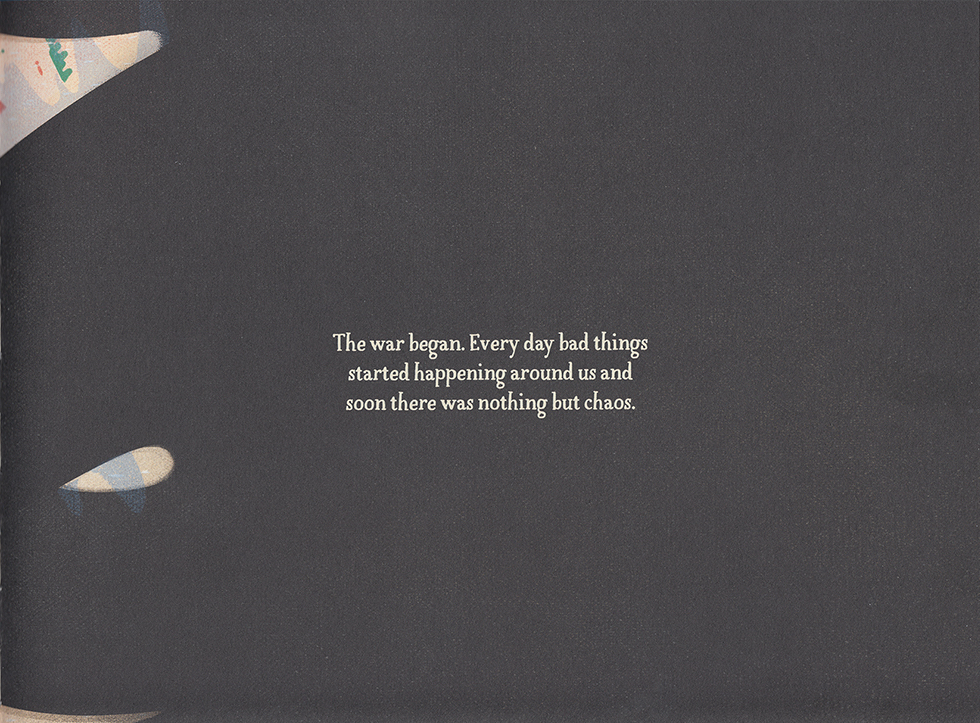 In the life of the refugee, radical uncertainty replaces stability, as the taken-for-granted gets taken away. Following the shock of war, Sanna unfurls two pages of blackness, interrupted only by white text disclosing, “And one day the war took my father,” juxtaposed against emblems previously associated with him: his sunglasses, two halves of a destroyed sandcastle, some seaweed and a sea cucumber. Do these fragments represent memories smashed by war or are they evidence of his death? Does “the war took my father” indicate conscription into the army or being killed? His failure to return to the narrative after this point suggests the latter, but the book does not clarify further. Either way, the children’s comfortable family life has become fragile and uncertain even before they seek a safer haven. 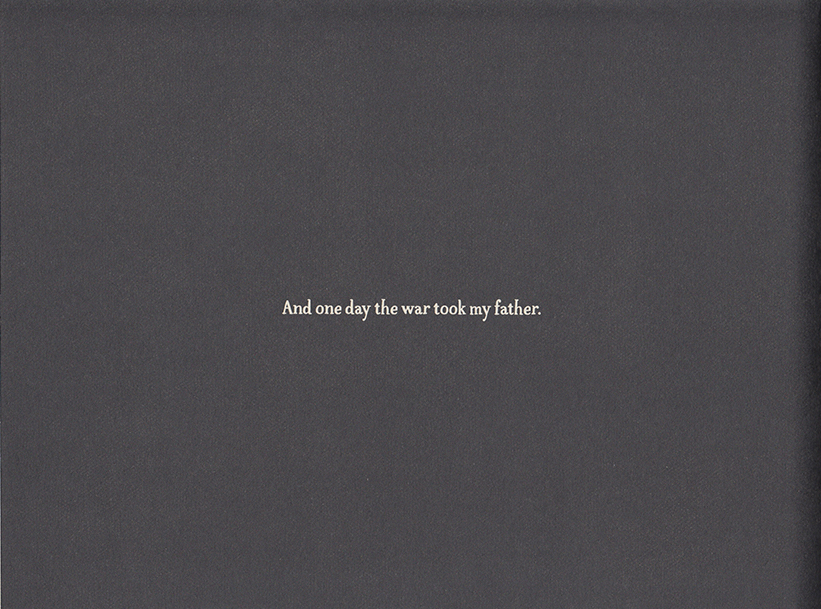 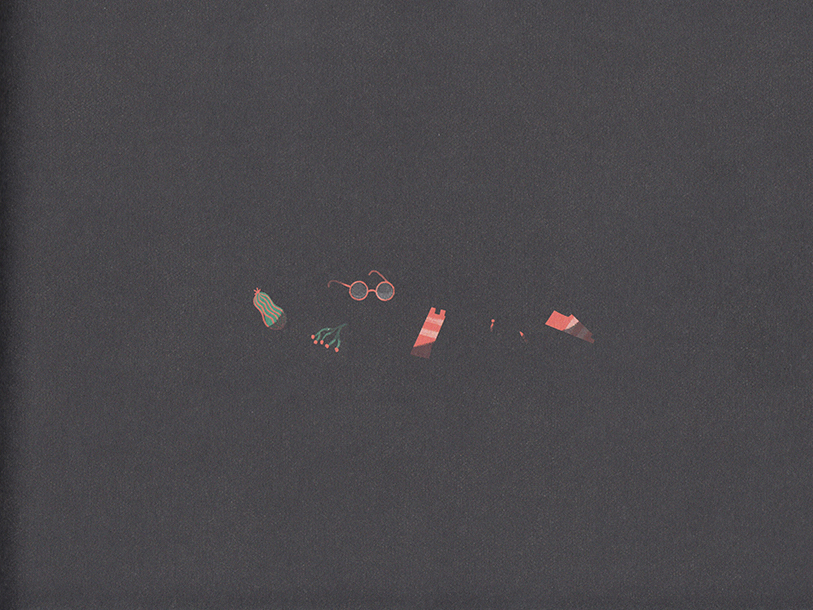 Sanna renders these experiences in visual tropes drawn from fairy tales not only because, as Sendak observed, “In fairy tale and fantasy we reconstruct and defuse dreadful moments of childhood,” but also because fairy tales cover a wide emotional range via succinct, powerful tropes—a sneaky wolf, a cursed prince, or a magical godmother.5 Drawing from this narrative shorthand, Sanna builds The Journey’s realism in a fairy-tale landscape of sympathetic animals, giant guards, and dark forests. Just before they leave home, the mother tries to answer the children’s questions about the “safe place” they will seek: “She shows us pictures of strange cities, strange forests and strange animals until she finally sighs, ‘We will go there and not be frightened anymore.’” Sanna’s picture finds the family reading, encircled by a menagerie of animals whose rounded bodies blend into the landscape and one another: bears, owls, rabbit, deer, reindeer, wolf. The image is both comforting and worrying. The warm colors and animals’ roundness make them feel protective, but their size also dwarfs that of the family, huddled together on a tiny couch in the middle of the picture. 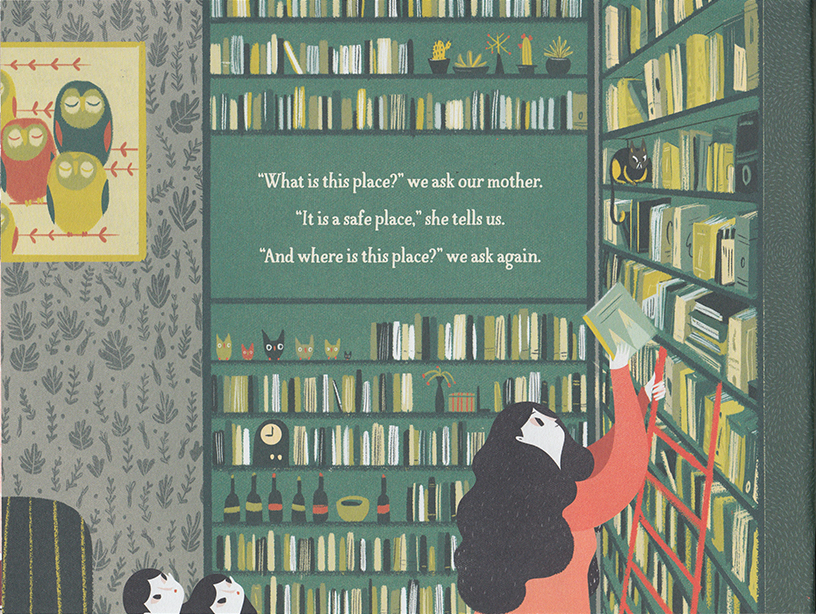 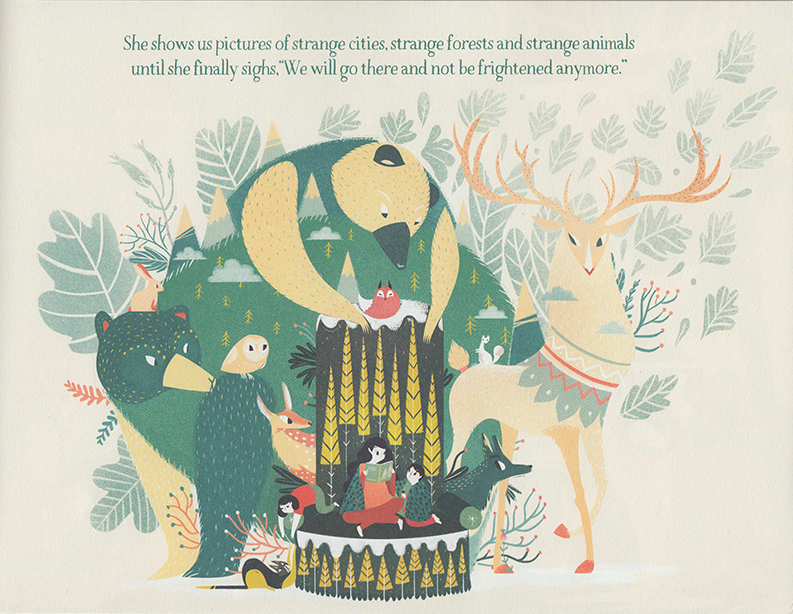 Sanna populates her pages with many different birds, who not only figure in lots of fairy tales but are also known for being migratory, a word that at the turn of the 17th century referred only to animals, but that by the 19th frequently referred to people. Owls emerge in the books the mother shares with her children. A shifting array of black, gray, yellow-and-green, and green birds bear witness to the family’s voyage via car, trucks, and bicycle. Birds then disappear for 10 pages of dark woods, red-bearded giant guards, and a nighttime border crossing, finally returning—in flocks—for most of the book’s remaining pages. Their sudden disappearance attests to the emotional and literal darkness engulfing the family: on these pages, hope recedes and fear encroaches. The birds’ presence at the beginning and end of the story suggests that all living creatures have the right to travel unimpeded by national borders. Near the end, our narrator notices them overhead, “migrating just like us. And their journey is very long too, but they don’t have to cross any borders. I hope, one day, like these birds, we will find a new home.” Accompanying these thoughts, Sanna displays a page full of many different birds flying in one flock, the refugee family riding on the neck of a giant flamingo. 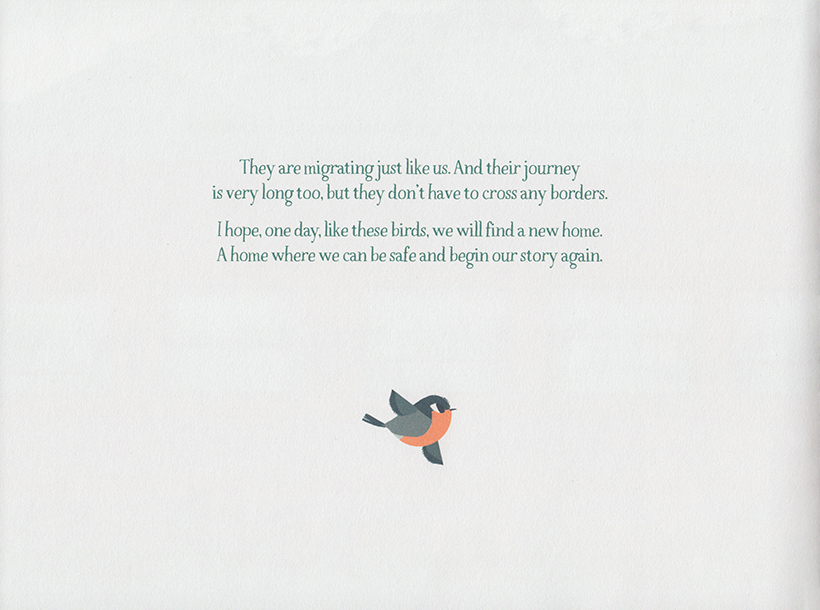 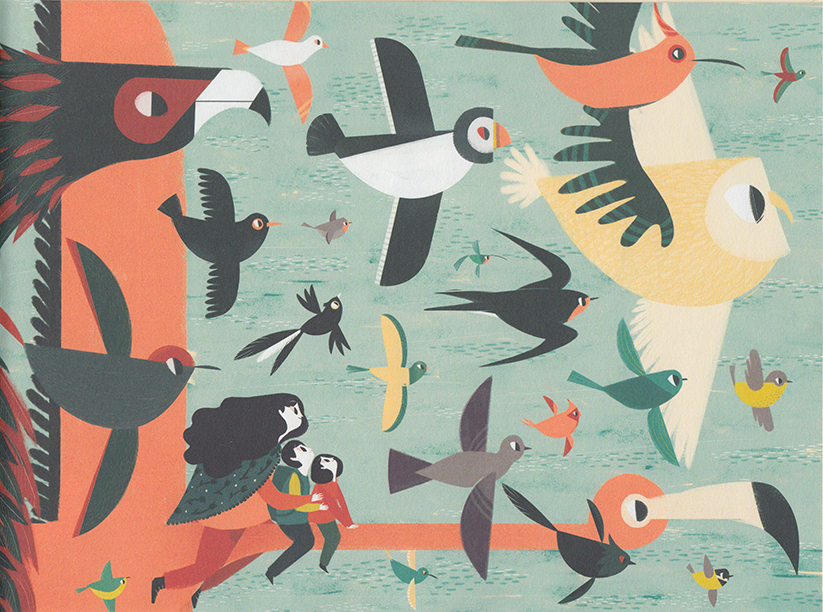 The many species of birds not only invoke the diversity of humankind, but also figure the avian migrant as a symbol for universal human rights. Unlike people, the birds’ freedom has never depended upon citizenship. In this sense, Sanna visually invokes Giorgio Agamben’s Arendt-inspired observation that the refugee, stripped of nationality, is the most powerful example of our shared humanity: refugees are “people who have really lost every quality and every specific relation except for the pure fact of being human.”6 As such, Agamben argues, they expose the immorality of basing human rights on nationhood, and challenge not only nationalism but the nation-state itself. The stateless expose the fiction of statehood. The refugee, he contends, should therefore form the basis of a new political philosophy—one that values humanity more than nationality.

By not explicitly making this argument, but instead distilling its ideas into resonant images, Sanna makes Agamben’s case at a deeper, affective level. As the family changes from citizens to refugees, The Journey begins visually to pare them down—much as a fairy tale pares down narrative into its essential components (basic setting, central conflict, defining character traits). A stack of 18 suitcases in the capacious foyer shrinks, on the next page, to whatever fits in a car with two children in the backseat and the mother driving: four suitcases on the roof, one in the passenger seat, and an unknown number (but surely less than the remaining 13) in the trunk. On the next page, the family huddles amid pottery and ferns in the back of a truck driven by someone else. Turn to find, on the left page, the family amid fruit in the back of a van, and, on the right, mother pedaling a bicycle attached to a small open cart containing the two children and one suitcase. Accompanying these pictures, the narrator reports “The further we go … the more we leave behind.” After this, they proceed on foot. Reducing them to three dispossessed people makes their losses—of father, home, possessions, security—tangible. All these people have are themselves. 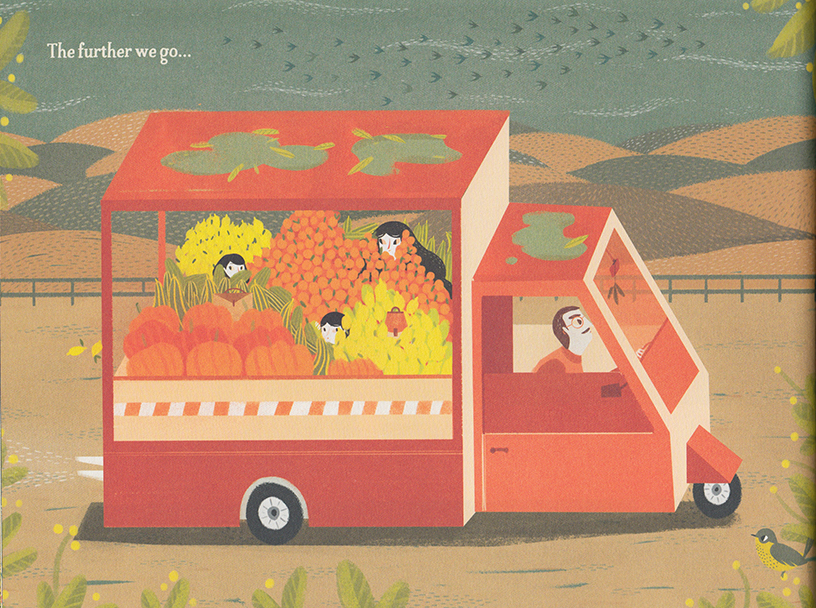 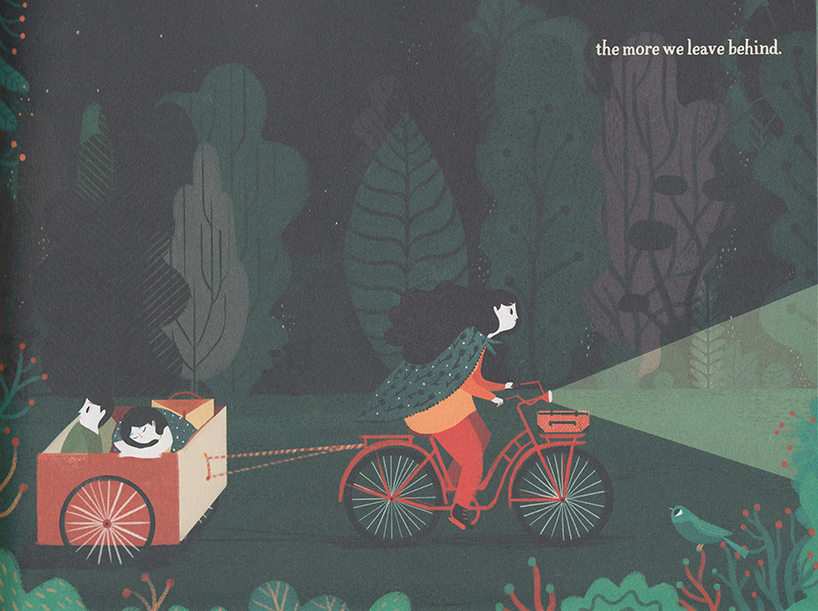 Reading The Journey, it’s impossible not to think of the over six million Syrian refugees, and the generous countries (like Germany and Turkey) that are welcoming them in large numbers, as well as the more heartless countries (like the US and the UK) that admit far fewer. As of this writing, Germany (population 82 million) has admitted 600,000 Syrian refugees; the United States (population 324 million) has admitted 16,000. In January, President Donald Trump suspended the Syrian refugee program indefinitely, falsely claiming that doing so would help protect the United States from terrorism. (Of the three million refugees admitted to the US since 1980, not one has been convicted of an act of domestic terrorism.) Using the same racist logic, Mr. Trump has twice attempted to ban travel from some Muslim-majority countries. Though federal courts blocked both attempts, his administration’s aggressive xenophobia has inspired some who had sought refuge in the US to instead trek across the snowy northern border into Canada. In our contemporary moment as in Sanna’s book, the refugees’ needs continue to exceed the humanitarian response. At the end of The Journey, the family’s journey has not ended: they still seek “a home where we can be safe and begin our story again.” If their incomplete quest for safety cultivates younger readers’ empathy, perhaps it will also nudge the consciences of the adults in their lives, inviting them to refuse the lie that humanity is dependent upon statehood. As Sanna reminds us, humanity has no borders. 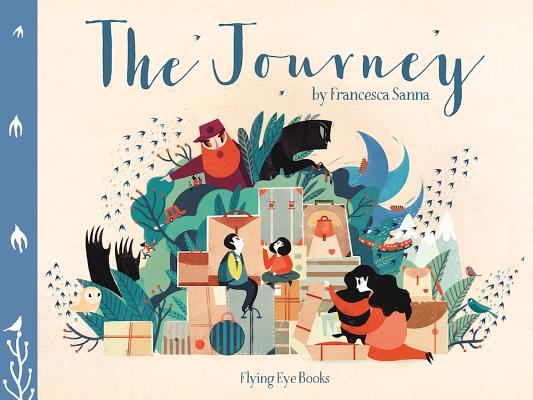