Respect
“You don’t have character—you’re just handsome.” When Mathis lobbed this home truth at Don Draper a couple of weeks ago, he could have been talking about the show itself. Does Mad Men have ... 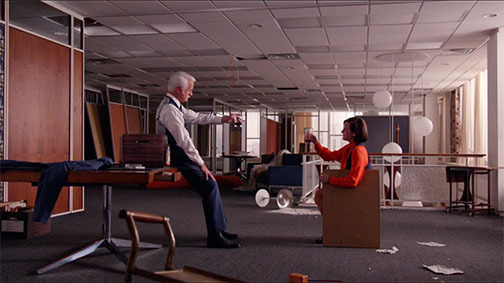 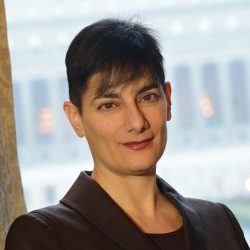 “You don’t have character—you’re just handsome.” When Mathis lobbed this home truth at Don Draper a couple of weeks ago, he could have been talking about the show itself. Does Mad Men have characters, or does it just look good?

Until last night, the last half of the show’s final season had left many dedicated viewers worried that Mad Men was going to fail to build to an engaging conclusion, let alone a meaningful one. “New Business” (April 12, 2015) was one of the weakest episodes in the show’s history. I rather liked “Severance,” which opened the show’s final half-season on April 5, 2015, but it left Bruce Robbins craving assurance that the show is “not just a soap opera for people who would never watch soap operas. (It’s not, right?).”

I’ve always found the show’s debts to women’s genres to be one of its strong suits, so I wouldn’t blame its rocky start this past April on its family resemblance to soap operas. Instead, I’d offer two reasons for the decrease in narrative tension and tone.

The first is the absence of the flashbacks that defined the show for the first six seasons. Those flashbacks slowly revealed Don’s backstory in one of the longest expository stripteases in television history. Carefully titrated doses of the past substituted for Don’s lack of character in the present; like his affairs with smart, interesting, complicated women, flashbacks made Don’s bad behavior seem more interesting by presenting it as a disruption of the normal flow of things. They suggested that Don had reasons for acting the way he did, and that if we kept watching, we’d understand that there was more to him than the silhouette in free fall we see tumbling through the credits.

But there have been no flashbacks in sluggish season 7, and now that Dick Whitman has run out of past, Don Draper doesn’t seem to have much of a future. His only recourse is to repeat himself. When McCann head Jim Hobart tells Roger Sterling that Don walked out of a meeting and hasn’t been seen for days, Roger shrugs: “He does that.” In the episodes directly preceding “Lost Horizon” (May 3, 2015), Don seemed like he had drifted so far from his roots that he had in fact turned into Roger: both play golf, both buy off young ex-wives who are also their former secretaries, both have daughters who hate them. Don has become just another poor little rich guy in a penthouse, even if, as Sally told her friends two episodes ago, “he grew up very poor.”

“Lost Horizon” also represents a return to form, if not to flashbacks, because it solves the second problem that has bedeviled the show these past weeks: a relative lack of dramatic conflict and narrative momentum. The last four episodes presented us with characters who seemed to have nothing left to fight for, but in this episode, many of them are back in the saddle, battling for respect and contending with the loss and gain of face.

At several points in the episode, the camera zooms in almost propulsively for a close-up that registers how a character responds to an insult or regains a sense of self. 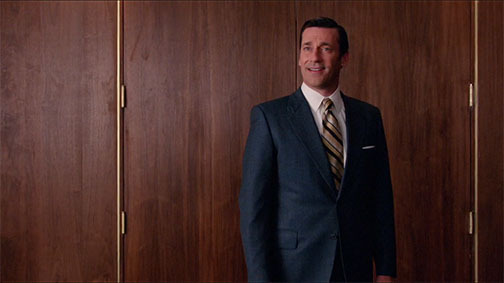 Here is Don smiling tightly after his new boss Jim Hobart tells him, “When I want something, I get it,” and then asks to hear Don say, “I’m Don Draper from McCann Erickson.” 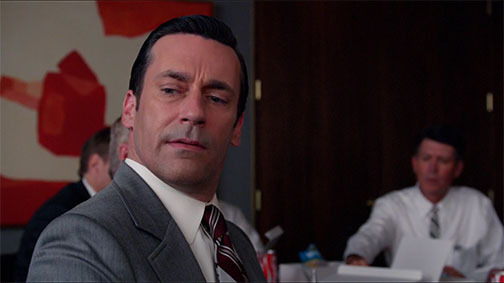 Ten minutes later, the camera glides up to Don’s face, just after he has glimpsed a plane flying past the Empire State Building and just before he decides to pull a Jack Kerouac and head into the Beer Belt to find the elusive Diana Baur. 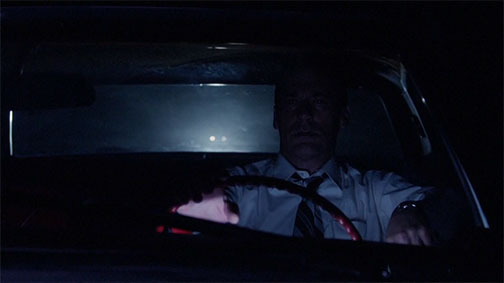 And here is Don, the beatnik in the gray flannel suit, on the road, the play of light and shadow providing the texture that earlier episodes relied on flashbacks to construct. 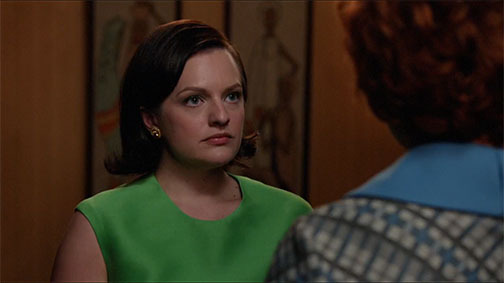 Here is Peggy after learning she has been assigned a spot in the secretarial pool at McCann: “I am a copy supervisor. I am not setting foot in there until I have an office,” she tells her secretary Marcia, who promises to solve the problem, and does. 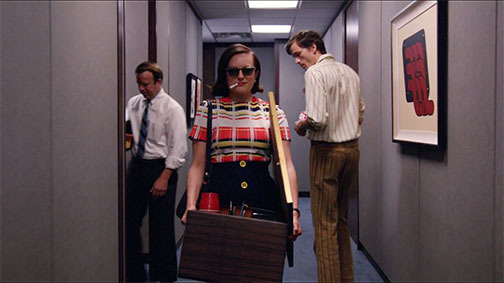 And here is Peggy, close to episode’s end, about to step into her new McCann office.

For Joan, the trouble starts when a young man at McCann challenges her authority on the Avon account: “Who told you you got to get pissed off?” Joan turns to a company honcho named Ferg Donnelly for help. He tells her, “You’ll certainly get the respect you desire now that it’s just you and me,” but it quickly becomes clear that despite the wedding ring glinting on his meaty left hand, he wants her to have sex with him in exchange for his “benevolence.” 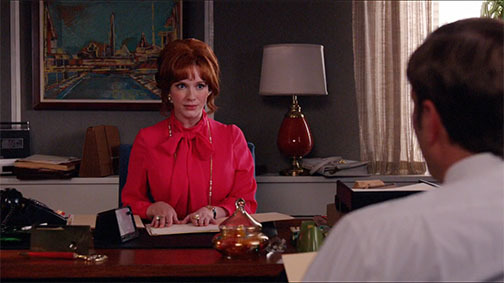 Here is Joan’s face after he says, “Look: I know a good job when I see one.” 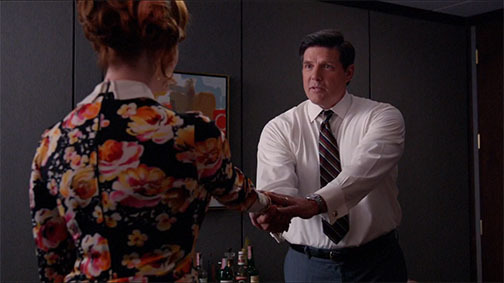 After a crescendo of increasingly lewd double entendres—“I’m not expecting anything more than a good time”—Ferg shakes Joan’s hand, then clasps her wrist, an image of capture echoed in the bangles we see Joan wearing in many of this episode’s scenes: “From now on, no one comes between me and your business.” 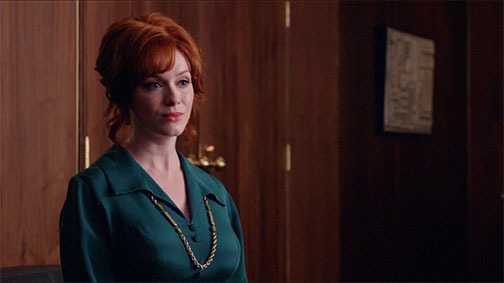 But here is Joan later in the episode, staring down Jim Hobart in a showdown to which we will return.

Where flashbacks provide temporal depth by layering past and present, close-ups suspend time and charge the present with emotion. All of these close-ups revolve around the question of whether characters will be able to obtain respect and hold onto status and autonomy. That question points to the broadest one that this historical soap has been posing from the outset: will anything change? From the viewer’s 21st-century vantage point, that question has always constituted a flashback, since it prompts us to conduct a retrospective survey of the last 40 years in which we ask ourselves, has anything changed? 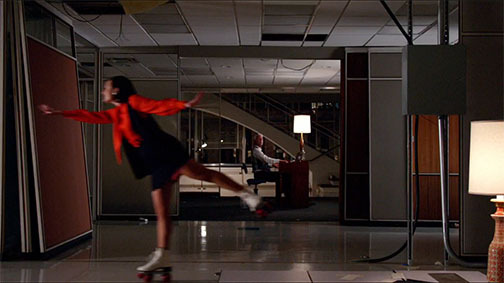 In some respects, “Lost Horizon” offers little ground for optimism on the change front. It shows characters who have trouble moving forward. For much of the episode, Roger and Peggy remain stuck in their old office, and at one point we see Peggy roller-skating in circles around the empty corridors of her old firm, an emblem of perpetual motion without progress.

On the other hand, where past seasons gave Don flashbacks, “Lost Horizon” gives Betty, Joan, and Peggy do-overs, in which each gets to rewrite a moment of degradation from earlier in the show’s history. 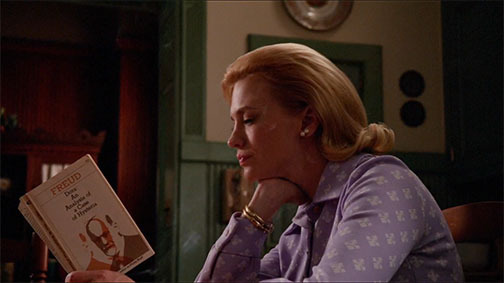 We see Betty, who has enrolled in school, sitting at her kitchen table reading Freud’s Dora: An Analysis of a Case of Hysteria. In Season 1, Betty’s analyst refused to take her seriously and betrayed her trust by colluding with her husband; now she’s reading psychoanalytic case studies while studying for a master’s degree. Working conditions have not improved much for the African American servant who wears a maid’s uniform and whom Betty addresses peremptorily as “Loretta,” but Betty inches along, literally shrugging off Don’s half-hearted attempt to seduce her.

“Lost Horizon” returns Joan to the primal scene of prostitution that enabled her to become a partner in Season 5. During her first week at McCann, Joan quickly loses the ground she had gained. When she explains to Jim Hobart that “As a partner, at SC&P, I had a certain amount of status. You know, more independence,” he retorts, “Joan, it may not have sunk in, but your status has changed.” In a scene we’ve been anticipating for eight years, she threatens to sue, with the help of the Equal Employment Opportunity Commission. His response: “You’ll be all alone.” Hers: “No. I think the second I file a complaint, I’ll have the ACLU in my office and Betty Friedan in the lobby with half the women who marched down Fifth Avenue. I guess you didn’t see the headlines about what happened at Ladies’ Home Journal or Newsweek.”

Like Lee Marvin in John Boorman’s film Point Blank (1967), Joan just wants her money back. It’s disappointing when she caves the next day and accepts the $250,000 that McCann sends Roger to offer her again, but it’s also realistic. Unlike Lee Marvin, Joan doesn’t have a gun, and unlike Betty Friedan, she has never started or joined a movement, not even the micro-movement offered early in “Lost Horizon” when two female McCann copywriters invite her to join their “informal ladies’ club” for “consciousness-lowering” drinks. A sudden metamorphosis into a feminist Joan of Arc would have been even harder to credit than the fairy-tale romance she has been enjoying with the real estate developer she met in “New Business.”

Joan may not drive history forward, but she herself does not fall back to square one. Like many privileged white women in our own day, she has worked twice as hard to get half of what she was actually worth, but given her wealth, the injustice is more irritating than tragic. Joan can now afford to turn down financial propositions from men who don’t attract her, she has money enough to raise her son even if things don’t work out with the millionaire developer, and when she leaves McCann, she takes her Rolodex with her. 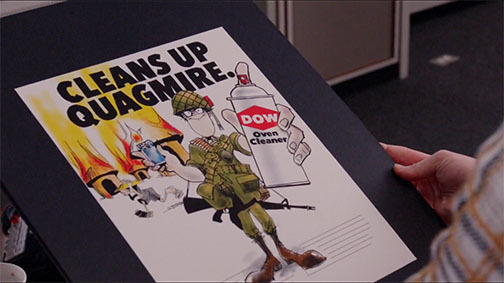 And Peggy? She spends several days haunting her former office. We get a reminder of the relatively low stakes of the privileged white woman’s bid for respect when she demands that Ed do some work during his last paid week at the old firm and he creates an image of a soldier holding a can of Dow oven cleaner in one hand, a lighter in the other, with villagers fleeing burning houses in the background. “Cleans Up Quagmire” is the tag line—or should that be quagmires?, Ed asks. Peggy’s no Joan of Arc either; her response to Ed’s political satire expresses the depths of her complicity with the Man: “Ed! You could easily end up working for Dow Chemical again!” As Peggy’s leftist boyfriend reminded her when she complained about not being allowed to play golf with male clients, no one is shooting at her when she tries to vote, or attacking her Upper West Side apartment with napalm. On the other hand, if Peggy can’t manage to obtain the trivial respect due her as a seasoned copywriter, it’s hard to be optimistic about the success of weightier battles for justice. 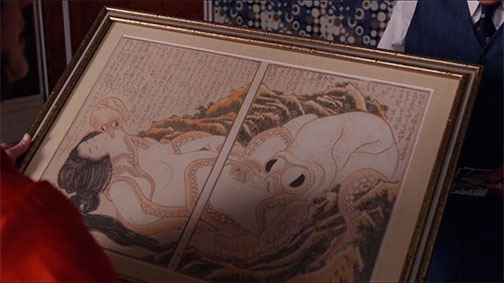 While Peggy and Roger share the longest conversation they’ve ever had, over a bottle of Cinzano in his tattered office, he offers her something to decorate her new digs: Bert Cooper’s Japanese print of an octopus “pleasuring a lady,” which made its first appearance back in Season 3. Peggy demurs, saying, “You know I need to make men at feel at ease.” Roger snorts: “Who told you that?” On her first full day at McCann, she takes his point to heart. We see her walking down the hallway in a short colorful dress, wearing sunglasses indoors, a lit cigarette hanging from the side of her mouth, looking like a cross between Megan, Joan, and Don as she boldly lets the octopus image face out for all to see. 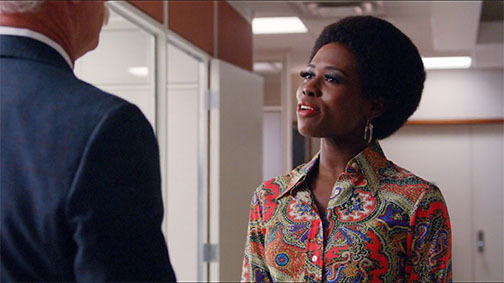 This tracking shot is an obvious counterpoint to Peggy’s first appearance on the show in Episode 1, when she wore a mousy outfit, walked meekly behind Joan through Sterling Cooper’s original offices, and silently endured Pete’s sadistic inventory of her physical flaws. Now Peggy moves confidently, even aggressively, towards a mobile camera that smoothly retreats before her. Let’s hope Ferg doesn’t get too interested. After all, as Shirley, Roger’s African American secretary, tells him just before she shakes his hand and thanks him for having been “very amusing,” she won’t be moving with him to McCann, because “Advertising is not a very comfortable place for everyone.” She’s off to work for Traveler’s Insurance. I’m looking forward to that spin-off.