Return to the Fold
At first glance, Rectify may seem like another variation on that favorite TV conceit of recent years: a damaged, asocial male struggles to reconcile with the modern world (see Breaking Bad, Mad Men ... 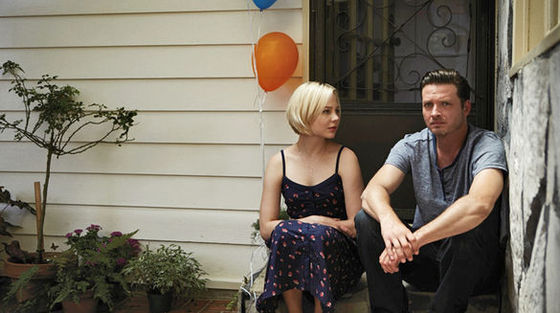 At first glance, Rectify may seem like another variation on that favorite TV conceit of recent years: a damaged, asocial male struggles to reconcile with the modern world (see Breaking Bad, Mad Men, The Sopranos, True Detective—the list goes on). And in broad outline, this Sundance Channel (now SundanceTV) original about a recently released death row inmate, Daniel Holden, is just that: the brooding tale of an abused psyche emerging after 19 years of incarceration into a small Georgia town that wants him dead. But Rectify is far from another cri de coeur of aggrieved white masculinity. With a languorous pace that slowly unfolds depths of character and mystical resonances more reminiscent of Werner Herzog’s films than television drama, Rectify depicts a wounded community groping toward some kind of wholeness.

In the second season, which premiered this past June 19, Aden Young continues in the role of Daniel, a spiritual prodigy and autodidact who was forced to discover “inner peace” between gang rapes and solitary confinement. Convicted at the age of 18 for murdering his teenage girlfriend, Daniel has been released thanks to new DNA tests that revealed prosecutorial misconduct—a technicality, in other words, though there were plenty of other suspects for the crime.

In the first of 10 new episodes, Daniel lies in a coma after a vicious beating at the hands of vengeful locals, including the brother of the girl he is said to have killed. Surrounding Daniel are his guilt-racked mother (J. Smith-Cameron) and his sister Amantha (Abigail Spencer), who have suspended their own lives to champion his. As Daniel relives the death of his friend Kerwin (Johnny Ray Gill), his only companion on death row, his sister-in-law Tawney (Adelaide Clemens) and step-brother Ted (Clayne Crawford) plod through a marriage that has been undermined by Tawney’s attraction to Daniel and by Ted’s suspicion. Bolstering the show’s Southern Gothic overtones, meanwhile, are the local officials who hope to lock Daniel up again, setting the show on a razor’s edge of tension at the prospect of the town once again imprisoning a possibly innocent man.

The above describes something like the plot engine for the new season, but if the second is anything like the first, pot-boiling is far from the point.

Rectify has been alternately praised for its complex characters and ambience1 and savaged for its slow, sometimes self-indulgent development.2 But the indulgence with time is its triumph, paring away plot machinations to make room for formal pleasures: the arrangement of scenes and fields of color that juxtapose lush green with the overexposed white of prison; or particles dancing through shafts of light, which is itself nearly a second protagonist in the drama; or the languid involutions of Daniel’s speech, which carry the residue of strenuous thought and make the Schopenhauerian bluster of Matthew McConaughey in the recent True Detective look like cartoonery.

Beneath Daniel’s timidity and earnest intellectualism—he discusses art with strangers at a museum; playfully alludes to deconstruction and that which “speaks with its absence”—there is bewilderment, rage, and something unexpected: joy. This is surely part of what makes the series so hypnotic. We thrill to the pleasure (and discomfort) of watching Daniel revel in being, in his mere existence on earth, especially when by rights he could tell the Camus of The Myth of Sisyphus to go to hell. The victim of an absurd universe by most measures, Holden maintains a capacity for enjoyment that has nothing to do with the easy gratifications of consumerism. (Though consumerism certainly provides for some enjoyable moments of ridiculousness, as in his quizzical encounter with “Smart Water”—“Does this work?” he asks a convenience store clerk—or in his fixation on redesigning the kitchen in his childhood home.) In Daniel we discover anew how powerful even minute aesthetic experiences can be, and how transformative.

But then, over it all, there lingers doubt: was Holden guilty? And even if he wasn’t a monster when he went into prison, might he have become one while there? Notwithstanding the scattering of several new plot threads awaiting development, the show appears to have little interest in the “truth” of the original crime; to be less preoccupied with epistemological certainty, let’s say, than in tracking how violence spreads. The show’s title—Rectify—may allude to Daniel’s own attempt to make good for a terrible crime, or just as easily to the efforts of the community to atone for imprisoning an innocent man. The malleable category of guilt, as Daniel’s coma reminds us, can justify and perpetuate evil in its own right.

In this context, it is tempting to understand Daniel’s story as a pursuit of redemption—legal, moral, or spiritual. But he does not seem to crave redemption, exactly, nor does he seek to redeem; instead he wants simply to live among others, and to figure out what that properly means. This emphasis on living is likewise an emphasis on community, on rebuilding the connections that violence destroyed. Pleasure (or wonder) in existence, the show makes clear, is by no means a merely individual affair.