Revisiting the PEN–Charlie Hebdo Controversy One Year Later
When free expression is reduced to an abstract principle rather than a concrete strategy of advocacy, it becomes easier for states to take repressive actions ... 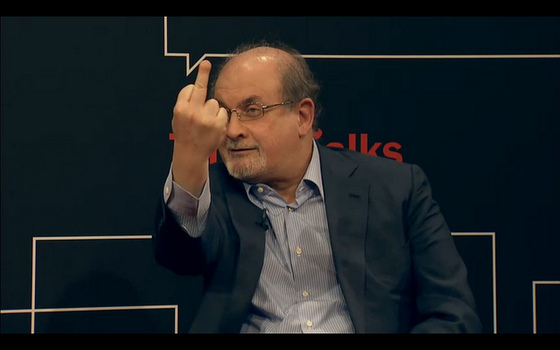 Last April, the American chapter of the writer’s organization PEN received a letter signed by over 200 of its members protesting PEN’s decision to present Charlie Hebdo with their annual Freedom of Expression Courage Award. In their letter, the group claimed that by giving Charlie Hebdo the award, PEN was “not simply conveying support for freedom of expression, but also valorizing selectively offensive material: material that intensifies the anti-Islamic, anti-Maghreb, anti-Arab sentiments already prevalent in the Western world.” Several signatories expanded the political critique of the PEN American Center and its executive director Suzanne Nossel, who had previously served in the Obama administration. For instance, Keith Gessen charged that PEN was “playing along with the larger American geopolitical project.”

In the debate that ensued, one thing became clear: there was confusion on both sides about what exactly counts as free expression or censorship in today’s world. Even for staunch supporters of PEN and its mission to “defend writers endangered because of their work,” the organization’s vague definition of free expression presents a dilemma. When free expression is reduced to an abstract principle rather than a concrete strategy of advocacy or legal persuasion, it becomes easier for states to take repressive actions even as they trumpet the cause of free expression.

As a result, the principle of free expression is increasingly vulnerable to radical critique, as demonstrated in the new book The Event of Charlie Hebdo: Imaginaries of Freedom and Control. Many of the essays in this volume provide examples of how the French state has used Enlightenment symbols to legitimize repressive police actions, especially against populations who fall outside of a Eurocentric “moral community of free speech.” In other words, while many French citizens are busy misquoting Voltaire on social media, their government is violating the speech rights of other citizens, many of whom are Muslim, in the name of fighting terrorism. In the year since the Charlie Hebdo attacks it has therefore become less obvious who exactly is doing the censoring. 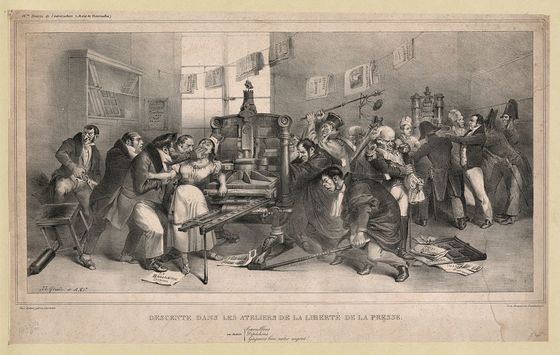 Raid on the workshops of the freedom of the press, J.J. Grandville, ca. 1832 / Wikimedia Commons

The term “censorship” has never had a single definition, but it has usually been theorized as a function of the state rather than as a consequence of violent acts committed by radicalized individuals. In his recent book Censors at Work: How States Shaped Literature, the historian Robert Darnton places the modern state at the heart of his definition of censorship. Although Darnton does not claim to be a social anthropologist like the authors of The Event of Charlie Hebdo, he adopts an approach to the history of censorship that he describes as “both comparative and ethnographic,” providing “thick descriptions” of censorship systems under three distinct authoritarian regimes: the Bourbon monarchy in 18th-century France, the British Raj in 19th-century India, and the Communist dictatorship in 20th-century East Germany.

Certainly, censors understood privilege to be an exercise of power and control, but they also saw their work as a form of positive endorsement and creative participation.

Ingeniously, Darnton focuses on the work that censors do rather than on the most well known cases involving the champions of free speech. In Bourbon France, we spend much more time with the bookish censors who reported to the aristocratic director of the royal book trade administration, C. G. de Lamoignon de Malesherbes, than we do with Voltaire or the philosophes. Rather than a crude system of repression, censorship in 18th-century France was a complex process of negotiation and collaboration between writers and censors organized around the principle of royal privilege. Certainly, censors understood privilege to be an exercise of power and control, but they also saw their work as a form of positive endorsement and creative participation.

The imperial authorities of the 19th-century British Raj also conceived of their work in positive terms. When British Imperial agents set up a vast census of all printed material in the Raj, they initially thought they were promoting freedom of the press and encouraging the development of Indian literature. But after a series of uprisings in 1905, this system of surveillance became a mechanism of legal repression, as civil liberties were curbed and nationalist agitators were charged with sedition in British courts. The case of the British Raj therefore demonstrates that liberal pieties about freedom of the press were not incompatible with imperial regimes of surveillance and censorship. At the same time, anti-imperialists back in Britain were able to expose the hypocrisy of liberal imperialism for the world to see.

Darnton portrays the censors of Communist East Germany as sensitive and intelligent readers, many with advanced degrees in German literature.

The positive self-conception of censorship regimes can provide leverage for critics working both within and outside of authoritarian systems. This was particularly true during the Cold War. Darnton portrays the censors of Communist East Germany as sensitive and intelligent readers, many with advanced degrees in German literature. Rather than conceiving of their work as censorship, which was officially forbidden in the East German constitution, these censors viewed their work through the positive lens of communist “planning,” the “process by which ideas became books and books reached readers.” Many East German writers tried to work within this system, engaging in a complex series of negotiations with editors, publishers, and censors—at least until they reached a breaking point and defected to the West.

Cracks in this system began to appear early in 1989, when a high-placed censor supported the protest of the East German chapter of PEN against the imprisonment of the dissident playwright Václav Havel in Czechoslovakia. Within months, censorship activities would formally end in East Germany as the surveillance state collapsed along with the Berlin Wall. But the fall of communism raised a troubling new question for organizations like PEN: how can they remain effective in an era when repressive regimes no longer value creative expression as much as they had in the Soviet bloc, or in any of Darnton’s case studies, for that matter?

From Bourbon France to the communist Eastern bloc, the historical experience of authoritarian regimes has shaped many of our contemporary ideas about free expression and censorship, but those ideas do not map clearly onto the case of PEN and Charlie Hebdo. One of PEN’s most vocal supporters was the writer Salman Rushdie, who dispatched an incendiary tweet calling the protesting writers “pussies” and “Authors in Search of a bit of Character.” But there is a key distinction between the Charlie Hebdo attacks and the fatwa against Salman Rushdie in 1989: the Kouachi brothers acted in the name of Al-Qaeda’s branch in Yemen while the fatwa was declared by Ayatollah Khomeini, the leader of an authoritarian state that operates its own vast censorship apparatus. While PEN’s constant pressure on Iranian hardliners might help to finally bring an end to the fatwa against Rushdie some day, I doubt Al-Qaeda in Yemen can be moved by PEN protests.

In both his introduction and conclusion, Darnton makes it clear that he wants his book to be useful in the present. But because he defines censorship as a “weapon wielded by the state,” there is a limit to what kinds of contemporary problems his approach can address. For instance, Darnton provides both the Great Firewall of China and NSA surveillance as examples of new forms of state control over communication technology that demand our attention. And while he rejects the Marxist view that defines the capitalist marketplace as its own form of censorship, one need not be a Marxist to worry about the large corporations that collect our personal data and control much of how we communicate. However we define censorship, there is plenty of work left for PEN to do.

The Event of Charlie Hebdo: Imaginaries of Freedom and Control