Rising Tides, Rising Profits
In New York 2140, Kim Stanley Robinson takes on one of the almost unimaginable yet probable outcomes of climate change: that in the foreseeable future, some ... 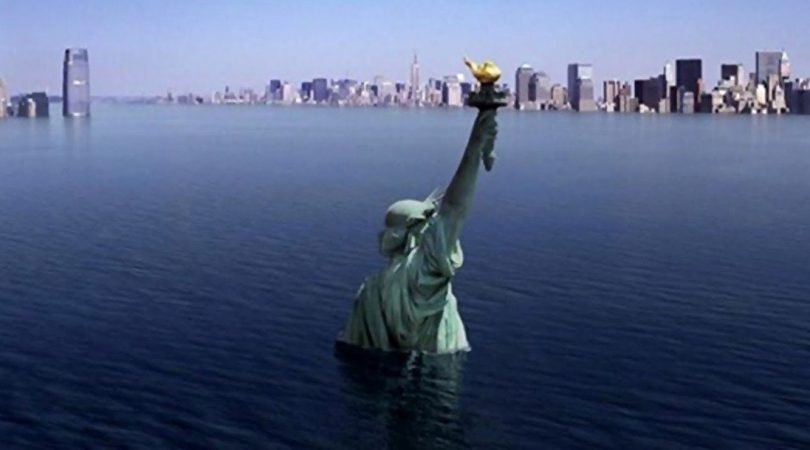 In New York 2140, Kim Stanley Robinson takes on one of the almost unimaginable yet probable outcomes of climate change: that in the foreseeable future, some of New York City will be underwater. Of course, Robinson does not adhere to the most conservative estimates of sea-level rise. But in redrawing the New York Harbor to be 50 feet above sea level, he does stay inside what he has called, in an interview with Scientific American, “the extreme edge of what’s possible” based on somewhat controversial projections of Antarctic ice melt.

From this single extrapolation Robinson derives the rest of his transformed world: 50 more feet of water means that lower Manhattan, up almost to Central Park, is either underwater or in an “intertidal zone” that is navigable by foot at some points in the day and by boat at others; that Brooklyn is submerged up to Foster Avenue; and that the South Bronx has disappeared. While canals have replaced streets in many cases (Canal Street becomes Canal Canal), and many still-wealthy Manhattanites flit around in small speedboats, others take to the air, either in steampunkesque airships or on a network of “skybridges” connecting the city’s rooftops. Still others have fled entirely; the New Yorkers who have stuck it out note with unconcealed disdain that the new economic capital of the country is not New York but Denver.

Robinson’s latest novel is remarkable in its ability to at once combine a narrative of disaster with a bold vision of possibilities. He not only reconciles the inevitabilities of climate change with the pressing need to build systems that can withstand it but also experiments with form to underscore his theoretical arguments. While the book is for the most part gripping, it can be overwhelming at times, and this is hardly mitigated by references to arcana like the Case-Shiller index (a measure of house prices). Nonetheless, the argument implicit in Robinson’s narrative and portrayal of this world is an essential one. New York 2140 exposes the violence inflicted by finance capitalism on the planet and the life that inhabits it while also showing that any meaningful response to climate change will have to combat the financialization of the economy on finance’s own terms.

Finding a way to fight such an ephemeral enemy is the daunting task of Robinson’s characters, who become wonk-revolutionaries almost accidentally. The plot centers on 10 figures, all of whom live in the Met Life building on 23rd Street (now a cooperative affectionately called “the Met”), as they half-heartedly join forces to locate two former residents known as “quants” (quantitative financial analysts), who have gone missing after an errant foray into hacktivism. This search becomes entangled with a mysterious bid to purchase the Met from its residents as well as suspicious efforts to sabotage its waterproofing that begin when they refuse to sell.

In order to resist the takeover, the residents realize, they have to go on the offensive. Nothing short of plugging the holes in capitalism itself will do. A visitor asks Charlotte Armstrong, de facto leader of the resistance, “So to save your co-op from a takeover you would destroy the entire global economic system?” Charlotte responds, succinctly, “Yes.”

To live stably in a place defined by liquid, in other words, the residents must push back against the market’s liquidation of everything it touches. Just as dry, stable streets are destabilized by tidal flooding, Robinson’s future is undone by market “liquidity,” or the ease and speed with which material goods can be turned into capital.1 This dual liquidity is at the center of the book’s narrative, an insistent slippage that leaves no doubt as to the culprit in New York’s destruction. Franklin Garr, the Met’s resident financier, repeatedly remarks that “capital [has] more liquidity than water,” and that the “liquidity” capital depends on itself relies on the “creative destruction” engendered by the floods (which is creative for speculators and destructive for everyone else).

Linking the two forms of liquidity becomes a way of representing the usually invisible violence that finance inflicts by disintegrating material into capital. As Franklin puts it: “Am I saying that the floods, the worst catastrophe in human history, equivalent or greater to the twentieth century’s wars in their devastation, were actually good for capitalism? Yes, I am.” Financiers’ reckless speculation on fossil fuels will immiserate everyone not in on the game, he tells us, and they will keep speculating just as recklessly on the ruins they leave in their wake. 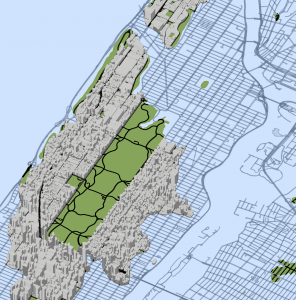 With the 50-foot sea level rise Robinson imagines, a distinct economic geography would arise: the wealthiest areas around Central Park and on the Upper West Side would survive largely intact, while East Harlem and the South Bronx would be submerged. Map by the author, generated using data from the New York State GIS Clearinghouse and QGIS

But this account suggests a far more pessimistic vision than does Robinson’s novel, taken as a whole, and it loses the sense of optimism that his idea of liquidity simultaneously—and paradoxically—contains. As the novel proceeds, we see that the two types of liquidity lead to distinct futures. The financial kind stands in for the tendency by which, under capitalism, “All that is solid melts into air” (as Robinson puts it, quoting the well-known line from The Communist Manifesto). As for the actual liquid, although it enacts violence more literally and directly than finance does, it also creates an alternative economic system based on relationships that are not so easily dematerialized as those they replace. Because “intertidal” buildings—those that sit between the points of low and high tide—are of dubious legal standing as property, the flooding of lower Manhattan has immediately turned some of the world’s most coveted real estate into a commons. This commons comes to represent the “real economy” of needs and use value that financialization works so hard—but ultimately fails—to turn into futures, and thus “air” (or in this case, liquid).

Encapsulating both the floods and the nature of finance capitalism within the term liquidity is more than just clever, and it’s more than just political. It reveals the novel’s larger strategy to represent the “slow violence” of two processes that are famously hard to make visible: financialization and climate change.2 Uniting climate change and finance makes both more perceptible, as though they were two near-transparent filters that become darker when overlaid. Bets on Franklin Garr’s Intertidal Property Pricing Index (IPPI) quantify the destruction sea-level rise could cause; at the same time, New York’s transformed economic geography, in which wealth and height above sea level correspond directly, neatly visualizes finance’s role in increasing income inequality. Similarly, the geology of New York and the history of ineffective responses to financial crises become part of the same deep history that informs the plot. Using one invisibility to underscore another is a counterintuitive but resoundingly successful approach.

If the overlapping systems of climate change and finance become starkly visible by the novel’s denouement, it is in large part because of Robinson’s formal conceit and the treatment of characters it represents. The narration alternates between 10 main characters in chapters labeled with their names, each chapter sporting a handful of epigraphs from sources as various as the IMF, Robert Moses, and Walt Whitman. This shifting perspective, taken together with the history and theory imported by the chapter epigraphs, provides different windows into the world of 2140, both in terms of the space the characters have access to and their interpretations of what they find there.

While Franklin and the missing quants let us see finance from the inside, the others anatomize the areas of its effect. Vlade, for example, speaks for the infrastructure of which he, as the Met’s super, is a guardian, while Inspector Gen plays out the implications of rapid climate change for policing and security. Amelia, meanwhile, demonstrates the effects of media and details the broader environmental ramifications of the floods on her popular online show, which documents assisted migrations conducted via airship. “The citizen” is a crass interlocutor anxious to perform the novel’s historical and ecological exposition, which he calls “info dumps (on your carpet).” Understanding the state of this world, not to mention what’s needed to change it, relies on being able to conceive of the many parts of the systems that it comprises, and such conceptions need reliable guides. 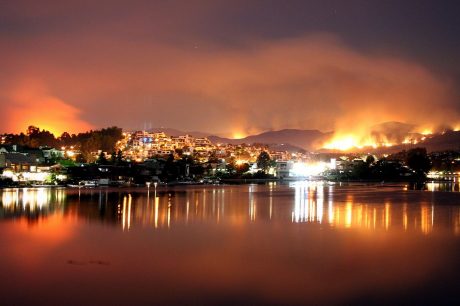 This style of characterization may at first seem familiar to readers of Robinson’s Mars Trilogy, in which people speak for the scientific or ideological positions they represent.3 But the characters of New York 2140 are more dynamic and embedded in the world they inhabit, interacting with different aspects of the social and material environment rather than enacting a set of ideological commitments. Robinson theorizes this literary strategy through the words of Mutt, a hacker-philosopher: “Have you ever noticed that our building is a kind of actor network that can do things? We got the cloud star, the lawyer, the building expert, the building itself, the police detective, the money man … add the getaway driver and it’s a fucking heist movie!” Rather than playing out arguments among various ideological positions, Robinson uses the multiple perspectives to create different vectors of action that model the interdisciplinary collaboration it would take to knowledgeably guide such a complex set of interlocking processes.

The actual working of this “actor network” is a new version of a modus operandi Robinson has mastered over years and thousands of pages: using plot as praxis for his theories—social, environmental, historical—thereby creating spectacle and utopian resolution at once. Amelia’s transportation of polar bears in an airship is thrilling, but it also asserts a theory of “rewilding” as the only possible solution to mass extinction. We are swept up in the communal fervor of a mob of disenfranchised New Yorkers marching on largely unoccupied luxury towers in Morningside Heights to demand equitable housing, but we also see the destabilizing effects environmental crisis will have on the existing social order. Robinson’s utopianism tends to sketch the route he thinks will lead there.

In 2017, as we watch environmental and financial regulations being swept away in a single anarchic gesture, Robinson’s method is more important than it has ever been. Indeed, he strikes a vital chord here in a way he may not have done since Red Mars. The relationship between finance and environmental destruction will not be news to historians of either topic, but understanding it in a way that is accessible and attends to the human realities of both requires the kind of treatment Robinson is uniquely equipped to provide. And even if we grant that a future like the one shown in New York 2140 is probably unavoidable, surviving it will require that we understand how amoral profiteering and speculation have locked us into a future of environmental crisis. It will require that we not only understand it, but resist it. 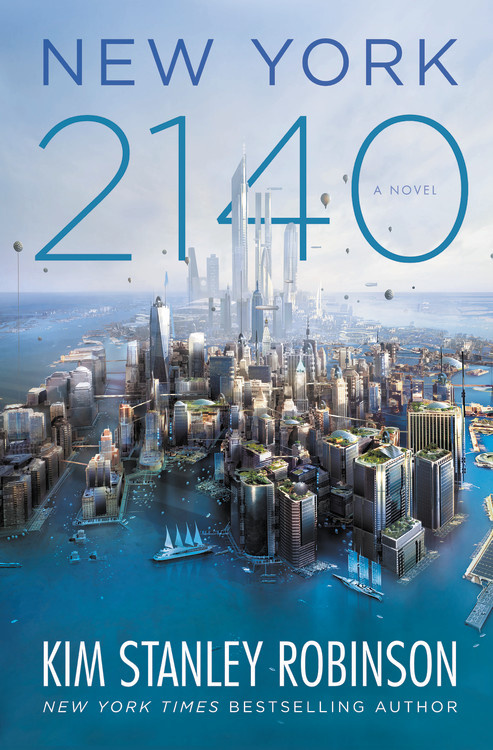