Rotten Love
In the mid-1940s Fritz Lang made two films in quick succession, both starring the same trio of actors: Edward G. Robinson, Dan Duryea, and Joan Bennett. The first of these works has the more notable ... 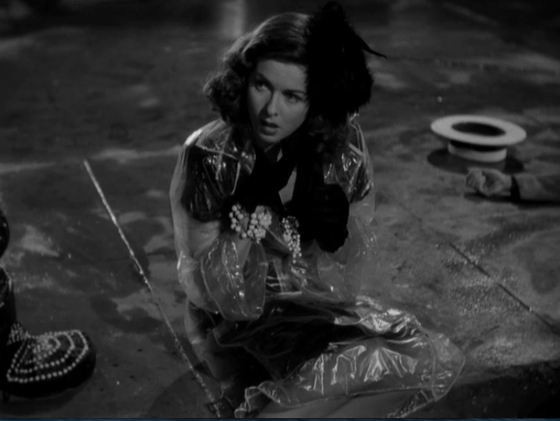 In the mid-1940s Fritz Lang made two films in quick succession, both starring the same trio of actors: Edward G. Robinson, Dan Duryea, and Joan Bennett. The first of these works has the more notable pedigree; The Woman in the Window (1944) was among the crop of Hollywood exports to France that would, along with Laura, Double Indemnity, and Murder, My Sweet, inspire the film noir designation. The second, Scarlet Street (1945), was dismissed by critics and deemed indecent by censor boards in its day. To me, though, it’s the stronger film—simultaneously more unusual and more quintessentially noir than The Woman in the Window, and a better showcase for the genius of its three stars, as well as the disturbingly potent chemistry between them.

Robinson lets all the usual toughness melt away from his toadish bearing to play Christopher Cross, a middle-aged, unhappily married cashier and amateur painter. Duryea nails what would become his signature combo of boyishness and sleaze as Johnny Prince, the small-time hustler looking for a high-stakes game. One of Universal’s postwar “B” pictures, Scarlet Street has a seedy willingness to deflate the female enigma. Playing Kitty March, a glamorous kid infatuated with Prince, Bennett shows us a side of the femme fatale we don’t usually get to see: unkempt and unruly, she reinterprets the femme’s indolent saunter as the sluggishness of bad love.

A wannabe Cezanne, Chris never could master perspective, so he has chosen the safety of a menial day job, confining his painting to Sundays in the bathroom, and his subjects to the childish emotional register of his dream life. Clearly he is not cut out for office life, where his unimaginative colleagues dread the ominous blank space of the weekend. But neither is he quite prepared for other ways of life. In an early scene he slips away from an office party into the criss-crossed confusion of Greenwich Village, the artists’ neighborhood. There he sees a beautiful young woman being beaten to the ground by her boyfriend. Chris charges the attacker with his umbrella, knocking him to the pavement. Moments later he stands gazing at the beautiful, battered Kitty, who sits in the hazy light of a street lamp checking the alignment of her jaw. To protect her boyfriend Johnny, Kitty claims he’s a stranger, and when Chris runs for a policeman, she rouses Johnny and tells him to scram. Chris returns, urging her to file a complaint. She dissuades him by asking seductively, “Won’t you take me home?”

Kitty understands that Johnny likes her when she’s flush, and beats her when she isn’t. If she has not yet dabbled in prostitution on his behalf, she has at least learned to suss out the worth of her admirers before turning them away. Starry-eyed, Chris lets Kitty believe that he’s a rich and famous artist, and on her request rents a studio where he can stash his paintings and her. Ever resourceful, Johnny tries to hawk the paintings, and soon the work catches the eye of the art critic David Janeway and the dealer Dellarowe. When they come looking for the artist, they find Kitty. Johnny, the natural pimp, slides effortlessly into the role of her agent.

A brilliantly composed shot here shows Dellarowe and Johnny talking deals in the studio while Janeway discusses process on the terrace with Kitty, finally the actress Chris believes her to be. In this moment, the conspirators Johnny and Kitty cleave along the division that defines Chris’s life: Johnny talks business, and Kitty beauty. She plays the shy artist brilliantly, mimicking, in a form tailored to her audience, the quiet expressions of passions she has heard from Chris. Her subsequent success in the art world has everything to do with this ventriloquism; Janeway is captivated because he can’t square her feminine beauty and reticence with the “masculine force” of her work (for Chris has indeed trained her to be an expressionist: “I just put a line around what I feel when I look at things” she tells Janeway in their first meeting). The woman in what she calls her Self-Portrait (in fact, rendered adoringly by Chris) ironically has the sphinx-like self-sufficiency of the classic femme fatale who acts independently of emotion (think Stanwyck in Double Indemnity). But that creature is far from the gum-chewing, “lazy-legs” Kitty, who has no control over her masochistic desire for Johnny, and who finally fails to keep either Chris’s faith or her own cool.

Such a stark rendering of female desire was rare for the period, and no doubt figured in some censors’ objections, but the more obvious objection revolved around Chris and the film’s murderous climax. After its release, the Hollywood gossip columnist Hedda Hopper wrote disapprovingly, “We shouldn’t show the young how to get away with crime.” No disrespect to Ms. Hopper, but no one gets away with anything in this film. All its characters fall prey to “the courtroom right in here,” as one journalist tells Chris, pointing to his heart. In The Woman in the Window, Robinson awakes from his nightmare; but in Scarlet Street, no one awakes. If Chris’s anguish doesn’t captivate you, Kitty’s will, because—and here’s the really striking thing about this film—unlike most of her fellow femmes fatales, she, too, lives for the wounds of love.