Saguaro Sketchbook
This is the latest installment of El Mirador, an ongoing series curated by Francisco Cantú. Spanish for “the lookout point,” El Mirador collects original nonfiction, translation, and visual art on ... 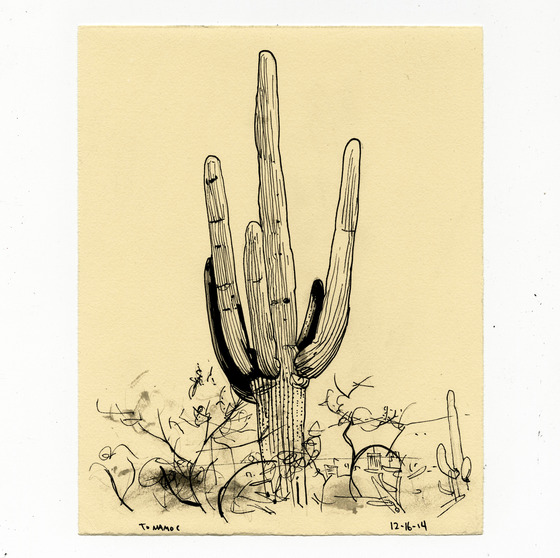 “Supreme symbol of the Southwest, the saguaro is a giant among cacti, a 20-to-50-foot-high fluted column of chlorophylled plant flesh that comes in as many different shapes and sizes as human beings do. Like planted people, no two alike, individual and idiosyncratic, each saguaro has its own form, its own character, its own personality.” Edward Abbey, Cactus Country 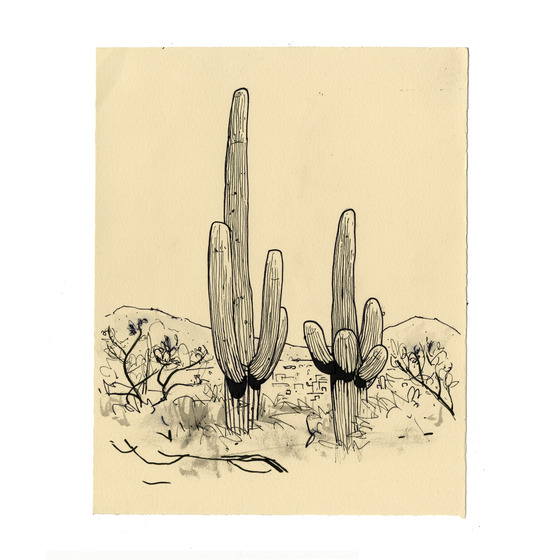 “Truly, clouds, wind, and rain are the few elements
that can touch the saguaro from head to foot.”
Ofelia Zepeda, The Place Where Clouds Are Formed 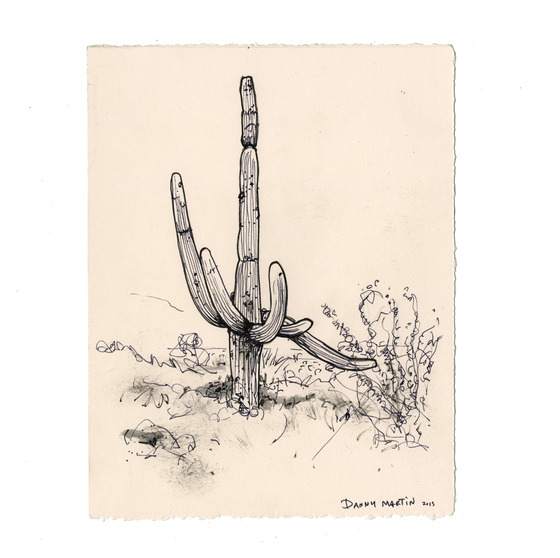 “Saguaros may begin to grow arms when the plant is between 50 and 100 years of age … A few saguaros have been observed with as many as 50 arms; many never grow arms. Saguaro arms always grow upwards. The drooping arms seen on many old saguaros is a result of wilting after frost damage. The growing tips will turn upwards in time.” Mark A. Dimmitt, A Natural History of the Sonoran Desert 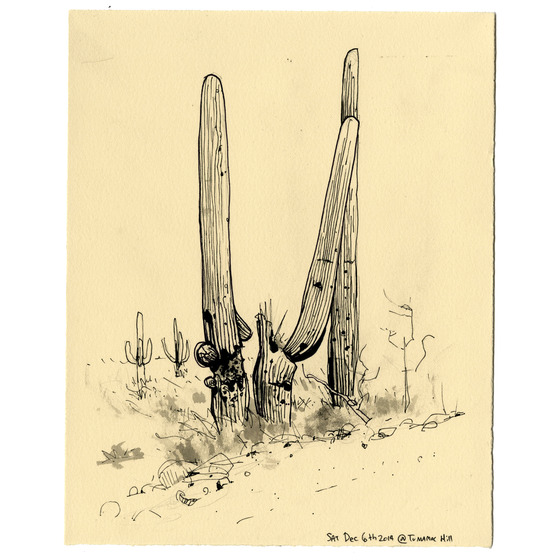 “On the mountains and the mesas the sahuaro [sic] is so common that perhaps we overlook its beauty of form; yet its lines are as sinuous as those of a Moslem [sic] minaret, its flutings as perfect as those of a Doric column. Often and often you see it standing on a ledge of some rocky peak, like the lone shaft of a ruined temple on a Greek headland.” John C. Van Dyke, The Desert (1901) 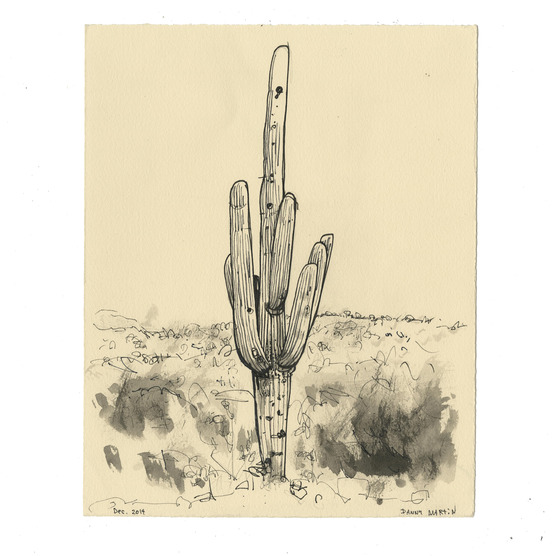 “Often a single column, the only one on a whole mountain, appears on top, resembling a sentinel on guard.” Carl Lumholtz, New Trails in Mexico (1912) 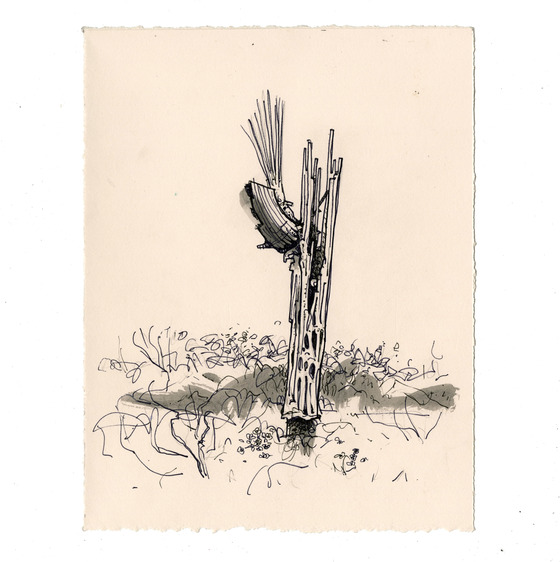 “In the high winds which in summer not infrequently sweep across the desert, as across the sea, they sway visibly, like great trees in the wind; and sometimes, because they are so shallowly rooted, they topple over to lie prostrate for years as whitening skeletons, as hard gaunt ribs from which the flesh has long since rotted away.” Joseph Wood Krutch, The Desert Year 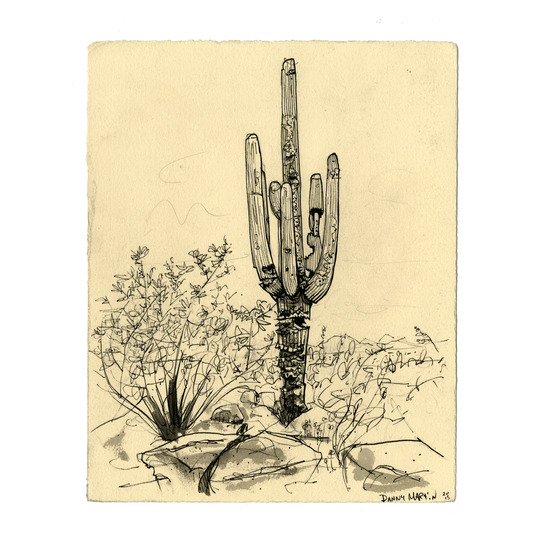 “Seedlings grow very slowly during their first few years and are extremely vulnerable … Nearly all survivors are located beneath nurse plants where they are sheltered from weather extremes and concealed from herbivore. Most desert plants—not only saguaros—must begin life under nurse plants.” Mark A. Dimmitt, A Natural History of the Sonoran Desert 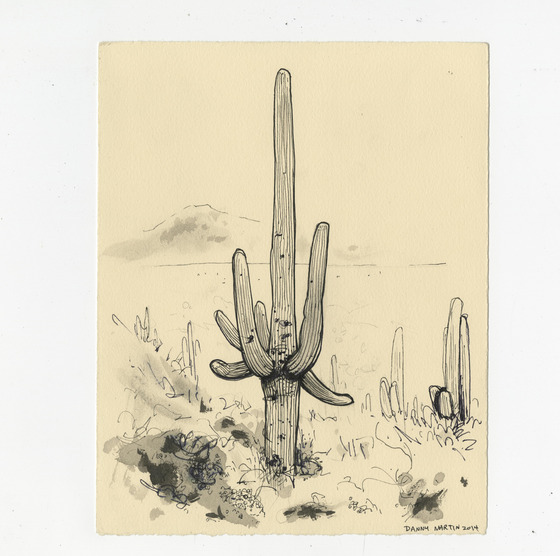 “[The arms of the saguaro] leave the parent stem at all possible angles; they twist and droop and cavort and ‘sasshay’ [sic] in all possible directions. Sometimes they almost tie themselves into bow knots. It is these bewildering variations—in the big specimens—which make them so consumedly interesting …” William T. Hornaday, Campfires on Desert and Lava (1908) 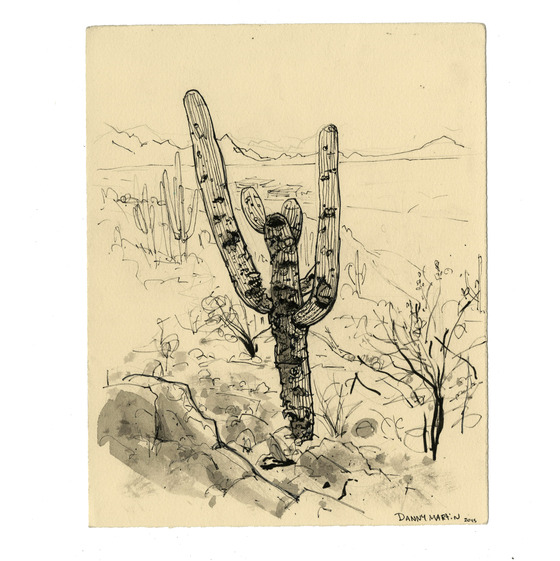 “Several times each century strong winter storms push arctic air masses deep into the Sonoran Desert. These hard freezes damage or kill the smallest and largest saguaros … Most often these freezes kill a portion of the outer layer of saguaro tissue, which forms a brown scab tissue … a significant reduction of this area results in slow starvation. A frost-damaged saguaro may survive for another decade or even longer, but eventually it weakens until it can no longer resist infection.” Mark A. Dimmitt, A Natural History of the Sonoran Desert 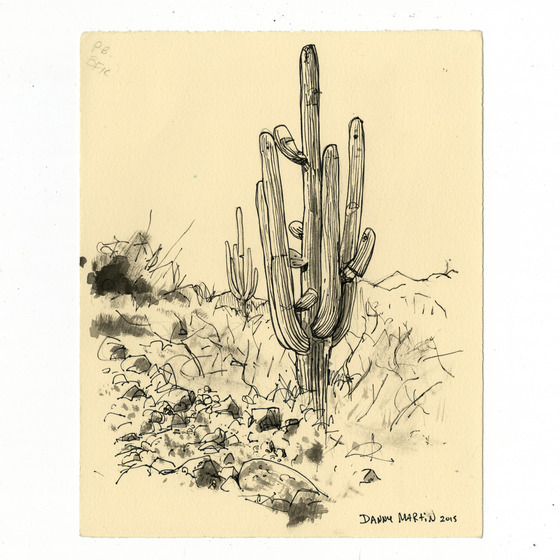 “When nobody else is around, I talk to them. On simple subjects, of course.” Edward Abbey, Cactus Country

Martin is currently developing an art book that focuses on the unique plant life of the Sonoran Desert, to be titled “Arizona Cactus.” The following selection of illustrations represent Martin’s renderings of Arizona’s most iconic cactus, the saguaro.

“My best days start with a hike up Tumamoc Hill,” Martin says. Tumamoc is a small mountain rising approximately 730 feet from the desert floor, west of downtown Tucson. Its name is an anglicized transliteration of the Tohono O’odham word cemamagĭ, meaning “horned lizard.” Since 1903 it has been the home of the Desert Botanical Laboratory, a research center now run by the University of Arizona and regarded as “the birthplace of restoration ecology.” The hill is also a favorite hiking spot for local Tucsonans of all ages and backgrounds. “The top of Tumamoc is my favorite spot in Tucson,” says Martin, “especially the view from the old observatory at the end of the trail.” Sketching the plant life along this trail is what led Martin to conceive of the idea for “Arizona Cactus.” The saguaros depicted above can all be found growing on the slopes of Tumamoc.