Security Laboratories
In recent years, feminist movements in Egypt have negotiated with gendered logics of governance oriented around the imperative to protect women from sexual harassment. Meanwhile, in Brazil, activists ... 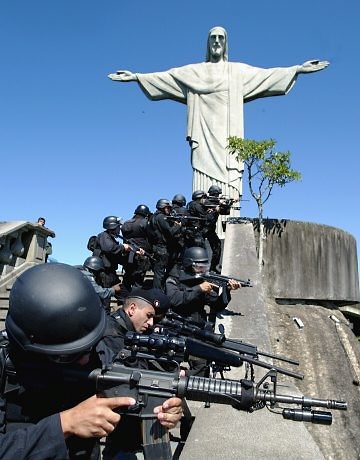 In recent years, feminist movements in Egypt have negotiated with gendered logics of governance oriented around the imperative to protect women from sexual harassment. Meanwhile, in Brazil, activists have rearticulated campaigns waged by a newly reformed police force intent on rescuing children from transnational sex trafficking networks. In his new book, the political scientist and anthropologist Paul Amar sees both events as marking a geopolitical watershed: the weakening of the hegemony of the Global North and the disintegration of neoliberal logics of governance. How to analyze this impending historical shift? Where to look for emerging alternatives? The Security Archipelago: Human-Security States, Sexuality Politics, and the End of Neoliberalism offers a set of provocative responses. First and foremost is its identification of 21st-century Cairo and Rio de Janeiro as “laboratories” for experiments in politics and governance beyond the Washington Consensus.

To understand the new cultural formations and political institutions being developed in these cities, Amar asserts that we need an analytical framework focused on the rise of human security—a governance regime that “aim[s] to protect, rescue, and secure certain idealized forms of humanity.” This new regime is gradually replacing neoliberalism, Amar contends, “as the hegemonic project of global governance and of state administration.” This shift is evident in how security is now justified and pursued by states. The antagonistic relationship between security and human rights that characterized the “neoliberal market states” of the late 20th century is no longer so evident. The repressive security strategies that underpinned earlier development paradigms have been succeeded by the “promise to reconcile human rights and national security interests” in the interest of economic prosperity. Progressive and conservative security doctrines now agree on the imperative to “humanize” (or “humanitarianize”) both state and parastatal security apparatuses. The result, Amar argues, is what he calls the “human-security state”: a globally emergent governance regime with “consistent character and political profile.” From Latin America to the Middle East, political legitimacy is increasingly based on securing humanity against a range of malicious forces.

In Amar’s rendering, this new regime is deeply moralistic in its concern for the intersection of security and sexuality. As the humanitarian imperatives of rescue and protection are more and more frequently mobilized in response to sexual oppression and manipulation, sexuality becomes an important locus for this form of governance. The case studies Amar presents focus heavily on sex workers, queer communities, sexual trafficking networks, sexual harassment disputes, and feminist movements. At times, this makes his analysis feel either too specific or too general. However, Amar’s emphasis on the security-sexuality nexus casts light on attempts by security apparatuses to define and control the boundary of the “human.” In line with global humanitarianism, human-security governance requires a population of “victims” to be protected or rescued, with or without their consent. This population is often made up of gendered and sexualized, but also racialized and class-stratified identities and bodies categorized either as threats to humanity or as a part of humanity that is itself threatened. However, in Amar’s account, human security focuses on geopolitical coordinates that differ markedly from the well-traveled imperial pathways followed by humanitarian interventions.

To chart the spread of human security, Amar develops a method that is both comparative and transnational. The Security Archipelago cites research conducted in Egypt and Brazil as well as at geopolitical conferences. Many critical security scholars decry the violence, dispossession, and control that result when forms of global governance emanating from the Global North move southward and eulogize the resistant locals and locales they encounter. Pursuing an alternative path, Amar tracks the travel of human-security practices, norms, and institutions across an “archipelago” of “hotspots,” the most significant of which are megacities, such as Cairo and Rio de Janeiro, located in the liminal geopolitical space of the semiperiphery. Echoing the fields of comparative urbanism1 and urban policy mobility,2 Amar’s case studies demonstrate how these cities served as “laboratories” or “sites of experimentation” in which “influential and globally circulating forms of humanized security governance … were tested, deployed, hybridized, and disseminated” before joining the Global North’s development and humanitarian agenda. The human-security regime, Amar writes, was “transferred to global human-development policy experts … via particular encounters and in concrete contexts,” such as United Nations summits held in Cairo and Rio de Janeiro in the early 1990s. Amar describes these events as “nodal moments in time and space, where specific Brazil- and Egypt-based human-security practices ‘jumped scale’ from the urban, Global South to the international level.”

Techniques of human-security governance forged in these settings were shaped by the political and cultural histories of the places in which they were initially tried and tested, including activists’ and social movements’ rearticulation of state security logics. The policies of human security deployed in Rio de Janeiro and Cairo also reflected the “autonomous social logics and political dynamics” of each city. However, given the archipelagic geography Amar proposes, one wonders about other “hotspots” beyond Egypt and Brazil, and whether his analysis might look different if he took some of them into account. Colombia would be an obvious case, since Medellín and Bogotá are both paradigmatic “laboratories” of urban security. There, Amar would find support for many of his theses.3 Yet contemporary logics of urban governance in Colombia suggest forms of security beyond the human or humanitarian. Consider, for example, expectations that infrastructure and architecture can address long-standing patterns of violence in the comunas of Medellín, or concerns with the serious threats posed by climate change in Bogotá: both resemble what we might call posthumanist approaches to security. Moreover, armed actors within and beyond the Colombian state repeatedly enact an antihumanist form of security, where the disposability of human life enables sovereign control over labor, territory, and resources. The latter casts doubt on the notion of the “security laboratory,” at least to the extent that it is based on the benign technocratic dream of expert knowledge applied for the greater human good.

If the megacities of the Global South are indeed “laboratories” in which new logics and techniques of global governance are being created, it is up to other researchers to fill out and develop further Amar’s concept of the “security archipelago.” Though his study provides both the theoretical rationale and the analytical tools with which to do so, it may be worth questioning whether the “human” is necessarily central to emerging security regimes. For along with human security apparatuses and the human actors struggling to articulate progressive alternatives, a host of non-humans—drones, border fences, hurricanes—are actively producing the security landscape of the future.

The Security Archipelago: Human-Security States, Sexuality Poltics, and the End of Neoliberalism