Sentient Instruments
Things had been tough since Dee got back from Iraq. She and her husband were sleeping on opposite sides of the bed. “I’m sorry you’re not getting laid,” she snapped at him, “but I’m still seeing my ... 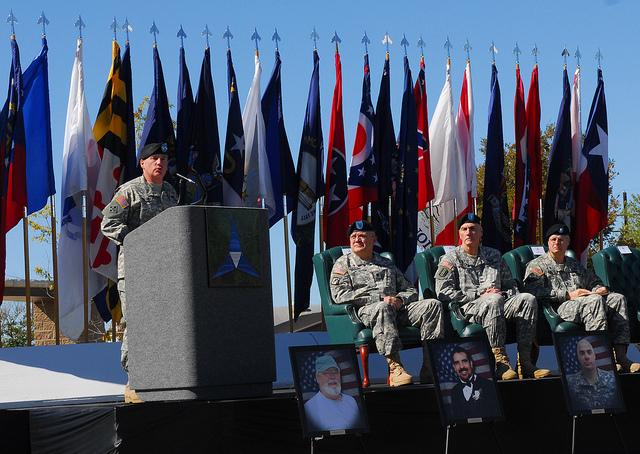 Things had been tough since Dee got back from Iraq. She and her husband were sleeping on opposite sides of the bed. “I’m sorry you’re not getting laid,” she snapped at him, “but I’m still seeing my buddies get killed in my head!” One night, they sat down to watch Transformers with their three-year-old daughter. As a towering robot laid waste to a desert outpost in the opening scene, Dee’s heart started to race and sweat ran down her back. She went into the kitchen and sat on the floor with her head between her knees. When she looked up, her daughter was standing there, holding out a comforting glass of apple juice.

It’s the accretion of everyday stories like this one that gives Kenneth MacLeish’s Making War at Fort Hood its power. Based on a year of fieldwork in Killeen, Texas—home to one of the largest Army bases on American soil—the book offers neither a celebration nor an indictment of the soldiers MacLeish comes to know. Rather, the book piles up the particulars of living in an endless holding pattern of deployment and homecoming. The effect is something like a bird’s nest of found objects, patiently assembled and uncanny in their interrelation. For MacLeish, what stitches them together is violence, which turns back on those whom the state charges with executing it. The soldier may act as a “petty sovereign” as he decides who lives and who dies during the heat of battle. But, paradoxically, this decision becomes the only one he can make, as the rest of his life gets structured by powerful, if never all-consuming, forces of compulsion and control.

What caused Dee’s helpless reaction to the first minutes of the film? A clinician might size up her symptoms and call them PTSD. MacLeish is careful not to discount the practical value of diagnosis for some soldiers, but he mostly avoids the language of trauma and its implicit focus on a single, scarring event. Instead, Making War at Fort Hood develops the complementary notion of vulnerability, which MacLeish defines as “the condition of existing for long periods of time and in various modes of exposure in harm’s way.” For him, it’s the body that is the site of compulsion, the body that progressively registers the experience of war and allows that experience to be reactivated unpredictably. MacLeish’s prose is arresting as he describes “the rasping heat of the strapped, swaddled, and loaded body’s own mechanical action on itself, in the armpits, between the toes …” At other points, though, the book becomes mired in the cryptoscience of modern affect theory, in which sensory impressions trigger precognitive bodily responses. According to this view, the choosing subject is at the mercy of the autonomic nervous system.1

For MacLeish, though, there’s a difference between a response that’s involuntary and one that’s automatic, between a body that’s disciplined and one that’s an “unsentient instrument.” Making War at Fort Hood charts the different forms that compulsion can take, whether it’s orders passed down the chain of command or sent up from a soldier’s heaving stomach when she pries open the Humvee and what’s left of the driver is “spaghetti.” Yet the book is just as interested in what escapes compulsion, what’s left over, and how even these unruly remainders are often pulled into the orbit of military life. A chapter on love lays this point bare. At first, it reads like a breezy riff on the different forms of attachment that soldiers sustain: love for one’s unit, love for one’s family back home, friendships that teeter on the brink of something else. But MacLeish’s argument is a deceptively complex one: these bonds, even as they feel like a private refuge from the demands of duty, become intertwined with those very demands and lend them their intensity.

The gift of a soldier’s service is defined by its pricelessness; there is nothing that a civilian can do or say to balance the ledger.

A new book by journalist David Finkel takes its title from what has become a platitude addressed to returning soldiers: thank you for your service.2 While Finkel uses the phrase ironically to comment on the inadequacy of America’s response to veterans’ mental health issues, the final chapter of Making War at Fort Hood offers a sustained and brilliant meditation on this debt of gratitude and the impossibility of discharging it. MacLeish argues that the gift of a soldier’s service is defined by its pricelessness; there is nothing that a civilian can do or say to balance the ledger. Yet, he insists, it is just as impossible to refuse this debt, which he sees as a form of social compulsion incurred simply by the fact of being born a citizen. A plumber MacLeish meets in Killeen tries to dodge it, distancing himself from the greedy developers putting up housing around the base. “Weren’t we all here because of war,” MacLeish responds, “one way or the other? Was there even any question of turning down blood money or not ending up with some of it in your pocket?”

Complicities, MacLeish’s and ours, pervade the pages of Making War at Fort Hood, troubling any tidy distinction between those who perpetrate violence and those in whose name it is carried out. This approach may not give enough credit to pacifists and others who work for demilitarization, and in describing combatants as mere “relays” of state power it risks exempting them from individual accountability. Still, the stories we are told about soldiers too often caricature them as either selfless heroes or pitiable dupes. MacLeish offers us something richer: a sensitively rendered portrait of social actors who both do and do not get to choose their course, who force us to rethink basic notions of agency and autonomy from the vantage point of violence as a way of life.

Making War At Fort Hood: Life and Uncertainty in a Military Community