Shangri-La in the Mud: Vancouver’s Squatters
If you wandered downtown Vancouver during the 2010 Olympics, perhaps you were struck by an incongruous architectural juxtaposition ... 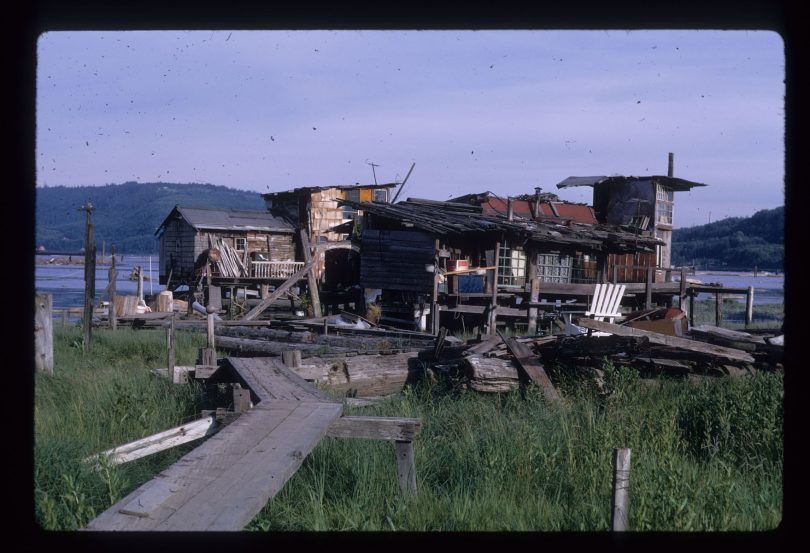 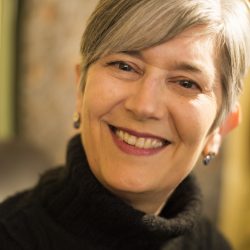 If you wandered downtown Vancouver during the 2010 Olympics, perhaps you were struck by an incongruous architectural juxtaposition. You were walking along Georgia Street, say, where you could see neither the iconic mountains nor the glittering waterfront that the city is so famous for. You were at the bottom of a canyon of glass and steel, everything shadowed in blue-grey—the incessant passing traffic, the concrete storefronts, the tinted plate glass of the high-rises on all sides. But suddenly you came upon three makeshift shacks, thrown together with bits and bobs of scavenged scrap wood, perched on pilings over a pool of reflective water. At first it seemed that their diminutive size was an effect of the towering skyscrapers, but on closer inspection, you saw that they were not life-sized, but scale models.

This was Ken Lum’s tribute to Vancouver’s waterfront squatter history, a tart reminder of the Vancouver that could have been, but never was. Lum titled it from shangri-la to shangri-la, because the ephemeral shacks sat in 2010 at the foot of Vancouver’s (then) tallest building, the Shangri-la Hotel, stressing the “acute contrast between the rustic character of the shacks and the rigorously engineered mass of the nearby towers.”1 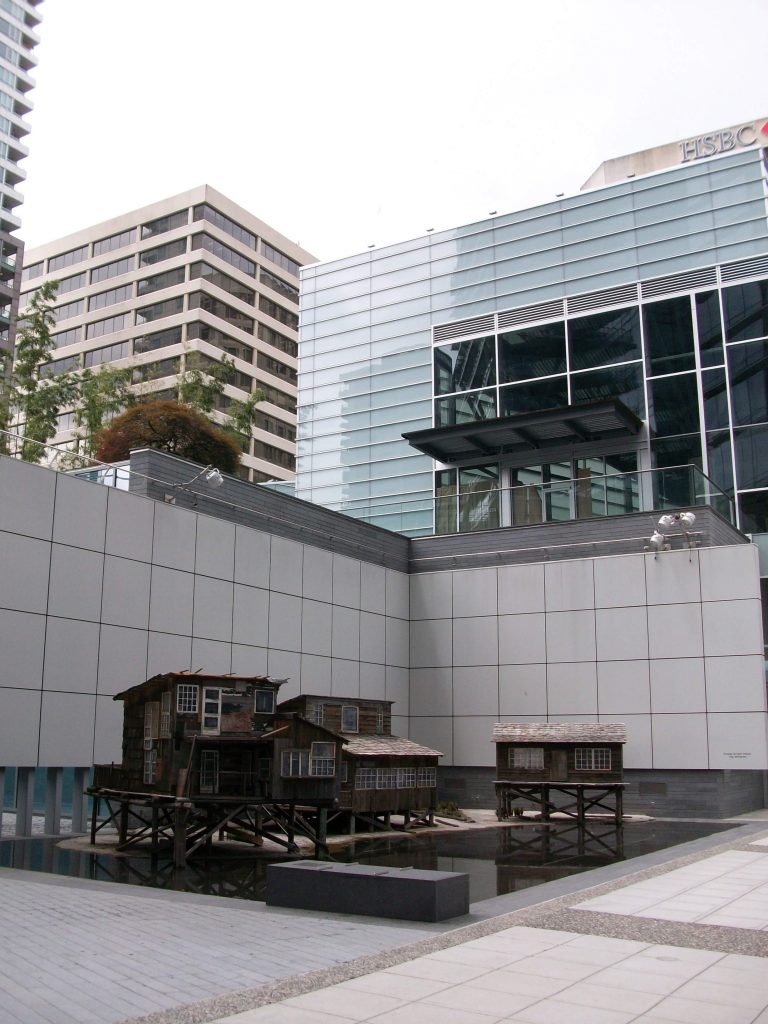 The observer was confronted, then, by the contradiction between two senses of “Shangri-la,” originally coined by the novelist James Hilton to refer to his Orientalist vision of a hidden, enchanted utopia. The hotel itself represents the kind of sumptuous living conditions affordable only to abundant capital, international mobility, and zoning and tax laws that favor corporate development. But the replica squatters’ shacks point “back in time” to another ethic of living altogether, one made possible by the renunciation of material abundance in favor of an almost ascetic closeness to nature.

Lum’s installation alluded to a long history of settlement on Canada’s western outpost, to conflict about land use, to displacement of the Coast Salish and other indigenous inhabitants, to successive skirmishes about who owns what territory, and to the dubious difference between a titleholder and a squatter, an imperialist and a pioneer. The model shacks were based on real structures that had once occupied Vancouver’s North Shore, perched along an ambiguous strip of not-quite-land, not-quite-water between Burrard Inlet and the forested mountains. 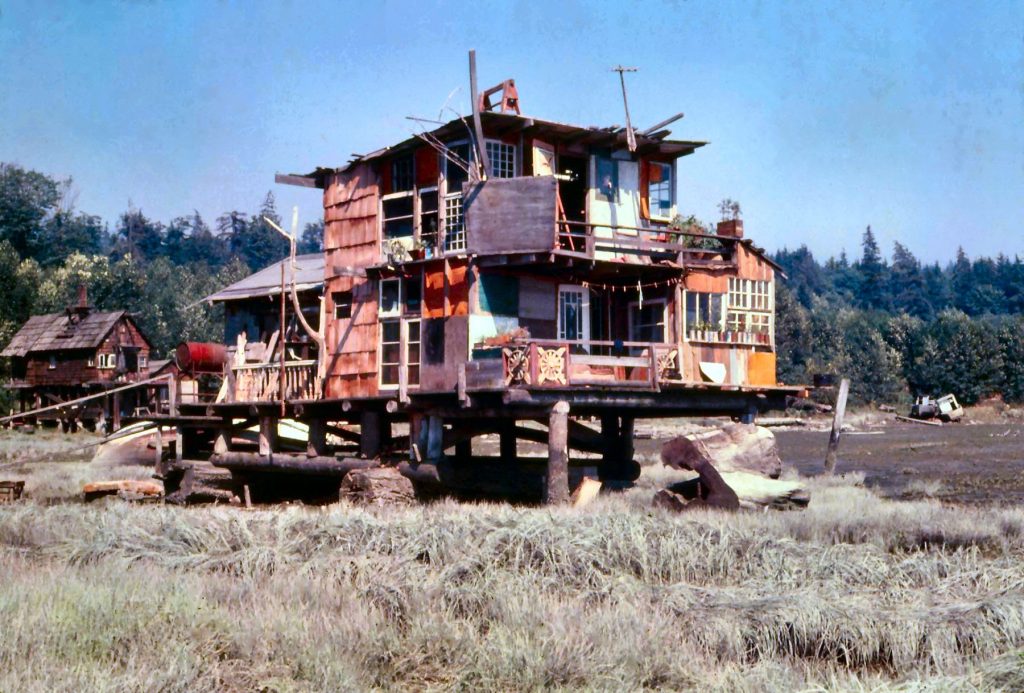 “These shacks just went up, wherever they seemed to want to take root.” Paul and Linda Spong’s House. Photograph courtesy of David Wisdom

One of Lum’s replicas was inspired by Malcolm Lowry’s shack, where he lived as a squatter on the North Shore during the ’40s and ’50s, and where he completed Under the Volcano, the novel that was to immortalize him. By the late 1960s, long after his death, Lowry was as famous among Vancouverites for his squatter’s life as for his literary legacy, and had inspired a whole new generation of squatters on what were known as North Vancouver District’s Maplewood Mudflats. There hippies, artisans, and other countercultural types had drifted in to take residence along the tidal flats in improvised wooden structures, most of them raised up on posts to allow the salt tides to rise and fall beneath. Lum’s other two models were based on the ’70s squatter cabins of whale researcher Paul Spong and artist Tom Burrows, who had lived on the flats with their families during the heyday of the squatter community.

In both Lowry’s era and in the next generation, Vancouver was engaged in waves of urban development meant to clean up the city’s raggedy edges, to transform the skyline into the sleek cluster of glass skyscrapers it has become today. This entailed bulldozing much of the existing housing stock to make way for progress, and laying out a concrete grid of curbs and sidewalks to form an impermeable surface between the metropolis and the porous ground it sat upon. It also meant ensuring that only the wealthy could afford to live there. The squatters’ settlements along the city’s shores posed, and continue to pose, challenges to Vancouver’s wholehearted embrace of urban development. 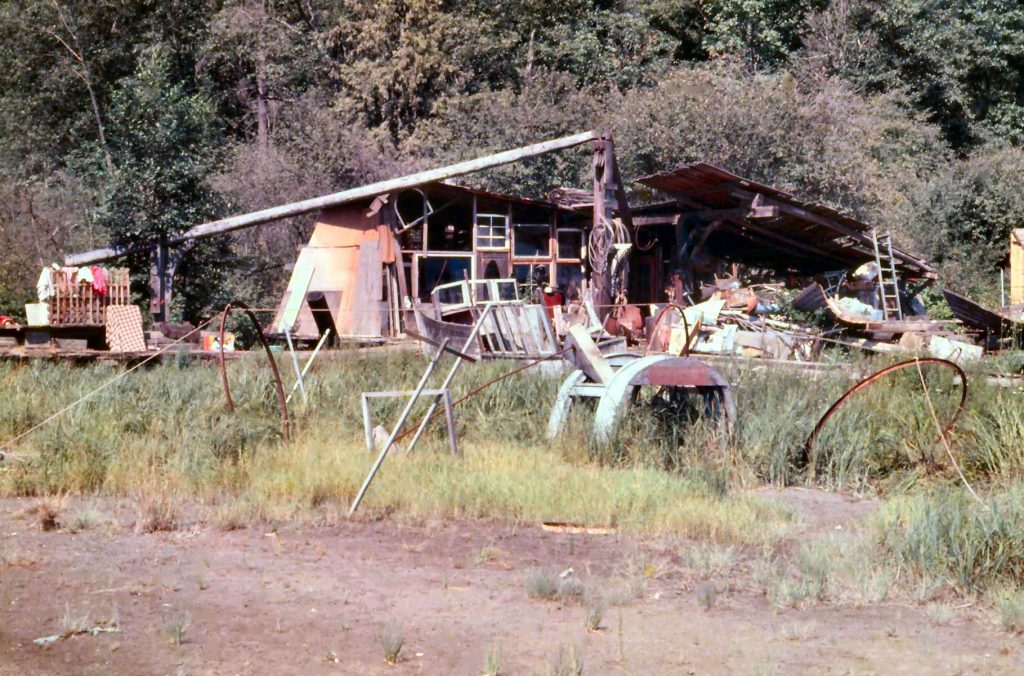 “You could simply fabricate a shelter out of the odds and ends that came to hand.” Squatter Willie Wilson’s house, with Burrows’ sculptures in foreground. Photograph courtesy of David Wisdom

In the city’s neighborhoods, for instance, the gridded streets came first, along with the infrastructure; each house built on the lot accorded to it, in the most profitable manner for developers. But on the Maplewood Mudflats, the squatters’ shacks seemed to materialize of their own accord, some of them originally float houses, enlarged and embellished by what washed up at high tide; others small post-and-beam structures coming up from a scavenged platform on floats; one a “whorehouse” that had drifted over, or been towed (there were contradictory accounts), from elsewhere. To visit your neighbors, you either walked across the grassy flats at low tide or, when the water was up, paddled a kayak or rowboat, or poled yourself astride a log.

The aesthetic design of the shacks themselves was based on the principle of suspension. They hovered above the always-shifting waters of the tidal flats on pilings, or on log platforms rising and falling with the water level. An ethos of accommodation to the fluctuating line between dry and wet prevailed: no dams, no dykes, no culverts, no concrete intervention at all in the natural patterns of the mixing of water and earth at this liminal place. The epitome of “The Establishment” is cement hardened into rigid, inhospitable forms. But though mud might dry, this place was suspended afresh each day as the tides washed in, bringing new life for the birds to feed on, and flotsam to be gathered by human gleaners on the beach. 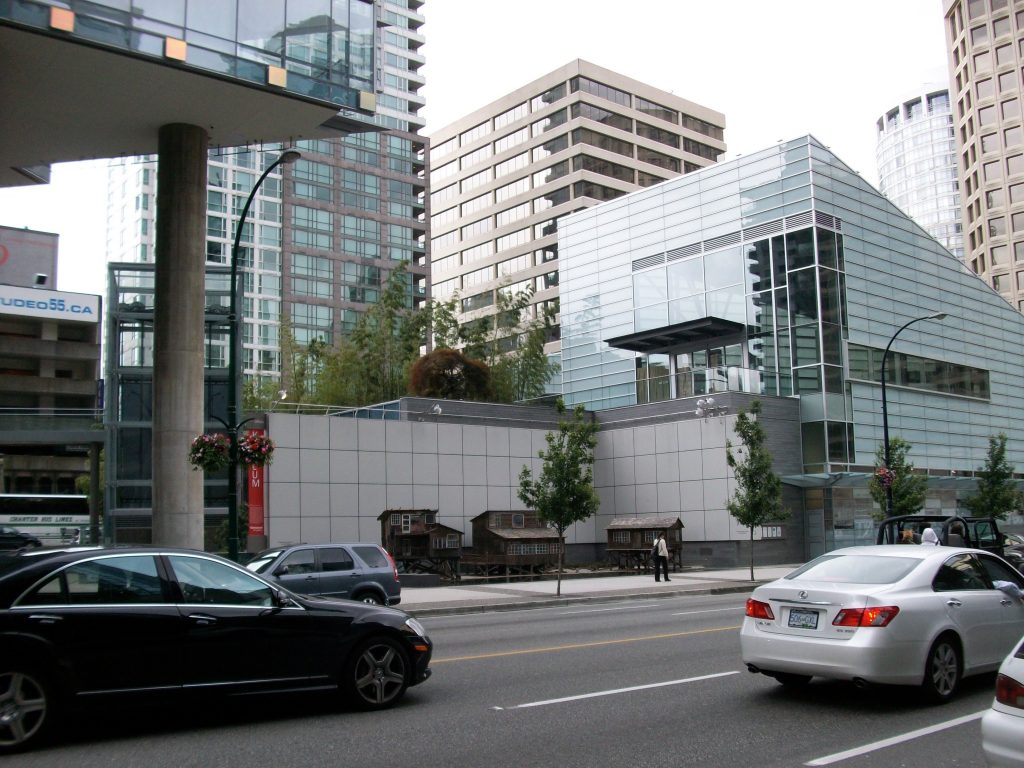 By squatting here, the residents hoped to forestall civic plans to build a marina, a shopping mall, a city center on the waterfront. In this way, too, their shacks represented the suspension of urbanized progress: they consisted of driftwood (much of it fugitive detritus from British Columbia’s timber industry) or of the demolition refuse from Vancouver’s urban renewal schemes. Lowry had lamented in one of his stories about the city: “The shingled houses were falling like ninepins, each day cupolas tumbled off the poor old steamboat Gothic buildings being torn down, like the trees, to make way for more soulless Behemoths in the shape of hideous new apartment buildings, yet more deathscapes of the future.”2

Two documentaries were made about the Maplewood Mudflats squatters,3 lyrical records of their final days on Vancouver’s North Shore, which include bittersweet footage of their drawn-out battles with city authorities before their makeshift houses were bulldozed or burned down in 1971. 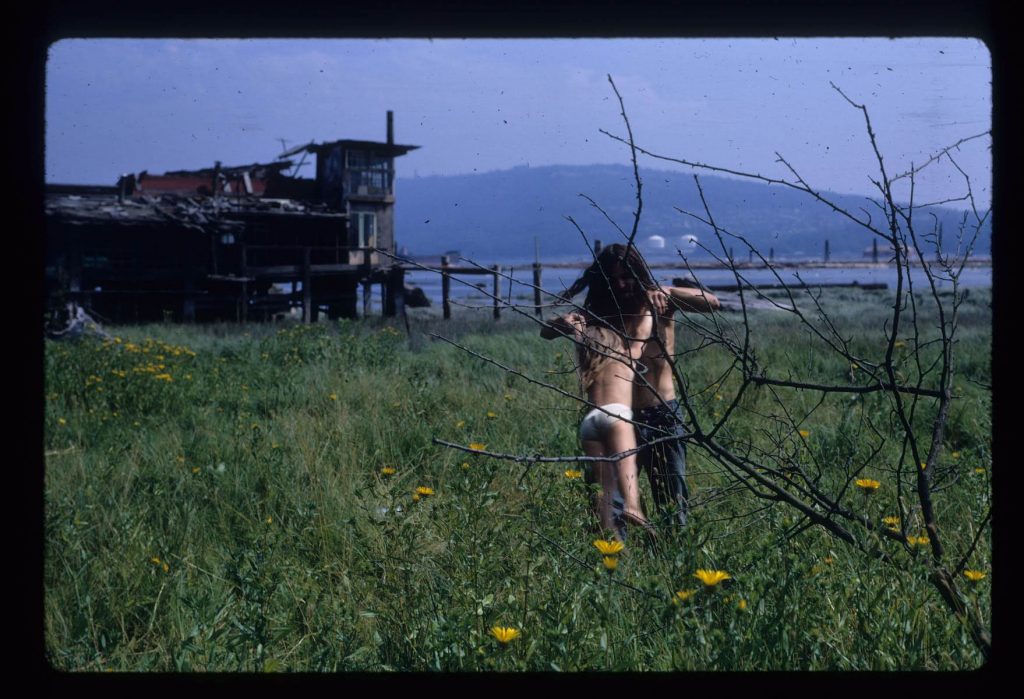 Freewheeling squatters on the tidal flats, industry visible across Burrard Inlet. Photograph courtesy of Sean Malone, director of Livin’ on the Mud (1972)

A melancholy pervades these films, but what was the lost object of desire? Was it the fantasy, so nurtured in the late ’60s and ’70s, that one could perch on the edge of the city and enjoy its cultural delights without being weighed down by the tedious need to contribute to its infrastructure? Or was it the dream of living with immediate access to the natural world (the estuarial setting, the mountains looming behind, the salt tides into which Lowry dove with glee each day, right off his dock)? Maybe it was the desire to practice self-sufficiency by fabricating a shelter out of the odds and ends that came to hand, either from what the tides brought you, or from the houses that developers were destroying as they modernized the cityscape.

We couldn’t own our shack, Lowry wrote about his squatting days, “and if it ever got so we could, we wouldn’t want it, it would be so different … part of what’s so wonderful there is that it isn’t properly speaking anywhere at all, it’s like living right out of the world altogether.”4

Long after their disappearance from the North Shore, the Maplewood Mudflats squatters survived in the minds of Vancouverites: through repeated screenings of the films that had immortalized them, through presentations in the city’s arts communities, or among its ecology promoters, or in commemorative articles in the local news media. The afterimage of the shacks on the mudflats was retained on the city’s collective retina to bolster Vancouver’s sense of itself as a final frontier, even after its frontier days were long gone.

Lum’s model shacks disappeared from Vancouver’s downtown artist site soon after the Olympics. But more recently they have come back to haunt the North Shore. Looking over a protective fence, you can see them reflected like ghosts in a pool of water among the trees. As it turns out, even though the ’70s squatters were forced out of their shacks long ago, they won, in a way, a small battle against progress. The Maplewood Mudflats was never cemented over by civic improvement; instead, it is now the Maplewood Conservation Area, a haven for birds and wandering birdwatchers alike. The model shacks have been permanently installed there, across the parking lot from the Corrigan Nature House. And the neighboring Tsleil-Waututh, on whose unceded territory the Conservation Area resides, are collaborating with settler authorities to restore the estuary to its predevelopment condition. 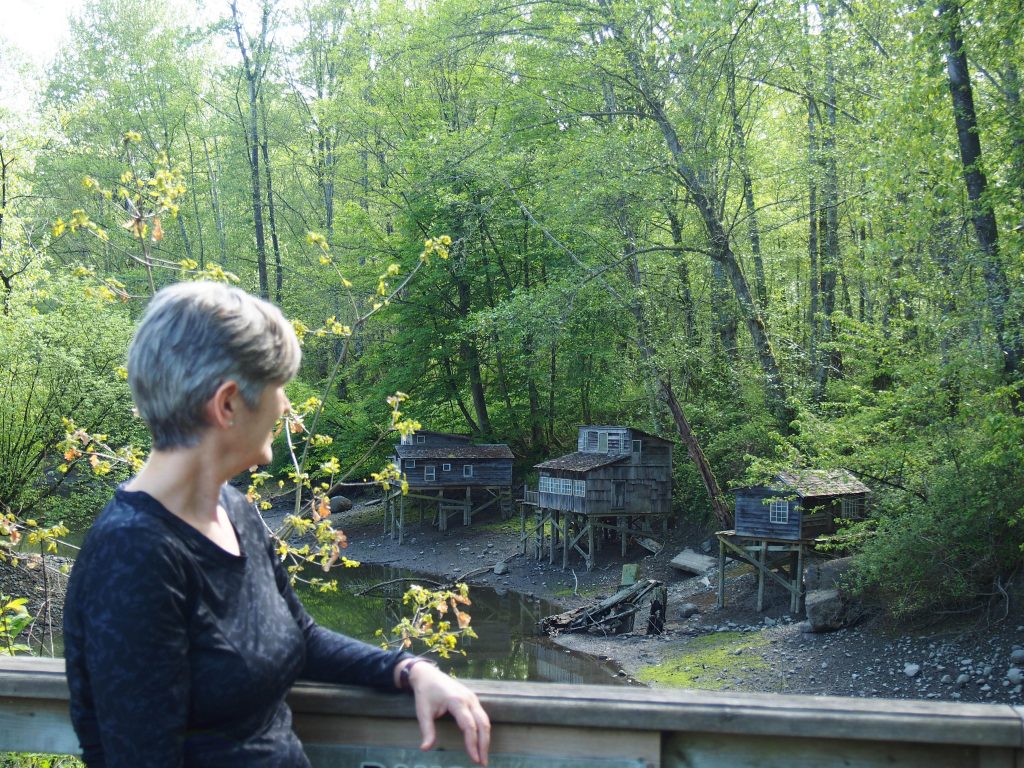 I can’t decide whether it is supremely appropriate or deeply ironic that the final venue for Lum’s shacks turned out to be the Maplewood Mudflats. It doesn’t seem to trouble anyone that his title referencing the contrast of luxury high-rise to lowly shack, from shangri-la to shangri-la, will no longer make sense, now that the replicas have been removed from their proximity to the towering hotel. But one thing’s for sure: while squatting is no more tolerated on the North Shore now than it was in earlier decades, the simulation of squatting makes for good art. Lum calls his replica shacks “a kind of vestigial memory, traces from a foreclosed moment in the lower mainland’s history.”5

They are a vestigial memory, indeed, of the waves of human habitation that lap, for better or worse, the shoreline of any coastal settlement, and particularly one like Vancouver’s, where centuries of indigenous accommodation to periodic inundation has been covered over with the rigid crust of progress.6