“Sharing” the Israeli Occupation
In April of 2014, an Israeli combat soldier from the Nahal Brigade named David Adamov was captured on camera violently threatening a Palestinian teenager in Hebron. After a video of the event posted ... 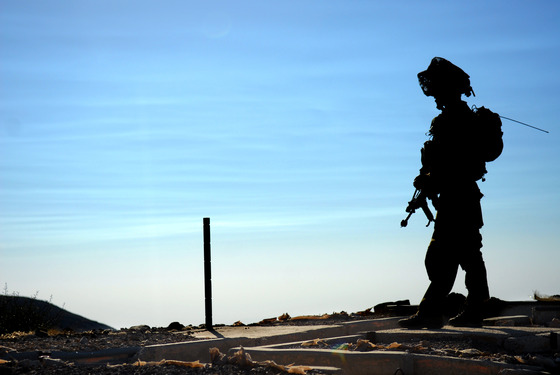 In April of 2014, an Israeli combat soldier from the Nahal Brigade named David Adamov was captured on camera violently threatening a Palestinian teenager in Hebron. After a video of the event posted on YouTube went viral, Adamov was suspended by the military. His suspension instigated a social media protest, with soldiers from his unit and across other brigades posting selfies with signs that read “We are all David the Nahalite.” A Facebook group by the same name, filled with photos, memes, and messages of support from Israeli soldiers and civilians, chalked up over 20,000 “likes” in a few hours.

It is this viral event that illustrates a turning point in what Adi Kuntsman and Rebecca Stein term “Digital Militarism,” a process whereby online communication platforms become tools that sustain state violence and remake it as everyday digital activity. According to these authors, among Jewish Israelis increasing digital literacy is deeply entangled with growing militarism and more fervent denials of the reality of Israeli occupation of Palestinian territories. Kuntsman and Stein argue that for years the military occupation was Israel’s “public secret,” something known to all but seldom acknowledged. Then, between 2008 and 2014, the period in which digital militarism was consolidated in Israel, the violence of occupation was brought to the fore. The online protest in support of Adamov is a case in point. Rather than distancing themselves from the violence or regarding it as an aberration, many Israelis proudly stood by the perpetrator.

Israelis’ increasingly unapologetic response to such exhibitions of aggression is explained in part by the events’ normalization. The authors hold that initially digital militarism was harnessed to support the project of public secrecy, by framing the displays of violence as exceptional. But by enabling images of Israeli soldiering to circulate with increasing ease, technological developments made secrets more difficult to keep. The spectacle of the occupation was brought into Israelis’ intimate spaces and incorporated into their routine online activity, facilitating a shift in their investment in public secrecy. This everyday coverage of occupation soon rendered it banal, and Israeli social media users now openly align themselves with the violence their military inflicts. The authors thus argue that the occupation was made both more visible and more invisible by digital militarism.

Tracing the evolution of social media in Israel from the early 2000s to the present, Kuntsman and Stein effectively expose the workings of the country’s military regime and militarized culture through the most ordinary of digital acts. But while Digital Militarism makes a cogent argument for Israelis’ complicity in state violence, it perhaps insufficiently considers the coercive nature of the military. The fact that military service is mandatory warrants a reflection on soldiers’ double conscription—to serve and also to justify that service to themselves and to the world. Social media can thus be considered yet another sphere in which soldiers are required to work for the state. In this vein, it would be interesting to think through Israel’s digital militarism alongside some of the contemporary analysis that reframes online participation as a form of digital labor. An analysis of digital participation and military service as entangled forms of labor may further illuminate how the occupation is both discursively and materially sustained. For as the authors point out, what the social media sphere enables is a demand on soldiers to participate in Israeli PR in real time, and to put their personal use of social media toward state ends.

This is most clearly illustrated by the events of the summer of 2014. In July Israel launched “Operation Protective Edge” in the Gaza Strip, unleashing what was arguably the most devastating attack its residents had ever experienced. As the military dropped thousands of bombs, the social media sphere buzzed with calls for aggression. Selfies of Israelis holding signs with “Death to the Arabs” were posted online and a Facebook group named “The People of Israel Demand Revenge” grew to 35,000 members in its first 48 hours. These violent displays online were covered by both Israeli and international media, where they were portrayed as a spontaneous response to the kidnapping and killing of three Israeli teens in the West Bank two weeks prior.1

Social media can be considered yet another sphere in which soldiers are required to work for the state.

The independent nature of this online activity should be questioned, however. Just days after the kidnapping, a nationwide campaign entitled “Bring Back Our Boys” was launched by graduates of the University of Haifa’s Ambassadors Online program and joined by over ten governmental and private organizations. It was later endorsed by the Israeli military spokesperson, who asked Israelis to retweet its messages using the campaign hashtag. And indeed, the call for public participation was successful. #BringBackOurBoys went viral, receiving up to 2,800 tweets per hour and garnering thousands of pictures and messages of support.

Following their insightful analysis of the workings of Israeli militarism and occupation through digital media, the authors offer a hopeful reflection. They observe that digital objects can have long afterlives, beyond the intention or control of their creators. The digital archive’s past and present, then, are “always enfolded within dormant digital futures.” This futurity of the digital archive is where its potential lies. It might serve as a counterweight to Israeli attempts at forgetting and erasure, and in this way engender Israeli accountability. And it may, in the process, make possible the imagining of more just political alternatives. Given the echo chamber for egregious calls to violence that the Israeli social media space has become, it is sometimes difficult to imagine Israelis shocking themselves out of their complacency. But I too hope that what the digital world lays bare will induce more Israelis to resist their recruitment, both physical and digital, into the Israeli war machine.

Featured image: An Israeli soldier guards his base during sunset (2008). Photograph by Israel Defense Forces / Flickr