Skateboarding, We Hardly Knew You
Since its beginnings, skateboarding has always been multicultural—and always provided ways to resist rigid US norms and borders. 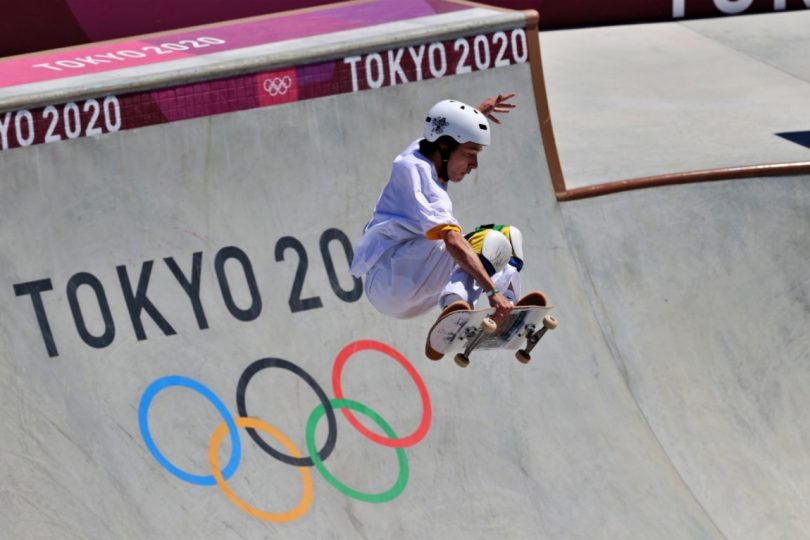 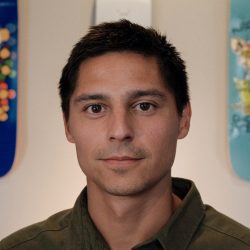 With the world watching, Japanese and Brazilian skaters stood atop skateboarding’s first ever Olympic podiums. The United States—the unofficial capital of skateboarding—took home two bronze medals. In many ways, the Olympics provides an important takeaway for skaters and nonskaters alike: at its best, skateboarding is a transnational culture.

The historic occasion is one of many recent “firsts” that demonstrate skateboarding’s international profile. In 2015, for instance, three skateboarders helped hoist the Cuban flag in the John F. Kennedy Center in Washington, DC, inducting Cuba into the Hall of Nations. The diplomatic gesture itself was perhaps predictable, considering the Obama administration’s highly publicized efforts to normalize US-Cuba relations. More surprising is that the historic occasion materialized through the hands of one Black and two Cuban American skaters wearing T-shirts, worn-out jeans, and battered sneakers.

The Kennedy Center event was organized in partnership with Cuba Skate, one of many international skateboarding NGOs that have emerged in the past two decades. With the clout provided by the Olympics, skateboarding will continue to push its way into the everyday lives of people around the world.

How have we reached this point, where a criminalized subculture has turned into a global sport? And what does skateboarding’s future hold?

To answer these questions, it’s worth looking back at skateboarding’s origins, and how the sport has been woven into the physical and social fabric of US society. Most visibly, skateboarding is reshaping the way we build our cities. This influence on urban development and design is happening across the Western world, with cities like Malmö, Sweden, erecting skateable public sculptures. Even so, its origins are rooted in California’s multicultural skateboarding community. 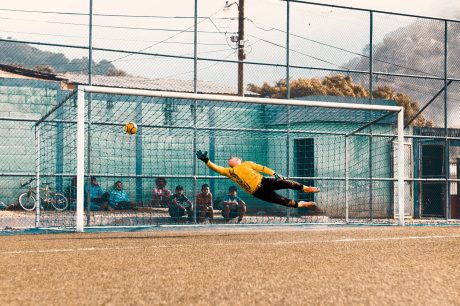 Skateboarding’s conventional origin story recounts how California surfers in the 1950s tore the handles off of their scooters and rode hands-free across inclined surfaces to re-create the experience of surfing ocean waves. However real or imagined, this narrative has withstood the test of time, as California remains “a putative homeland to skateboarding.”1 The state’s dry climate, abundance of midsize and large cities, and economic hold on the skateboard industry continue to attract skaters from around the world, including Olympic medalists Yuto Horigome of Japan, Kelvin Hoefler of Brazil, Keegan Palmer of Australia, and Sky Brown of Great Britain.

Since the 1950s, skateboarding has gone through several boom-and-bust cycles. The second, and perhaps most important, boom came by way of the Zephyr skate team in the 1970s. The team consisted of a young group of surfers-turned-skaters from a working-class section of Venice Beach and Santa Monica known as Dogtown. While many of the early Zephyr riders were bleached-blond white boys—what became the stereotypical image of skateboarding—early members of the Zephyr team included skaters of color like Tony Alva, Shogo Kubo, Peggy Oki, and Marty Grimes.

These skaters weren’t merely present at the birth of modern skateboarding. In fact, they pioneered much of what skateboarding is today, from its physical look to its vertical maneuvers. Moreover, their embrace of local Latino gang aesthetics—flannel shirts, graffiti, and bandannas—reflected Dogtown’s multicultural and economic reality.

With the traction provided by a newly developed polyurethane-based skateboard wheel, the Zephyr skate team reached new heights—literally. Its riders applied a unique free-form surf style to various embankments and vertical transitions across Los Angeles, including drainage ditches and dried-out backyard pools. Public and private property lines mattered little. In many ways, this was the beginning of skateboarders using the built environment as their playground.

Performing at local contests and receiving coverage in skateboard magazines, the team eventually drew wider attention, exposing Dogtown’s distinct skateboard subculture to curious onlookers and financial investors. By the mid-1970s, numerous privately owned concrete skateparks quickly opened around the United States. However, poor construction, mismanagement, and soaring injury-insurance premiums at these parks, combined with plummeting board sales, precipitated their demise. The business world treated skateboarding as a cash-cow fad, seizing upon the broad cultural appeal of Southern California surf and skate culture, only to abandon it once profit margins declined. By the early 1980s, dedicated skateboard magazines—including a young Thrasher Magazine—were struggling to fight off claims that “skateboarding is dead.”

How have we reached this point, where a criminalized subculture has turned into a global sport? And what does skateboarding’s future hold?

Yet, although corporate America fled, skateboarders themselves remained, creating new trick variations and continuing to push their beloved sport into new environments. The single most important trick developed was the hands-free ollie—popping the board into the air and landing back on it. With the ollie perfected, skateboarding’s possibilities became seemingly endless.

Despite the opposition, skateboarding became even more financially and logistically feasible for working-class and inner-city kids across the United States, like Stevie Williams of Philadelphia and Kareem Campbell of New York City, two revolutionaries of street skating. While skaters of color had been present since the 1970s, street skating’s accessibility broke down financial and racial barriers, diversifying skateboarding even further. 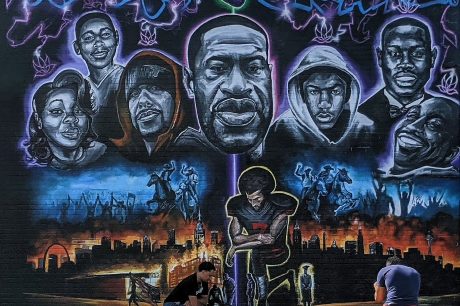 For many, skateboarding was more than a vehicle for physical play and social interaction. Skateboarding also became a means to make political statements that contested white-supremacist rhetoric and norms.

In the 1989 skateboard video Ban This, Tommy Guerrero—of Chilean, Filipino, and Ohlone Native descent—rides through the streets of San Francisco on a board with “END RACISM” written on it. The image of Guerrero proudly displaying the board reemerged on social media amid the Black Lives Matter protests of 2020. In 1991, Chris Pastras utilized his now famous “Dune Baby” skateboard graphic of a Black child to express his Black racial identity. Pastras recalls getting letters from young skaters from across the United States recounting racist encounters in which schoolteachers banned them from wearing T-shirts with the innocent “Dune Baby” graphic.2 Native Hawaiian skater Jaime Reyes used her skateboard graphics to both reject sexist tropes and pay respects to her native Hawaiian heritage. One of her pro-model boards featuring Hawaiian imagery and language currently resides in the National Museum of American History.3

Pioneering Black skateboarder Stevie Williams similarly utilized skateboarding to reject facile conceptions of inner-city youths, including within skateboarding. In a radical reclamation of a demeaning slur he’d been called by white skaters, Stevie founded his own skateboard company DGK—Dirty Ghetto Kids. Stevie’s mom spoke in a recent interview about how the name DGK both reflects and rejects certain racial realities: “That name represents the struggle. They think dirty ghetto kids are nothing, but we are something.” Today, DGK remains one of the most successful skateboard companies in the world. Despite ongoing economic and representational disparities within a historically white-owned industry, DGK demonstrates how skateboarding is far more than just a “white kids’ sport.”

Skateboarding, it seems, is not only reshaping US cities but also combating racism and thawing diplomatic tensions.

In the late 1990s, skateboarding made huge legal, cultural, and economic gains that carried over into the present. In 1997, California skateboarders successfully petitioned to have skateboarding designated as a “hazardous recreational activity”—a status that alleviates the high cost of skatepark insurance premiums by holding skaters liable for their own injuries. Many US states soon followed California’s lead by passing their own laws to offload insurance liability. Around the same time, skateboarding experienced a massive cultural comeback with the simultaneous emergence of ESPN’s X-Games and the record-breaking video game Tony Hawk’s Pro Skater.

With the legal risk of skateboarding injuries offloaded and a spike in the number of kids eager to skate, skatepark development once again took off. Unlike the short-lived skatepark boom of the 1970s, this park movement appears long-term. The number of skateparks in the United States has increased steadily from roughly 165 in 1997 to well over 4,000 as of 2019.4 Despite these clear gains for skateboarding, many city officials and residents remain irritated by skateboarders’ persistent presence in the public and private cityscape. Ironically, city officials and landscape architects have spent just as much time and money trying to prevent skateboarding as they have promoting it.

Do you ever wonder why there are metal U- or L-shaped brackets bolted into the tops of benches, ledges, and handrails in your city? Well, they’re called “skate stoppers,” and they cost anywhere from $10 to $40 each, depending on the quality and design. Sometimes, skateproofing is even integrated within architectural designs. In the late 1990s, architect Ken Kay not only redesigned sections of San Francisco’s A. P. Giannini Plaza to deter skateboarders but also hosted “Banish the Boarders” workshops for his professional peers.5 More recently, Manhattan’s Community Board 10 orchestrated a $100,000 renovation of the plaza at Frederick Douglass Circle to prevent skateboarding, which, the board argued, will “improve quality of life” in the area.6 Part of the renovation entailed carving out rusticated edges into the granite ledges surrounding the plaza. Although implementing rusticated edges spares the public eye from metal skate stoppers, there’s an obvious paradox in physically scarring public architecture so as to prevent skaters from scarring it themselves. 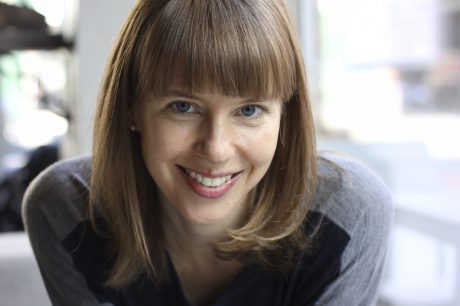 “Winning Is Not Uncomplicated”: Louisa Thomas on Sports

Skateboarding, it seems, is not only reshaping US cities but also combating racism and thawing diplomatic tensions. The aforementioned Cuba Skate is merely one of many skateboarding nonprofits that have emerged in the past few decades. Outside the United States, Canada, and Europe alone, there are at least 115 “social skateboarding projects,” which range from DIY skatepark crews to community outreach groups.7 Skateistan, featured in the Oscar-winning documentary Learning to Skateboard in a Warzone (If You’re a Girl), provides youth education and skateboard programs for working-class girls and boys in Cambodia, South Africa, and Afghanistan. Good Push Alliance, an initiative partnered with Skateistan, provides workshops and resources for up-and-coming social skateboarding projects. While California remains an integral part of the skateboarding world, groups like Good Push Alliance will ensure skateboarding continues to grow well beyond the Western world.

The 2020 Olympics, although clearly a notable event, is much less of a peak than it is another page in skateboarding’s colorful history.