Sketches of Spain 1: A Vegan Bunny in Barcelona
This is the latest installment of Public Streets, a biweekly urban observations series curated by Ellis Avery. Via Laietana, one of the biggest streets in Barcelona, a city where making or ... 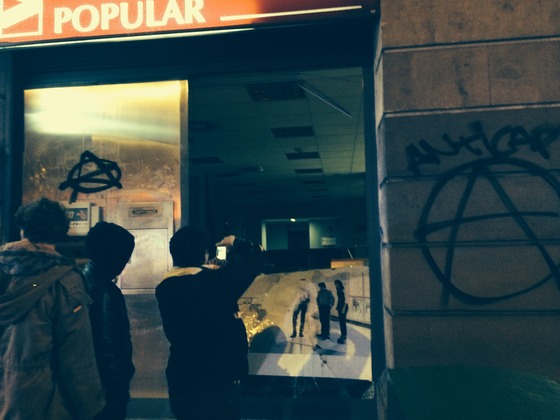 Via Laietana, one of the biggest streets in Barcelona, a city where making or participating in grafitti warrants a 2,000 Euro fine, runs all the way to the sea. Just the other night, several young people dressed in black tore down a bank window on this street, bashed an ATM machine and left enormous black “A”s on the glass and stone columns. After the shock had passed, people stood and took pictures with their iPhones.

North of Laietana and east of Jaume Primer gather the crowds of Carrer Princessa, a wide street of slow footsteps and stone. Beyond them, past the violin player and the tango dancers with the transistor radio, opens a cathedral clearing: Santa Maria Del Mar, with its forest of candles, its sudden drop in degrees. Hunched on the cathedral steps, a woman is draped in black, her bare toes curled over the steps. She holds a sign.

Back in the sun, the braid of back streets in El Borne leads to the long rope of Carrer d’Avinyo. Someone has spray painted a door handle on Catalan wood just a few feet away from Roman-era stone. The walls of this city are old, and still ring with talk of God, King, Franco. A little over 30 years ago, the Catalan language was outlawed, preserved in whispers to children, heard only by the walls of private homes. The balconies of these homes still arch over the streets of El Borne, their window panes as high as a prayer. 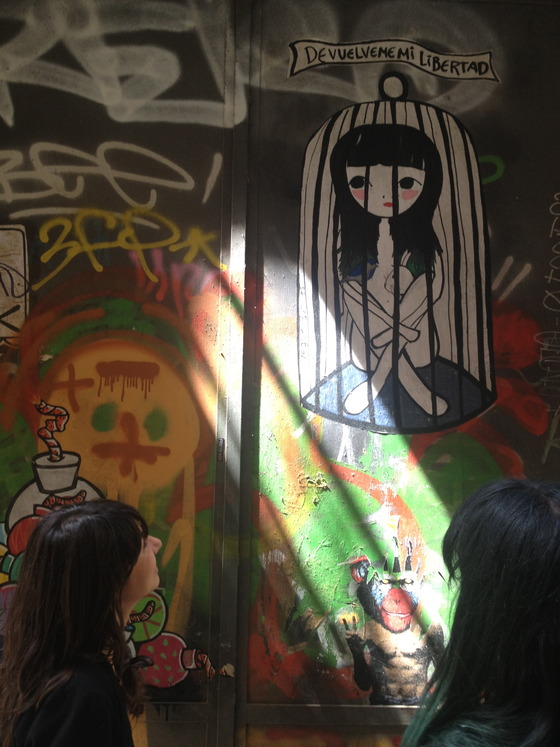 East and uphill from an arrestingly colorful tile shop lies a cloistered little square. In this cool tuck of shade on a wall with its back to the street crouches a girl of paint, holding a little bunny of paint, the two of them curled in a painted cage.

“The street is a room that belongs to everyone,” says the young graffiti artist. “But sometimes,” she sighs, “I just need to paint a bunny holding a cupcake.” Vegan Bunny, as she calls herself, pauses and pouts her pierced bottom lip, adding, “Painting is the only thing that makes any sense to me.”

Barcelona is a city with a long history of protest. And today, a small part of this history is alive in the shape of a single girl from Peru. She strives, she says, to make art at any cost, and reject the cost of money at every turn. She moves through the shadows, her paintings sealed by sunrise long after she leaves, “Because” she explains, “I am free when I am not seen.”

But if you walk the streets of Barcelona, you may catch a glimpse of Vegan Bunny, her emerald hair partly covering her wide eyes, the backs of her legs tattooed with birds fluttering out of an ink cage, headed for heaven or some other public space.