Sketches of Spain 2: A Simple Life in Salamanca
This is the latest installment of Public Streets, a biweekly urban observations series curated by Ellis Avery. “Go to Salamanca!” The open mic at El Rastrel—a vegetarian tapas bar in Salamanca ... 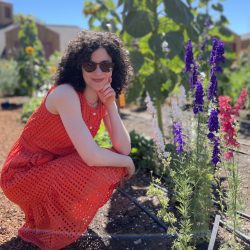 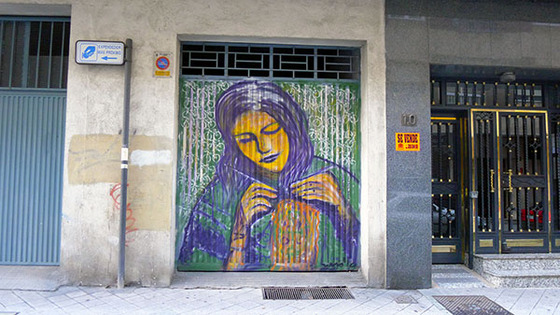 The open mic at El Rastrel—a vegetarian tapas bar in Salamanca, Spain—is so crowded that some of the spectators are standing on the stage. People pack the vestibule and the stairs that lead to the bathroom. Everyone claps along as the balding man with an American accent and one curiously stiff arm sings of Salamanca’s best-known attractions: sightseeing and partying.

“Foreigners love Salamanca,” a madrileño recently said to me. And it’s no wonder why: everything touristy in this small university town runs to excess. Here you can find not one, but two picturesque cathedrals, in unique blond sandstone that came from local quarries; not one, but two drunken New Year’s fiestas. “University” New Years, in early December, attracted close to 45,000 people in 2013, many of them students bused in from other parts of Spain.

“Let that time pass when we were imprisoned in Madrid …”

The song is “A Simple Life,” by the local Salamancan group Baden Bah!, and the neighborhood where its music video is set is called Barrio Oeste, Zona Oeste, or ZOES for short. This is the Salamanca that most tourists don’t see. The buildings are holdovers from the ’60s: cheaply made and crammed together. There are no parks. Plaza del Oeste, the neighborhood “square,” is a traffic roundabout. Yet the close-set buildings have been transformed by public, local art that makes another world out of these claustrophobic streets. Here, one can live a “simple life” in a neighborhood that looks like an impersonal city but feels like a close-knit community, coming together to make and enjoy art. 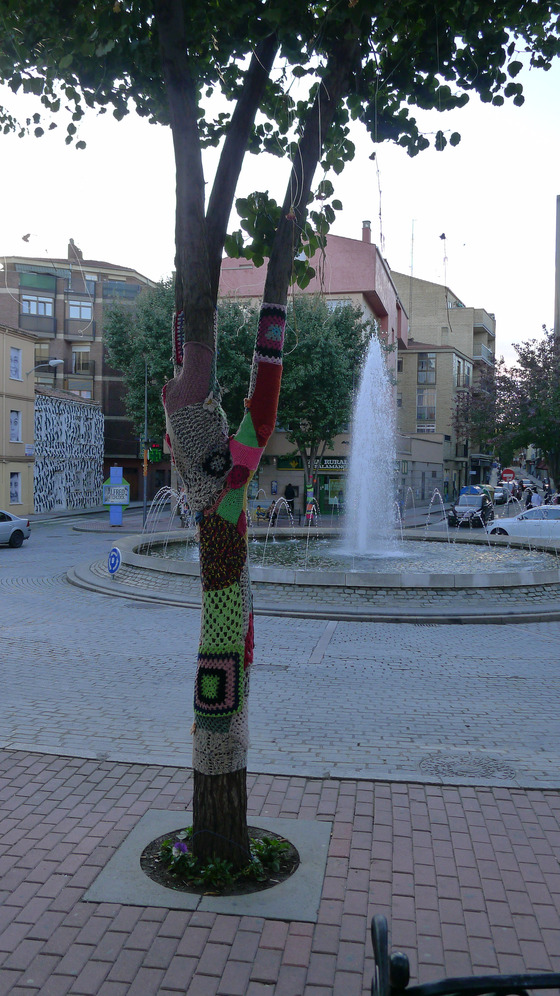 A tree in a sweater, by the Penelopes of Quedamos y Punto. Photograph by wahnyc / Flickr

The scanty trees that line Plaza del Oeste wear crocheted cozies. A bicycle—with wheels, seat, handlebars, basket, tubes, and even kickstand encased in crochet—leans against a wall with a woven sign announcing that this is where Barrio Oeste begins. A yarn-wrapped ladder rests against the plaza’s café and cultural event space, La Salchichería. The name means sausage shop, and someone has hung crocheted garlands of orange salchichón and pink morcilla on the inner walls.

The plaza has been beautified since 2013, when the ZOES Association of Neighbors invited a group of local yarn enthusiasts, the Penelopes, to decorate for spring. The yarn stays year-round now, with seasonal adaptations. On November 25, the trees wore orange armbands to honor efforts against gender violence; as of this week, they bristle with Christmas lights.

When the elements take their toll on the yarn, the Penelopes renew the decorations in weekly crochet sessions. Locals can participate for a small yearly fee. The atmosphere is festive. Someone brings truffles, a cake, a bottle of wine. There is bickering about who will rework which part of the neighborhood bicycle, whether the current yarn can be recycled, and how; there is cheerful talk of a celebratory block party when the work is done.

Crochet may seem fusty: recently, as two Penelopes sat crocheting in La Salchichería, onlookers reminisced about their grandmothers. (They later asked how they could get involved with the group.) Yet the neighborhood association sees crochet as part of a worldwide “Urban Knitting movement” that revitalizes urban streets. As their website puts it, crochet is graffiti that is ecological, non-staining, respectful of its environment, therapeutic for relieving the stress of modern life, and good for keeping the trees warm.

Everyone is involved. A member of the neighborhood association recently posted on Facebook that someone walking on Avenida de Portugal had noticed a tree cozy coming unstitched. She wrote to the neighborhood association, who got in touch with the artist, and immediately the process of repairing the damage began.  “Sometimes people ask us, ‘How many people are in ZOES, that you can do the many things you do?’ Well, the answer is that our collaborators are legion … Thanks to you all, who make so many things possible!” 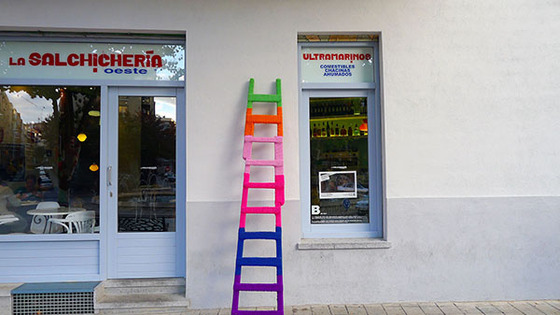 A yarn ladder, by the Penelopes of Quedamos y Punto. Photograph by wahnyc / Flickr

The rest of the neighborhood has no trees, but it does have hundreds of garage doors. Taking advantage of its materials, the Association has invited people to paint them. The system benefits everyone, said the president of the Association, Inma Cid. Artists, particularly young artists out of work due to the financial crisis, have the opportunity to win recognition; businesses have the opportunity to make their storefronts more appealing; and the neighborhood becomes more beautiful and intimate in the process.

It’s working. On the streets that radiate from Plaza del Oeste, two blue-and-white hands spiral open in welcome. High up, a toymaker slots together a miniature truck while his workshop falls apart into sketched haziness on either side, reminding you that the mural artist had to be hoisted up on a construction crane to paint. On a garage door, a woman knits while white bicycles bubble up behind her like dreams: it is the story of how the bicycle in Plaza Oeste came to be beautified, retold in an image that itself beautifies the neighborhood.