Speculative Pulp Fiction
Margaret Atwood’s most recent novel, The Heart Goes Last, began as an unusual digital experiment. Starting in March 2012, the website Byliner played host to the “Positron series,” a sequence of ... 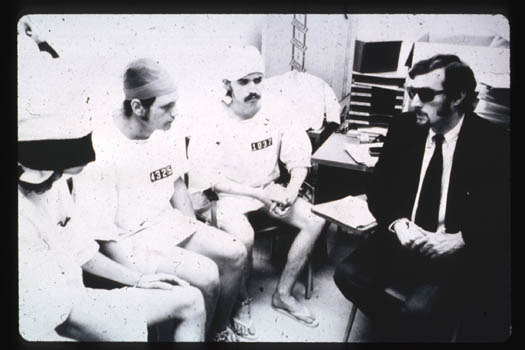 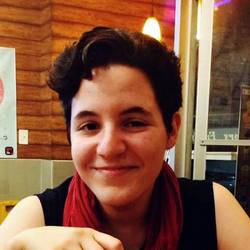 Margaret Atwood’s most recent novel, The Heart Goes Last, began as an unusual digital experiment. Starting in March 2012, the website Byliner played host to the “Positron series,” a sequence of interconnected stories published gradually over the course of a year, which Atwood claimed was an attempt to revive a literary tradition of serialization popular from the halcyon days of Charles Dickens up through the 1950s.

First came the opening section, “I’m Starved for You,” originally a stand-alone story that sets up a dystopian premise promising to teach us a lesson: “When you surrender your civil liberties, you enter a funhouse of someone else’s making.” The world of the tale is the product of a devastating financial crash (think 2008, only bigger) in which “the whole card castle, the whole system fell to pieces, trillions of dollars wiped off the balance sheets like fog on a window.” No one’s sure who to blame, but formerly middle-class couples like protagonists Stan and Charmaine are left unemployed, homeless, and on the run from roving gangs of criminals. While Charmaine earns minimum wage at the bar PixelDust, ever on the verge of resorting to prostitution, her husband Stan sulks, grudgingly relying on his ex-con younger brother Con (yes, really) for financial help.

The solution? The Positron Project, a purportedly utopian community so obviously sinister it’s introduced in the form of a faux-1950s advertisement, complete with rhetorical questions (“Living in your car?” “Remember what your life used to be like?”) and a too-good-to-be-true product (“Help solve the nation’s problems of joblessness and crime while solving your own!”). Positron’s society combines the principle of vacation timeshares with the Stanford prison experiment. Every other month, resident couples lead middle-class lives, enjoy middle-class jobs, and live in middle-class houses in Positron’s private town, Consilience. In the off months, they stay in Positron Prison, performing unpaid labor and making room in Consilience for their Alternates—the couples who live their middle-class lives when they’re in prison.

Widespread demand for a continuation on the theme led Atwood to produce three succeeding parts, “Choke Collar,” “Erase Me,” and “The Heart Goes Last.”1 A scheduled fifth and final part, “Moppet Shop,” was never released in serial form. Atwood fans eager to read the conclusion of the Positron series were instead encouraged to buy The Heart Goes Last, which collects revised versions of the first four parts and provides a resolution. A lone question on the Goodreads page for “Moppet Shop” gives voice to paying subscribers “cheated” by the bait and switch; “I just want the last episode,” pleads the user. To which we might reply: Be careful what you wish for.

Escalating suddenly into a feverish cacophony of nonsensical plot twists the New Republic called “triumphantly camp,” the final chapters of The Heart Goes Last can hardly be the resolution fans were hoping for. Reviewers like the New York Times’ Sarah Lyall have dismissed the novel’s unevenness on the grounds that it began as serial fiction; Atwood herself has spoken about the “psychological pressure” of serial writing, which “you can’t go back and change.” But one might instead question why Atwood, given the opportunity to reconcile some of the story’s choicer leaps and implausibilities in a novel version marketed as revised, didn’t “go back and change” more. Instead, Atwood allows the conventions of pulp fiction to dominate the novel’s second half, complete with a downhill slide into plot-driven story and a resolution that fulfills precisely those escapist power fantasies that the rest of the novel painstakingly denies.

All of this might come as a surprise for longtime fans of Atwood, who has staked a certain reputation on her disavowal of “science fiction.” Atwood’s relationship to the term itself is an old story among fans of the genre. In the distant past of 1985, Atwood was a science fiction icon, revered by fans for her novel The Handmaid’s Tale and the oppressive patriarchal religious dystopia it depicted. That reverence only grew with the 2003 publication of Oryx and Crake, the first in a trilogy of dystopian novels. But as Atwood once explained in an interview with the Guardian, “I don’t like being an icon. It invites iconoclasm.”

Cue the shot heard round the genre—Atwood’s appalling claim on BBC Breakfast that science fiction is no more than “talking squids in outer space,” a betrayal viewed by fans as second only to the 1986 SNL skit in which William Shatner told a convention’s worth of Trekkies to “get a life!” Atwood’s attempts at damage control channeled the resulting outrage into a question of semantics—the difference between “science fiction,” which “has monsters and spaceships,” and “speculative fiction,” which “could really happen.”

Perhaps Atwood was attempting to align herself with the “mundane SF” movement, a group of writers who vowed in their 2004 manifesto to produce a “no interstellar travel, no Martians” brand of science fiction. But her choice of term—“speculative fiction,” a charged phrase historically used by science fiction avant-gardists to elevate their plausible, “serious” science fiction above what they considered trashy space-opera pulps—only engendered further controversy.

Enter science fiction’s savior, Ursula Le Guin, who in a 2009 review of Atwood’s The Year of the Flood criticized Atwood’s “arbitrarily restrictive definition” and laid bare Atwood’s motivations for proposing it. According to Le Guin, Atwood’s dystopian novels “all exemplify one of the things science fiction does, which is to extrapolate imaginatively. … But Margaret Atwood doesn’t want any of her books to be called science fiction. … She doesn’t want the literary bigots to shove her into the literary ghetto.” This literary bigotry is more than just rhetoric; the very first line of the New York Times review of Oryx and Crake, for instance, proudly declares that “science fiction will never be Literature with a capital ‘L.’”2 While sympathizing with Atwood’s motivations, Le Guin refused to endorse Atwood’s proposed solution.

In the eyes of science fiction fans, the still-raging Atwood–Le Guin debate carries life-or-death stakes for the genre. The widespread acceptance of the term “speculative fiction,” as Atwood has defined it, would spell the end for continuing efforts to legitimize science fiction as a genre. The resulting schism, presented as a defensive measure to protect works from the “literary bigots,” would plunder genre-transcendent texts like The Handmaid’s Tale to fill the snobbish stables of “speculative fiction” and leave “science fiction” to describe only much-derided ’50s pulp novels.

With The Heart Goes Last, however, advocates of science fiction can put down their torches and bat’leths: The novel proves that speculative fiction can be every bit as pulpy as science fiction—even without the aid of “talking squids in outer space.” Whether it is entirely successful is another matter.

The problem lies in the novel’s awkward transition from a character study in its first half to a rat’s nest of entangled plots in the second. As if to mark this generic shift, a character shrugs off the first quarter of the novel when she tells one confused spouse, who’s trying to clarify a tangle of extramarital transgressions, that “we can’t waste time on the sexual spaghetti.” In the interest of introducing an espionage subplot that dominates the novel’s second half, Atwood ends up mocking her own 75-page investment in a portrait of Stan and Charmaine’s crumbling marriage.

Atwood allows the conventions of pulp fiction to dominate the novel’s second half.

The Heart Goes Last jettisons the moral lessons and emotional stakes of its first two parts and instead multiplies its subplots. In particular, Atwood disturbs her characteristically plausible dystopia with off-the-rails technology. For instance, Positron invents “imprinting”—a simple brain surgery that neurologically forces the patient to sexually imprint, “like a little baby duck,” on the first thing with eyes that they see after waking up from the procedure. The presence of such implausible technology in an Atwoodian speculative novel might be excused if it were used metaphorically to explore the feminist implications of prostitution. Instead, it’s used to set up a recurring slapstick gag in which a prostitute introduced earlier in the novel develops uncontrollable sexual urges for a blue knitted teddy bear.

This technology, like every dystopian element in Atwood’s novels, underscores the fact that her characters, despite delusions to the contrary, do not have free will. Characters like Stan and Charmaine are merely the playing pieces of more powerful figures who are in turn manipulated by yet bigger fish. Atwood’s dystopian novels are about finding out who’s really in charge, and it’s never the heroes, whose desires are inevitably fabricated, their decisions coerced. Tricked into signing away their dignity and their autonomy out of desperation, the cast of The Heart Goes Last is no exception, tugged along by a series of events that have little to do with who they are and what they want.

Despite its efforts to the contrary, The Heart Goes Last also becomes an escapist power fantasy—a persistent trope in pulp fiction parodied frequently at the novel’s beginning. We’re introduced to Stan first and foremost as a sexually frustrated man, emasculated by his own unemployment and lack of sexual appeal. Stan fantasizes incessantly about having total sexual control over Charmaine—not “the sex that Charmaine enacts, like yoga, with careful breath control,” but “sex that can’t be helped. No no no, yes yes yes! That’s what he wants.” For most of the novel, Stan is tied to disinterested female partners whose dominance is incompatible with Stan’s neurotic desires.

The final section of the novel, however, relies on a technological deus ex machina to stage a disturbing and implausible ending completely at odds with the novel’s insistence on depicting a world that denies everyone their fantasies. The novel’s conclusion resembles a 19th-century Dickensian denouement, or a kinky bastardization of a certain Shakespeare play about mismatched lovers that appropriately appears in The Heart Goes Last in the form of an all-male burlesque show, A Midsummer Night’s Scream.

While it begins with a recognizably Atwoodian dystopian premise, The Heart Goes Last becomes mired in the territory of pulp fiction—precisely the type of work from which speculative fiction tries to differentiate itself—and concludes with events that undermine the narrative and thematic work done by the rest of the novel. The Heart Goes Last’s disintegration into pulp fiction might be dismissed as a fluke, celebrated as Atwood embracing the pulp tradition, or interpreted as Atwood’s send-up of that tradition. But as the latest volley in a debate between Atwood and Le Guin about the definitions of speculative fiction and science fiction, the novel’s concession to pulp conventions undermines Atwood’s larger claim that the genre of speculative fiction is the antithesis of those cheesy, teenage male escapist fantasies about talking squids in outer space that are pulp novels. For fans hoping to rehabilitate “science fiction” as a genre designation rather than abandon it, The Heart Goes Last kindles hope that Atwood’s “speculative fiction” may soon collapse under the weight of its own contradictions. 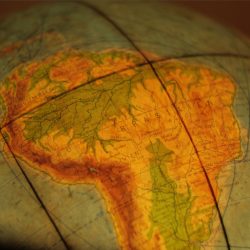