Spiralism: Haiti’s Long-Lost Poetics of Protest
Reading Frankétienne’s Ready to Burst is eerily similar to contemplating a wound that won’t heal, inspiring trepidation at what might soon—or potentially worse, not ever—change. Such was my ... 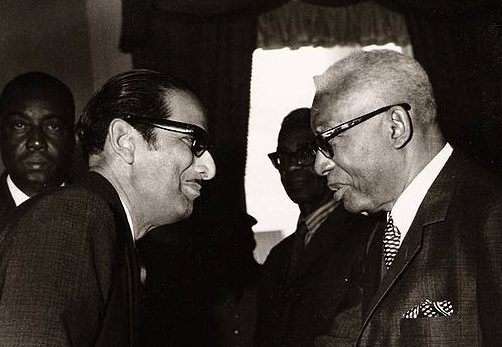 Reading Frankétienne’s Ready to Burst is eerily similar to contemplating a wound that won’t heal, inspiring trepidation at what might soon—or potentially worse, not ever—change. Such was my experience of following the novel’s protagonists, Raynand and Paulin, as they attempt to make modest yet always ill-fated bids for basic human happiness in a Haiti in the grip of the first Duvalier regime.

First published in French in 1968 (as Mûr à crever), Ready to Burst stands somewhat apart in Frankétienne’s oeuvre. Not only faithful to the author’s ongoing aim to write the “tremors of life,” it also seeks to define the poetics of Spiralism, a literary movement spearheaded, in the 1960s, by Haitian writers René Philoctète, Jean-Claude Fignolé, and Frankétienne himself. Still a prolific writer and visual artist, Frankétienne has garnered considerable international recognition in recent years, including being named a Commandeur in France’s Ordre des Arts et des Lettres in 2010; in 2011 a New York Times profile dubbed him a “father of Haitian letters.”1 Spiralism, however, remains largely unexplored by academics and journalists alike.

Kaiama L. Glover’s choice to translate—brilliantly—this particular work may be seen as a gesture toward reconnecting Spiralism with the broader literary history of the Caribbean, a field largely dominated by Martinican thinkers such as Aimé Césaire and Édouard Glissant.

What is Spiralism? The novel opens with lyrical flights that lay bare the movement’s objectives:

More effective at setting each twig aquiver in the passing of waves than a pebble dropped into a pool of water, Spiralism defines life at the level of relations (colors, odors, sounds, signs, words) and historical connections …

Re-creating wholes from mere details and secondary materials, the practice of Spiralism reconciles Art and Life through literature, and necessarily breaks with the hypocrisy of the Word … Spiralism uses the Complete Genre, in which novelistic description, poetic breath, theatrical effect, narratives, stories, autobiographical sketches, and fiction all coexist harmoniously …

These first pages are not set off from the main narrative as paratextual commentary; instead, they are woven directly into the fabric of the text they foretell.

Like its protagonists, caught in a historical moment that precludes self-fulfillment, Ready to Burst moves in disorienting circles. The space of the novel is at times conspicuously marked as Haitian and at others anonymous. Fleeting references to the Vietnam War indicate that the narrative takes place during the regime of François Duvalier (1957–1971), the infamous “Papa Doc.” However, the acts of Duvalier and his brutal governing apparatus are only cryptically implied, in references to various shadowy beasts, a discretion that allowed Frankétienne, who refused to go into exile like many of his peers, to keep publishing his work in Haiti. The blurry chronology and the capricious narration, which switches unpredictably from the third to the first person, constitute a vacillating narrative scaffold upon which situations repeat themselves in a spiral that binds the universal and the particular, the other and the self.

Raynand, a poor young Haitian man, spends his time walking through the streets of Port-au-Prince, sometimes desperately looking for a job, sometimes looking for nothing: “So goes Raynand, a locomotive of despair, life nipping at his heels … tired of walking endlessly and without any objective, [he] becomes an incessantly speaking mouth. The suffering flesh becomes word through my voice.” His friend Paulin is an educated young man tormented by the painstaking writing of a new kind of novel, which, he vows, will “liberate literature from the dictatorship of dictionaries and grammar books.” For Paulin, this liberation can only be achieved via an entirely new aesthetic, one he names Spiralism. But in this oppressed space, poverty, broken hearts, death, and natural disasters relentlessly topple the young men’s aspirations.

Frankétienne frequently interrupts his protagonists’ story with autobiographical passages, inducing lyrical fits in an already unstable narrative. These dreams, anecdotes, and poems combine to paint a portrait of the author’s formative years as a disenfranchised young boy in Haiti. In this masterfully controlled chaos of a novel, the quotidian and the exceptional rub elbows—and the autobiographical is often more surreal than the fictional. Of hearing of a distant war waged on faraway shores (that is, World War II), the narrator recalls:

The episodes of war, distorted by the popular imagination, seasoned with a dash of the marvelous, peopled our interior lives. Our heads were potpourris of nightmares and bloody dreams. Hitler was introduced to me by my cousin (who didn’t know much more than I did) as some sort of dragon. A magician. … Waking at night to use the toilet, I was actually afraid that I’d find him in my room—with that lock of hair on his furious forehead and that nervous mustache.

Frankétienne moves us from one moment to the next with staccato sentences that produce brief flashes of emotions and small windows of terror. The description of the last moments of young deportees who throw themselves to the sharks rather than return to Haiti offers a metaphorical yet extremely physical illustration of the violence of the times:

Four passengers had dived brazenly into the tide full of voracious sharks. Immediately, on the captain’s order, the old piece of scrap iron slows down. The sea, a roiling abyss, becomes an electric drum set, beating out a frenetic jazz rhythm. … Locomotive with buzzing mucous membranes pitilessly kneading their prey. … Swirling funnel in which the sharks, in a great red disorder, share pieces of arms, legs, and jagged flesh amongst themselves. … A porridge of effervescent colors and bloody turbulence. … An unbearable lyricism of purplish-blue stained with scarlet stripes. A massacre of slashed meat and exploded viscera.

Whether meticulously dissecting the elation of falling in love or bearing witness to unspeakable violence, Frankétienne’s prose oscillates between the concrete and the abstract, while his subject matter and style spiral between the high and the low.

Unlike other Franco-Caribbean genres such as Négritude or Créolité, Spiralism does not announce a geopolitical project, but its social dimension is made explicit in Ready to Burst. Like Jean-Paul Sartre’s notion of Total Literature2—a genre that would be legible to both the oppressor and the oppressed, and that would be the synthesis of destruction and construction—Spiralism’s Complete Genre is meant to be accessible to all. As Paulin, the writer and Frankétienne’s fictional alter ego, explains, Spiralism must tailor its shape to the needs of proletarian readers: “Our age doesn’t lend itself to reading literary works, boring in their too often useless length. … Between the fatigue of the night before and that of the day after … the laboring classes only have limited time—if they have any at all—to read printed characters. … And so, it’s a question of stating things quickly.” Spiralism aims to cleanse the written word of its bourgeois nature by freeing it from the conventional sentence. Thus unshackled, Paulin explains, the word acquires velocity and magnitude. It becomes “Inflated with meanings. Swollen with allusions.”

Spiralism is, perhaps above all, a state of mind in the face of life’s absurdity. “Whirlwinds. Vertigos. Storms. My life beats to the rhythm of turbulences,” declares Paulin. “I am a Spiralist. … It’s not that I’m looking to be scandalous. But because life itself emerges from the cry of blood. Wayward child of pain. Of violence. And that, too, is Spiralism.” On the one hand, these semantic splinters perform the feeling of insularity, of oppression, of restlessness, and of fragmentation that characterized the life of the Haitian people under the Duvalier regime; on the other hand, the resistance they stage against traditional literature symbolically punctures all forms of dictatorships.

Spirals are intrinsically infinite, incomplete. Paulin never finishes his novel and eventually vanishes into thin air, having perhaps been a figment of Raynand’s imagination all along. And much as the spiral gives and takes, Frankétienne reminds the reader that his work’s self-proclaimed aesthetic allegiance matters less than the sheer fact of writing: “I no longer worry about what I write. I simply write. Because I must. Because I’m suffocating. I write anything. Any way. People can call it what they want: novel, essay, poem, autobiography, testimony, narrative, memory exercise, or nothing at all. I don’t even know, myself.”