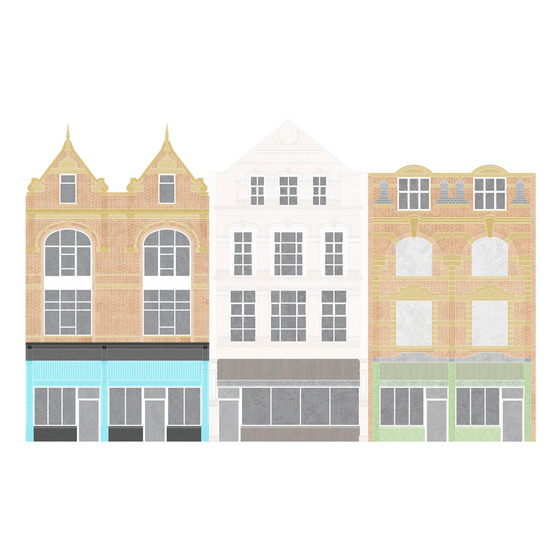 The Belfast city center is fractured, divided by motorways, parking lots, empty buildings, and big box stores. Its 19th-century heyday put it on the international map of textile production, which transformed and enriched its built structure. This tight architectural fabric was slowly destroyed in the 1940s by the Blitz, in the 1970s by road plans and “the troubles” and in the 1990s by large retail buildings. Few pedestrian streets traverse Belfast, and among them, most are recently-developed conduits for the passage of shoppers from one chain store to the next.

Within this seemingly bleak urban landscape, there remain a few areas that offer a richer, more architecturally and socially diverse, more memory-laden conception of public space. Current redevelopment plans, however, threaten the mere existence of these few remaining historic streets in Belfast.

This reality inspired the current project of one of the Masters in Architecture design units at Queen’s University Belfast. Our team (led by urban designer Michael Corr and myself) has been exploring North Street, one of the main arteries in Belfast City Center. Although North Street has a reputation for being run-down, derelict, and in need of redevelopment, it is one of the few intact 19th-century streets left in the area, and as such is worthy of study as an example of public space that is not strictly synonymous with commercial space.

North Street dissection. A link to high-resolution versions of the illustrations in this piece can be found below.

After mapping the main physical characteristics of the North Street in a street dissection, each student embarked on an individual biopsy of the site, responding to his or her own observation of the street as a public place.

Mary Anne Farenden looked at the fabric of the street through time, depicting a journey through Belfast’s architectural, industrial and commercial history. By drawing a sketch of North Street, she showed every façade on the street. This drawing highlights the empty spaces taken by parking lots, while showing a series of more or less iconic buildings. 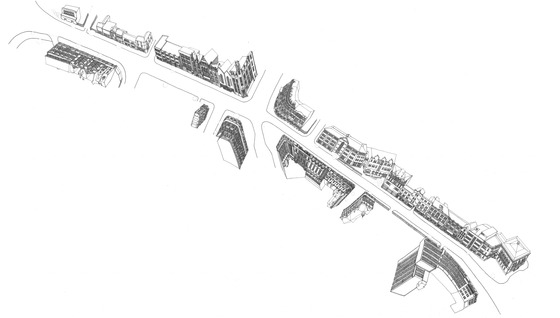 Brian Maguire looked at the occupation of the ground and top floors through the mapping of doors and windows, revealing the great number of unoccupied top floors on North Street. Stefan Downey looked at the social structure of the street reflected in the function of a series of buildings, which were originally shops and workshops on the ground floor and residences on the top floors. Even though the function of the buildings has changed, Stefan concluded that these buildings have an urban scale, functional proportion and tenure, conducive to sustainable occupation. 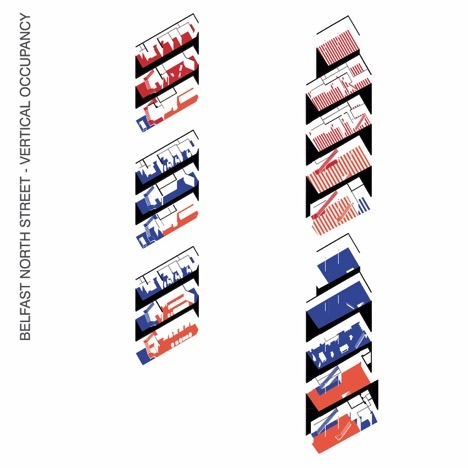 Gillian Zheng explored the Northern Bank building. This edifice, located at the ‘Four Corners’, was once the Belfast Stock Exchange and City Assembly Rooms, it evolved along with the fabric of the street, contributing to its sense of place. Callum Black looked at a series of heritage buildings by investigating the concept of beauty in architecture. Three Victorian buildings on North Street are due for demolition as part of a regeneration scheme: Callum is building an argument for their retention.

James Irwin investigated the trees on North Street and thoroughly analysed their relationship to the street, the adjacent buildings, and the people walking past. He identified different species that exist and the potential for planting many more to improve the atmosphere and livelihood of the sidewalks. 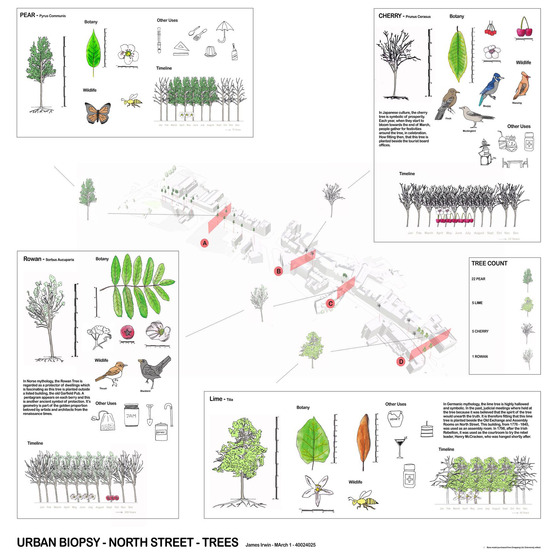 A series of students looked at how people behave in different contexts on the street. Lauren Wiley was interested in how people interact with each other and street furniture. For the biopsy, she produced a diagram study showing human interaction at the main bus stop in North Street. She observed that people avoid each other at the bus stop, and posited that a different type of stop might prove more inviting. 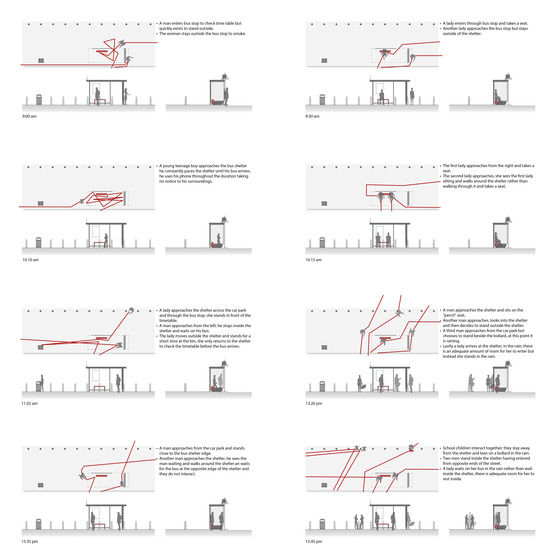 Matt McGibbon studied the ‘Royal Antediluvian Order of Buffaloes’ club. This is a self-proclaimed non-sectarian fraternal and charitable club near North Street, which is part of a worldwide organisation full of heritage and tradition. Ryan Berry looked at two very different cafes on North Street. Blinkers is a traditional local cafe that attracts many regulars with a friendly atmosphere, while Caffe Nero, a commercial chain, receives many irregular customers, generating a sense of unfamiliarity. 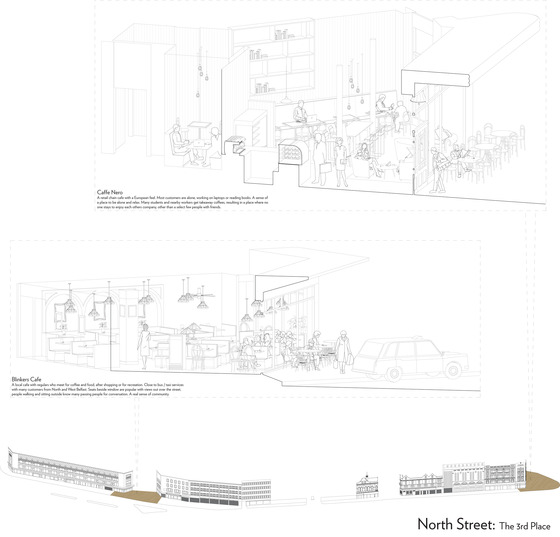 The 3rd Place – Blinkers and Caffe Nero by Ryan Berry

Fergal Donnelly explored a series of desire lines from North Street outward. A desire line or path is the preferred journey taken by pedestrians challenging the boundaries given by elements in the city. Fergal used this method to understand the thresholds between the street and the rest of the city. He identified fences and thresholds whose removal would allow a clearer navigation of urban space. Matthew Murnin investigated and catalogued all the security and safety thresholds present, making evident their impact on the street experience and redundancy of most of them.

Diversity was one of the main themes discovered in this project. Croina Freeman looked at the ‘patchwork’ of materials that can be found along upper and lower North Street. The variety of patterns and materials used on the footpaths create a unique landscape on one of the oldest surviving streets in Belfast. Ben Rey explored the signage of the street, to find out the diversity of fonts and patterns. Finally, Milda Paceviciute, though a very thorough cataloguing exercise, exposed the extreme diversity in the content of the shops on North Street, found in very few other places in the city. 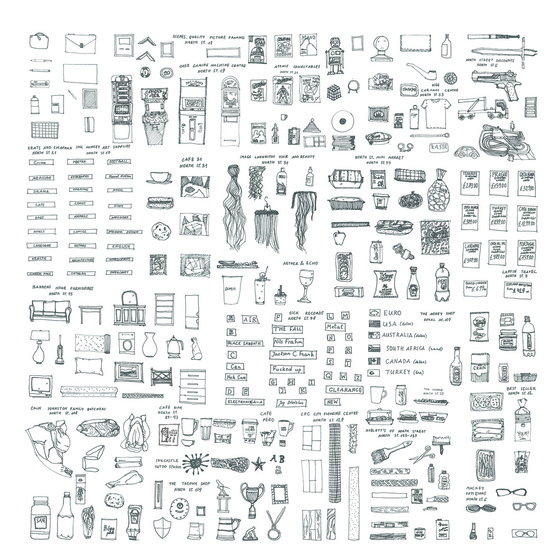 This exercise has helped us understand North Street and broadened architecture students’ understanding of streets as public spaces, and the potential impact that any intervention could have in such a space. Even though we found a series of problems, such as the low occupation of top floors and the empty spaces left by the parking lots, we identified a social, commercial, cultural and material diversity. This diversity would disappear if developers were to build the large urban plans approved for the area. We also highlighted the value of existing buildings with their potential for reuse, and the potential of improvement by new trees and urban furniture. Our conclusion is that North Street provides a good example of a lived, vibrant and diverse street, worth protecting from large-scale redevelopment.

Full-resolution copies of these illustrations are available here. For more information on the project, please visit: www.streetspacearchitecture.com