Surviving Hard Times with al-Hariri
Forget traditional “heroes.” The protagonists of some centuries-old stories are social climbers and tricksters, even cheats and cowards. 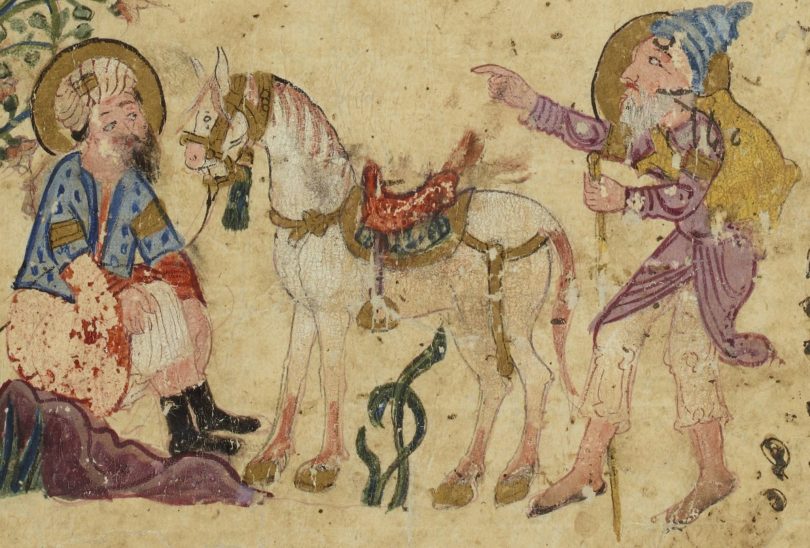 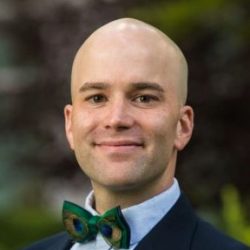 In the 11th century, an aimless grifter named Abu Zayd al-Saruji was chased out of his native city of Saruj by the Crusaders. Like Odysseus, the fictional Abu Zayd is a man of many turns: he outfoxes a judge, mimics a preacher, fakes illnesses, cross-dresses like an old woman, and above all, dazzles audiences with rhetorical wizardry. But despite his crudity and lack of varnish, Zayd also has much to say about his time and those seemingly better than he: “This era is cursed, and, as you can see, unjust. Folly is prized and reason deemed a fault; and wealth is a ghost, albeit one that haunts the only wicked.”

Abu Zayd’s story—told in 50 “rogue’s tales” written by the 11th-century Iraqi scholar and government official al-Qasim ibn `Ali al-Hariri—is episodic, satiric, and critical of social hierarchy, but with its own topsy-turvy ethics that makes it tough to discern right and wrong. In this sense, al-Hariri’s Impostures resembles Chaucer’s Canterbury Tales, as well as a whole lineage of “picaresque” stories: what we might call Europe’s version of Zayd’s Arabic “rogue’s tales.” And it resonates with the archetypal American picaresque, Saul Bellow’s The Adventures of Augie March, whose own rogue hero declares: “I am an American, Chicago born—Chicago, that somber city—and go at things as I have taught myself, free-style, and will make the record in my own way.”

Augie March, time to meet Abu Zayd. Obscured in the West for centuries, al-Hariri’s 50 tales (called maqamat in Arabic) are now within view of English readers in Impostures: Fifty Rogue’s Tales Translated Fifty Ways, the newest title in NYU Press’s Library of Arabic Literature, translated by UCLA professor Michael Cooperson. Here too, al-Hariri and Chaucer share a structural style. The Impostures, like the Canterbury Tales, rise and fall in register to fit the speaker, which makes for gratifying contrasts between the prim and social-climbing Prioress, for instance, and unfinished roustabouts like the brawny Miller or the suntanned Shipman.1 Likewise, the Impostures adopt a different style for each setting or subject of all 50 episodes.

Conceding that such a virtuoso performance cannot be translated, only imitated, Cooperson sees al-Hariri’s flamboyance and raises him 50 Englishes of his own—Chaucerian, Dickensian, Woolfian, Spanglish, Singlish, psychotherapy jargon, 1940s Harlem jive, and so on. A typical case is number 27, “The Wild East,” full of expressions associated with desert Arabs, plus the topics of horse thievery and camel wrangling. Cooperson renders it into American cowboy slang.

Yet though some wish to place them firmly in the picaresque tradition, the reality is that al-Hariri’s stories are quintessentially Arab-Islamic in both their religious and sociocultural flavor. They are masterful Arabic-language productions that, while impossible to convey fully into English, can tickle readers in any language. Wildly inventive, acerbic, and funny, the maqamat deserve to be read and enjoyed not in the shadow of Europe, but on their own terms.

Do al-Hariri and his tales of Abu Zayd connect to the Western literary tradition of the picaresque?

Sometimes our heroes aren’t straight and sharp arrows, but something messier: social climbers and tricksters, comedians and frauds, even cheats and cowards. Less King Henry, we might say, and more Falstaff. One 16th-century Spanish story, for example, features streetwise Lázarillo (“Little Larazus”), each of whose escalating exploits literally resurrects him to meet a worse fate: “I escaped out of the thunder and hit the lightning” (escapé del trueno y di en el relámpago, i.e., out of the frying pan and into the fire).2 In the Germanic tradition there is Till Eulenspiegel, a vagrant prankster who enjoys tricking people into touching or eating his feces; that’s why his name, “owl mirror,” is sometimes thought to be a pun meaning “asswipe.”3

Such stories—featuring a roughneck hero who thrills with vulgar humor and taunts the elites, who rambles around the world and puts on different guises—are called, in Western literature, “picaresque.”4 But do al-Hariri and his tales of Abu Zayd connect to this Western literary tradition?

In the Middle East, the prototypical rogue’s tale is the maqama—“standup” or “imposture”—a genre that hearkens back to both pre-Islamic Arabic su`luk (outlaw) poetry and the Indo-Persian narrative tradition typified by the Arabian Nights. These maqamat first came from the pen of Badi` al-Zaman (“Wonder of the Age”), who may have been inspired by earlier story anthologies like al-Tanukhi’s Al-Faraj ba`d al-shiddah (Deliverance Follows Adversity).5 But they ultimately found glory due to the beard-tugging labors of al-Hariri6 and his beloved hero Abu Zayd.

And the maqama, some have decided, is the direct ancestor of the later European picaresque.7 Both genres revolve around a witty, self-made rogue who repents—or does he?—of his deceptions by and by. But although maqama and picaresque share family resemblances, they are more like second or third cousins. Above all, the maqamat of al-Hariri are insidious and subversive. They make Arabic itself the prima donna, only to expose it as a tool of deception, prop up Islamic cultural institutions just to knock them down, and unmask aspiring social climbers for their pretenses—their impostures, as it were. 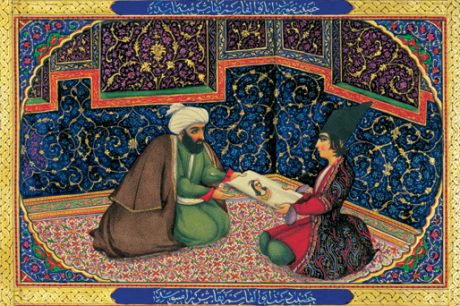 One Thousand and One Retellings

One divide between the picaresque and the maqama is the fact of language itself. While Arabic was the handmaiden of religion, learning, and empire, akin to Latin in Western Christendom, it was also the language of less formal writings, such as the maqama. But centuries later, the European picaresque was not written in Latin; instead, it was confined to vernaculars like Castilian, French, German, and English (even as these languages accrued post-Renaissance prestige). For this reason alone, the maqama had a more “elite” status than the picaresque.8

Then there is al-Hariri’s extravagant style—full of riddles, poems, and palindromes—that diverges from the much-touted realism of the picaresque.9 Several of al-Hariri’s Impostures showcase “constrained writing.” One example of this is Imposture number 32, “Jury-Rigged,” in which Abu Zayd produces some 90 legal puns.10 Or better still, Imposture number 6, “Plain Anglish,” in which con man Abu Zayd must draw up a petition with alternating Arabic words with dotted or undotted letters, a constraint that the translator, Cooperson, replicates by alternating Germanic- and Romance-derived English words. Such verbal ostentation has less of a place, when it has a place at all, in the plainspoken European picaresque.11

The European picaro is a wit and a wag, but his verbal tricks don’t steal the show like al-Hariri’s Arabic, to such an extent that language itself becomes the main plot device. Reading Lazarillo de Tormes, Lesage’s Gil Blas, or Thackeray’s Vanity Fair, one wants to ask: What happens next? But the question is largely about physical action—the next town visited, the next guildmaster adopted, the next lover seduced.

By contrast, a reader of the Impostures is no less bound to ask what happens next, only this time about verbal deeds. What kind of text will Abu Zayd compose, a poem, a letter, or a sermon? What register will he adopt? Which rhetorical constraints will be forced on him? These are no mere trifles, since it is through bewitching eloquence—an ethical inversion of the linguistic miracle of the Qur’an12—that Abu Zayd ducks chastisement and dupes his audiences out of their hard-earned dinars.

No matter how it is channeled, the picaresque is a genre of critique.

Speaking of money, social critique is everywhere present in al-Hariri’s maqamat, just as it is in the European picaresque. Catholicism bears heavily on the latter, whether in the anticlericalism of early Spanish tales (Lazarillo de Tormes was published anonymously for fear of persecution) or the pro-Church position of later, especially German, adaptations (like Der Landstörtzer Gusman von Alfarache oder Picaro genannt by Jesuit priest Aegidius Albertinus).13 An overall feeling of exhaustion with romanticized feudal society prevails. This exhaustion, in other national traditions, mutates into strains like the anti-Thirty Years’ War stance of the German-language Simplicius Simplicissimus14 and the 18th-century English picaresque’s scabrous details of lowlife culture.15 No matter how it is channeled, the picaresque is a genre of critique.

The maqama is also a genre of critique. But since Islam makes up its major religio-cultural context, the maqama tries to subvert types of Islamic religious discourse, such as the hadith-lecture, a teaching session based on words and actions attributed to the prophet Muhammad.

Also, many of al-Hariri’s Impostures lampoon a specific profession, institution, or class. For example: number 10, “Alharet eben Hammam His Tale,” shows Abu Zayd scamming a judge who—like Lord Appius in “The Physician’s Tale”—has a weakness for young flesh (this Imposture is in fact rendered into Chaucerian English). Number 15, “Hobson’s Choice,” scoffs at the niggling rules of Islamic inheritance and gets translated into Indian English, since “India was celebrated by pre-modern Muslims as the home of higher mathematics.” Number 22, “Leveraging the Flow,” mocks the squabbles of petty bureaucrats by staging a debate between chancery scribes (kuttaab) and court accountants (hussaab); in English, the debate unfolds as PR and accounting departments trade barbs in middle-management speak.

As for narrative point of view, the European picaresque is often told by the protagonist himself as he grows into his criminal powers. By contrast, al-Hariri’s maqamat employ a kind of Greek chorus: al-Harith ibn Hammam, “the plowman,” a clueless everyman whose relationship with con artist Abu Zayd invites comparison to other literary duos: Dr. Jekyll and Mr. Hyde; Boswell and Dr. Johnson; Piers Plowman and “Father Increase” (a literal translation of the name Abu Zayd and Cooperson’s riff on the virtues in Langland’s allegory).

Al-Harith’s inner conflict drives much of the maqama; he recoils from Abu Zayd’s moral flexibility, yet feels compelled by his tricks and guises. In the end, he is blinded by his own suspension of disbelief, always recognizing Abu Zayd too late before the latter vanishes and starts fixing his next performance.

Indeed, the notion of performance lies at the heart of the Impostures. As if in recognition of this idea, Cooperson has in fact translated several of them as plays: number 9, “Stringing Her Along,” is a Gilbert and Sullivan musical (including fresh lyrics to “I Am the Very Model of a Modern Major-General”); number 13, “The Cozening Quean of Babylon,” is modeled on The Merry Wives of Windsor; number 24, “Arabians Learn Arabian,” takes its inspiration from Pygmalion by George Bernard Shaw; and number 29, “The Behn of His Existence,” follows The Rover by Aphra Behn. 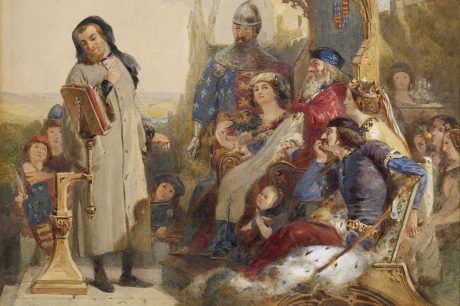 Both the European picaro and the tricksters of Arab-Islamic maqamat act how they hope to be in reality—successful, famous, wealthy, respectable—even if the reality itself is something different. The hypocrisy of social climbers haunts every page, as in the episodes where Abu Zayd dons the preacher’s cloak and delivers an incandescent sermon, only to escape to a cave for wine-soaked celebrations over that day’s haul. A satire of overweening piety, these scenes are just as much a tragicomic portrait of the self-made man.

Abu Zayd, then, really isn’t so different from Augie March, although the two are separated by epochs of time and miles of ocean. Each plays a role of his own making, in a theater of his own construction. After all, what could be more American (as Paul Cantor has recently argued) than a vaporlike rise to the top by any means necessary, including treason, graft, and murder?16 And yet, as al-Hariri shows, such behavior precedes America by centuries: the same excuse for Augie’s underhanded ways—namely, that times are hard—was used by Abu Zayd hundreds of years before. “Ah, the Damper waxes hot!” he says, appropriately enough, in the register of American revivalism. “But what bold Man in any Land / would hesitate to take the Pot when the Game is in his hand?”

Featured image: Maqama 27: Abu Zayd and al-Harith (1237), from an illuminated manuscript of the Maqamat by Al-Hariri (1054-1122), painted in Iraq in the style of the Baghdad School by Yahya ibn Mahmud al-Wasiti, 37 x 28 cm. Wikimedia Commons 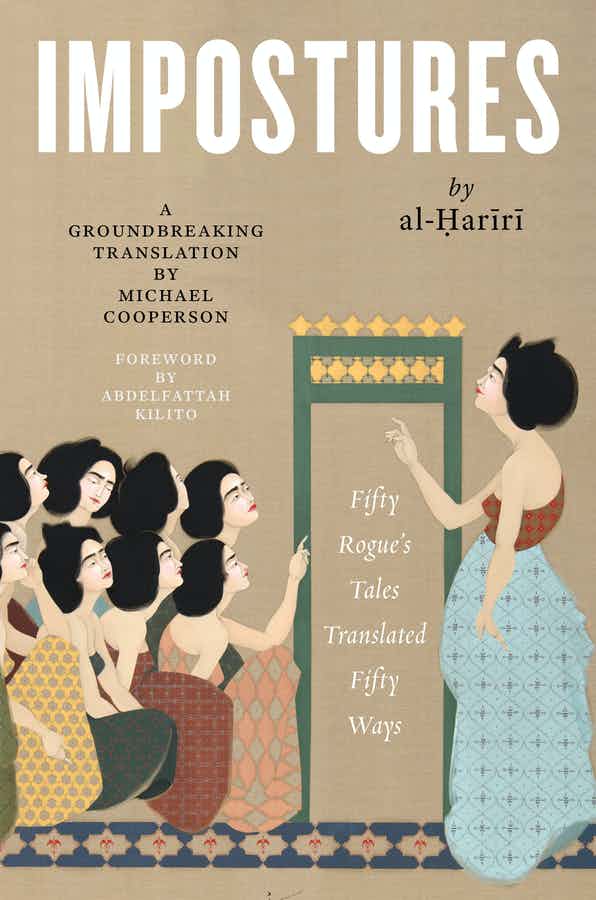