Technological Citizenship at the End of the World
Technology, we like to say, is making us antisocial; truncating our attention spans; addicting us; depleting our fossil fuels. This commonplace ignores and undermines the people who develop our ... 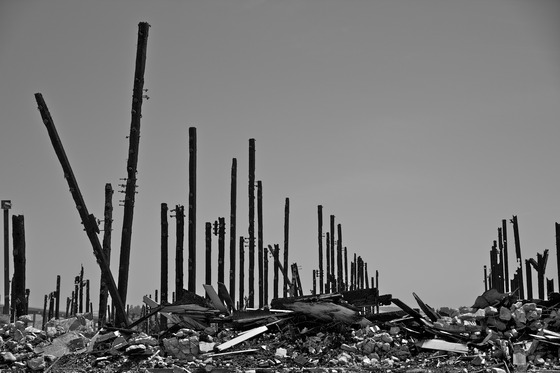 Technology, we like to say, is making us antisocial; truncating our attention spans; addicting us; depleting our fossil fuels. This commonplace ignores and undermines the people who develop our technologies, and exonerates the people whose use (or abuse) of tech ostensibly reveals their (our!) human frailties. This is doubly problematic. Engineers are people. The technological artifacts that are adopted by societies (or, more often, not), then blamed for the way we make use of them, are human products, created by people. I’m one of those people. Sometimes I read novels; this month, I read two.

In Emily St. John Mandel’s Station Eleven, a pandemic flu has wiped out an uncountably large proportion of the human population. The survivors hunt, forage, form some semblance of societal order; a group of musicians and actors make up a “Traveling Symphony” that performs Shakespeare and classical music for those in various scattered settlements.

This is a hopeful sign: that art will survive the apocalyptic plague; that humans will continue to value it. Truth and beauty blooming in a sidewalk crack.

What might a loss of our 21st-century comforts feel like? Mandel imagines it vividly. Characters lament that the Internet “is no more.” “No more reading and commenting on the lives of others, and in so doing, feeling slightly less alone in the room.” Two decades after the plague, the characters spend a moment at a light switch imagining that it might once again brighten the room, only half believing that this was once possible: “As always in these moments she found herself straining to remember what it had been like when this motion had worked: walk into a room, flip a switch and the room floods with light. The trouble was she wasn’t sure if she remembered or only imagined remembering this.” Freeways sit clogged with cars that ran out of gas and were abandoned. Airport gates house jets doomed nevermore to fly. How is it possible, her characters wonder, that they ever did? “Why … had he never recognized the beauty of flight? The improbability of it.”

What strikes me as more improbable is that human ingenuity wouldn’t have tried to resolve these absences—that, just as some were ensuring the survival of Shakespeare’s words, some others might not have figured out a way to make those abandoned cars start up again, perhaps powered by the vats of abandoned cooking oil left behind at fast food restaurants. Someone might have jerry-rigged a small-scale electrical grid. This, too, is human artistry. Yet Mandel—whose themes are art, drama, and immortality—leaves the working of these systems so mysterious that her otherwise clever and resourceful humans cannot fathom how to regain them; they can only house dead phones and impractical shoes in a Museum of Civilization.

Station Eleven is a beautiful book, one of my recent favorites. Its intricate structure and clear affection for its characters are wonderful to behold. Yet this failure of imagination on the part of the same characters—who are willing to dirty their hands in a variety of formerly unthinkable ways after the world they knew collapses, but are never even curious about whether it might be possible to get some of these technologies operational again—vexed me. The condition of celebrity and the plague of paparazzi receive much more of the novel’s attention than these “otherworldly” machines, from commercial jets to container ships.

Here’s the thing, though: technology isn’t, as Mandel seems to position it, an inhuman abstraction, a series of what she calls “taken-for-granted miracles.” It’s a human construction, a socially made system. Historian James Hansen has warned against treating machines as if they, and not the people who made them, are the ones who live and breathe. In this view, “the people who design, build, and use the airplane, and all of the social institutions that go along with those activities, play a subordinate role, as if they were all passengers in a plane that flies itself.”1

Again, humans stuck in a Station Eleven world full of engines (in those abandoned cars and airplanes), integrated circuits (in their phones, much discussed and then “curated,” but never once cracked open), and fuels to burn could surely harvest some parts and construct something new for what remained of society. It strains this engineer’s credulity that those in Station Eleven don’t. Humans would surely have figured out a way to supply themselves with water and sanitation—as the ancient Romans managed to do. Or grow crops, or locate or synthesize medicine. Or recreate the “miracle” of communication by kludging up a telegraph. And I submit that this too would be cause for hope—that circuitry, aqueducts, and thermodynamics might be as important as Shakespeare to what makes us human.

Sometimes it appears that Mandel understands this: “We bemoaned the impersonality of the modern world, but that was a lie, it seemed … , it had never been impersonal at all. There had always been a massive delicate infrastructure of people, all of them working unnoticed around us, and when people stop going to work, the entire operation grinds to a halt.” But it’s not just “people … going to work” that makes our technological world run; it’s people thinking up new devices, processes, and systems; creatively configuring electronic components in ever smaller containers; ensuring that the heat they generate can be safely dissipated. Engineers built our civilizations out of a human instinct to construct, to design, to create: to follow a Vitruvian ideal of truth, beauty—and utility. But Station Eleven shrugs its shoulders—well, too bad, no one went to work at the power plant for decades, therefore there’s no possible way we will ever again have power. It’s an elegy for “taken-for-granted miracles,” instead of a warning against taking them for granted. The latter might have been a powerful cri de coeur for the importance of appreciating how technology is developed and distributed, for “how things work,” for what is sometimes called “technological citizenship.”2 Technological citizenship means not viewing technology as a mysterious black box whose inner workings are inscrutable; it means recognizing the value of utility along with truth and beauty. Humans abdicate their role as engaged technological citizens at their own, and our collective, peril—this is implicit in Mandel’s post-pandemic world, but I wish it had been made explicit.

For though the narrative acknowledges the social construction of technological infrastructure, Mandel’s characters do not exhibit curiosity about how to get this infrastructure operational again; they start newspapers and put on shows and found new religions, but they don’t tinker or repair. How tragic that a post-apocalyptic world would hastily erect the siloed walls of the “two cultures,” even before they’d found something besides venison to eat.

Engineering is inherently sociotechnical, focused on meeting human needs; and understanding how engineers think, how engineering artifacts interact with societal development, and how technology is developed and distributed is a valuable facet of a modern liberal education, and of responsible citizenship in the world. Even—or maybe especially—at the end of the world as we know it.

At the close of Mandel’s book, two characters glimpse evidence that someone, at the horizon, has in fact managed to harness electricity again—but it’s a spectral signal, Gatsby’s green light at the end of the dock, out of the novel’s reach.

Of course, Mandel’s is only one view of how we may collapse, and of how we might begin to reconstitute ourselves—“dystopian fiction” is so common now that it’s one of the genres my sixth-grade daughter has learned comprise modern literature. But it’s hard to find examples that feature the type of consilient thinking we most admire today.

Both books offer us unnecessarily limited perspectives, shutting off whole dimensions of the human condition.

For example, Mandel’s characters are the opposite of Andy Weir’s astronaut hero, Mark Watney, in The Martian: an engineer/botanist who never met a life-threatening dilemma he couldn’t analyze and solve through his technical skills. Interestingly, Weir’s hero laments that his cultural artifacts are limited to 1970s reruns and a playlist that is heavily disco; but he doesn’t seem to derive much joy or hope from this bad art, or express a specific preference for another type of cultural companionship. This reader’s guess is that even if he’d had all of Shakespeare on hand, he would’ve stuck with Three’s Company. Watney doesn’t just live in his tech silo, he fortifies the walls and tricks it out with custom HVAC.

Cheryl Strayed, on her lonely trail in Wild, found comfort and drew strength from the verse of Adrienne Rich; yet Weir’s marooned astronaut doesn’t draw from a well of remembered poetry or song. Astronaut Watney seems to be the worst kind of technophile, more focused on problem-solving, tinkering, and numbers than he is on human emotion or introspection. Is he lonely? Does he have regrets, or yearnings? What do his struggles to survive reveal to him of the human condition? Will he conclude, as Station Eleven’s survivors did, that “survival is insufficient”? What a different tale this would be if he were an engineer/poet. Different, too, if Mandel’s characters had been the ones stranded—more lyrical, more lovely, and of course much shorter.

As an enthusiastic fiction reader, I was transported by both of these novels. But as an evangelist for technological citizenship and engineering as a sociotechnical system,3 I was frustrated. Both books offer us unnecessarily limited perspectives, shutting off whole dimensions of the human condition. Maybe any single book’s lens is narrowed to some degree by its author’s and characters’ preoccupations, but the missing parts of both these novels left me wishing for integrative art that imagines a more holistic human. A Traveling Symphony that had figured out how to amplify their voices, and illuminate their stage; a marooned Martian astronaut who took a moment between computations to reflect, or even to survey the landscape. Now that would be truly beautiful.