That Silver Building on Powers
East Williamsburg is fast becoming one of the most dramatically gentrified neighborhoods of Brooklyn, with glass-fronted condo buildings shooting up in their narrow lots like beanstalks in a ... 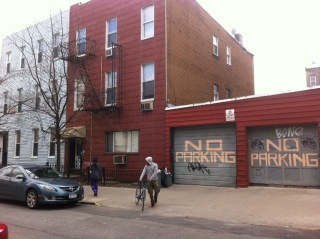 East Williamsburg is fast becoming one of the most dramatically gentrified neighborhoods of Brooklyn, with glass-fronted condo buildings shooting up in their narrow lots like beanstalks in a developer’s fairy tale. It also continues to be one of the ugliest. The problem with the area’s housing stock may be vivid to anyone who has read A Tree Grows in Brooklyn; its thin-walled tenements were flimsy to begin with, and its small, sagging wood frame homes are the kind that people get tired of having to paint. For decades residents of the brownstone areas were too poor to alter them, while in the ’50s and ’60s East Williamsburg experienced a degree of comfort that coincided with a period of enthusiasm for architectural prophylactics: synthetic siding, asbestos shingles, and more recently, baroque stuccoing normally found on a strip mall “ristorante” with an all-you-can-eat pasta buffet. Add to this the cement cherubs, scalloped canopies, and other unfortunate enhancements of the postwar era, and what Quixote of home improvement will be the first on the block to take an aesthetic leap of faith? 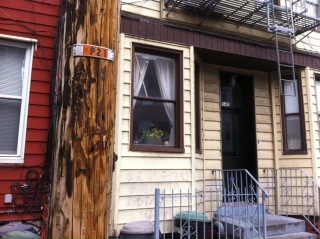 “I didn’t want it to be ‘Hi! I’m modern!’” said Ken Collins in an interview about his 10-year-old building on Powers Street, midway between the Graham Avenue and Grand Street stops on the L train. The four-story rectangle, with a single wide window to each floor, is clad in gleaming zinc siding down to the first floor, where a garage entry is surrounded by light-grey “penny round” tiles. The building has the look of a personal statement, and almost anyone who lives in East Williamsburg will know what is meant by “That silver building on Powers.”

“I wanted it to fit in with the neighborhood,” Collins said. “See how the lines of the zinc siding match the lines of the vinyl siding on the other houses? The windows are bigger, but just a little bit. These condos they’re building all have huge storefront windows, but then people move in and everyone has a different curtain. It ruins the effect. They’re kind of shoddy, I think.” 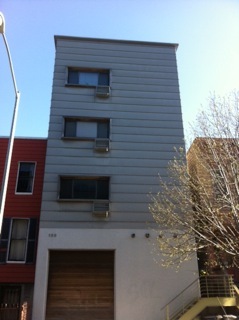 Anything interesting to look at probably has a lot more thought and work behind it than the casual bypasser can guess. “The zinc on the facade was done using the standing seam technique, which is what is used for metal roofing. I was thinking about churches in Europe with their zinc roofs, and how the metal turns blue over time.” To demonstrate, Collins picked up a flowerpot whose matte metal surface was dark indigo with age. “This is zinc. The penny round tiles on the garage also have a little blue around the edges, to bring out the color of the siding.”

Working with an architect friend, Collins designed the building to have three rental apartments with balconies to the back. As for his own design training, it was “just from books and magazines!” Collins said.

Pressed further, Collins admitted without hesitation that the building was an investment property. Why, then, take the extra time—and money—to design something he actually cared about?

“I walk around New York and I see all these famous buildings, all these amazing buildings. I wanted to be part of that allure,” he said.

A few blocks over on Ainslie Street is a row house with a tangerine-colored door.  The house is clad in natural wood siding that has begun to take on a subtle grey patina. One sunny day, one of the owners, Ethan Long, was found outside, pouring his own cement stoop into a mold made out of plywood boards and setting it with antique newel posts. Long, a sculptor and set designer, also installed the cedar siding, and made an elaborate faux-stone cornice out of wood.  Giving a tour of the inside of the house, his wife, Nicole Marino, a chef, said, “We always joked that we could be on one of those P.B.S. shows like Frontier House, because he’d be chopping wood and I’d be cooking.” Everything in the house seems to have been saved from somewhere else. The stone on the kitchen floor was rescued from the set of a Whitney Houston video, the fence in the backyard was made from the attic floorboards, and the attic floor itself was pieced together from what used to be the parlor floor. As for the front door—salvaged from somewhere Upstate—“We love orange,” Marino said. “My mom’s from Holland.” 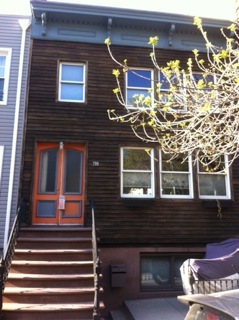 The Ainslie Street house embodies a quirky, D.I.Y., down-homey Williamsburg aesthetic—call it “Boho Craftsman”—to which Collins’ more European approach seems nearly fabular in its stylistic opposition: preserving the past versus referencing it to make a hip, contemporary statement. Set against the kitschy drabness of East Williamsburg, they are like an architectural VHS and Betamax: two self-contained visions of the future carrying on in feigned ignorance of each other until the day that one, perhaps, prevails by force of popular choice. But for the moment, only the condos are winning.

Featured image: East Williamsburg (2014). All photographs by author
This is the second installment of Public Streets, a biweekly urban observations series curated by Ellis Avery.