The Algebra of Justice
The Underground Railroad is among the most celebrated instances of civil disobedience in US history. But, though famous and beloved, it’s cloaked in mystery. As an extralegal, clandestine operation ...

The Underground Railroad is among the most celebrated instances of civil disobedience in US history. But, though famous and beloved, it’s cloaked in mystery. As an extralegal, clandestine operation, it left relatively little in the way of documentation. We will never know how many slaves absconded to freedom or how many activists helped. “For very different reasons,” writes the historian Eric Foner in his new book, Gateway to Freedom: The Hidden History of the Underground Railroad, “both abolitionists and slaveowners had a vested interest in exaggerating the numbers—the former to emphasize the black desire for freedom and their efforts ‘like noble heroes … for suffering and oppressed humanity,’ the latter as evidence of a northern conspiracy to undermine the peculiar institution.”

The paucity of hard facts makes the UGRR pliable, capable of supporting many conclusions. Succeeding generations have debated how well it was organized, how many were involved, and who was in charge. These debates are revealing, not only about the UGRR and its participants, but also about the generation forging a new understanding of the past and the struggles its people faced. How we understand the UGRR in our time says something about how we see activism in general.

The first, and perhaps most enduring, draft of this memory came from Wilbur H. Siebert, a history professor who between 1896 and 1951 published several influential books on the UGRR. Relying on newspaper records, interviews, and questionnaires sent to surviving abolitionists (almost exclusively white men), Siebert “presented a portrait of a highly organized system involving thousands of northern agents and a ‘great and intricate network’ of stations leading to Canada,” writes Foner. Unsurprisingly, in this version, the UGRR was directed by benevolent whites (particularly men) who risked everything to free ignorant and helpless slaves from bondage. But beyond the naked racism and sexism of Siebert’s time, his vision of activism is consonant with the zeitgeist of the early 20th century: in an era of communism and fascism, labor unions and the New Deal, social change was understood to be the product of large-scale, collective effort. Siebert looked at the UGRR and saw order.

It wasn’t until the 1960s, particularly with the publication of Larry Gara’s The Liberty Line, that Siebert’s conclusions were seriously challenged. This new generation—the generation of the Civil Rights Movement—sought to place African Americans at the center of their own story. The UGRR was viewed through the lens of “agency.” The fugitive slave earned his or her freedom, for they left of their own initiative and often received no help before reaching free territory; once they arrived, it was often the free black community who aided the fugitives on their way to Canada, Massachusetts, or upstate New York. The remembrances of white abolitionists, upon which Siebert had so heavily relied to write his books, were called into question for being self-serving, even dangerous, for they spoke of race and equality as issues long resolved. A consensus was reached that the UGRR was nowhere near as vast or organized as the popular imagination would have it. Some began to wonder whether such a thing as the UGRR even existed at all.

Foner’s Gateway to Freedom makes a valuable contribution to this old debate. The book is focused on one particular way station on the UGRR—New York City, which, though a crucial link between Philadelphia and upstate New York, has long been neglected by scholars—and a handful of antislavery activists working in the decades before the Civil War. NYC’s role in the UGRR had been largely forgotten by history; unlike Boston or Syracuse, where antislavery sentiment was ubiquitous, New York was hostile to abolitionism, demanding a greater degree of secrecy by activists. Slave catchers roamed the streets, hunting for fugitives. The municipal government was dominated by pro-South Democrats and zealously applied the federal fugitive laws. The homes of abolitionists, black and white alike, were burned to the ground by mobs. The city’s economy was intimately related to the production of cotton in the South; its merchants financed the crop, insured the lives of slaves, and shipped the “white gold” to Europe.

It’s thus understandable that UGRR activists in NYC wrote almost nothing down, leaving a dearth of material for historians to work with. But recently, a remarkable manuscript was discovered in Columbia University’s archives: a meticulous record by the journalist and abolitionist Sydney Howard Gay, detailing the stories of over two hundred fugitive slaves who came through his office in 1855 and ’56, and describing exactly how he and his accomplices aided them on their way north. It is among the most significant documents related to the UGRR to be discovered in decades. When checked against the records of William Still (the indefatigable organizer at the heart of Philadelphia’s abolitionist community, who sent many escaped fugitives directly to Gay’s office), we have a rare glimpse into the inner workings of an enterprise infamous for its unknowability. Where once was only mystery and tall tales, now are hard facts.

Unlike Boston or Syracuse, where antislavery sentiment was ubiquitous, New York was hostile to abolitionism, demanding a greater degree of secrecy by activists.

Gay’s Record of Fugitives is the backbone of Gateway to Freedom. Compared to Foner’s previous works—most notably his sprawling, epic Reconstruction: America’s Unfinished Revolution, 1863–1877—this book is taut, aiming to fill one particular gap in an existing body of scholarship. His control is masterful. As an interstate operation spanning three decades, the UGRR as a topic lends itself to sprawl, but Foner stays with New York, referencing national developments only insofar as they relate to the city.

The major characters in Gateway to Freedom—Gay and his associates at the National Anti-Slavery Standard, Louis Napoleon and William H. Leonard; silk merchants Lewis and Arthur Tappan; black ministers Theodore S. Wright and Charles B. Ray; and David Ruggles, a free-born black man who was the driving spirit behind early efforts to help fugitives in the 1830s—all worked in relative isolation. Activists “faced a chronic shortage of funds,” and though after the Civil War many would claim to have participated in the UGRR, the “work was conducted by a handful of individuals, in far greater secrecy than was common in parts of the North with more pervasive antislavery sentiment.”

While they occasionally collaborated on specific causes, activists were divided on several questions: What was the role of religion? Could change be accomplished within the political system, or was it unsalvageable? When was violence justified? Who should lead their efforts? Brief periods of unity devolved into internecine battles.

“The picture that emerges from recent studies,” writes Foner, “is not of the highly organized system with tunnels, codes, and clearly defined routes and stations of popular lore, but of an interlocking series of local networks, each of whose fortunes rose and fell over time … The ‘underground railroad’ should be understood not as a single entity but as an umbrella term for local groups that employed numerous methods to assist fugitives, some public and entirely legal, some flagrant violations of the law.”

Given how each generation, influenced by the horror and hope of its time, sees old historical events anew, we might do well to ask ourselves what our modern understanding of the UGRR says about us. What does it say about how we believe social change occurs? 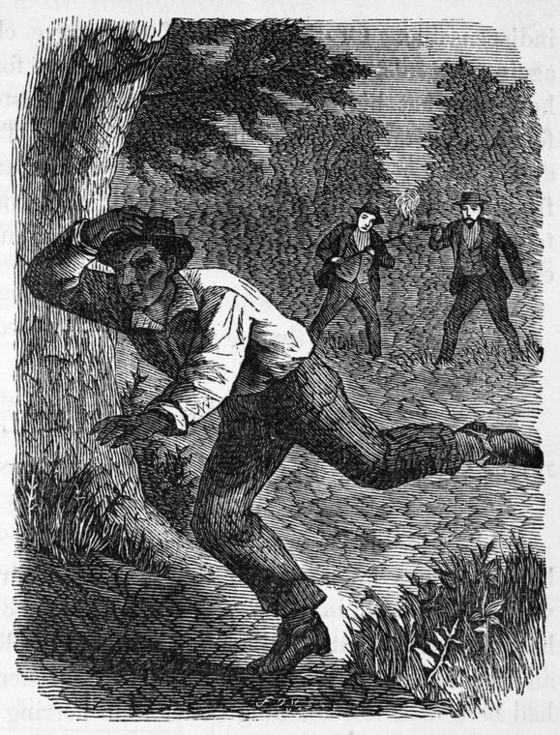 Our horror is a handful of fundamentalists capable of changing the contours of our imagination with an act of unspeakable carnage, or a lone school shooter who can force the pen of legislators and inspire legions of copycats. Our hope is a computer technician contracted by the NSA divulging state secrets at great personal risk, or the nebulous, all-consuming ire that swept through the streets of Ferguson or Baltimore. It is little wonder that we look at the UGRR and see fragmentation. Dead is the dream of uniformity and collective effort, the hallmarks of the Old Left. At best, the agents of the UGRR worked with a few trusted personal contacts, each involved in what was essentially a private struggle to do the right thing, as they understood it. It looks like lonely work.

In our time, for better or worse, change is wrought by rogue individuals or small groups in loose alliances, who—like Harriet Tubman or Sydney Howard Gay, Edward Snowden, Osama bin Laden, or Timothy McVeigh—unilaterally decided which laws to break and which to obey, according to their own moral calculations. Surely we all agree that the ends of those who helped slaves abscond to freedom were righteous and morally defensible. But their means ought to give us pause; not only did they break any number of city or state laws, but also the Constitution itself, the highest law of the land, which, though reprehensible to us now, was explicit in its defense of slavery. They were right to do so, I say. But the algebra of justice is different for each alike, and inscrutable. Doesn’t the aspiring suicide bomber feel, in the deepest and most ineffable way, that his actions are holy, higher than any law, constitution, or court decree? Didn’t the Charlie Hedbo
gunmen believe their faith superseded France’s protection of free speech, justifying the spilling of blood over a cartoon? John Brown, a close friend and accomplice to many of the most famous UGRR agents, illustrates how someone can do terrible things for the best reasons. Perhaps now that we’ve come to the consensus that slavery was wicked and that undermining its existence was necessary, we can explore the thorny implications of activists taking the law into their own hands.

Gateway to Freedom: The Hidden History of the Underground Railroad