The Art of (Not Forgetting) War
Many of the images in the Metropolitan Museum of Art’s new exhibit World War I and the Visual Arts depict the war in such violent detail that their authors ... 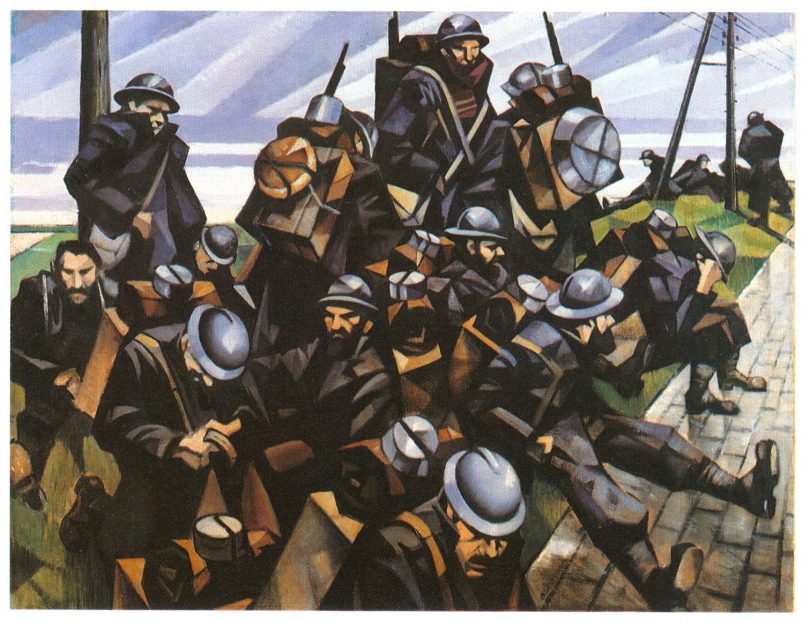 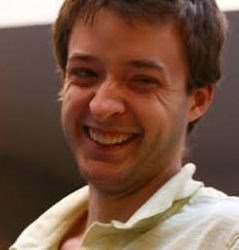 Many of the images in the Metropolitan Museum of Art’s new exhibit World War I and the Visual Arts depict the war in such violent detail that their authors were censored, arrested, and even exiled in the 1920s and 30s. In 1924, for example, the German infantry veteran Otto Dix marked the 10th anniversary of the start of the war by exhibiting his painting The Trench at a museum in Cologne. The morning after an artillery barrage, bodies litter the scene, their hands and fingers twisted at torturous angles, their wounds oozing blood. One critic called it “enough to make one puke.” The museum hid the canvas behind a curtain, but many Germans were still offended by Dix’s unheroic vision of the war. There was a public outcry. The museum director was forced to return The Trench to Dix–though not before the scandal drew large crowds to see it. The Nazis later exhibited The Trench as “degenerate art,” and it disappeared during World War II.1 Dix painted his ghastly memories of the Great War, he said, because Germany was “already beginning to forget.”2 Despite the best efforts of artists like him, that self-imposed amnesia ultimately led to another war.

Dix would approve of World War I and the Visual Arts at the Met, which is meant to mark the centenary of America’s entry into the war in 1917. Dix himself features prominently in the show—etchings from his 1924 book The War take up an entire wall—and the exhibit echoes his tone: grim, often grisly, filled with melancholy, tinged with rage. Two other excellent exhibits about the war now run concurrently in New York: the Museum of the City of New York’s “Posters and Patriotism: Selling World War I in New York,” on through October 9, and the American Jewish Historical Society’s “1917: How One Year Changed the World,” on through December 29. All three shows are worth a visit, but the Met’s curators have crafted a uniquely unflinching and emotionally affecting look back at the brutality of the war.

The way we remember the war speaks volumes about the values we embrace now.

The Met’s show brings together a rich variety of objects and images, from paintings and photographs to drawings, postcards, maps, magazines, satirical cartoons, blueprints, propaganda posters, victory medals, and even a set of savage-looking medieval-style armored helmets. The art historian David Lubin argues in Grand Illusions: American Art and the First World War that “never previously in the history of warfare had visual images been employed so effectively and abundantly” as by the nations waging World War I.3 In keeping with Lubin’s point (his book is conveniently for sale just outside the exhibit), the wide range of artworks assembled at the Met creates an immersive experience of the visual environments that surrounded soldiers and civilians, shaping their actions and beliefs, from the start of the war in 1914 through its long artistic aftermath in the modernist art of the 1920s.

The show’s layout gives it much of its power. Three main rooms, arranged in a semicircle, follow a chronological pattern: the beginning of the war, the terror of the trenches, the aftermath. A fourth tiny central room deals with the role of art in the war. The rooms can be browsed chronologically, which yields an informative history of the conflict and a steadily mounting sense of dread as the biggest battles draw nearer. But the rooms are also positioned in such a way that they can be browsed out of order, crossing between different times, so that the visitor confronts images of ruined bodies before coming upon the propaganda posters that first motivated those soldiers to fight. It’s a brilliant and unsettling bit of curation, a technique of montage just as effective in conveying the disorientation and trauma of total war as the fragmentary narratives of modernist masterpieces like Mrs. Dalloway. 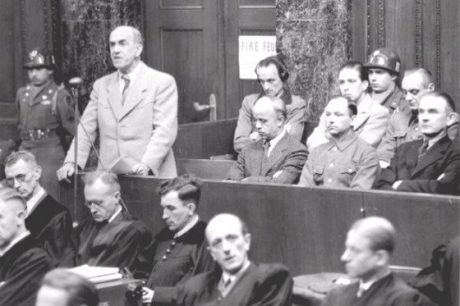 The first room starts with sketches of soldiers marching off to war. Théophile Steinlen’s 1915 print “Mobilization” is triumphant, as French troops parade through Paris under the outspread wings of Liberty, while John Copley’s 1915 lithograph “Recruits” depicts somber British men in hats staring dutifully ahead at a recruiting station. The avant-garde artist Natalia Goncharova makes war holy in her 1914 lithographs “Mystical Images of War,” in which Cubist-style angels guard a mass of Russian conscripts and hurl boulders down on the roofs of a little town. All three artists invest the war with national or even cosmic significance, absorbing individual soldiers into a meaning that far transcends themselves.

Like Goncharova’s angelic aerial bombardiers, many artists used Cubism to portray the inhuman speed and overwhelming power of new military technologies. The Italian Futurist Gino Severini’s 1915 charcoal drawing “Train in the City,” for example, is broken up into angular planes of smoke and steel (trains helped cause the war: the precise rail schedules required to mobilize an entire army forced France and Germany to launch preemptive attacks4). Cubism also helped militaries wage war. The British Vorticist Edward Wadsworth painted dizzying geometric designs onto British and American vessels, dubbed “dazzle ships,” to camouflage them from German U-boats; the Met has two cuts Wadsworth made of his dazzle ships in 1919. Most recognizably, though, the sharp spikes of Cubist aesthetics were used to represent the barrels of big guns, as on the cover of the July 1915 issue of the little magazine Blast, drawn by Wyndham Lewis, who was an artillery officer at Ypres. Between such cannons, U-boats, machine guns, and poison gas, an unprecedented 18 million people would be killed by the end of the war. 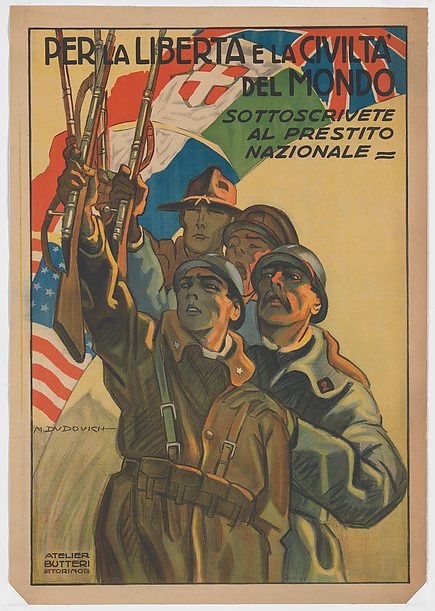 Marcello Dudovich, For the Freedom and Civilization of the World, Support the National Loan (ca. 1917). Color lithograph. The Metropolitan Museum of Art, New York

The second room of the Met’s exhibit turns directly to this mass slaughter. Image after image, wrapping around the room, wrestles with the reality of total war. Photographs show stretches of barbed wire in a desolate landscape, or men in helmets in their trench in a line extending to the horizon, waiting to charge. A 1918 satirical cartoon by the Dadaist George Grosz portrays a German doctor approving a decaying skeleton to join the army. C. R. W. Nevinson’s poignant 1918 lithograph “The Road from Arras to Bapaume” depicts a forlorn road running through empty fields, with miniature soldiers limping down it during the Battle of the Somme. Gone is the air of a higher purpose from the artworks early in the war, replaced by the isolated and broken figures of individuals ravaged by bullets, shells, and shell shock.

We see with our own eyes how these artists felt compelled to dredge up and make sense of their experience of the war by showing what it looked like, as if only by seeing the violence again could they move beyond it. Freud, after the war, called this a “repetition compulsion,” the need to relive traumatic events.5 As Otto Dix put it, “I wanted to get it out of my system!” “I dreamt continually about rubble and ruins,” he explained. “Not that painting provided any sort of release.”6

Dix’s nightmarish visions can be seen in the third room of the exhibit, which features etchings from his 1924 book The War, published shortly after The Trench debuted in Cologne. The etchings recall the terror of life at the front: bodies tangled in barbed wire, gas-masked soldiers clutching grenades in hands that look like claws, dead horses rotting on the ground, masses of worms writhing through skulls. The War ranks with Francisco Goya’s The Disasters of War as a preeminent artistic testament to the visceral horrors of combat.

The other images in the third room work to grieve for the dead and to indict the war. Max Beckmann’s 1919 lithograph “The Way Home,” for example, from his series Hell, shows the artist, in a leering self-portrait, clutching the stump of a veteran’s amputated arm to guide him home through the streets at night. Other wounded men on crutches crowd the background, while a hungry-looking dog wolf-grins in front. Käthe Kollwitz’s 1919 lithograph “Mothers,” in contrast, from her series War, contemplates more quietly the civilian costs of the war. A group of women wrap their arms tightly around their children. Their eyes gaze out in accusation and pain. Their bodies fuse into a solid mass of mourning. Kollwitz may have been thinking of her own son, Peter, who died in combat at 18. 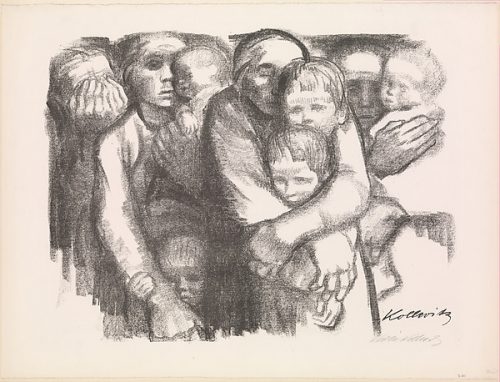 Many of these artworks made after the war were meant to keep its memory alive in order to prevent another one. In that they were unsuccessful: if anything, the industrial slaughter of World War II surpassed its predecessor. But these artists’ images of the Great War and the scars it left on soldiers and civilians alike remind us powerfully of the technologies of death the war invented and the suffering they brought.

As a record of historical violence, the final small room at the heart of the exhibit may be the most harrowing. A gas mask hangs in one corner, its fabric straps slowly fraying, its air canister covered in rust. Across the room, a large case holds a series of heavy steel helmets, also rusting, that were made in 1917 by the Met’s armor curator as prototypes for the US Army. They look like the body armor of storm troopers from a dystopian future in which the world has become medieval again. After all the two-dimensional images in the rest of the show, all the artistically crafted visions of the war, it is shocking to confront the brute physicality of these objects, with their weathered surfaces, the concrete thereness of items made to save men’s bodies from being torn apart. More than anything else, it makes the war feel real.

The Met’s “World War I and the Visual Arts” is a brilliant and unsettling bit of curation.

During World War I and the two decades after, states and their citizens often refused to look at the real suffering the war had wrought. They preferred a fantasy of heroism, an illusion so strong that artists like Beckmann and Grosz were exiled for trying to puncture it. The images of violence on view at the Met refuse to let visitors similarly look away from the carnage of the war a century ago. That matters, because the way we remember the war speaks volumes about the values we embrace now. World War I in many ways gave birth to modern America—it brought the United States onto the global stage and inaugurated the American security state at home and abroad. Contemporary security measures, from drone strikes and foreign interventions to domestic surveillance and immigration bans, have their analogues and precursors in 1917.

Both then and now, we ought to ask after the morality and efficacy of these uses of force: what actually makes democracy safer? And by contemplating the potent forms of amnesia that let people in the 1920s and 30s forget the pain that artists like Kollwitz and Nevinson tried to capture, we should feel compelled to ask what forms of anesthesia keep us from paying attention to the people dying in our wars today—and what kinds of art might help us remember. 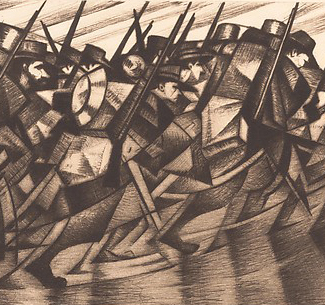 World War I and the Visual Arts