The Big Picture: Trump, Trade, and War
President Trump has proven to be a reckless leader. His refusal to denounce white supremacists, his repeated attacks on journalists and free speech, his courting of Vladimir Putin, his attempts to ... 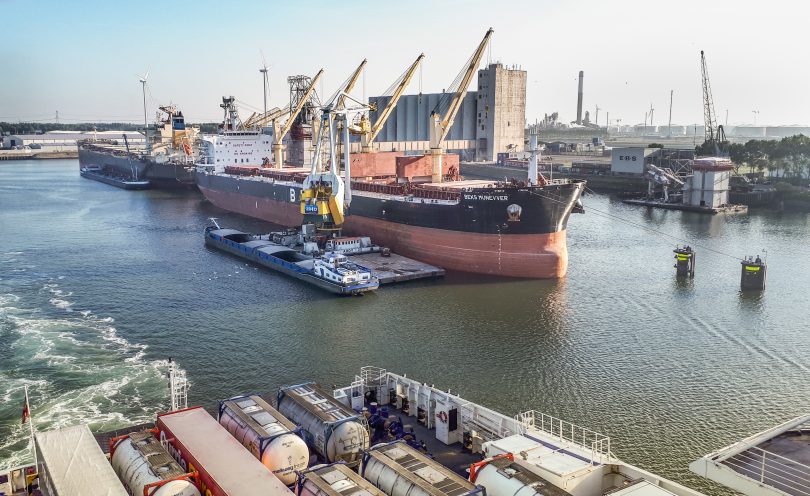 President Trump has proven to be a reckless leader. His refusal to denounce white supremacists, his repeated attacks on journalists and free speech, his courting of Vladimir Putin, his attempts to belittle and provoke the North Korean leader—every single one of these acts is corrosive and destabilizing. While the media has understandably focused on the risks of authoritarianism and nuclear war, there is another grave danger that has largely gone unnoticed: President Trump’s rejection of free trade.

It may take years before historians fully understand why President Trump won the election. But already we know that his message resonated with an electorate that had suffered from economic dislocation and growing inequality and that was tired of what has been called a “forever war.” Trump promised a new America, an America that put itself (or at least certain parts of itself) first. To the candidate and his electorate, our 70 years of global order were, at best, outdated. As his campaign progressed, Trump began hawking an international agenda built on two pillars: protectionism and isolationism. In a nod to the isolationists and pro-Fascists of 1930s America, he even began referring to this agenda as “America First.”

During the 2016 campaign, Donald Trump attacked free trade, promising to erect tariffs and barriers to keep manufacturing and jobs at home, to withdraw from negotiations over the Trans-Pacific Partnership, to renegotiate NAFTA, and to punish China for devaluing its currency.

Trump’s critics pointed out many problems with his protectionist positions: protectionism is economically inefficient; it is an assault on the post–World War Two American conception of freedom and liberty; it is a futile fight against globalization—a stance that has been proven, time and again, to be on the wrong side of history. Trump’s isolationism is a retreat from America’s role in world affairs and will lead to global instability; a declaration of defeat in the global war on terror; and an abdication of America’s decades-long policy of spreading democracy and protecting human rights.

But the critics missed the biggest problem with Trump’s embrace of protectionism: trade today plays the role in the world order that war once played. Trade gives states a way to influence one another without resorting to force, as was once common. Giving up on trade means giving up on that influence, leaving states with little choice but war.

“America First” threatens to put America last, at least on the international stage.

To understand why this is the case, one has to return to what we have described as the “Old World Order.” For hundreds of years, waging war was considered a necessary function to run a state. As described and systematized by the so-called “father of international law,” Hugo Grotius, in the early 17th century, international law permitted states to use force in order to right (perceived or otherwise) wrongs. Actually, it did more than permit war. The system relied on war as a tool of international justice. It was the way in which states collected unpaid debts, obtained compensation for wrongful harms, enforced treaty obligations, and protected religious interests, among much else.

In this world, war to enforce legal rights was perfectly legal but economic sanctions by neutrals against belligerents were illegal. Neutrals had a duty of impartiality in a conflict—states outside of a conflict could not offer more favorable trade terms to the state it favored. To do so was illegal, and would give the disfavored state a cause for war.

As we argue in our recent book, The Internationalists: How a Radical Plan to Outlaw War Remade the World, that all changed in 1928. Over 60 countries ratified the Kellogg-Briand Pact (also known as the Peace Pact). By outlawing war, the Peace Pact changed the role of war in the international system. War could no longer legally be used between states to resolve disputes, to right wrongs, or to force uncooperative states to cooperate.

The Pact did not work overnight, of course. As we show in the book, it took decades to figure out how to make the promise of the Pact a reality. One of the crucial moments came shortly after it entered into force: in 1931, Japan, which was a party to the agreement, committed a clear violation by invading Manchuria. The world was unsure how to respond: surely it could not enforce the prohibition on war with war. But if not war, then what?

The answer came when US Secretary of State Henry Stimson wrote to Japan and China on January 8, 1932: “The American Government … does not intend to recognize any situation, treaty, or agreement which may be brought about by means contrary to the covenants and obligations of the Pact of Paris”—another name for the Kellogg-Briand Pact. The League of Nations quickly followed suit. The doctrine of nonrecognition would become known as the “Stimson Doctrine” and would give rise to a new way to enforce the law: not with war, but with so-called “sanctions of peace.” As Stimson explained in a speech entitled “The Pact of Paris: Three Year Later,” the Pact had set in motion a change in the laws of neutrality, which for the first time permitted states to put in place economic sanctions against parties to a war, using trade, not force, as a way to enforce the law.

Economic sanctions thus slowly began to fill the void left by the decision to outlaw war. They became one of the most powerful weapons a country could wield. By placing sanctions on uncooperative nations, the international community could effect change without violence. States could no longer use war to enforce the law, but they could use sanctions to “outcast” misbehaving states. 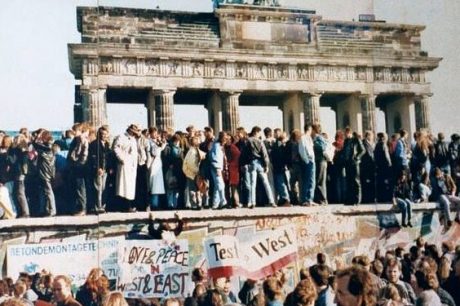 To see how sanctions can be used as a substitute for war, consider the events that led to the Iran nuclear deal. In 2006, the UN Security Council joined the United States in economically isolating Iran. It demanded that Iran stop uranium enrichment and imposed progressively more painful trade sanctions in response to its continued intransigence. As a result, Iran was shut out of global commerce not only by the United States and a few sympathetic countries but by nearly every nation in the world.

The sanctions regime was further tightened in 2010 by an obscure office in the US Treasury Department: the Office of Foreign Asset Control, or OFAC. At the behest of OFAC, Congress passed the Comprehensive Iran Sanctions, Accountability, and Divestment Act, which strengthened US sanctions on the Iranian energy industry and financial sector. Whereas previous measures had targeted only Iranian firms, Congress now authorized the imposition of “secondary sanctions” on any bank, anywhere in the world, that transacted with Iran’s central bank. Any bank placed on the blacklist could be cut off from access to the US financial sector. The United States offered banks a choice: you can do business with the United States or you can do business with Iran; you can’t do both.

These sanctions worked remarkably well: Iran’s oil exports fell by more than 50 percent, the value of the nation’s currency (the rial) plummeted, and in 2012, Iran’s economy shrunk by about 7 percent, prompting Iranian President Mahmoud Ahmadinejad to complain: “The enemy has announced that it has imposed sanctions …This is a hidden war. A broad and heavy war, spread across the globe.”

Ahmadinejad’s statement was evidence that the sanctions were imposing costs. But as David Cohen, the Treasury official who oversaw OFAC, pointed out, the sanctions were not a secret war. They were instead “done for all the world to see” and, indeed, “done by all the world.” Nor were they actually a war, Cohen continued, but “the alternative to war.” And that alternative worked.

In August 2013, Hassan Rouhani succeeded President Ahmadinejad, after running on a platform of improving relations with the rest of the world and sanctions relief. The new Iranian leadership began negotiations with the “P5 plus one”—the permanent five members of the Security Council plus Germany, the economic steward of the EU. In November 2013, they reached an interim agreement limiting Iran’s nuclear program and partially lifting sanctions and made plans to complete a more permanent, comprehensive agreement. For the first time in decades, there was real hope that a nuclear Iran could be prevented through discussions at the negotiating table rather than with military strikes.

Now President Trump, by calling into question the United States’ commitment to free trade and global economic integration, is threatening to unilaterally disarm. The less business it does with the rest of the world, the less influence it will have in the modern legal order. Raising trade barriers, and withdrawing from free trade agreements, means giving up power and influence.

Trade today plays the role in the world order that war once played.

The President’s twin messages of isolationism and protectionism are dangerous. If the US pulls back from unilateral trade and cooperation, it will be left with fewer diplomatic options. States that outcast themselves find it difficult to outcast other nations. What’s more, giving up the capacity to influence states through trade can cause states to look longingly at the Old World Order tool of influence: war.

North Korea is an excellent example of a country caught in this trap. It is so isolated from the global economy that it has little influence over other states other than the threat of military force. Its capacity to exert influence outside its borders depends entirely on its nuclear weapons program; it has nothing else.

Indeed, even as Trump has been threatening to withdraw from free trade arrangements, he has been relying more heavily on the military to get what he wants. He has doubled-down on virtually every American military engagement. He has sent US troops into Syria to assist the fight against ISIS. He has stepped up support for the Saudi-led fight in Yemen, even in the face of reported war crimes. He has fired missiles in retaliation for Syrian chemical weapons attacks.

In September, Trump announced that he is sending more US troops into Afghanistan. He has loosened the rules of engagement in Afghanistan as well. He has even suggested that he might use the US military in Venezuela. In front of the United Nations, the home of peaceful cooperation, he threatened to “totally destroy” North Korea, implying his willingness to use weapons against millions of civilians. And, most recently, Trump has refused to certify part of the Iran nuclear deal, raising the specter that the deal will break down and Trump will ultimately resort to military force against Iran.

The lesson Trump has yet to learn is that in the modern era trade is more than trade. Trade is the power to exert peaceful and effective influence abroad. Giving up on trade means walking away from that influence. “America First” threatens to put America last, at least on the international stage.

Trump’s lasting legacy may be even more destabilizing than the most dire predictions issued at the start of his presidency. By pulling back American support for free trade, Trump threatens America’s nearly century-long run of being the “indispensable nation.” Even after he leaves office, that lesson will linger. For decades, the US dollar has been the foundation of the world’s economy, countries have freely lent to the United States, and English has been the dominant language on the international stage. If the United States relinquishes its leadership role, we should wonder: who will fill the void we leave behind? 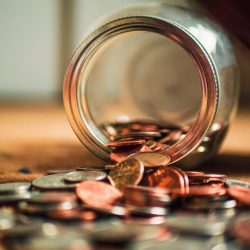