The Book That Made Me: A Sociologist
A renowned American sociologist reflects on the book that persuaded him to abandon a career playing bar piano in Chicago ...

The Book That Made Me is a series about the books that have changed our lives. In this latest installment, a renowned American sociologist reflects on how a book helped him abandon (reluctantly) a career playing bar piano in Chicago.

I graduated from the University of Chicago with a bachelor’s degree in 1946, at the age of 18 (how I did that is for another time). I was still living with my parents, even though I had begun to make an adult living playing piano in bars around Chicago and, occasionally, with big bands. But I knew that if I didn’t continue school my father would have a fit and I might have to move out. I wasn’t ready to do that and knew that the solution was to start graduate work.

But in what field? I first thought of English literature, because I liked reading novels. Not a very good reason. But then I happened to hear a presentation at the Parkway Community House, a black institution not far from the university, by Horace Cayton and St. Clair Drake, who talked about their new book Black Metropolis, which exploited a massive research project paid for by the WPA and other New Deal make-work programs. I got the book, read it, and fell in love with its picture of what you could call “urban anthropology,” all the thrills of studying the exotic without having to go farther than the Chicago streetcars and buses could take you. You could sleep in your own bed and eat food you were used to, without the privations the real “field” anthropologists had to endure. I learned too that some people called this kind of anthropology “sociology,” and the university had a good department of that. So I applied to and was accepted by the sociology department. In that post–World War II era, standards were less rigorous.

The author as a young man, before Black Metropolis led him away from bar piano. Photograph courtesy of the author

I knew something of life in Bronzeville, the neighborhood at the center of Black Metropolis. Piano jobs took me there often enough that I felt at ease on the streets and in the clubs. I saw the “policy slips”—lists of winning numbers in the daily illegal lottery that littered the streets—as well as parades of well-dressed people out for an evening on the town. I’d even played for a black debutantes’ ball, a feature of that community’s life few of my fellow students knew existed. Looking into details like that seemed like a fun way to continue school and keep my father off my back. And Cayton, but more so Drake, seemed like the kind of people I wouldn’t mind being one of.

Some details of their analysis struck me as particularly cool. Not only did they describe the class system of Bronzeville in meticulous detail, but they portrayed in the same way the split in the community between the “respectable people” and the “shadies.” This was played out at every class level: between the upper-class entrepreneurs who owned the cosmetics companies and the Chicago Defender, the nationally known community newspaper, and the equally well-to-do men who ran the policy game; between the middle-class professionals and shopkeepers and the equally middle-class owners of bars and liquor stores; down to the very poor churchgoers but also the equally poor people who drank and whored and gambled. A social science that recognized such divisions—which working in bars and strip joints as a pianist had convinced me could be found everywhere—looked like something I wanted to do.

The next five years convinced me I’d made a lucky guess, was on to a good thing, and eventually let me make music my second, rather than my primary, occupation. 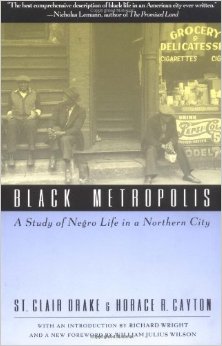 Black Metropolis: A Study of Negro Life in a Northern City