The Church House on Cannaday School Road: Floyd, VA
This is the latest installment of Public Streets, a biweekly urban observations series curated by Ellis Avery. Floyd, VA, sits at the intersection of State Highway 221 and Route 8, in the southwest ... 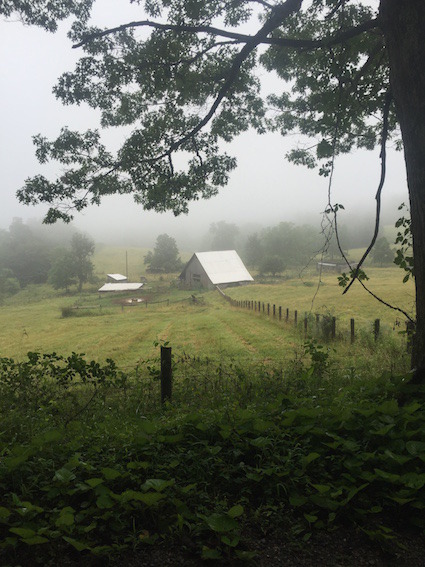 Floyd, VA, sits at the intersection of State Highway 221 and Route 8, in the southwest point of the state. The sole stoplight in Floyd County guards that intersection, watching over the courthouse, an unadorned 20th-century clump of brick boxes with two modest granite war memorials on the lawn in front and a big parking lot in back that it shares with the Bank of Floyd.

Across the street from the courthouse stands a row of brick storefronts. One bears a faded sign for Rutrough’s Sundries, a pharmacy and soda fountain that closed in the ’80s. The latest tenant is a clothing boutique, selling shapeless but colorful cropped pants and long tunics. Next door sits the Blue Ridge Restaurant, which has served the same breakfast (biscuits, gravy, eggs, sausage, pancakes) and lunch (sandwiches, burgers, green beans, macaroni salad) to generations of Floyd families. On the other side of the boutique, the Farmer’s Supply sells a “demitasse set” and “tea bag squeezer” in addition to nails and fasteners in bulk. 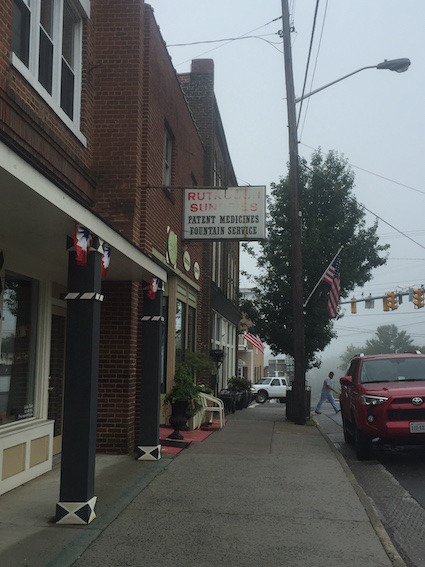 The Blue Ridge is part of the oldest mountain range on earth. Its white granite rocks poke out of the red earth of the meadows and riverbanks. Its low peaks are worn soft, rounded on top, covered with a dense growth of maple, oak, hickory, white pine, and, once upon a time, chestnut. The trees in Floyd are young, as trees go. Their predecessors were cut down to build fences, barns, chicken coops, granaries, log cabins, farm houses, and dozens of little white-painted churches—Methodist, Brethren, Baptist, and Presbyterian. The logged hillsides have regrown and filled in over a century or two, some to be cut again.

Northeast of town, halfway to the almost-town of Check, one of the gravel roads off of 221 is Cannaday School Road. It takes its name from a three-story white clapboard cube with a hipped roof set back among the trees, looking out over a boxwood hedge. Built in 1913 as a Presbyterian mission school, the Harris-Cannaday building served as both a church and boarding school for the isolated families living near the Franklin Pike. In the 1930s a girl named Harriet Shank started a high school there. By then few Harris-Cannaday students lived in the small sloping attic rooms, but rather came, like Harriet, from the families in the neighborhood. This side of Floyd County borders Franklin County, and at that time the families living on the Franklin Pike brushed up against the moonshiners and bootleggers of Franklin. In fact, on the date that Harriet was set to marry a man from the Pike, the wedding was delayed because bootleggers made off with his truck. But Harriet married Alvie Allen just the same.

Northeast Floyd County in the first half of the 20th century was not so very different than it was in the 19th. Most farms had neither electricity nor indoor plumbing. Families milked their cows by hand, heated with wood stoves, went to bed with flatirons wrapped in flannel in the winter, and bathed in the kitchen on Saturday night. When the United States entered World War II, two of Alvie’s brothers as well as Harriet’s put on uniforms. Alvie left Harriet with their young children to work in the powder factory, and later in the shipyards far off on the coast.

When their first little cabin on Franklin Pike burned down during the war, Harriet and Alvie bought the farm across the road from Cannaday School. Harris-Cannaday was now only a church and Harriet and Alvie’s five children attended every Sunday. During the week they rode the school bus to Check after milking the cows before dawn. In the 1950s and ’60s the five younger Allens left one by one to attend the Methodist junior college in Franklin County before going farther afield. One became a missionary and married a Chinese man; another joined the Navy, married his high school sweetheart, and raised his children down the mountain in Salem.

Alvie and Harriet lost their home to fire a second time in the late 1960s, so they bought the Harris-Cannaday building, no longer used as a church, and lived in the building where Harriet went to high school and their children went to Sunday school. After Alvie died, his youngest son ran an experimental farm on the family land in the late ’70s and early ’80s. Once again the sloping bedrooms on the third floor of the church house were filled, this time by hippie aspiring farmers. By the time the 20th century rolled over into the 21st, hobby farms raising lavender and fainting goats began replacing Floyd’s family dairy farms.

State Highway 221 is still one lane in each direction, swooping in lazy curves past empty concrete silage pits and fenced pastures. The Blue Ridge really is blue, like a smudged wave on the horizon. Alvie and Harriet Allen’s sons, both now retired, live on separate plots of the farm where they grew up. Apple trees, both old and new, grow in the fields. When it rains, the gravel roads run brick-red down the hills.