The Corner Office
This is a new installment of Public Streets, a biweekly urban observations series curated by Ellis Avery. At the corner of 60th and Madison, high-end retail logos create an upscale fantasia: DKNY ...

At the corner of 60th and Madison, high-end retail logos create an upscale fantasia: DKNY, Calvin Klein, and Bally. Byron Breeze, Jr., also known as “Soulja,” has made this corner the “office” where he does most of his deal-making, ranging from finding a new musician to represent to pulling together a speaking gig. On this particular spring day he’s dressed all in red—including a red sailor’s hat—topped with knock-off designer sunglasses. He’s been here since 6 a.m. and is ready for the weekday rush. Among the midtown thousands flooding by, some take a moment to stop and drop a dollar in a plastic sack dangling from the arm of Soulja’s bright red scooter. For those who know him, there’s an exchange of familiar morning banter. For those encountering him for the first time, there isn’t much talk. In a city where chatter is non-stop, Soulja can leave a passerby speechless: this handsome, charismatic man was born without legs and only thumbs on his hands.

Soulja chose this corner with care. With the help of friends, he determined that this location, home to well-to-do residents and deluxe boutiques, could help him afford to live in the city. “Going to the office” supplements Soulja’s meager disability payments and also gives him the connections and funds to help with his music and media efforts. Like any businessman, he likes to diversify: if one project doesn’t work out, there is always another. Today he is texting and calling other motivational speakers to be on his panel at a Maryland high school. Tomorrow he might be working with former detective Joe Labella on “1 Street at a Time,” their mentorship program for at-risk youth. On still other days, he’s promoting his hip-hop group, The Urban Casualties. 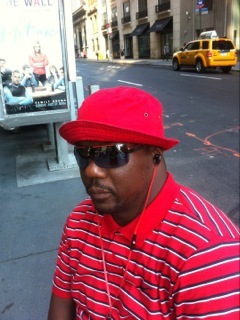 The Casualties—Soulja, P-Funk, Wild Child, and Cookie Monsta’—all met in a home for the disabled in Maryland in 1995, when all but Soulja found themselves newly facing the harsh realities of life in a wheelchair. They bonded over their music and their struggles: P-Funk had been disabled in a car accident, Wild Child stabbed in a club for dancing with the wrong girl, Cookie shot on a basketball court for the gold chain around his neck.

Soulja has been the driving force behind the Casualties, but physical and financial challenges nearly prevented the group from getting together to record their music. First, Wild Child had to undergo treatment for cancer, then Cookie had a series of amputations due to circulatory problems. In the meantime, Soulja faced constant trials with his apartment in the South Bronx—filth, vermin infestations, faulty plumbing, drug dealing on the front stoop. He withheld payment, but the city, which had taken over the building, eventually forced him out, and he ended up sleeping in his van for a couple of months. When his van was towed for dozens of parking violations, Soulja was back to square one, saving for a new car and sleeping on friends’ sofas. 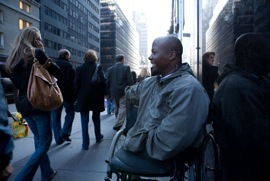 Burnt out by years of trying to bring the Casualties together to record, and grief-stricken over the loss of his sister to cancer, Soulja went on a soul-searching journey. A “corner office” connection sponsored him to attend an “Unleash the Power” seminar in Georgia by motivational speaker Tony Robins, where Soulja received both funding and a promise from Robbins to introduce him to music producer Quincy Jones. There, Soulja also met businessman Steve Drewes and later his friend Susie Stark Christianson, a Marine. With Drewes’s mentorship and Christianson’s training, Soulja competed in the New York City Triathlon and became the first double amputee (categorized thus even though he was born without complete limbs) to cross the finish line. 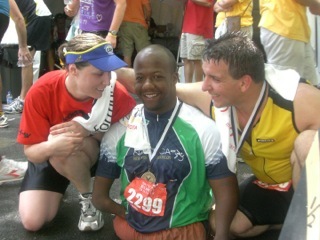 Now armed with funding, connections, and the post-triathlon sense that he could do anything, Soulja decided to bring the Urban Casualties together and make their recording dream come true. The logistics were complicated, since he’d have to bring Wild and Cookie and their wheelchairs up to New York from Washington, DC in a van large enough to accommodate them. They would also need a wheelchair accessible place to stay, and since the subway has relatively few accessible stations, they would have to take cabs, although cabdrivers hesitate to stop for a disabled person, much less two disabled people and their wheelchairs. P-Funk’s building is accessible, so they were able to work there, generating and rehearsing material to lay over his beats. Finally, it all came together with sound engineer Tom Spahn and a professional recording studio, where the Casualties recorded their high-energy tracks—from “Rollin’ Rollin,’” about life in a wheelchair, to “Do the Hustle,” which celebrates the grit required to make it on the streets.

With music in hand, Soulja is now gunning for that promised meeting with Quincy Jones, all the while focused on motivational speaking, or as he refers to it, “Motivation in Motion.” On the corner, in between chatting with his regular supporters, Soulja makes another phone call to confirm that his Baltimore speaking engagement is on track. “A Soulja’s work is never done,” he says.

Soulja’s journey over the past 10 years has been documented by journalist and filmmaker Kathleen Kiley, director of the documentary film in post-production, Half a Soulja, produced by Barbara Bryce Morris, along with Michael Patrick Kelly.
www.halfasoulja.com