The Dress Has Always Been News
As “the dress” befuddled the Internet’s hive mind, our newsfeeds swelled. Tumblr and Buzzfeed, recognizing the viral power of a garment that appears gold and white to some but blue and black to ... 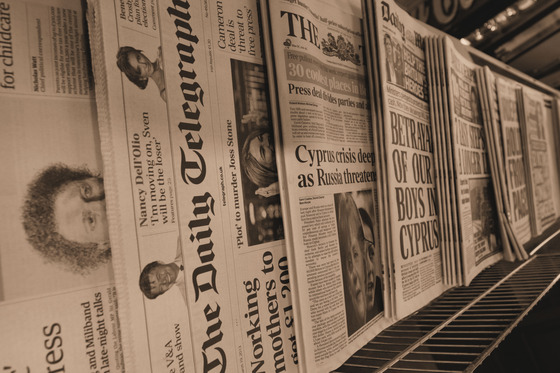 As “the dress” befuddled the Internet’s hive mind, our newsfeeds swelled. Tumblr and Buzzfeed, recognizing the viral power of a garment that appears gold and white to some but blue and black to others, got the freight train rolling. Soon, bastions of journalism such as the New York Times and Washington Post hopped on board. Experts in cognition assured us that reality is not as fickle as a dress that inexplicably switches colors, but they could not answer a lingering question: is this news? The hive was unhinged by an unholy mix of poor lighting, poor photography, and cognitive correction, yet the existential status of news presents a much more enduring puzzle, one that’s at the heart of Andrew Pettegree’s The Invention of News.

It is, after all, difficult to conceive of news as an “invention.” Do written messages exchanged every three years by Welsh monasteries in the 11th century qualify as “news”? How did we go from that to the news as we now know it, broadcast across the globe and in cycles measured in milliseconds? Pettegree, a professor of modern history at the University of St. Andrews, in Scotland, finds answers by linking the emergence of news as a mass commodity to Western Europe’s development of communications networks between the 15th and 18th centuries. This network perspective decenters news as a singular object. Instead, what we get is a richly detailed history that shows the invention of news as a messy cultural process, with abrupt turns and setbacks. Major advances in information networks were quickly followed by retreats. Printers would reinvent news, only to fold a year or two later. When newspapers first appeared, a mass readership had to learn how to read brief accounts that provided much less context than the narrative histories with which they were familiar. Pettegree’s history of news suggests that crisis has shadowed journalism from the start.

The Invention of News divides the earliest stirrings of modern news into three epochs, starting with the 15th and early 16th centuries, when the printing press spurred the transition from largely private news networks to the earliest forms of public news industries. Next, in the 16th and early 17th centuries, improved communications networks enabled the news to spread faster and to more people at less cost. Finally, in the 17th and 18th centuries, advertising expanded circulations, and Enlightenment ideals brought an empirical approach to news that led it to shed moral overtones.

Pettegree’s book stands alongside other cultural histories of news, such as Michael Schudson’s 1978 Discovering the News, or Kevin Barnhurst and John Nerone’s 2001 The Form of News. Where these previous treatments foregrounded the practices and presentation of news in US history, The Invention of News is an internationally distributed affair. Though there are many prototypes cited here, including Johann Carolus’s production of the first newspaper in 1605, news has no moment or location of origin. Instead, the production of news is deeply woven into the complex fabric of life, and The Invention of News is filled with fascinating details about everyday Europeans. We read 13th-century letters exchanged via Oxford University’s postal service, in which students invoke the “promptings of divine pity” to plead for money from their parents, and parents berate their children for “strumming a guitar while others are at their studies.” We find a 15th-century Italian merchant, distrustful of the written word, imploring his partner to “Put Domenico on horseback and send him quickly by land, giving me news of what you have done.” We encounter as well the awful power of “news” to whip up mass frenzies, such as accounts of witches flying to the devil’s summon that would contribute to atrocities in the 16th and 17th centuries.

The details also underscore surprising continuities in the invention of news. Harried reporters today might see a kindred spirit in 17th-century news writer Thomas Gainsford, who wrote: “Gentle readers, how comes it then to pass that nothing can please you? If we afford you plain stuff, you complain … it is nonsense; if we add some [embellishment], then you are curious to examine the method and coherence, and are forward in saying the sentences are not well adapted.” Much like reporters today, Gainsford published in a multimedia environment. His printed reports on the Thirty Years War sought their niche in an age when news was also passed face-to-face in the market square, or conveyed in song, or referenced by actors on stage. Playwright Ben Jonson implicitly referenced this 17th-century “news diet” when, in his play A Staple of News, he lampooned a countrywoman seeking to purchase “any news, a groat’s worth” as she would any other staple item. Here Pettegree points out that the theater was itself a form of news, with many plays depicting current events, and that Jonson, like many playwrights, likely would have seen the mass dissemination of printed news as a threat to his livelihood.

As mentioned above, consumers of news pamphlets and broadsheets also had to learn how to read these new forms. The earliest newspapers contained brief accounts that were simply stamped with dates and locations, without headlines or context. This generally followed the format of correspondence in long-established private networks, such as an Italian writer’s unelaborated dispatch from 1478: “I have news from Genoa that the Doge has knighted Batistino and sent away Adorni and Raonesi.” Such correspondence might easily be understood when circulated among wealthy insiders who knew the context and the stakes. But moving into wider public dissemination, it called upon those accustomed to narrative-style manuscripts to adapt their reading habits if they were to stay current with events of the day.

The Invention of News is a catchy headline. Read past the fold, however, and you’ll find an engaging cultural history, one with great relevance to the information networks we’re building today—and the color-switching dresses that threaten to break them.

The Invention of News: How the World Came to Know About Itself