The Inventor of Nature
In 1869 the centennial of Alexander von Humboldt’s birth was celebrated around the world, including in New York City, where bands and speakers gathered in Central Park to honor his legacy. He was ... 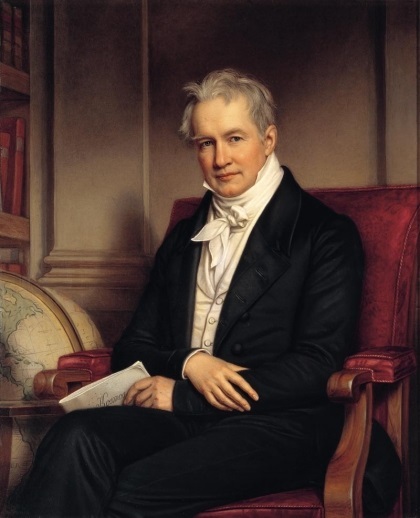 In 1869 the centennial of Alexander von Humboldt’s birth was celebrated around the world, including in New York City, where bands and speakers gathered in Central Park to honor his legacy. He was hailed as the most brilliant explorer since Alexander the Great, a scientist equal in stature to Charles Darwin, and a genius who alerted the world to how humanity was destroying the environment. In the century and a half since, Humboldt’s star has dimmed, especially in the English-speaking world. In our era of climate change, when international science and the institutions of global governance present the only hope for addressing the crisis, Humboldt’s scientific and prophetic legacy deserves revival and reevaluation.

Andrea Wulf’s masterful The Invention of Nature: Alexander von Humboldt’s New World represents the best of the handful of English-language books that have appeared in the last decade focused on Humboldt and his science. Gerard Helferich’s Humboldt’s Cosmos and Aaron Sachs’s The Humboldt Current brought the explorer back into the light, but Wulf’s superb biography reaches beyond Humboldt’s remarkable life to encompass his adventures as the first ecological internationalist.

Humboldt read the fearful writing on the walls of ancient mountains and riverbeds. Returning to Europe from his “great voyage” in 1804, he broadcast warnings through his network of cosmopolitan friendships at the same time that he published the work that would influence the development of biology and geology in the 19th century. A prophet without a church, a pioneering ecologist, he urged us to understand and to preserve Nature.

Wulf narrates Humboldt’s expedition across Latin America, where he crossed through territory that would later become Colombia, Ecuador, and Peru. He returned after five years with detailed charts and drawings. Charles Darwin, Wulf explains, credited Humboldt for his maps, which guided his expedition on the HMS Beagle.

As a scientist-explorer, Darwin stood on Humboldt’s shoulders, but the two approached their interests from opposite directions. Darwin looked backwards, seeking the origin and development of life. Humboldt looked ahead, detailing the world as he found it and foreseeing the intrinsic dangers of thoughtless exploitation.

In the 19th century, when his birthday was still an international holiday, poets, essayists, and conservationists all honored Humboldt’s memory. In separate chapters Wulf describes his impact on American contemporaries, including the Concord philosophers Thoreau and Emerson. The Scotsman John Muir, who spent his formative years in Wisconsin and Indiana, started out on foot in Humboldt’s steps towards South America until his health halted the pilgrimage. Muir turned instead toward California, where he devoted his life to preserving the majesty of the American West. In his copies of Humboldt’s Personal Narrative, Muir described Yosemite as a mirror reflecting the “Creator’s hand.” Unlike Humboldt, who never mentioned a Creator, Muir was deeply spiritual.

Humboldt’s youthful biography crosses as many boundaries. Wulf describes a childhood of paradoxes, epiphanies, and crises. Emotionally orphaned yet cosseted, the young well-connected aristocrat was befriended by Johann Wolfgang von Goethe. He studied science at Göttingen, then visited imperial London, where his wanderlust feasted on the sight of the cargo-laden ships from India and North America crowding the Thames. Wulf highlights the unquenchable curiosity that, combined with a truly astonishing memory, enabled him for almost 80 years of life to connect observations and experiences from different parts of the world obtained decades apart.

Humboldt began planning his “great voyage” at the age of 27, just as he became the heir to his mother’s great wealth. He waited out the French Revolution in Paris, and there, in 1798, he met the botanist Aimé Bonpland. Bonpland was a like-minded enthusiast, but had a phlegmatic temperament in sharp contrast to the high-strung Humboldt. Both equally eager to explore the tropics, they planned their grand expedition. A year later the two men received passports from the King of Spain, permitting them to visit his Latin American colonies—explicitly the Peruvian Andes and the equator in Ecuador.

Humboldt and Bonpland sailed from Madrid. Humboldt was 32 years old and near Caracas when he looked into the night sky and saw the Southern Cross. He had arrived at his destination. With him he carried a carefully crafted “tool chest” that included a barometer, thermometer, sextant, and “cyanometer,” a gadget he had invented to calibrate the blueness of the sky by matching the color to his blue glass as a way to determine the height of the mountains he intended to climb. Mount Chimborazo in the Peruvian Andes was his particular quarry, its height estimated at 21,000 feet.

They left Caracas with local porters and guides. When those men abandoned him at the snow line, he and Bonpland ascended alone, crawling along the narrowest ridges to compare this alpine landscape with Europe’s. He mapped as they moved, noting in passing the extraordinary parallels between the mountain landscapes, half a world apart. In Peru he crossed the magnetic equator, watching the needle on his compass turn from north to south, and some 500 miles south of that he found the geographical equator.

Wulf captures Humboldt’s curiosity and impetuous zeal for discovery. To get to the Andes from Caracas they had to cross the Llanos, grasslands as broad as France that covered Venezuela and Columbia. Local guides had mentioned a pond of electric eels. Humboldt asked to be directed to them because he had experimented with animal electricity as a student and was eager to see it in nature.

On the plains, in temperatures upward of 120° F and dressed as he always did in loose trousers, waistcoat, and a soft white tie, he devised a way to examine the muddy-bottomed eels. Humboldt asked the locals to round up wild horses, and since the eels were too highly charged to touch, he directed the guides to drive them into the mud.

Wulf writes: “As the horses’ hooves churned up the mud, the eels wriggled up to the surface, giving off enormous electric shocks. Entranced, he [Humboldt] watched the gruesome spectacle; the horses screamed in pain, the eels thrashed beneath their bellies, and the water’s surface boiled with movement.” Later, believing the electricity had diminished, he tried to dissect the eels but still received violent shocks.

After five years out of touch with home, he detoured back to Europe via Washington, DC, where, in 1804, he delighted Thomas Jefferson with crucial information. During a week’s visit he provided James Madison and Albert Gallatin, his cabinet members, with information about how the Spanish governed their colonies. This was knowledge they had been unable to attain but sorely needed in light of the recent Louisiana Purchase. Gallatin described Humboldt’s speech as “twice as fast as anybody I know […] a fountain of knowledge which flows in copious streams.” Jefferson simply called him “the most scientific man of his age.”

Wulf leaves unresolved the question of why Humboldt disappeared from scientific memory in the English-speaking world.

Humboldt brought back from Peru a sketch of Mount Chimborazo divided into natural zones that he called Naturgemalde, showing vegetation as it changed with altitude. On his return in 1804 he showed these pictures to his delighted brother. In the future, students would see the natural world in this new perspective of zones according to altitude, not simply to geography.

He soon published them in his Personal Narrative, which, despite its great length and mathematical and scientific detail, became an instant “must-read” for future explorers. The Narrative was translated into many languages, including the English edition that Darwin brought to read and reread almost 30 years later aboard the HMS Beagle.

Wulf’s biography is far from traditional. Although she tells a reasonably linear narrative of one man’s ideas and theories, she does so through the details of scientific measurements, drawings, and the results of observations using his “cyanometer.” Humboldt had begun to document his travels as soon as he arrived in Caracas in 1799, and published the first volume of Voyage to the Equinoctial Regions of the New Continent in 1803. The Voyage expanded over 40 years to 34 volumes. He was still exploring in eastern Russia in 1827 when the impending war with the Ottomans halted his progress. That was his last official expedition, though he wrote until he died at the age of 89. Word of his death rippled slowly across the world. Unaware of the event, Darwin asked his publisher to send Humboldt the first six chapters of the Origin of Species.

Wulf leaves unresolved the question of why Humboldt disappeared from scientific memory in the English-speaking world, save for the many places and species that bear his name. It may well be that his name was banished with anti-German policies at the outbreak of war in 1914. Like the salvo leveled against the French and their frites at the beginning of the 21st century, The Great War’s linguistic home front in the United States rechristened sauerkraut “liberty cabbage” and struck the names of Germans from textbooks and general public education. Sauerkraut returned to the menu almost a century ago. It is well nigh time to honor Humboldt again, recognizing him as an early ecological internationalist and the inventor of Nature as we have come to know it.