The Laughing Animal
Karen Joy Fowler’s most recent novel is a glimmeringly dark and clever book about the possibility of mutual happiness between human and nonhuman animals. Like much contemporary fiction, We Are All ... 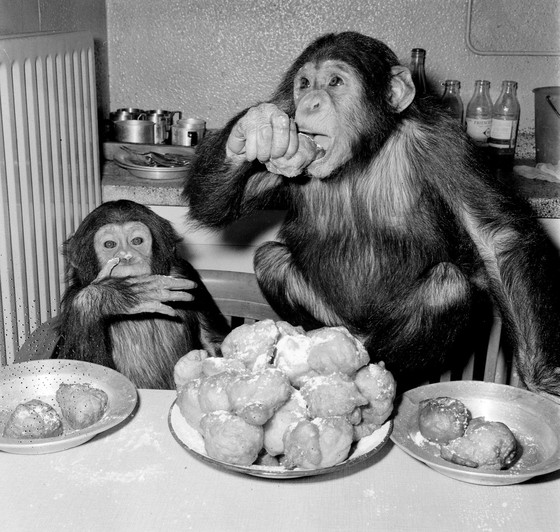 Karen Joy Fowler’s most recent novel is a glimmeringly dark and clever book about the possibility of mutual happiness between human and nonhuman animals. Like much contemporary fiction, We Are All Completely Beside Ourselves tells the story of an unconventional family in a mildly unconventional way. What makes Fowler one of our more significant funny novelists—and what makes this novel her funniest and most significant to date—is that laughter is brought forward as our best means of intellectual, psychological, and even ontological exploration. This novel offers all its characters outcomes that are ambiguous at best, tragic at worst. Nonetheless Fowler reminds us that comedy is often inextricable from our most open forms of thinking, feeling, and being: if we want seriously to trouble the boundaries between the human and the animal, we’re going to have to be able to laugh about it.

The novel’s first-person narrator, Rosemary, explains that she is one of three children belonging to the Cooke family. Her older brother, Lowell, is a teenage runaway and animal rights activist who is eventually hunted down and arrested for terrorism. Her sister, Fern, is the third Cooke sibling, and it is Rosemary and Fern, Fern and Rosemary, “the fabulous, the fascinating, the phantasmagorical Cooke sisters,” who form the novel’s beating heart. Bouncing back and forth between present and past, Rosemary narrates both their stories, as best as she can, from the moment Fern is ejected from the Cooke household to the moment the two meet again, several years later, on the other side of a long striving for connection and love. After 80 pages, we learn that Fern is a chimpanzee, brought into the family as part of a psycholinguistics experiment run by Rosemary’s father, a professor at a Midwestern university. Fern is raised as Rosemary’s sister, then ejected from the family when she reaches a dangerous age and size.

The novel’s plot twists and loops, and is tricky to summarize without spoiling. Its most straightforward, least suspenseful through line details Rosemary’s coming-of-age as an undergraduate at UC Davis, without Fern and, for the most part, without friends. She undergoes a series of misadventures with an unpredictable new quantity, the beautiful Harlow: “I’m Harlow Fielding, Drama Department,” Harlow says, when they first meet. “No shit,” thinks Rosemary. The two are in a police car; Harlow has just publicly assaulted her boyfriend, in a kind of one-woman cafeteria food fight; though only a bystander, Rosemary has also been arrested. Rosemary’s runaway brother, Lowell, returns, disclosing Fern’s whereabouts and triggering most of the action, at least in its narrative present. The book’s six parts are shot through with passages drawn from Rosemary’s childhood memories. “Rosemary is for remembrance,” says Harlow, quoting Ophelia, when she and Rosemary first meet.

Harlow’s comment is but one of many tip-offs that Fowler is interested in something other than a conventional realism that would, for instance, refuse to play up the symbolic richness of a name like Rosemary. Reductive logics are also put in their proper place: “To this day, the Socratic method makes me want to bite someone,” quips Rosemary, reflecting on her father’s professorial pedantry. Far more interesting to Fowler are sarcasm, burlesque, carnival, vaudeville and slapstick, all of which make an appearance in We Are All Completely Beside Ourselves. This is a writer who believes in—and who has staked her technique on—pun and joke, departing from the conventions of the realist novel.

Fowler is not a funny realist in the mold of Jonathan Franzen, with his shamefully familiar grotesques, or Muriel Spark, with her unerring eye for even the faintest social absurdities. Nor is Fowler a postmodern funny antirealist à la David Foster Wallace. She is a witty writer, but wit isn’t exactly the word to use here. We Are All Completely Beside Ourselves traffics in uncanny kitsch—in, for example, a mocking ventriloquist’s puppet named after a character from the realist classic A Tale of Two Cities—plus a kind of formal comedy. The book expresses a refreshing faith in formal patterning: Rosemary’s earlier incarcerations turn out to presage later imprisonments; her imaginary friend, discussed at length in the novel’s early pages, is reified in that speechless puppet. Chapter 5 of the book’s second part concludes with an embarrassing scene involving a smear of red leaves on Rosemary’s crotch; chapter 6 opens with her mother at the piano, playing “Maple Leaf Rag.”

The novel’s only flaw is that Rosemary can grate on the nerves. At times, her narration is too attentive to its own punning granularity. Rosemary admits in the book’s first passages that she talks too much, almost certainly because Fern can’t. But on those occasions when she does land her jokes she exemplifies the lightness and openness to other forms of life latent in animal studies, as in Derrida’s long and deft The Animal That Therefore I Am, which wanders from thinker to thinker, animal to animal, and down long trails of jeux de mots. At times, too, Fowler’s prose is a revelation. “Every gangplank a seesaw,” she writes of Rosemary’s mother after Fern leaves the family. Gangplank and seesaw, grim and effective slapstick: Fowler encapsulates in a single, vivid phrase the mindset of a woman made manically ebullient by grief for a lost child—or by her own inability to fit Fern into a single category and therefore grieve effectively. Was Fern her daughter? Or her pet? A person, or an animal? Fowler’s single apothegm captures perfectly Rosemary’s mother’s mad fluctuation between two insufficient—even false—choices.

Humans have been set apart from non-human species as the only animal that laughs: we are not only homo sapiens but also homo ridens. Rosemary herself notes that “mocking laughter is a distinctly human trait.” Aristotle claimed that a sense of humor is exclusively human, as did Hazlitt,1 as did Rabelais, with his famous “Le rire est le propre de l’homme.”2 But we know that isn’t true. Primates laugh, and heartily (and perhaps even mockingly, according to Brian Boyd and others3), especially at the unexpected and incongruous. Fern signs, feels, and laughs. She reminds the reader that the most unpredictable experiences—the inadequacy of our knowledge, of our every system of control—could be experienced as pleasure. As joy.

We Are All Completely Beside Ourselves: Fowler’s title invokes both desperation and hilarity. To be beside oneself is to be outside one’s self, open to the world, to the feelings and thoughts of other creatures, even or especially if they aren’t human. Fowler’s novel doesn’t ignore the sorrows likely attendant on that attempt. It also suggests that embracing those forms of radical difference might be great fun. It might even be—it might have to be—funny.

We Are All Completely Beside Ourselves