The M Word—In Multiplex
We don’t know where the coy linguistic practice of using-while-not-using so-called offensive words by appending the term “word” after its initial letter and preceded by “the”—as in “the N-word”; “the ... 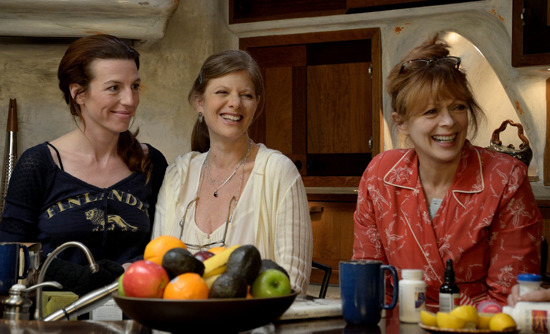 We don’t know where the coy linguistic practice of using-while-not-using so-called offensive words by appending the term “word” after its initial letter and preceded by “the”—as in “the N-word”; “the C-word”; “the F-word”; “the R-word”—came from. The practice functions in spoken and written speech the way the “bleep” does on television. Everyone presumably knows what the word in question is and says it silently to themselves whenever they hear or read the euphemism, but a quaint regard for a Victorian notion of what can be said in “polite company” allows the meaning of the expression to be put into play while not offending anyone. Furthermore, the construction is usually reserved for talking about the word rather than using it in its actual grammatical form. As such, it functions as a meta-phrasing, raising consciousness about the need to be sensitive to the potential that words have to hurt or defame their referents.

This year, Henry Jaglom, the Woody Allen of the West Coast, has cleverly appropriated the practice by applying it to another value-laden, emotionally charged topic: menopause. And while the word “menopause” itself is not as socially verboten as the four words alluded to above, the taboo phenomenon itself is, in some ways, just as culturally vexed and discomforting as the subjects of the other coded expressions.

Jaglom’s decision to name his new film (his 19th feature) The M Word cleverly appropriates the semantic maneuver to several ends. He invites the audience to think about the function of the hyphenation gambit in all its manifestations while at the same time bringing menopause out of its closet for some close scrutiny.

The plot device Jaglom utilizes for this purpose is the “film-within-a-film” construction employed in The Truman Show, The Artist, and Boogie Nights. Here, as in those films, the nature of the medium itself and the way it shapes the behavior of individuals becomes both metaphor and content. In The M Word, a character named Moxie (Tanna Frederick) sets out to make a documentary television series—inspired by her menopausal mother and two aunts—that involves interviewing a variety of women (and one man) about their experiences and views on menopause for a TV documentary called “The M Word,” which is also the title of the (non-documentary) film we, in turn, are watching in the theater.1

Moxie is an actor on a children’s television show at the fictional KZAM network in Los Angeles, where the staff seem to have one thing in common: most of them are menopausal women. The appropriately named Moxie pitches her idea for “The M Word” at a crucial time—her station is bleeding money and a New York–based “suit,” Charlie Moon (Michael Imperioli), is flown in to assess the situation (someone is embezzling funds from the station) and make any necessary employee cuts. And this is where the title’s second meaning comes into play: money. The parallel between the menopausal women and the “menopausal” television station is obvious: both are on their last legs and losing to younger and fresher women/programming. The discussions about money are handled in the same delicate way as menopause; it is something no one wants to talk about but everyone knows what is happening. Moxie, however, brings both M-words out of the closet.

The documentary includes many zany exchanges, as when Moxie asks her mother “What are you feeling right now?” and her mother (Frances Fisher), experiencing a hot flash, fans herself with a head of romaine lettuce and responds, “I’m feeling quite wet.” But it is this type of pep that serves Moxie well when she organizes an impromptu sit-in to save her colleagues’ jobs immediately after Charlie fires a good portion of the staff.

By this time a romance has developed between Moxie and Charlie that pits menopause against money with—spoiler alert—both coming out victorious in the end. The film also includes a good deal of commentary on PMS, as the menopausal women interviewed in the documentary reflect on their experiences as younger women. (These interview shots are humorously intercut with a scene of a debilitated Moxie struggling with her cramps.) Making the comparison between the painful menstrual cramps they used to have and the effects of menopause they are currently experiencing, the film presents the women as now free to enjoy their lives as older women and to face menopause as a rebirth.

A third M-word that Jaglom toys with refers to the current state of broadcast “Media” with its penchant for sensational and cheap—both in taste and cost—television content. Charlie is interested in the “reality TV” style of Moxie’s menopause documentary, which is shot on location with hand held cameras and uses non-professional actors. Charlie also identifies its suitability for niche market cable TV, seeing it as a more crass version of programming on the Oprah Channel.

The result is a triple M-word send up: menopause, money, media. Unfortunately, the burden of carrying all this baggage is a bit much for what is at bottom a romantic comedy. The improvisational freedom Jaglom allows his actors gives them free rein to banter and top each other’s performances, and the film’s ambition stretches the run-time to an exhausting two hours that crosses into self-indulgence. Yet despite its limitations, the fact that The M Word challenges menstrual taboos and sheds a bit of light on their social construction deserves a nod of respect.