The Making and Masking of Genius
Siri Hustvedt’s The Blazing World puts a clever twist on an old plot. In most versions of this plot, a woman is born with creative genius. She has a moment of hubris, achieves sexual fulfillment, and ... 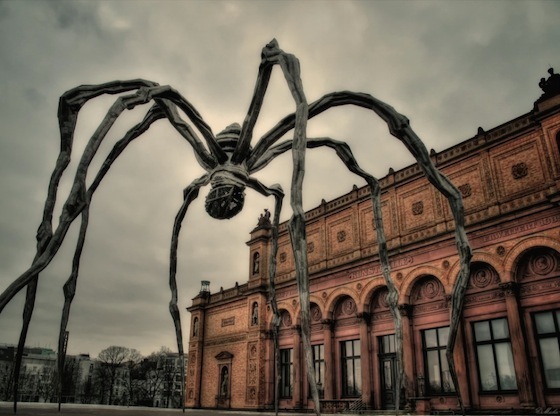 Siri Hustvedt’s The Blazing World puts a clever twist on an old plot. In most versions of this plot, a woman is born with creative genius. She has a moment of hubris, achieves sexual fulfillment, and endures reversals of fortune. Wiser, she realizes that only work, and maybe a child, can guarantee enduring joy. The heroine’s work may or may not be recognized by the public, but her story will be told, at least by the book we are reading.

Hustvedt alters this plot slightly: her heroine, Harriet Burden, decides to prove the sexism of the contemporary New York art world. It’s never entirely clear what Burden’s art looks like, and the book’s plot twist revolves around how difficult it is to recognize. It involves installations of humanoid figures and is perhaps supposed to remind us of Louise Bourgeois’s protean sculptures. Burden arranges to have three male artists take credit for three exhibitions of her work. Burden calls the men her “masks.” Her scheme backfires because her devious third mask uses ridiculously convoluted Theory and turns her into a laughingstock. Then the usual plot proceeds.

Some examples of novels with similar plots include B. A. Shapiro’s The Art Forger (2012), Michelle Zackheim’s Broken Colors (2007), and Anita Amirrezvani’s The Blood of Flowers (2007). Do these novels console mature women readers for the reality that so few women artists have achieved the social status of genius or sold their work for top prices? Do they reassure women writers with an ultimately successful alter-ego heroine? Does the character of the woman artist magnify the creative potential women readers feel in themselves?

Unlike versions of the plot set in safely distant times and places, The Blazing World takes on today’s art establishment, as did Steve Martin’s An Object of Beauty (2010). In both books, dealers, auction houses, art magazines, collectors, curators, critics, and art historians are all in it for money, sex, and celebrity, mostly for the money. After Martin’s allegorical anti-heroine Lacey Yeager, who gets blamed for the art world’s corruption, it’s a minor perverse relief that Hustvedt’s heroine Harriet Burden gets shafted by it.

Hustvedt tells Burden’s story through multiple voices. These include people with whom she had had close personal bonds—her best friend, her lover, her children—as well as critics and art historians. It’s a pretty standard postmodern recognition of our fragmented, contingent identities. But the danger of emulating an obnoxious voice, like that of the magazine ArtForum (here coyly veiled as “Art Assembly”), or the humorless academic, complete with footnotes, is that it can make for reading that is, well, obnoxious. The novel unfolds after the death of Harriet Burden, and is told partly through her diary entries. Unfortunately, the heroine’s voice is among the less attractive voices telling the story:

Vindication of the Rights of Harriet Burden! They have swallowed the Tish shit whole, gulped it down so readily! I am dizzy with success, to quote that demon, Joseph Stalin … The little boy with a few fresh acne scars has whetted their appetite for more. Wunderkind works, more smartass jokes with art historical flourishes, and the buffoons are pounding out their enthusiasm in reviews. They haven’t found a tenth of my little witticisms, my references, my puzzles, but who cares?

Harriet’s likable qualities are best established by her daughter, her childhood friend, and her lover. Here, for instance, is her lover addressing her children: “Daddy-o took Mommy for granted. Did he fight for her? No, he did not. Where did it come from—Harry’s pseudonymous mania—except from him? How many women artists did Felix Lord show? Three? And over how many years? Harry watched, and Harry learned. She learned that her very own art-hustle mastermind wasn’t going to lift a finger for her work and that only art’s big boys get satisfaction.”

Our heroine tries too hard. Her name is Harriet Burden, and she is a burden to herself, as the author says far too many times. She is unusually tall and strong. We might have been allowed to recall Bertha Mason, the archetypal Madwoman in the Attic—but, no, Hustvedt makes the comparison for us. Harriet Burden’s first name is a variant on a man’s name, and in case we didn’t get that fast enough, her nickname is Harry. Her selfish, happy, domineering husband is named Felix Lord. Get it?

Harriet Burden is fierce, yet the end of her story could hardly be more sentimental. It promises that true art will be recognized, somehow, sometime. The novel’s title, The Blazing World, refers to Margaret Cavendish, the Duchess of Newcastle-upon-Tyne (1623–1673), a writer and a scientist. A note on page 329 quotes Cavendish in Sociable Letters, published in 1664, on why she burns her manuscripts: “they make a great Blazing Light when they Burn; And so leaving them to your Approbation or Condemnation, I rest, Madam.” Women’s past is prologue.

Does Hustvedt’s woman artist plot correspond to real life? Hustvedt herself was recently and glamorously featured in Vanity Fair, so it seems fair to use a poll taken by that magazine to assess the art world she indicts. For its December 2013 issue, Vanity Fair asked artists, academics, and curators to name the “six greatest living artists.” The results: “Gerhard Richter, 24 votes; Jasper Johns, 20 votes; Richard Serra, 19 votes; Bruce Nauman, 17 votes; Cindy Sherman, 12 votes; Ellsworth Kelly, 10 votes.” And that one woman on the list, as Hustvedt would surely note, has made her career by masking herself.

Does the character of the woman artist magnify the creative potential women readers feel in themselves?

Hustvedt might also point out that Sherman is like the five men among the “six greatest living artists” in one crucial way. Like them, she has been reliably producing recognizably branded work for decades. You might think that rarity automatically increases price. But stratospheric market value in contemporary art depends on competition among many collectors, which requires a lot of fuel. The social circumstances of women’s work often shorten the careers of women artists and divide their output into inconsistent bits. To recognize their genius, you have to be willing to let go of the criteria for success that govern the art market. Hustvedt despises these criteria, and yet her book is confined by them. She is too busy being angry to look elsewhere.

Consider, for example, Sherman’s contemporary Francesca Woodman (1958–1981). Woodman represented the same issues of feminine identity and masking with which both Sherman and Harriet Burden contend. Woodman’s self-portraits reach so deep into our souls that we can never see the world in the same way again. But her photographs are small, few, black-and-white, and carefully guarded by her family. There is nothing spectacular about Woodman’s art.

Which generation’s battle does Hustvedt fight? A graduate student suggested to me this spring that a comparison between a Picasso collage and a Woodman photograph would be a good final exam for an introductory art history class. I cringed. Never, I thought, could Woodman withstand comparison to Picasso. But I couldn’t admit my anxiety to graduate students, so I included the question in the final. Then I read the exams. One after another, dozen by dozen, the undergraduates confidently responded. Both those artists changed how we understand something important, they said. Picasso changed how we understand the role of the sign in painting. Woodman used signs to change how we think about the role of women in society.

These are the college students whose mothers and grandmothers are invested in the plot of The Blazing World. It may be an angry plot. It may be a heavy-handed plot. It may even be wishful thinking. And it may also be the kind of fiction that helps make itself come true.