The Market and the Fest
This is the latest installment of Public Streets, a biweekly urban observations series curated by Ellis Avery. In the rural villages of southern Germany, the rain rolls in breakers down the hills ... 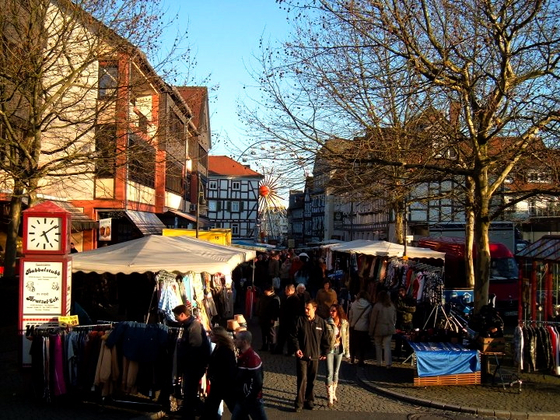 In the rural villages of southern Germany, the rain rolls in breakers down the hills, curving along the little streets, stretching its path in tiny rivulets, dampening window box gardens. The villagers are so efficient: on the highways surrounding a small town called Butzbach, they use the rain-fed medians as miniature farms for flowers. One of their specialties is the yellow daffodil, native to the meadows and woods of Europe. As the rain gently careens downward, the daffodils’ collective dewy, bittersweet scent rises.

In spring, the town unravels itself in the newly remembered sun. The farmers’ markets swell. They take over the town square twice a week, even in the rain. With the discipline of an ant colony, every cart takes its time-honored place on the cobblestoned expanse.

The market starts on the south side of the square, near the town hall. The town hall itself looks like a gingerbread house, crisscrossed with wooden beams and faded indigo floral designs. The cheesemongers are always first to tempt passers-by, and quick to offer samples; one graying vendor enthusiastically pairs veiny dark blue crumbles with a raspberry jam on thin slices of baguette. The bakery across the way keeps its doors open during the market, the swirling whiffs of chocolate croissants and hearty Brötchen entrancing shoppers. Stoic butchers worry about keeping their products cold in the spring sun. Small gossipy women craft little wooden horses. Wizened Turkish men sell deluxe knife kits. Blue-eyed Italian brothers selling gelato blush upon hearing a “grazie.” The flower stands overflow into the footpath with competing rainbows of daisies, tulips, and, of course, daffodils.

Just beyond the end of the market is a large unadorned fountain, and this is where, with luck, one may witness the end of winter’s hibernation with the arrival of three long freight trucks. In the early morning, a few lanky 20-somethings leap gracefully from the back of each. Germany, like much of Europe, has an aging population, and it is always strange to see young native speakers. These men, though, don’t speak much at all. They instead focus on unloading the trucks, their strength belied by their slender forms. By noon, the town square across from the farmers’ market looks like a giant baby’s playroom: large metal barriers are stacked against colorful cubes and orbs. At three in the afternoon, the market is beginning to close but the Fest is starting to grow. That’s what those freight trucks are—the tender shoots of a traveling festival.

Growing from the plaza like the daffodils in the middle of the highway, the unfinished, skeletal spokes of the Ferris wheel reach for the sky. By sunset, the wheel is complete, taller than even the town hall, resplendent and alien. In an adjacent field, more rides have sprung up—fast, spinning, gaudy, peculiar attractions. Impossibly, the Fest opens that same evening. A ticket booth exchanges real money for scarlet plastic coins, translucent when held up to the sun. 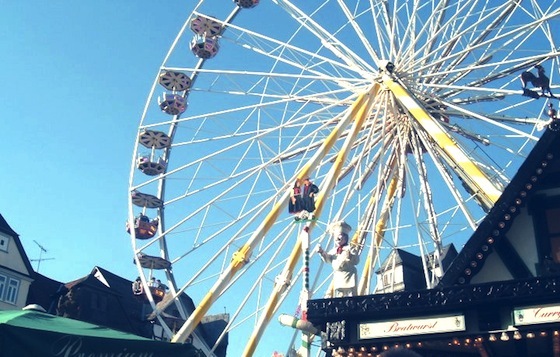 As dusk settles, the soft light from gas lamps combines dreamily with the electric brilliance of the festival rides. A large square tent has appeared by the wheel where a husband-and-wife team makes pommes frites (served with mayo) and serves bratwurst while taking orders from all four sides. Quietly amused parents drink local beers from plastic cups. Children shout “faster!” on the rides; the operators comply, unrestricted by safety regulations. Carnival music fills the twilight. Feet press down into the earth, still spongy from the rain. Swaying gently in an iridescent purple cab on the Ferris wheel while looking at the daffodil fields that stretch seemingly in all directions, one can feel the occasional raindrop. Just as quickly as the rain comes, the clouds pause, holding their breath.

It’s August now, and the heavy summer air, laden with the smoky scent of the blooming chamomile, is perfect festival weather. And the carnivals will appear and disappear until the grand finale of Oktoberfest, after which everything stills until the spring rains come again.