The Met Goes to China
In July, while in New York, I toured the Metropolitan Museum of Art’s much buzzed about “China: Through the Looking Glass,” a visually stunning multimedia exhibit that showcases the varied ways that ... 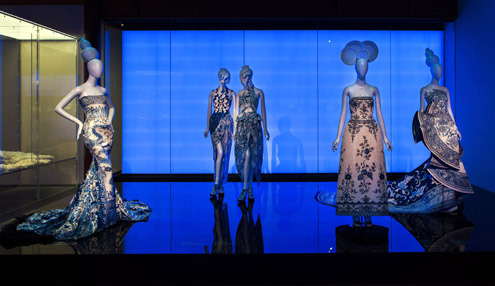 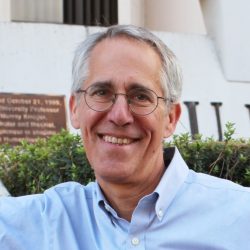 In July, while in New York, I toured the Metropolitan Museum of Art’s much buzzed about “China: Through the Looking Glass,” a visually stunning multimedia exhibit that showcases the varied ways that Western fashion designers have been inspired by Chinese art and culture. The show has set attendance records, and is the Met’s most visited costume exhibit ever. Its run has been extended to Monday, September 7th, meaning there is still a chance to see it. Even those who don’t attend in person can peruse the sumptuous catalogue created to accompany the exhibit.

The show has earned deserved accolades for its scope and boldness, along with the inevitable minor criticisms of specific curatorial decisions, and one much more sweeping critique: that the exhibition, which includes images associated with bound feet and opium dens, perpetuates outmoded and disturbing stereotypes. The curators are very upfront in the text accompanying the exhibit and in the catalogue about the fact that their focus is on an imaginary China, not the real place. They are presenting, they say, an interpretation not of the history of China and its people, but of Western fantasies about them. They are keenly aware of Edward Said’s work and cite his classic Orientalism, but this has not prevented the criticism that they are, intentionally or not, falling into the very traps he lambasted.

My goal here is not to try to settle this argument, but rather to reflect on how the show could have been organized differently and to point Public Books readers to five worthy books that might help them decide for themselves what to make of the show.

First, though, a quick summary of how the exhibit is organized, and what I liked about it. The exhibit’s main organizing principle is chronological: from China’s distant past toward its present, showing how objects associated with different Chinese eras have influenced Western designers. The best displays link Chinese objects of a given type and time to clothing that was, or seems to have been, inspired by them. One of my favorite sections brings together white and blue dresses with decorations evocative of Jingdezhen’s fabled porcelain pieces of the Ming (1368-1644) and Qing (1644-1911) eras with delicate vases, bowls, cups and plates of the sort the designers had in mind while creating their eye-catching clothing. I also liked later rooms that juxtaposed remnants of material culture from the Cultural Revolution decade (1966-1976), Warhol prints of Chairman Mao, and outfits inspired by the look of the Red Guards who followed him.  What I liked best of all, though, was how film clips, selected by celebrated Hong Kong director Wong Kar-wai, were used throughout to complement displays of clothing, paintings, sculpture, jewelry, and other objects.

When I walked through the Met, I occasionally thought of Said’s Orientalism, but another famous cultural theorist came to mind more often: Roland Barthes. When I entered, I was thinking about an aphorism of his I had recently heard French historian David Bell quote in a talk: “tell me how you classify, and I’ll tell you who you are.” And making my way through the many galleries of the show, I saw an allusion to one of Barthes’s best-known books, The Empire of Signs, which is actually about Japan, not China, or rather about an imaginary place that the French critic says was inspired by that island country but is not that island country.  The combination got me thinking of how alternative approaches to classification might have produced other, perhaps equally interesting shows.

For example, the curators treat “Western designers” as a group, but these creative figures could have been separated by nationality.  Had that been the case, rather than providing a window onto generic “Western” fantasies about China, the show could have illuminated the sometimes overlapping, sometimes diverging contours of Italian, French, British, and American dreams and nightmares. This would also have highlighted how national fantasies regarding China are often projections of specific hopes or anxieties distinctive to that Western country. 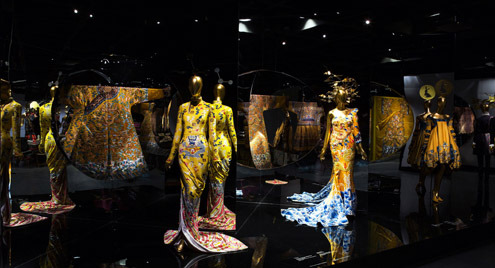 Manchu Robe (2015). / China Through the Looking Glass at the Metropolitan Museum of Art

In the American case, for example, when we were first becoming a manufacturing powerhouse more than a century ago, the allure of untold numbers of potential Chinese consumers beckoned with an allure distinct from that it had for, say, Italians of the time; now, worries about our decline from a position of global economic supremacy colors our fears relating to China in ways that are not felt in Britain.

A more substantially, but still not radically, reimagined version of the exhibit could have occasionally brought in clothing inspired by Japan rather than China, and offered examples of creations that seemed to be influenced by the aesthetic objects and traditions of both countries at once. The lines can blur, after all, as slipping a nod to The Empire of Signs into a show on China illustrates.

I am not sure that other classifications would be better. But the fact that I propose them may tell readers who I am: someone intrigued by how the lines between China and Japan, countries I think of as very different, can get tangled and entwined in Western minds, and an American specialist in Chinese studies who has often been struck by how my compatriots’ hopes and fears about China can vary from those of people from other parts of the West.

I’ve thought about all this before, but writing a book about the Boxer Uprising of 1900 has made me more keenly aware of it. In my research, I’ve come across a Collier’s magazine cover that shows Chinese anti-Christian militants, whom Westerners dubbed “Boxers,” carrying what look suspiciously like Japanese samurai swords. I have also seen texts that reveal how differently American and British imaginations responded to the Boxers’ siege on Beijing, in which they held foreigners from both countries: nightmares associated with the Old West leapt to some American minds, while ones linked to 1857’s Indian insurrection came to the British. 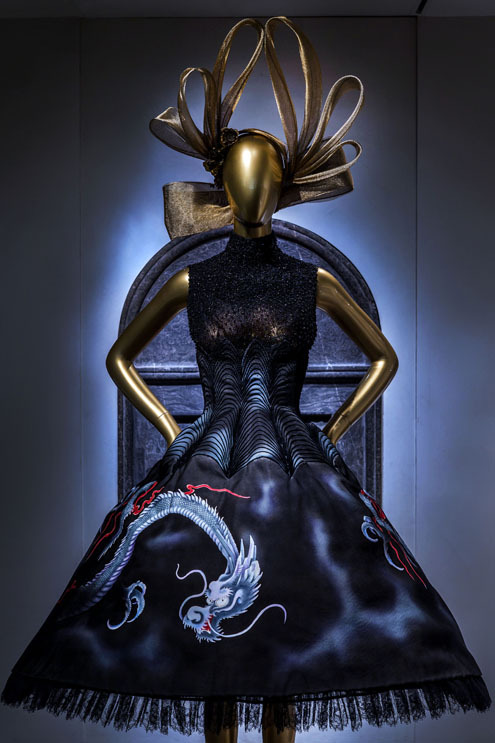 Ancient China (2015). / China Through the Looking Glass at the Metropolitan Museum of Art

Finally, those five books promised to curious readers, all of which are worth knowing about while considering the exhibition. The show’s catalogue has a very useful bibliography, which includes references to some lovely and illuminating works, such as Antonia Finnane’s Changing Clothes in China: Fashion, History, Nation (Columbia University Press, 2008), the best book I know with a Chinese focus and an interest in apparel. I will skip over works already on the minds of the show’s creators to focus instead on ones that they didn’t have in mind:

1)      Jonathan Spence, The Chan’s Great Continent: China in Western Minds. Written by an innovative scholar famous for micro-histories such as The Death of Woman Wang, and his important survey, The Search for Modern China, this book is based on a series of public lectures that were paired with assigned readings. Less well known than some of Spence’s other books, it is one of my favorites, in spite, or perhaps because of, how quirky it is.  In limning the varied ways that China has made impressions on Western minds, Spence tackles some very expected texts, such as accounts purporting to describe Marco Polo’s travels, and some totally unexpected ones, such as the glancing nods to Chinese issues in Mansfield Park.  Some chapters refer to “the West,” as the book moves forward from the distant past toward the present, but Spence also focuses on geographical and cultural variation, as in his separate discussions of the distinct French and American visions of China in the late 1800s and early 1900s.

2)      Lynn Pan, Shanghai Style: Art and Design Between the Wars. This beautifully illustrated book focuses on a much shorter period, looking not at how a real or imagined China influenced things produced in the West, but rather how European and American practices and aesthetics were refashioned by Chinese artists and architects in Shanghai into a fascinating hybrid. Pan is a talented writer of creative non-fiction who also engages in top-notch research, and is the author of a compelling memoir that deals with movement between East and West, Tracing it Home: A Chinese Family’s Journey from Shanghai. Pan’s Shanghai Style complements the representations of Old Shanghai prominent in many of the show’s film clips, which were selected by someone working in Hong Kong, itself now a meeting point between aesthetic and creative worlds similar to what Shanghai was between the wars.

3)      Sheila K. Johnson, The Japanese Through American Eyes. This slim volume explores stereotypes about Japan within the United States, but also discusses, in ways relevant to thinking about the Met show, how ideas about the Japanese and Chinese in this country have interacted and sometimes switched places. The fact that it was written when Japan’s dramatic economic rise was generating some of the same excitement and concern that has more recently been felt about China gives it added interest now.

4)      David Porter, The Chinese Taste in Eighteenth Century England. Written by one of the rare specialists in literature who feels equally at home when dealing with Chinese and British novels, and has written insightfully about parallels between them, this book offers a graceful and detailed case study of ideas relating to China in a single period and place. The value of this work, where the exhibit is concerned, is to show how a tight chronological and geographic focus can help uncover what is generic and specific about the way that those within one culture wrestle with what is familiar and exotic about a distant land.

5)      Harold R. Isaacs, Scratches on Our Minds: American Images of China and India. I am continually amazed at how timely this book—which was first published in the 1950s and has been reprinted many times since, sometimes with updated introductions by the author—remains.  The author spent extended periods in Asia as a journalist and wrote important books on Chinese political struggles before starting a career in the American academy. Here he explores how positive and negative images of China have risen and fallen over the decades, and compares those to the less intense but equally variable associations that India has had for Americans. Based on interviews with influential Americans, who were asked to reflect on what kinds of images came to mind as they thought about China, it does for twentieth century America many of the things that Porter’s book does for England of the 1700s.

The five books just described were not written to accompany an exhibit, but each might easily inspire one. Since “China Through the Looking Glass” asks us to think about how a place has given rise to fantasies that have then been materialized in fabric, it seems apt to suggest that the texts just introduced could serve as the basis for conjuring up imaginary exhibitions that would complement the real one currently running at the Met.

Featured image: Blue and White Procelain (2015). / China Through the Looking Glass at the Metropolitan Museum of Art

Shanghai Style: Art and Design Between the Wars

The Japanese Through American Eyes