The New Silk Road: Dordoi Bazaar in Bishkek, Kyrgyzstan
At the largest bazaar in Central Asia, an informal secondhand market has become something like a metropolis unto itself. 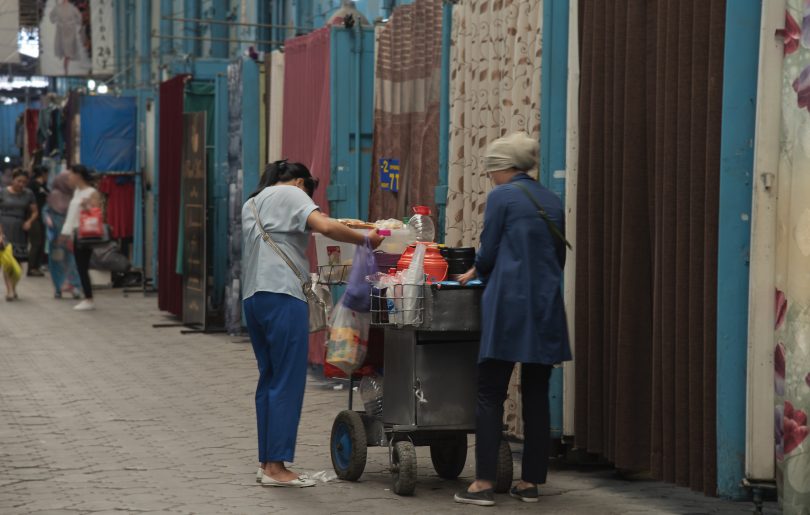 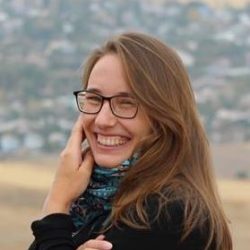 In the morning, when the shops are still opening at Dordoi Bazaar in Bishkek, Kyrgyzstan, there is a kind of sleepy anticipation that pervades the air, as shopkeepers pull open the metal doors of shipping containers and begin to hang up their wares, or set out mannequins. At one entrance, plastic toys are already on display, spilling out of double-stacked pale blue shipping containers: bundles of Hula-Hoops, soccer balls, pool floats, plastic chairs, and other items create a riotous display of color in the early quiet. Once the day gets going, any sense of tranquility is quickly dispelled, as vans and taxis drop off shoppers, women pushing carts selling tea begin their rounds, and porters jog through the walkways pushing carts, piled high with goods, from one point of sale to another.

Dordoi is the largest bazaar in Central Asia, and it draws goods from across Asia and Europe. While conducting doctoral field work in and around Bishkek in 2019 to explore how the relationship between individual and nation is constructed in the urban space of the capital, I often traveled to Dordoi Bazaar to speak with merchants. Each morning, I walked from my apartment to the bus stop at the intersection of Chuy Street and Sovietskaya Street, across from the Fighters of the Revolution monument in the center of the city. There are a number of marshrutkas (shared minivan taxis) and trolleys that go to Dordoi, but I always took marshrutka #230, which runs a direct route with stops for people who ask to be let off along the way. The ride of about 20 minutes to the outskirts of Bishkek, where Dordoi is situated, was generally quiet in the mornings, punctuated by the soft murmurs of passengers. 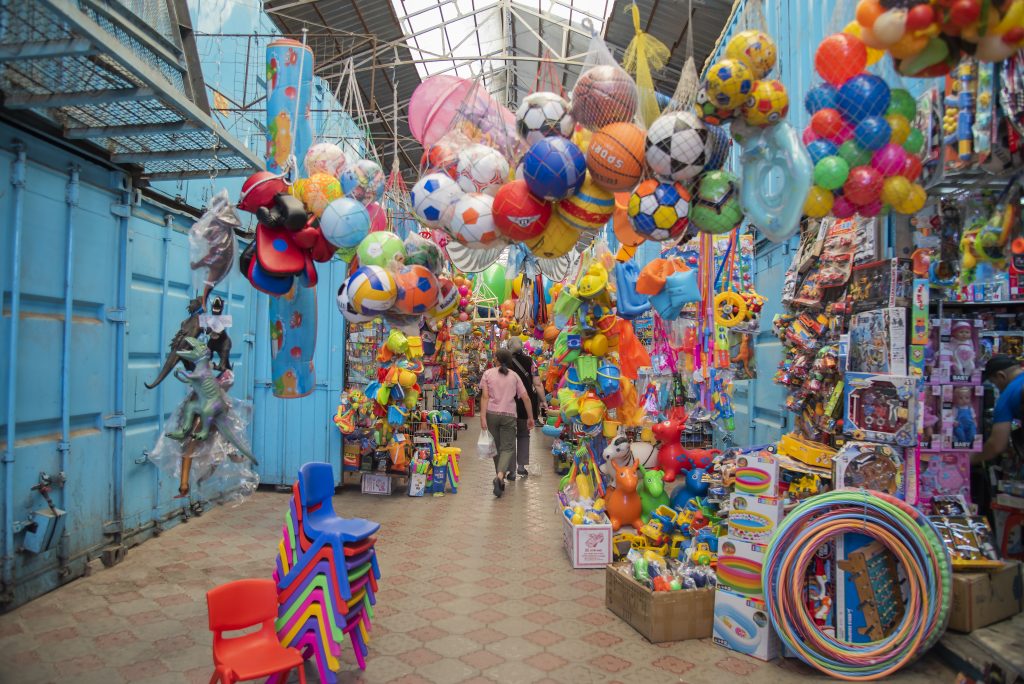 Morning in the bazaar. Photograph by the author

As the marshrutkas approach along a dusty two-lane road and turn a corner around the entrance to a cemetery, the space of the bazaar materializes slowly, as if diluted at the periphery and concentrated in the center. Double-stacked green shipping containers on each side of the road come into view, with awnings giving shade to the lower one; the sides are open, and tables piled with wares stand along the road. Built-in shelves are stuffed with ropes or bags or tape, and bridles or collars or coils of rope hang from the awnings. Although many of the containers at the outskirts of the bazaar contain goods connected to the moving and packing of other goods, every once in a while there is a shipping container with other items for sale—such as sports equipment—with mannequins on display wearing jerseys, and soccer balls out front.

The marshrutkas expel their passengers into one of two parking areas designated for buses. The #230 marshrutka stops in front of a main entrance flanked by gold-colored statues that depict shuttle traders, or chelnoki—entrepreneurs of the post-Soviet period who make their living carrying goods across international borders, and who take their name from the shuttle of a loom. The statues depict these women and men—surrounded by the checkered plastic bags used to transport goods—who made Dordoi into the vibrant marketplace that it is today. 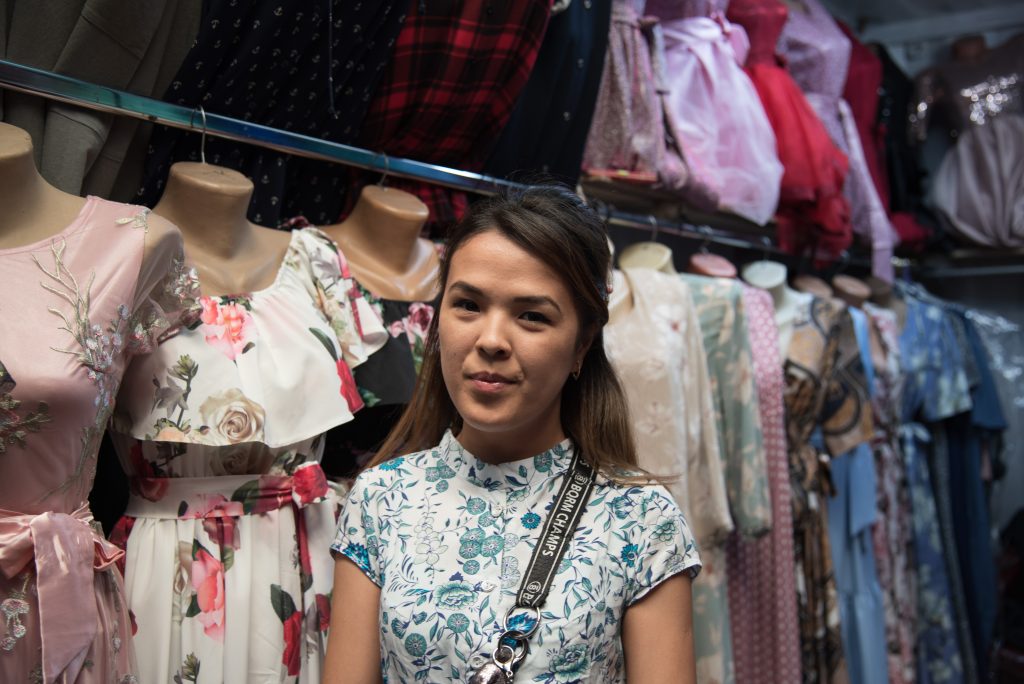 Dress seller. Photograph by the author

One warm morning in June, I arrived at Dordoi to the smell of burning juniper. A woman walked through the rows with a small, censer-like container, ushering smoke—thought to be cleansing and bearing the power to expel bad spirits—into the metal shipping containers. Even in Dordoi, amid the newest wares, the traditions of the past are always close at hand.

By the afternoon I found myself sitting with Gulzada, a Kyrgyz woman with worn hands and gold teeth that sparkled as we sat talking amid colorful women’s undergarments in her container at the end of a row.1 The long, skinny shipping container was stuffed to the brim, with two narrow shelves lining each side, and bras and underwear hanging, like overlapping tiles, from the walls. In the back of the container stood two small wooden stools, somewhat rickety from use, but which served well for a chat away from the noise and bustle of the passageway. Her section of the bazaar is where it all began, she explained. It is “the root of the bazaar, yes … the very heart.”2

When Gulzada came to Dordoi for the first time, in the early 1990s, the bazaar was a very different place. She described how, “at that time, they just laid a bag on the ground and threw goods into the bag, and, thus, they traded in the open … And then they started, little by little, to put up tarps and then containers. Dordoi, in general, expanded to become such a big, big market.”3 Other merchants spoke of similar processes: the growing numbers of shipping containers, and the addition of paving stones and metal and plastic roofing to cover the expanse of containers and alleyways. 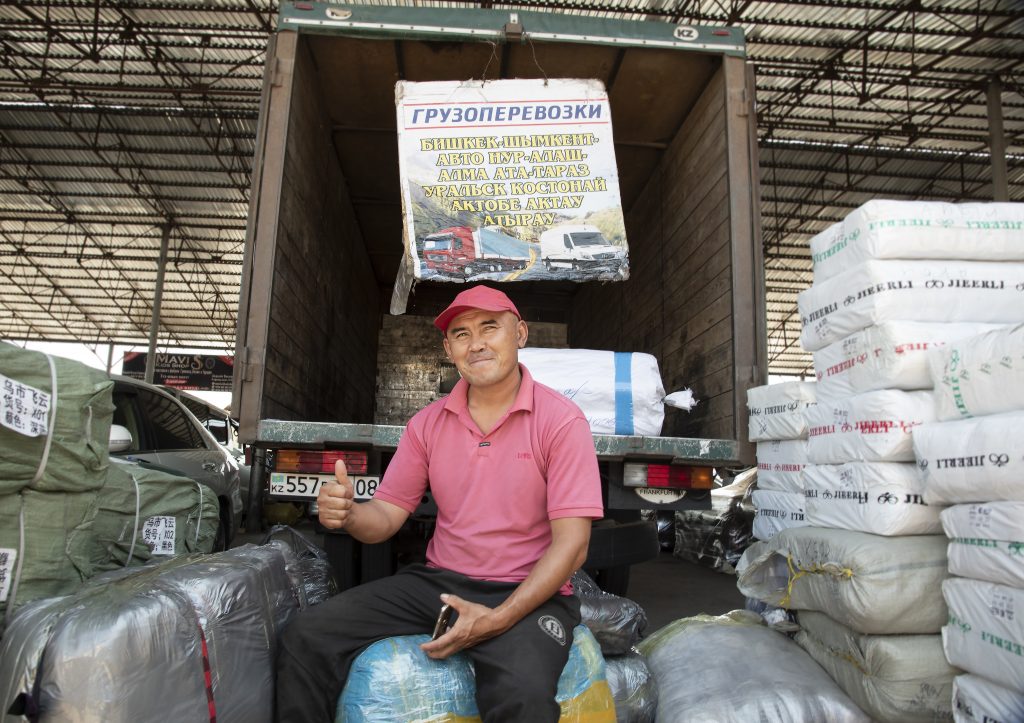 Cargo Transportation in Dordoi. Photograph by the author

These changes characterized the transformation of an informal secondhand market into something not unlike a metropolis unto itself. A “city within a city,” the thousands of metal shipping containers are stacked two-high to create a system of alleys and avenues that delineate multiple privately owned smaller bazaars, named sometimes for the origin of the goods sold there (such as “China” or “Europe”), sometimes for the goods themselves (“Rugs”).4 Gulzada explained the importance of the bazaar: “I don’t even know how many people work here. And first, it is those people who trade, who live. Thanks to Dordoi, the tradespeople live; the porters, who push the carts, they live; those who sell tea and who sell food, they work; taxicab drivers work; marshrutka drivers work. If you count, 20 or 30 kinds of professions live, thanks to Dordoi.”5 Gulzada and her family also live, thanks to the bazaar. Buying undergarments from China wholesale in one part of the bazaar and reselling them in another, Gulzada and her daughters-in-law carry on a business in trade, while her sons work around the bazaar as taxicab drivers. While Gulzada and her family conduct business entirely within the world of the bazaar, others, such as Aida, a 65-year-old Kyrgyz woman, still make trips abroad. Since 1994, she has been flying to Delhi to buy wares for resale, at times as regularly as once a month.

On another afternoon, sitting with Aida in her shipping container, surrounded by lighters, incense, and other trinkets from India, the bazaar’s distant commercial reach felt very close at hand. Over the course of the month, I had spoken with vendors of fur hats from Russia, socks from South Korea, women’s dresses from China, and men’s suits from Turkey, in addition to those making garments locally. However, despite the far-reaching commercial ties of the bazaar, it still felt very local, very personal. As we sat together, Aida suddenly spotted a purveyor of drinks and turned to me, asking, “Will you drink? Coffee? Tea? What would you like?” Hearing my answer of “tea,” she called out, using the informal form of address, “Sonya! Pour us tea!” and turning to me again, asked, “with lemon?”6

Featured image: Selling Tea and Snacks. Photograph by the author