“The People v. O. J. Simpson” as Historical Fiction
The location is wrong. The white Bronco is clearly weaving through traffic on the 710 South as it approaches its intersection with the 10, on the eastern border of El Sereno, just by the Cal State LA ... 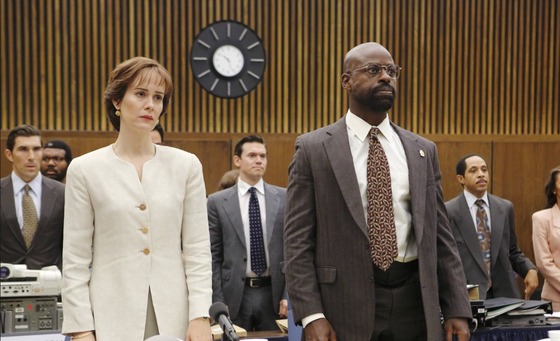 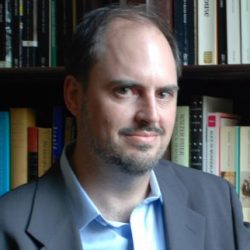 The location is wrong. The white Bronco is clearly weaving through traffic on the 710 South as it approaches its intersection with the 10, on the eastern border of El Sereno, just by the Cal State LA campus. In June 1994, O. J. Simpson and Al Cowlings would have had no reason to venture that far into the Eastside; their legendary trip, between Encino, Orange County, and Brentwood, was mostly played out on the 5 and 405, the region’s major north-south arteries. In the context of a city notoriously opinionated about its driving routes, the substitution is disconcerting.

But the light is just right: the soft yellowish glow of a California evening in early summer, the lingering brightness of the sky set against the shaded freeway. It’s the light one remembers from the famous video footage of 1994, the lengthening shadows cast by both Bronco and police car in their parade-like procession toward Brentwood, watched by those to the east after their own nightfall. 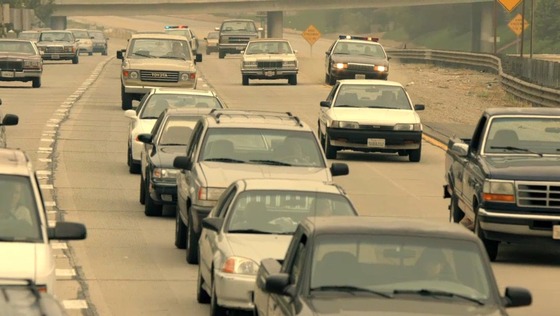 Getting that light right is the key to understanding the version of history offered by The People v. O.J. Simpson: American Crime Story. The show’s job, as its creators seem to have understood it—and at which they succeed remarkably well— is not fidelity to historical detail, but evocation of a vanished era in its most intimate aspects: the moment-to-moment feeling of being alive then, the sensory and affective horizons of a time still within living memory, seen through the slight parallax of the present. Big narrative resolutions, like guilt and innocence, are beside the point. Instead, small things get magnified: the peculiar valence of scenes watched over grainy videotape and cathode ray tube televisions; the bright colors of print tabloids, hidden on desks and in drawers like samizdat; the quality of light playing on a police chase. The nuances of personal interaction between genders and races are part of this minutely observed world as well, although the tension and simmering resentments they display—despite the different haircuts and outfits—are much more immediately familiar.

What this means is that, allowing for all of its early 21st-century savvy and its very different medium, The People v. O. J. Simpson bears a surprising resemblance to a Victorian novel. It was one of 19th-century fiction’s most subtle inventions: the idea that realism’s gaze was sharpest when focused on the recent past, neither beyond living memory nor quite like the contemporary world. Thackeray’s Vanity Fair starts 35 years prior to its writing; Dickens’s Little Dorrit, 30 years; Eliot’s Middlemarch, slightly more than 40 years; Hardy’s Tess of the D’Urbervilles, roughly 20.

The slight but decisive gap created by a shift back two, three, or four decades, into the youth of the writers themselves, was a way of thinking about present dilemmas through the tension these narratives created between nostalgia—the simple, irresistible longing for what is gone—and identification, the recognition of how much of that past unhappily persists. It was a way of producing a realism that felt the weight of time: a realism of incremental change, equivocal and uneasy, aimed at a middle distance where the past hasn’t yet hardened into myth, where its seams still show.

It’s a compromise more often associated with novels than film or television, which oscillate between a bleeding-edge fascination with the present and the spectacular indulgences of period drama, with its lovingly reconstructed Edwardian drawing rooms, ancient Roman atria, and Civil War battlefields. Television in particular, however, seems to be waking up to the power of the slight historicity of Victorian realist technique. There is, of course, the immense popularity of Mad Men’s portrayal of imperial America’s 1960s belle époque; more recently, the adventures in late Cold War historiography of The Americans or Deutschland 83, and the Carter Administration shabbiness of Fargo’s second season. Artists resurrecting the era of their youth—like The People v. O. J. Simpson’s directors, Ryan Murphy (born 1965), John Singleton (1968), and Anthony Hemingway (1977)—with the nuanced psychology and novelistic intimacies usually reserved for the present: this is more neo-Victorian than any Julian Fellowes adaptation, despite the surface dissimilarity between the show and any Victorian novel. At the same time, these shows manage a complex double address, partially nostalgic, aimed at those old enough to recall the period first-hand, and partially exoticizing, aimed at those young enough to find this recent past a slightly foreign country.

It’s not easy to do well. At their best, such narratives can uncover possibilities and dilemmas in the recent past that we have not resolved, however much we have become sensitized to them. At their worst, such narratives are complacent, mythologizing the past with seductively nostalgic allure while smugly lecturing us about what we already all agree were its shortcomings.

The intelligence of The People v. O. J. Simpson is rooted in the deftness with which it avoids the latter trap. First, it is not quite “prestige TV.” The critics that initially ridiculed it have clearly become used to the super-tasteful sheen and emotional earnestness of that genre. The People v. O. J. is candy-colored pulp, not above playing for jokes, and has no glamour. The taupes and pastel pinks of its sets; the lime green and pale yellow shirts; the wide, baroquely patterned neckties; the beige-toned sofas, bloated French Country furniture, and boxy, disposable-looking cars—all of that mid-1990s ephemera seems cheap even when it’s expensive, and more than a little embarrassing, a bottle of Zima instead of Don Draper’s Old Fashioned. 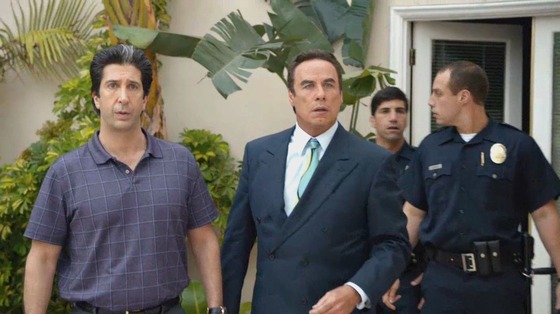 Its actors, who seem positively gleeful in their reanimation of the trial’s iconic figures, reflect the show’s inclination toward kitsch. There is David Schwimmer’s Robert Kardashian, a middle-aged ingénu among sharks; Alyosha Karamazov in a polo top; Connie Britton’s Faye Resnick, suggestively munching carrot sticks as a way of chewing scenery; John Travolta, out-Heroding Herod like never before as the beetle-browed Robert Shapiro; even Larry King, as surreally ageless as Queen Bess, playing himself. The two standout performances, Sarah Paulson’s Marcia Clark and Courtney B. Vance’s Johnnie Cochran, are figures of pathos and humor both; rather than riding history, they’re clinging to its flank for all they’re worth, hoping to end up on top rather than trampled.

all of that mid-1990s ephemera seems cheap even when it’s expensive: a bottle of Zima instead of Don Draper’s Old Fashioned.

By refusing to take itself seriously, by not seducing us with solemnity, the show manages to be far more adept than its peers. It doesn’t traffic in grand secrets or tragic revelations, but in a world of crazy happenstance, tangled contingencies, ridiculous impostures. That, as it happens, is its second virtue: the focus on the small scale, the fidelity to slippery feeling over narrative momentum. It isn’t too much to say, in fact, that Simpson’s guilt or innocence is the show’s MacGuffin, the ultimately irrelevant plot motivation that occasions the narrative’s truly important business. What emerges into a sharp foreground isn’t any tantalizing mystery, but what we now call microaggressions: the places where structural inequities lurk under behavioral norms. The camera lingers on cruelly appraising glances and wounding offhand remarks, on a cashier’s comments as Clark buys tampons, on a traffic cop’s impassive face as he handcuffs Cochran for a minor violation. No small part of the show’s visual wit is its emphasis on fences, doors, barriers between bodies. Each of the major characters—Clark, Cochran, Chris Darden—has an essentially private understanding of what it means to live in their skin, one that they can share with others only indirectly.

They are much more capable of sharing their senses of incomprehension and incommensurability. The look of shock on Clark’s face when Darden tells her “a lot of black people think he didn’t do it” in the third episode is one of the show’s many stagings of incompatible realities—entirely different truths, coexisting at the same moment. Often that clash of realities is delivered through the show’s cunningly disrespectful choices of period music. When Mark Fuhrman (played with calm menace by Steven Pasquale) enters the courtroom for the first time, what ushers him in is the famous cimbalom of Portishead’s 1994 early trip-hop masterpiece “Sour Times.” More than just a witty verbal comment, this is a brilliantly perverse juxtaposition—the downtempo theme music to countless lounge bars of the mid-’90s, and the confident strut of the trial’s famous racist cop. It’s thrilling, and verges on uncomfortably erotic. It’s also just weird, the idea that two such things, two such worlds, coexisted, unaware of each other except in the collision staged by the show. A heavier hand might have inserted a riff from “One in a Million,” Guns N’ Roses’ notorious late-’80s white-boy anthem, instead; but the show is interested in collisions, not confirmations. Careful historical reconstruction of interiors and costume and music is a difficult art that usually has a simple rationale: to seduce you with the past’s allure, or to underline characterizations. Not so here, where the reconstruction exists to unsettle, to ironize.

A “history of the lights and shadows,” George Eliot called it—the almost impossible-to-conceive collectivity of distinct lives and perspectives, which only becomes apparent in retrospect. One thing The People v. O. J. suggests as the lesson of its history of lights and shadows is that its moment wasn’t, as has often been said, when a common culture frayed; it was instead the collective moment when everyone began to realize there never had been a common culture. If we’ve inherited that realization, we certainly know no better what to do with it.