The Taming of the Bard
We still take our Shakespearean directives from London, and this year’s news has been welcome: it was the summer of women and Shakespeare. The long reigns of Artistic Directors Mark Rylance and ... 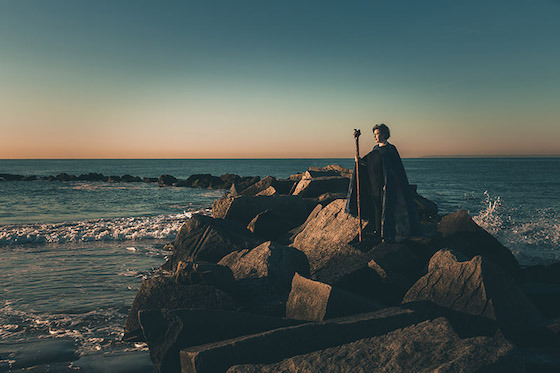 We still take our Shakespearean directives from London, and this year’s news has been welcome: it was the summer of women and Shakespeare. The long reigns of Artistic Directors Mark Rylance and Dominic Dromgoole at Shakespeare’s Globe have ended, and with them went the pursuit of “original practices” that left female performers out of the company’s signature all-male productions.

This past summer, the Globe welcomed its first female Artistic Director, Emma Rice, whose arrival heralded a new set of ideals. Rice comes from Cornwall’s Kneehigh Theatre, where she made her name with postmodern adaptations of beloved classics like The Red Shoes, Brief Encounter, and Rebecca. Her inaugural season at the Globe featured her own production of A Midsummer Night’s Dream and a newly commissioned Taming of the Shrew. This Shrew, directed by Caroline Byrne, has an Irish setting and stars Aoife Duffin, the talented Irish actor seen this spring in New York in A Girl Is a Half-Formed Thing.

There’s a certain grim irony in the alliance between feminist Shakespeare and The Taming of the Shrew. It has, in recent years, been the Shakespeare play most frequently staged by all-female troupes. It’s also the Shakespeare play that treats women most egregiously, a play in which a husband subdues his new and unwilling wife by depriving her of sleep and food until she submits to his whims and even agrees to call the night the day. Last year, Shrew was the inaugural play of the Manhattan Shakespeare Project, the city’s only all-female Shakespeare company. Perhaps The Taming of the Shrew so often falls to all-female casts because its misogyny demands a feminist response. It belongs to a set of plays by men—Lysistrata, Antigone, A Doll’s House, A Streetcar Named Desire—that stage the workings of patriarchy so thoroughly that they have become feminist theater labs. 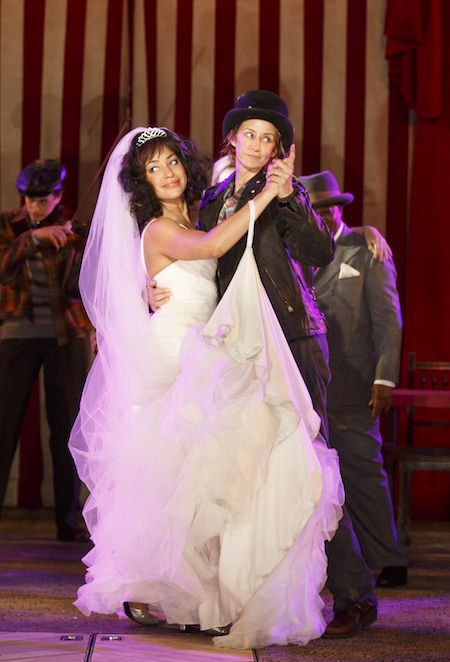 Cush Jumbo as Katherine (left) and Janet McTeer as Petruchio (right) in the Public Theater’s summer production of The Taming of the Shrew. Photograph by Joan Marcus

Phyllida Lloyd, the British director, helmed the first all-female production at the Globe with Taming in 2003. Lloyd’s production was on stage this May and June as part of the Public Theater’s summer season in Central Park. Her Taming takes some tips from Sarah Waters’s lesbian historical novel Tipping the Velvet by inflecting performances with the frisson of breeches parts in which women play men’s roles in male dress. Her performers recall the heyday of Annie Hindle and Vesta Tilley, 19th-century actors who pioneered drag-kinging by wearing male clothes and inhabiting aggressively masculine manners.

The Public’s Central Park production features Janet McTeer, who played Petruchio in Elizabethan dress back in 2003. At 6’1”, dressed this time in leather jacket and cowboy boots, McTeer inhabits the part with an irresistible combination of comic detachment and genuine swagger. When she turns her back on the audience to relieve herself against a tree, she gives Shakespeare’s usually cringe-worthy codpiece humor a subversive edge. McTeer fills the stage with bro-ish posturing and carefully selected lewd tongue gestures. She doesn’t overplay juicy lines like “And do you tell me of a woman’s tongue?”—but she doesn’t let them get away from her either. As McTeer also proved in her Academy Award–nominated performance opposite Glenn Close in Rodrigo García’s film Albert Nobbs (2011), she is a wonder in breeches.

The ensemble at the Delacorte is strong. Cush Jumbo as Katherina has the toughest task: keeping the play in comic terrain while bearing the increasing assaults of her husband. In the second half, she achieves this by veering between seeming defeat and occasional outbursts. At the final wedding banquet, she dons a pretty yellow ’60s-era prom-like dress for whose possession she had earlier scrapped violently with her husband. Wearing it, she seems perfectly attired for the submissive role he demands, and it looks like we’ve lost her to Stepford Wifehood for good—until she prostrates herself before Petruchio, lying down flat on the floor like a subject before a sovereign. Her submission is so theatrical that it tips us off to the cathartic return of her will. Like most modern-day Kates, Jumbo’s ends the play by recovering her unconquerable independence, but she pays for her rebellion with an unceremonious final exit—tossed down a trapdoor by the patriarchs at the feast.

Perhaps “The Taming” so often falls to all-female casts because its misogyny demands a feminist response.

Both Jumbo and Gayle Rankin (who plays Kate’s younger sister Bianca) begin the show in doll-like clothes that accentuate the difference between male and female parts, which helps make the women in men’s clothes seem more masculine. Lloyd’s Taming opens with a faux beauty pageant designed to establish the frilly femininity of the much-pursued Bianca. The production’s set is a series of tumble-down circus tents and trailers that look discouragingly threadbare when one arrives for the performance but acquire a disco sparkle as darkness falls and the lavish lighting design kicks in. The pageant and circus motifs draw the audience’s attention to the theatricality of gender performance, but most of the female cast members approach their male parts naturalistically and don’t draw attention to the margin between their costumes and their bodies. Wearing bulky suits and speaking in low registers, for long stretches of the production they make the audience forget that they are women.

As Gremio, Judy Gold brings big laughs when she comes downstage at the play’s midpoint to deliver an interpolated monologue that mocks both Donald Trump and Shakespeare. “Petruchio is supposed to have a speech about the wedding banquet here, but it’s boring,” she declares, before taking over the stage with her Trump imitation. Donna Lynne Champlin as Hortensio proves an adorable deadpan clown with an accordion. The most zestful moment of the evening comes with the final bow when all the members of the cast open their shirts to reveal their bras and bindings. It feels like director Lloyd’s playful signature on the production.

While camping out for Public Theater tickets, I learned that in addition to the show at the starry Delacorte, New York audiences have been able to witness at least two other female-centered productions for free in borough parks this summer. In June in Carroll Park, Smith Street Stage presented The Tempest with a female Prospero, and in Astoria Park (and a few other stops around the city), the Manhattan Shakespeare Project has been staging “الأخرى Al’ukhraa (‘The Other’): A Study of Othello” featuring the teenage actors Mouna R’miki and Gareth Tidball (the show came to Morningside Park July 14–17). Taking a community theater approach with Al’ukhraa, The Manhattan Shakespeare Project production also takes aim at Donald Trump: Artistic Director Sarah Eismann says that the show was conceived as a response to Trump’s calls for a “total and complete shutdown of Muslims entering the United States.” The company felt the need “to create a space for … girls’ voices to be heard” about “how the current political climate of fear is directly impacting NYC high school students.”

Beth Ann Hopkins, Artistic Director of Smith Street Stage, has recently discovered that gender-blind casting of Shakepeare’s plays allows her to get the best actors available. This season she is directing Kate Ross as Prospero in The Tempest, a role that Helen Mirren claimed in Julie Taymor’s 2010 film; since her 1999 Titus, Taymor has been a prime mover of feminist Shakespeare on film. Prospero is not so much a “breeches” as a cape-and-staff part; his character is less obviously gendered than Petruchio in Taming. Kate Ross, who plays Prospero in the Smith Street Stage production, describes the experience as “liberating”:

Prospero definitely has traits that are (stereotypically) masculine—pride, ego, supreme confidence, lack of empathy, rage. And I have had to work against some of my own instincts, particularly my maternal instincts. Prospero is a very different kind of mother than I am. I keep shying away from how selfish Prospero is … I have to admit that I enjoy the part of Prospero that just lets loose with rage and fury. It is liberating! “I will plague them all, even to roaring!” is great, great fun to say. Those are certainly non-gendered emotions, but I’m sure it is true that more male characters get to let loose in that way than female characters.

While adapting the script to the needs of their production, director Hopkins was surprised at how tricky it was to replace the word “Sir,” suggesting that “there isn’t a real equivalent that is only one syllable and has the same impact” (she ended up making use of a few variations, including “Ma’am,” “Lord,” and even “Mom”). Hopkins reports that aside from the occasional disappointment of male actors, the response to her casting practices has been entirely positive.

Featured image: Kate Ross as Prospero in the Smith Street Stage production of The Tempest. Photograph by Chris Montgomery