The Violence of Urban Vacancy
Houses without people, people without homes: New York has invested in empty storefronts and empty districts, even as most New Yorkers suffer. 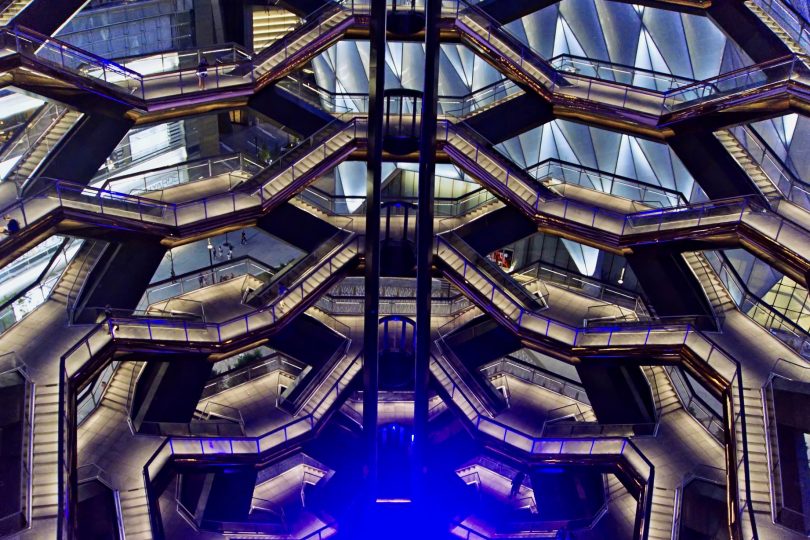 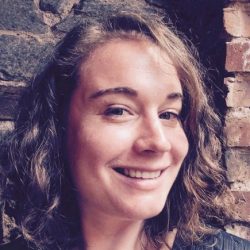 Hudson Yards—Manhattan’s most extravagant luxury development—is the product of investor’s spoils. Looming over the western edge of Manhattan, its anachronistic skyline was built by looting Harlem through a case of economic-development gerrymandering. Funds from a public program meant to aid urban communities harmed by disinvestment went into creating an urban experience too expensive for most New Yorkers. Legalized plunder and pillage, however, have created luxe spaces devoid of activity. Hudson Yards has failed to attract and keep tenants in both its residential and commercial spaces. As in other parts of the city, spiraling rents and landlords’ greed has meant many establishments cannot afford to stay put. Rather than reimagine the vacant city, developers can just sit on their loot, waiting out the crisis—the current tax code not only permits, but encourages emptiness through deductions and write-offs.

The massive urban development embodies a new urban status quo, that of vacancy. Vacancy reveals how the city privileges property over personhood, the real estate mogul over the overall well-being of the city or the neighborhood. It is the product of an urban-growth model reliant on property and sales taxes instead of comprehensive employment. Often incentivized through tax breaks, vacancy has become a symbol of misplaced municipal priorities.

The wealthy have long wielded property rights as a bulwark against change—from imposing height restrictions against densification to protect home values to using tax bills to fight school-integration efforts. Such rights, always extended on differential terms to nonwhite populations, are of the utmost importance, sacrosanct. Vacancy draws our attention to those exclusionary terms and opens a window for radical transformation.

COVID-19 and Black Lives Matter made the violence of vacancy undeniable. In New York, scores of tenants face substandard conditions and overcrowding, the homeless population continues to grow, street homelessness has skyrocketed since the advent of the pandemic, and thousands face eviction when local and national rent moratoria expire. Despite deepening housing precarity, much of the city’s housing stock continues to lie vacant, from the new Hudson Yards development to profit-seeking real estate investment to pied-a-terre apartments. The pandemic has brought the reality of the vast quantities of empty units on the one hand and overcrowding in outer boroughs on the other into sharp relief. During April and May, as COVID raged in dense immigrant neighborhoods such as Elmhurst, Queens, parts of Manhattan appeared to be dormant stage sets, devoid of much human life.

The new urban vacancy is produced through dispossession—city-sanctioned looting. Spindly towers line Park Avenue, while luxurious new malls entice shoppers at the World Trade Center and Battery Park, in addition to Hudson Yards. These developments geared toward property ownership instead of comprehensive growth dispossess urban dwellers of alternative, more secure economic futures—retail jobs where we might have industry, luxury housing where we might have mixed-use neighborhoods. It gobbles up land that previously held other uses—trendy hotels and prêt-à-porter where once there was meatpacking, skyrise housing on the site of an old recycling plant. Planners and the state justify such development because it might ensure tax dollars in perpetuity. Whether from homeowners or high-ticket goods, tax profits might finance a city starved for federal aid and stave off any future fiscal disaster.

Yet rather than produce abundant prosperity, the prevalent system of growth has created luxe emptiness while lining the pockets of real-estate moguls. New vacancy is endemic to a system that prioritizes real-estate greed over collective well-being, property rights over personhood. As other international cities such as Berlin and Barcelona toy with expropriation—to dispossess mega-landlords and banks of vacant buildings and fill them with low-income residents—in the United States we hear the constant drumbeat of property rights and, by extension, the rights of the wealthy to hoard, pillage, and exclude. Tax rebates and reinvestment efforts shunted toward luxury development instead of local improvements, public schools financed through property taxes, the defensive securitization of surveillance cameras, anti-homeless urban design, and spiked fences and walls all prioritize the interests of the elite over the well-being of any kind of collective polity.

Vacancy reveals how the city privileges property over personhood, the real-estate mogul over the overall well-being of the city or the neighborhood.

Instances where property is prioritized over life are certainly not new. Recent incidents include the murder of Trayvon Martin by George Zimmerman. Before the emergence and consolidation of BLM, Zimmerman’s crime was largely absolved as an act of one man’s efforts to protect his home. Several years later, as we sank into the despair and rage of the Trump era, a woman was killed by a white supremacist who plowed his car into counterprotesters confronting the Unite the Right gathering in Charlottesville. Despite the literal violence of death, many commentators and politicians praised law enforcement because the college town had sustained limited property damage.

Still, the hallowed rights to property remain fragile for BIPOC communities. A viral video in August 2020 showed a white officer violently arresting a Black woman on her own porch. Her crime: talking too loudly. A generation of Black and brown households has never recovered from the previous crisis of 2008. Then, predatory lending practices wrested years of equity from communities of color across the country. In turn, many people faced the threat of forced eviction, even while banks were bailed out. Steven Mnuchin, head of a foreclosure mill, became Treasury Secretary. Dispossession here was not merely the taking of property; it was the foreclosure of intergenerational transfers of wealth, the end of upward mobility through homeownership, and the extinction of once lively, stable neighborhoods.1 The refuse of 2008—the empty homes, the personal credit scores, the legacy of debt—reveals the hypocrisies of the propertied order. The prevalence of nuisance laws and broken-windows policing in which subjective notions of disorder and disturbance justify punitive state intervention further enshrine property and its attendant rights for a white minority.

Rage at this system has produced a variety of radical responses. On the first day of June 2020, exactly one week after the murder of George Floyd in Minneapolis, people took to the streets of Soho, New York, to break windows, spray graffiti, and grab luxury goods. Expensive handbags, vertiginous stilettoes, pavé watches, and gold-plated sunglasses had sat for months on their pedestals behind thick glass and steel bars, as the city all around was gripped by a pandemic. Such visual totems of excess and consumption were stark reminders of the entrenched inequality of the urban environment; as the rich fled to their summer estates, a low-income community largely of color continued to work under the guise of essential labor. 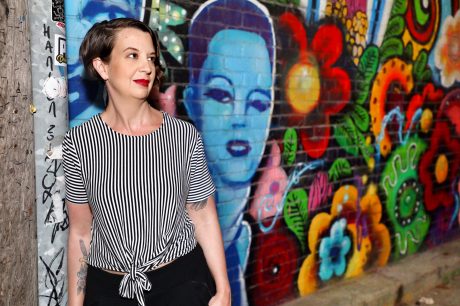 The news media seized upon the story of Soho’s plunder, as it came to symbolize criminality that went against the logics of the orderly consumer city and violated property rights, albeit for large corporations such as LVMH. According to many reports and the chatter of social and popular media, hooded thugs and greedy looters, enjoying their spoils, would thrust the city back into the dark, dirty days of the 1970s (in addition to undoing the strides of nonviolent Black Lives Matter protests). The glittering post-2001 urbanism of Bloomberg and then de Blasio—who failed to fulfill promises of police reform and housing affordability—would soon crumble into new ruins. The rich were fleeing, the ethnic rabble disgruntled, no longer in their “proper” place. But those so-called looters were in many ways mimicking similar processes of destruction and capture that have already hollowed out much of the city. Indeed, what was subprime lending but looting at a much more expansive and audacious scale, a form of what David Harvey calls “accumulation by dispossession”? Downtown destruction was a reaction to this historical geography of property and pillage.

While robbing stores temporarily disrupts the urban order, other practices seek more long-lasting change. Within this urban vacancy, many Black and brown communities—unduly punished by the propertied order—see a strategic political battleground that seeks to disrupt normative property systems. During fall 2019, Moms 4 Housing, an emergent collective of mostly Black homeless women, occupied several houses in West Oakland, an epicenter of homelessness amidst skyrocketing housing prices. The historically Black neighborhood has experienced increasing gentrification following displacement brought about in part by the foreclosure crisis. Identifying the disconnect between houses without people and people without homes, the moms flip the rights-based framework, this time deploying housing as a human right, which is enshrined in the Universal Declaration of Human Rights. 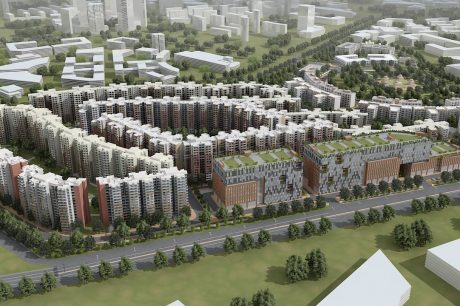 Stalling: How to Save the Global City

Grassroots urban movements and collectives such as Moms 4 Housing are not only concerned with finding housing. They force us to see the reality of the city, where urban development as usual is antithetical to just shelter, and to contend with the differential impacts of the propertied order. Property drives urban inequality, increasing the insecurity of historically marginalized communities through speculation and extraction. Recent debates over rent strikes, moratoria, and urban budgets reliant on property taxes demand a reckoning with dependency on private ownership as a means of financing and reproducing the city. To reimagine the city in the age of vacancy, therefore, collectives such as Moms 4 Housing might provide blueprints for an alternative urbanism of cooperation against the violence of the market.

As we contemplate urban emptiness, many prognosticators fret we will soon fall into a crisis similar to that of the 1970s. Already, NYC’s street homeless population has shot up, and crime numbers have increased. The city’s previous fiscal crisis, however, was caused by massive disinvestment and white flight. In our contemporary moment, urban success predicated on real-estate activity alone has paradoxically paved the way for urban crisis—a flourishing property market did not protect against crisis, instead producing new ruins. Boomtime urbanism privileged spectacle over holistic growth: the city’s first Neiman Marcus at Hudson Yards (now gone) instead of job training or small-business grants in Harlem, creating a landscape marked by deepening inequalities. As we teeter on the brink of uncertainty, new initiatives—mural art on boarded-up storefronts, the squatting of empty homes, emergent mutual-aid networks—help us imagine more inclusive forms of urban life.

An earlier version of this article misspelled the first name of “Steven Mnuchin” and incorrectly referred to “funds from a public program” as “public funds” and to “deductions” as “rebates.”