The War in the Air
The staggered beginnings of Kate Atkinson’s remarkable new novel, A God in Ruins, take a lurching upward trajectory, moving from earth to sky. Its fleeting prelude offers a glimpse of a Royal Air ... 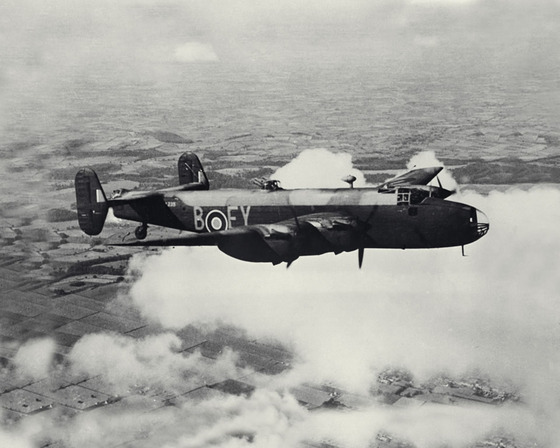 The staggered beginnings of Kate Atkinson’s remarkable new novel, A God in Ruins, take a lurching upward trajectory, moving from earth to sky. Its fleeting prelude offers a glimpse of a Royal Air Force Bomber Command pilot, Teddy, strolling a rural airfield before takeoff. What follows feels more like a proper opening chapter, as, moving back in time, we find Teddy as a child contemplating a different kind of aerial manoeuver: a soaring skylark, for which “quivering flight” and “the beauty of its music” are inextricably linked. The bomber pilot and the skylark offer twin figures for Teddy’s life before, during, and after World War II.

These dual figures also establish the argumentative thread of A God in Ruins, itself a curiously twinned text.1 On the outside, the novel is the tale of one man’s life, and the lives that intersect his—his parents, siblings, crewmates, wife, children. Inside this humble premise, however, A God in Ruins aspires to theorize the relationship between art and the incoherent violence of human endeavor. This tension plays out in an abstracted aerial battle, where the possible uplift of art is always at odds with war, which is, as Atkinson portentously figures it in her Author’s Note, “Man’s greatest fall from grace.”

Atkinson consistently figures art as a yearning, upward rush, which in its finest moments can inspire the human soul to flight. On leave from his squadron in London, listening to Beethoven’s utopian Ninth Symphony with his sister Ursula, Teddy has the feeling that

In her seat beside him, Ursula was almost quivering with the power of emotion, like a coiled spring, a bird ready to rise from the ground at any moment. Towards the end of the final movement, when the magnificence of the Choral becomes almost unbearable, Teddy had the odd sensation that he might actually have to hold on to his sister to prevent her rising into the air and taking flight.

Here we see that same desire to soar, to escape the earthbound limitations of humanity, that young Teddy felt watching the flight of the skylark. However, not all artistic ventures reach such heights of spirit, and for every soul-lifting aesthetic experience Atkinson narrates, another falters and crashes, like Teddy’s own career as a would-be poet. Furthermore, as is made evident by Teddy’s role heading missions to bomb civilian targets in the war, the longing to rise into the air is linked with more than just the desire to attain an aesthetic sublime. Teddy’s war offers an alternate vision of what “rises into the air” as he and his crew soar over the “medieval apocalypse” of Hamburg ablaze:

The smoke and the soot of the fire had risen up to meet them thousands of feet in the air. And the something else, something that Teddy would never forget, something he could never talk about—the smell of burning flesh rising from the pyre.

He knew then in his secret heart that one day a reckoning would come due.

Air here is the element of both art and violence, at once modern and primeval, in the fleeting image of the sacrificial pyre. The sky is consistently figured as a troubled medium throughout the novel, in which air war renders beauty and horror inextricable: a nighttime raid over Germany is an ethereal and terrible light show as, “everywhere there was the enchanting twinkling of white lights as thousands upon thousands of incendiaries rained down on the city,” and an aerial collision becomes a blazing pas-de-deux as two planes gently spiral “down to earth, almost balletic in their fiery fall.”

This argument between the perfectibility of art and the imperfectability of man takes off from questions that Atkinson opened up in her last novel, Life After Life (2013), to which A God in Ruins offers an intriguing “companion,” rather than sequel. In Life After Life, Teddy’s sister Ursula lived her life over and over again, playing out a metafictional variation on Nietzsche’s theme of eternal recurrence. Instead of the “affirmation of life” that Nietzsche imagined via pure repetition, Ursula’s multiplied stories asymptotically strive for a kind of unattainable correction in which each new life rewrites the fatal errors of its previous iterations.

Where Life After Life’s narrative acrobatics worked through the possibilities of action and change, A God in Ruins drifts more meditatively through the unchangeable, whether in the storied immortality of the artwork or the wearying inexorability of quotidian life. In Teddy’s case, flight is framed as an attempt to rise above the latter. Upon news of Britain’s entry to the war, Teddy joins the RAF, his initial desire to fly on the wings of artistic pursuit swapped out for a Halifax bomber. In either case, flying offers an escape from the limitations of social convention. “He was about to be freed from the shackles of banking. Freed too, he realized, from the prospect of suburbia, of the children who might turn out to be ‘rather dull.’ Freedom even from the yoke and harness of marriage.”

The escape from the conventional timeline that Teddy refers to here also gestures to the novel’s concern with human temporality. Atkinson’s true medium is time, and her best books are laboratories for her curiosity about how characters and readers swim through it, or are frozen in it. Surely it’s not coincidental that her novels proliferate in untimely deaths by water. A God in Ruins takes these concerns to the air via its specific questions about aesthetics and responsibility; here, the sky becomes a space where human time dissipates and circulates eternally. On one hand, this plays out in the imagined timelessness of the artwork; one of the claims that the novel debates internally is the idea that “when all else has gone, Art remains.” On the other, though, the novel invokes the hauntingly eternal present of never fully forgetting one’s past sins—here, we might recall Teddy’s premonition that “one day a reckoning would come due.”

That reckoning is always nigh in the novel, for both the pilot and the skylark are dogged from the outset by a third figure of flight, art, and the fall: Icarus. Looking for the disappeared lark in the novel’s early pages, young Teddy “thought of Icarus and wondered what he would have looked like from the ground … But Icarus was a myth, wasn’t he?”

The novel’s answer is clearly no. Icarus, all too real, will always fall into the sea. To the pilot’s eye, and Atkinson’s, the sea is a frigid mirror to the sky, where time accrues rather than dissipates, a parallel space of aesthetics and death, a “graveyard … the sea-bed littered with the rich and strange.”

Despite this sense of inevitability, the novel ends somewhere between sea and sky, leaving readers unsure if they’re rising or falling. Can the uncertain buoyancy of art possibly offer any counterbalance to the inexorable gravity of war? As in the image of falling Icarus, we see shades of W. H. Auden here: does art make anything happen? Of course, this is an unresolvable question, one that Atkinson wisely refrains from answering. The only thing to do, perhaps, is what the novel’s last line implores: to lift our eyes from the page to the swarming air, the rich and strange atmosphere of ideas and temporalities into which the novel’s plot ultimately evanesces, and—for just a moment—“please stop reading now.”

A God in Ruins